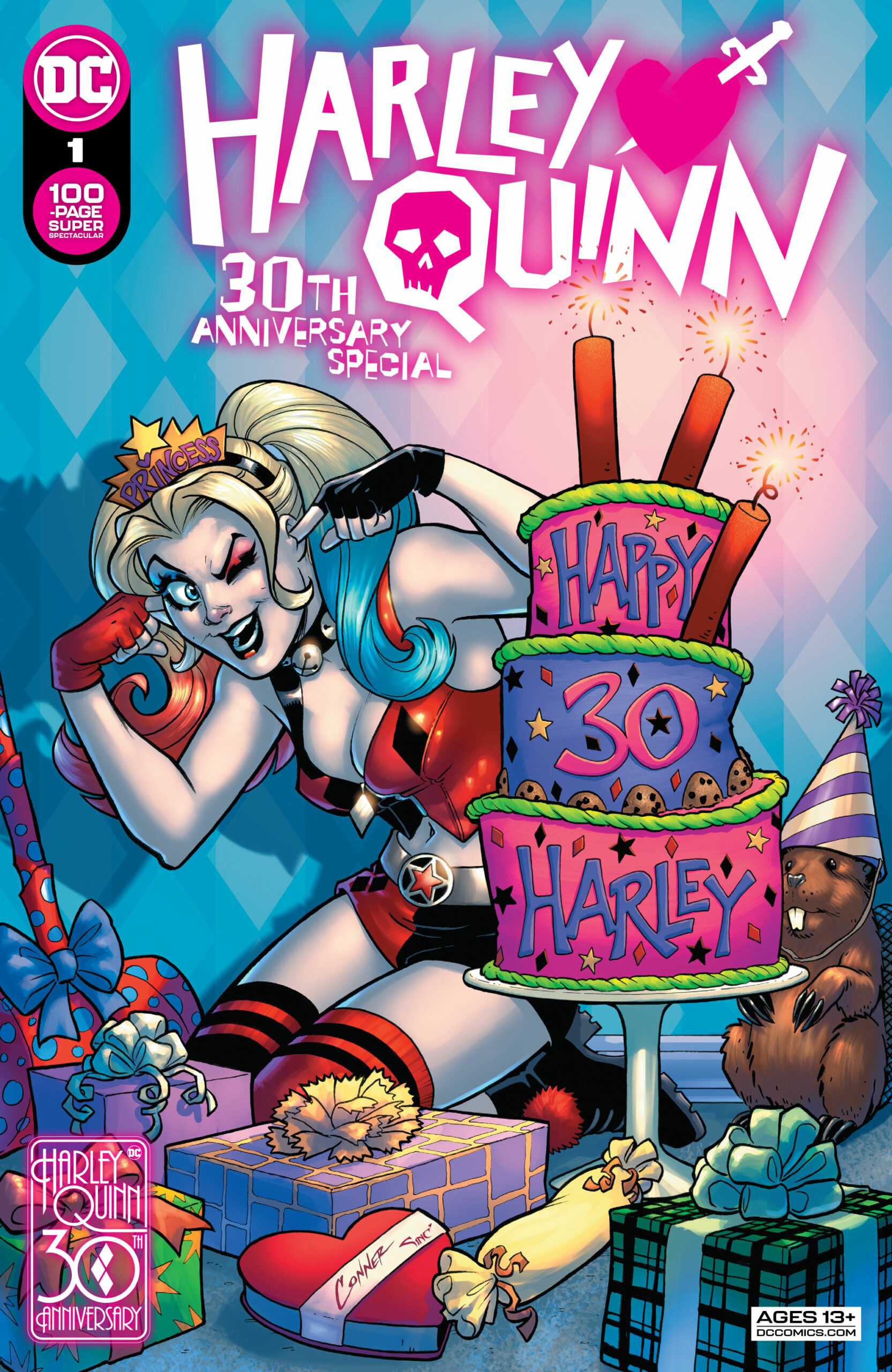 The Harley Quinn 30th Anniversary Special is a veritable smorgasbord for any fan of Harley Quinn. Personally I didn’t make it past the covers and credits before my face split from utter joy. The talent on board for this special casts a familiar and almost nostalgic shadow of characters and legendary creative talents from the adventures of Harley past.

Each of the teams on board for the Harley Quinn 30th Anniversary Special has given their passion and excellence in order to revisit our Jester Queen for her 30th anniversary. Every story’s a moment in time filled with the love and madness of the creators. So, let’s join them in their masquerade of insanity headfirst. 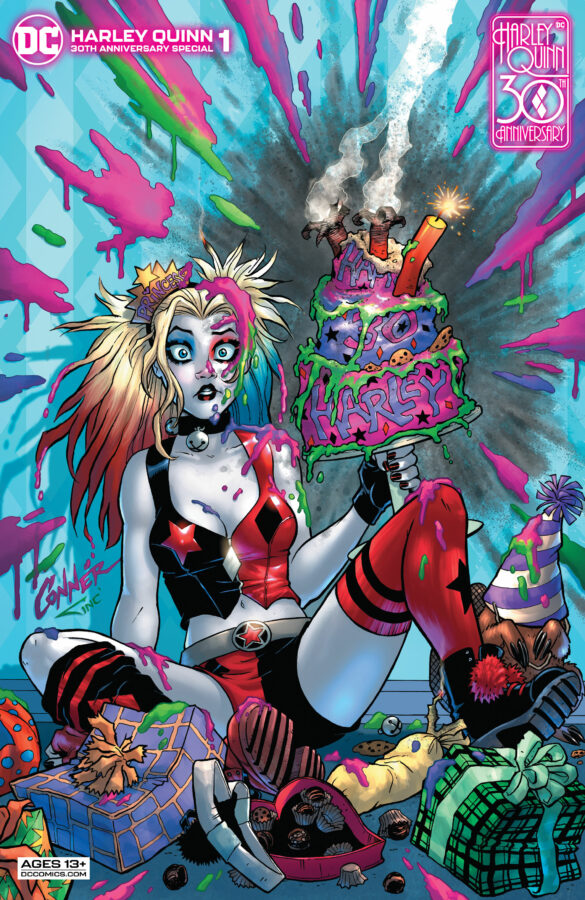 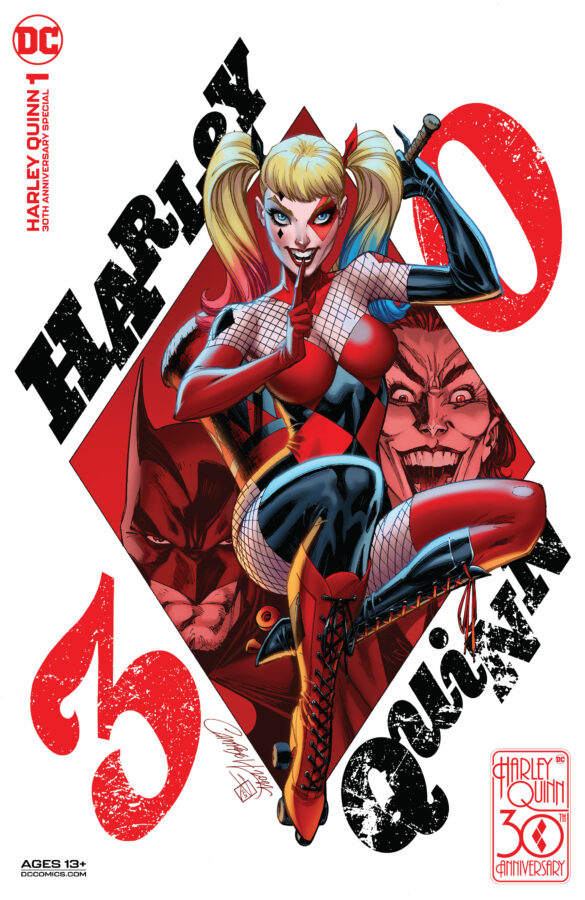 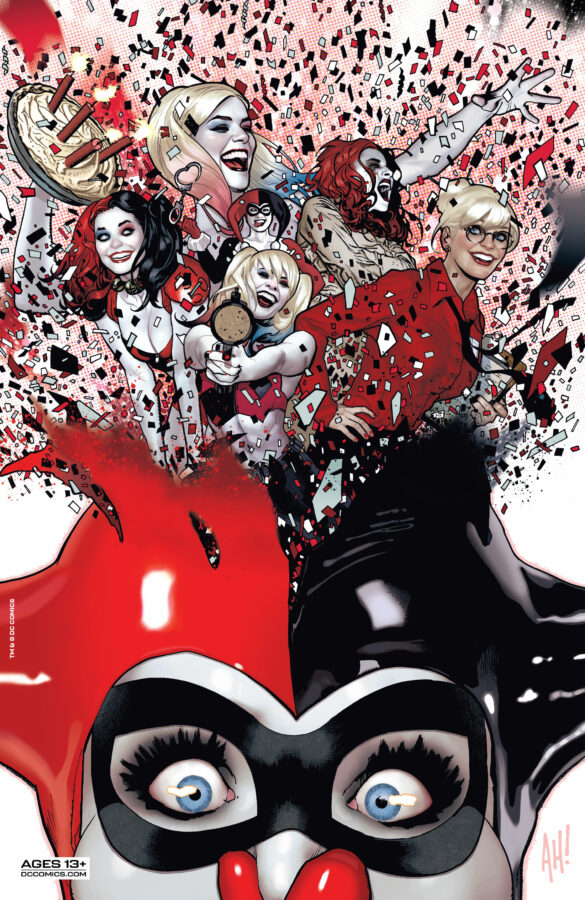 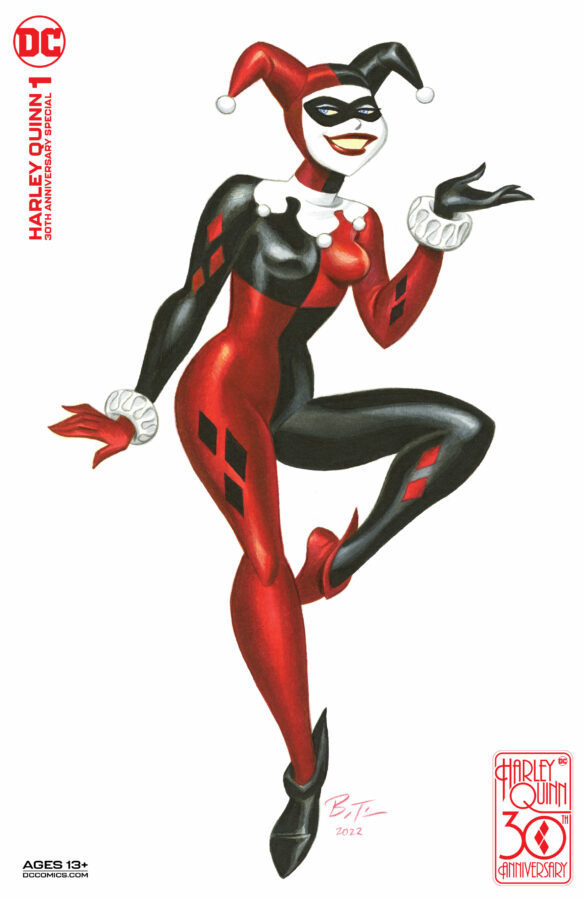 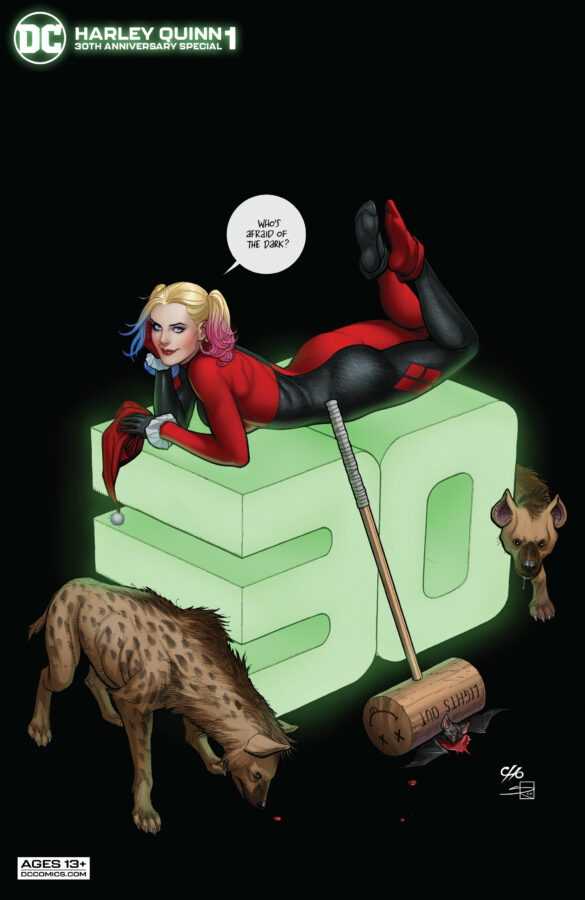 When I said I didn’t even make it passed the covers without cracking a smile, intense joy is probably more the correct way to describe my emotions. There’s such amazing art on the covers alone, and seeing Harley through those who have helped bring her to life is an honor. Since there are so many choices to select from, let’s spend a moment here.

Did your head spin? Because those are just the artists on the covers, each of which is a prize in itself; multiple exquisite shades of Harley with ample choices between mischief, siren, goddess… and so much more.

Into The Thick Of It

The Harley Quinn 30th Anniversary Special is an anthology, so let’s break down the stories one by one.

“Uncommon Bonds” is our first tale. Written by Amanda Conner and Jimmy Palmiotti with art by Chad Hardin, colors by Alex Sinclair, and letters by Dave Sharpe. In it we find Harley repaying Alfred a favor by helping him keep out robbers who have their eyes set on Wayne Manor. Will Alfred rise above the sniffles to tango with Harley against the intruders? 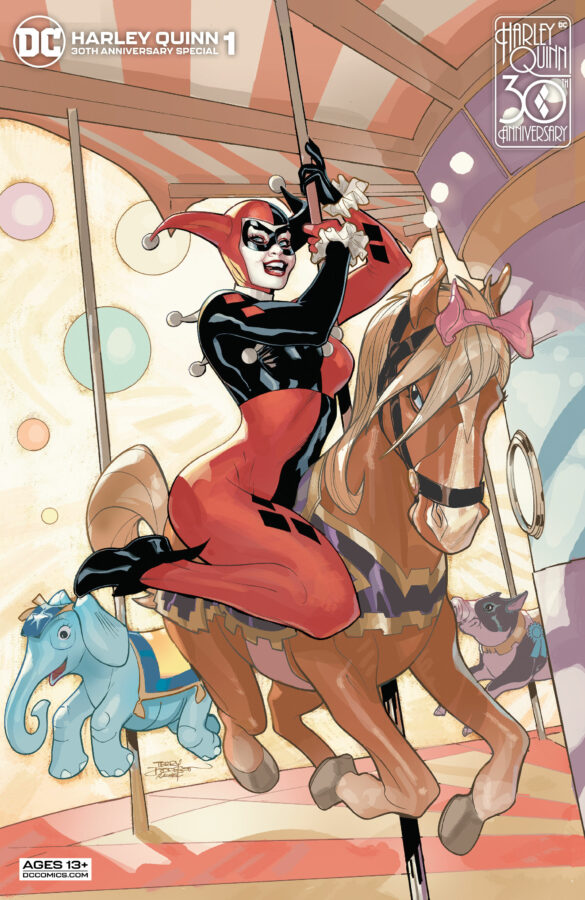 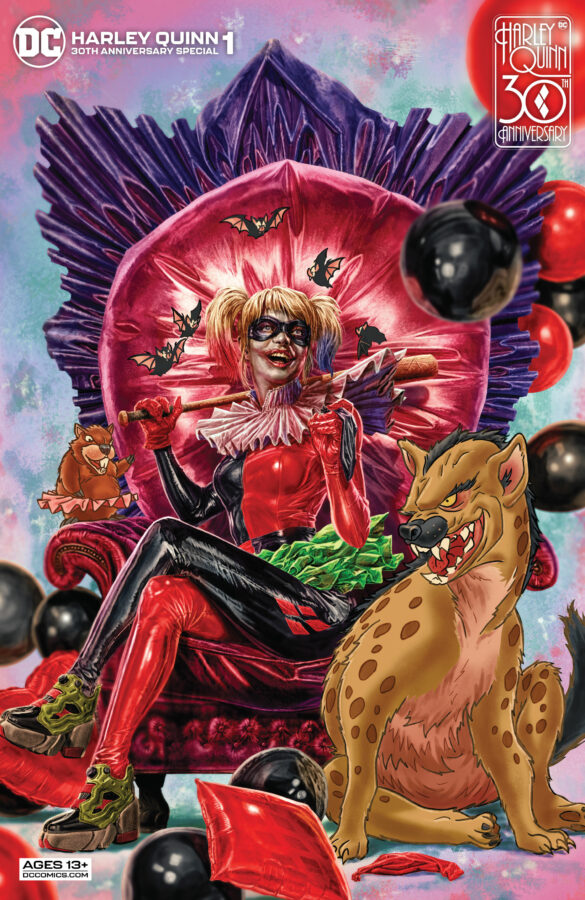 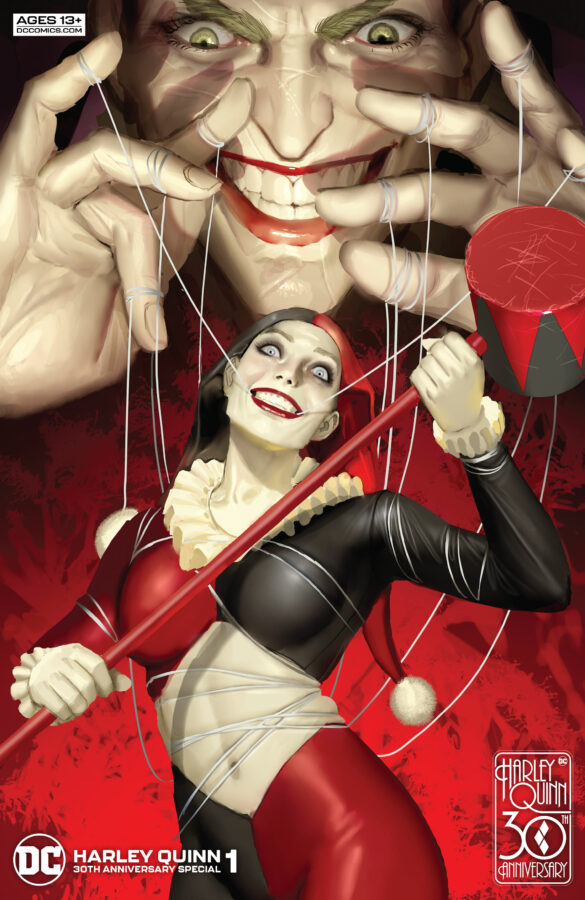 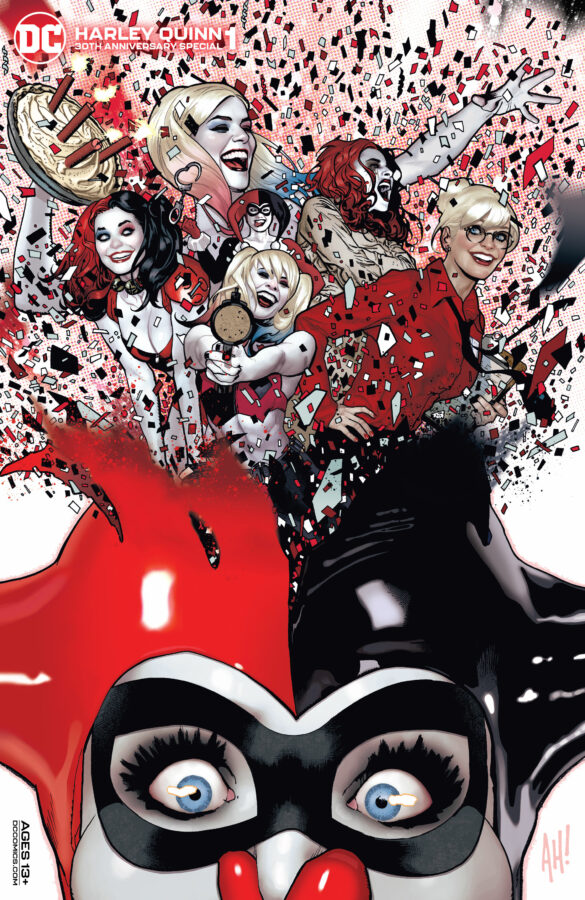 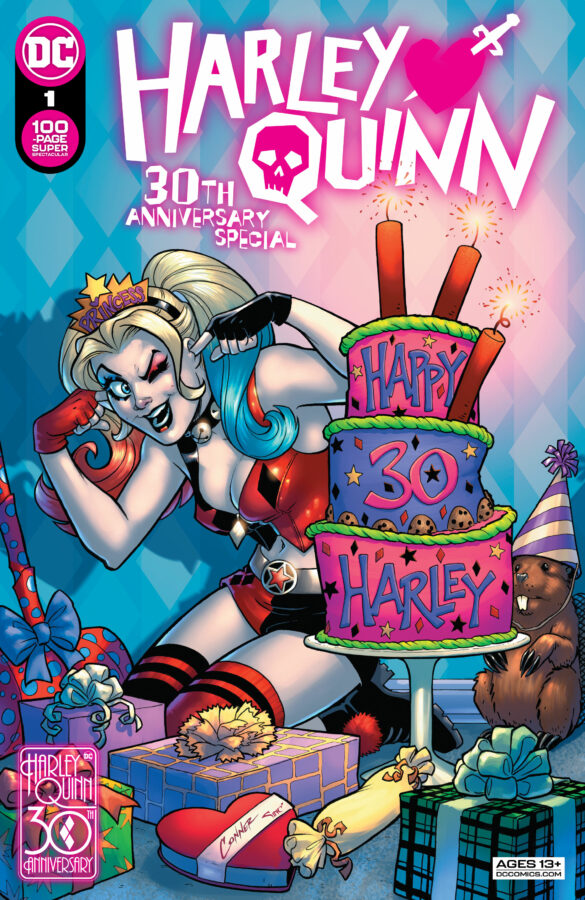 The next tale “Cease and Desist” comes from writer Rafael Scavone with art by Rafael Albuquerque, colors by Marcelo Maiolo, and letters by Josh Reed. Harley finds herself on a mission with a new member to the Suicide Squad, Fifteen. As they sneak onto a base looking for explosives, they find more than they bargained for and more than what was in the brief. Will they make it out alive?

“Submissive” is a present from writer and artist Stjepan Šejić with Pat Brosseau handling the letters. Having been a massive fan of the Harleen series, this was an absolute fangirl moment that I’m unashamed of. In the story, Selina (Catwoman) Kyle’s trying to goad Harley into snapping out of the toxic relationship that held her submissive to her “Puddin'” and Harley takes the bait. As an overachiever, however, has she gone too far, this time?

In “How To Train Your Hyena”, the former Harley Quinn monthly team of writer Stephanie Phillips, along with artist Riley Rossmo, Ivan Plascencia on colors, and AndWorld Design on letters, give us a rescue mission… or is it a reunion? Either way, Harley and Kevin find themselves searching for Bud and Lou, but they’re not the only ones on the hunt.

Another rare treat comes to us in the form of “Criminal Sanity”, by the team that brought us Joker/Harley: Criminal Sanity. Writer Kami Garcia is once again joined by artists Mico Suayan and Jason Badower, colorist Annette Kwok, and Richard Starkings and Comicraft’s Tyler Smith on letters. This dip back into the world comes with Harley still helping the GCPD, while searching for Edie’s killer, as well as a new murderer on the scene. There’s also a promise of a whole new story to amp up reader joy! 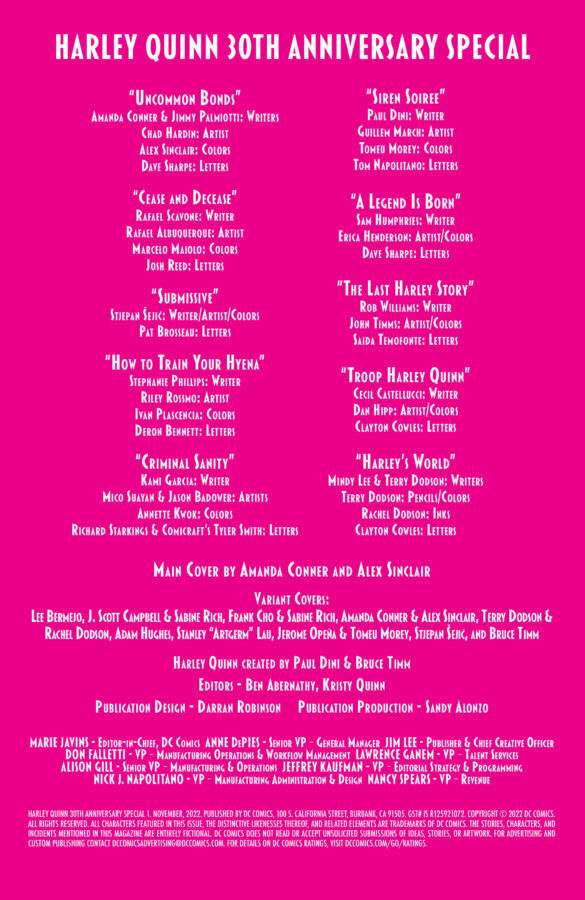 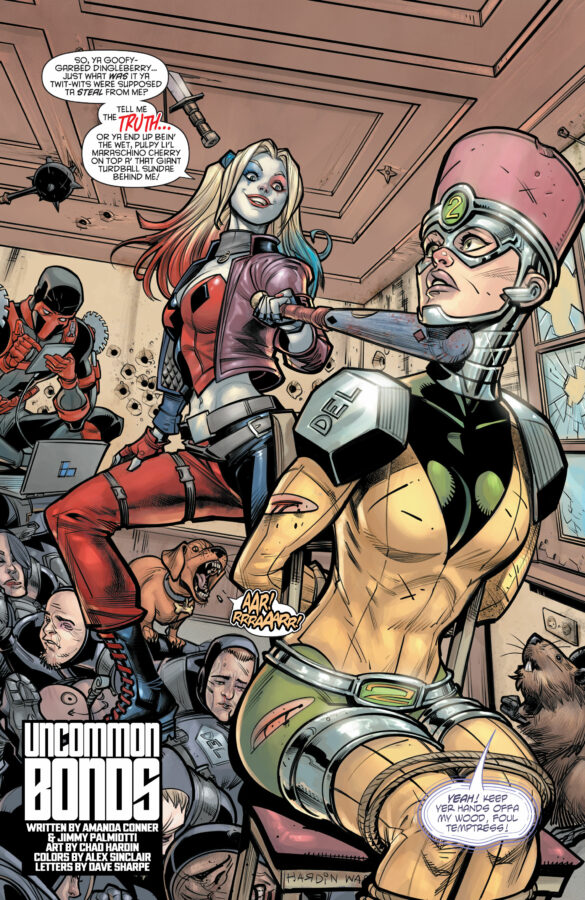 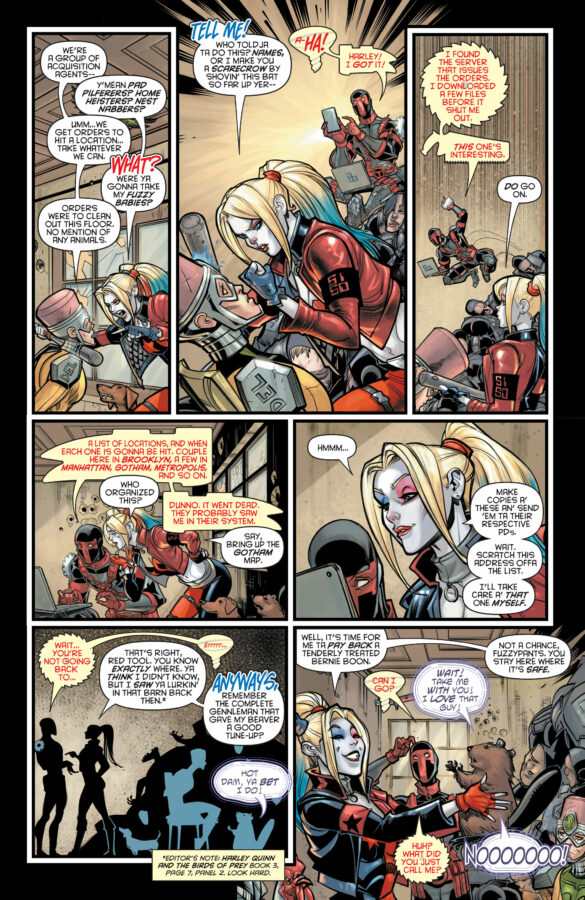 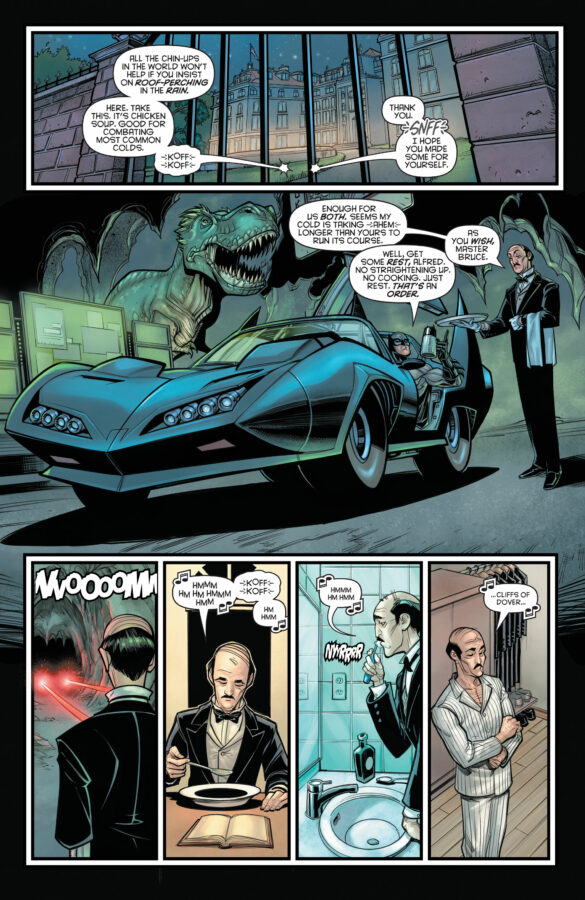 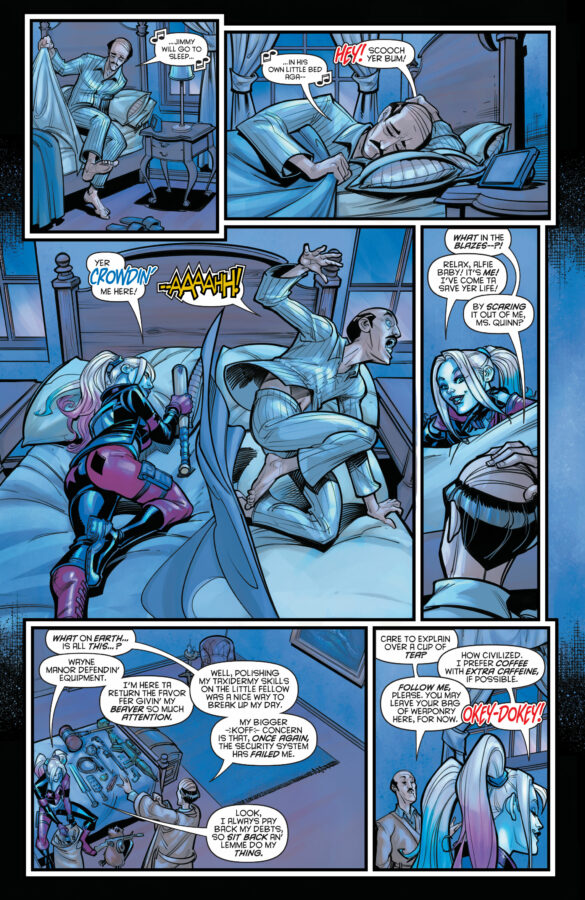 In “Sirens Soiree” Harley’s talked her roommates Selina and Pam into a housewarming party. Written by legend (and Harley’s co-creator Paul Dini, with beautiful art by Guillem March, colors by Tomeu Morey, and letters by Tom Napolitano, this party invite is for one and all. The gals are definitely in for a wild night!

“A Legend Is Born” is a step back into the past for me as a reviewer. Way back in time (09/22/2018, to be exact) I picked up my first Harley Quinn ongoing series book to review for Dark Knight News. That review was for Harley Quinn #50, by writer Sam Humphries. This was my first ongoing series as a reviewer. With this new tale Sam Humphries again shows his writing chops and artist Erica Henderson brings delightful touches with her art and colors. Dave Sharpe completes this dream team on letters and is no slouch pulling off fun and imaginative letters.

While all of the tales so far have been mischievous and a bit fun, ” The Last Harley Story” written by Rob Williams, with art and color by John Timms, and letters by Saida Temofonte, sways away from that. Readers get a taste of what a final story for Harley might look like, as this tale pits her against Amanda Waller.

We Don’t Need No Stinkin’ Badges

Continuing along we get to a wackily drawn tale called “Troop Harley Quinn” written by Cecil Castellucci, with art by Dan Hipp and letters by Clayton Cowles. This one features Harley leading a troop of scouts and showing them they can fight against the normal by embracing themselves and the wonder of the world.

Last, but certainly not least in any sense of the phrase, we get the tale “Harley’s World”. Written by Mindy Lee and Terry Dodson, with Pencils and colors by Terry Dodson, inks by Rachel Dodson, and letters by Clayton Cowles, this tale is stunning. We get a glimpse into the mind of Harley as she’s locked away that gives a vivid and delightful version of how she views the world and the players in it. This delivers a stunning end to the anthology. 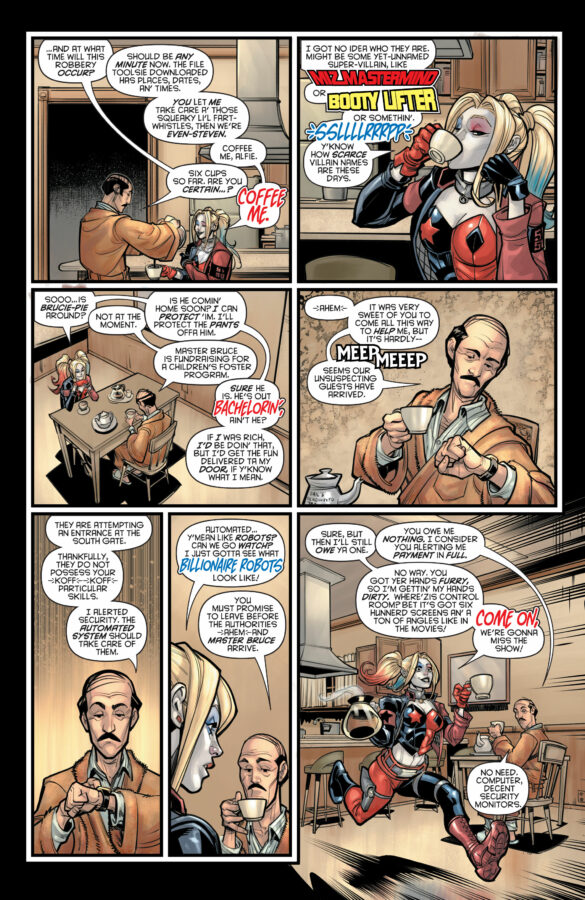 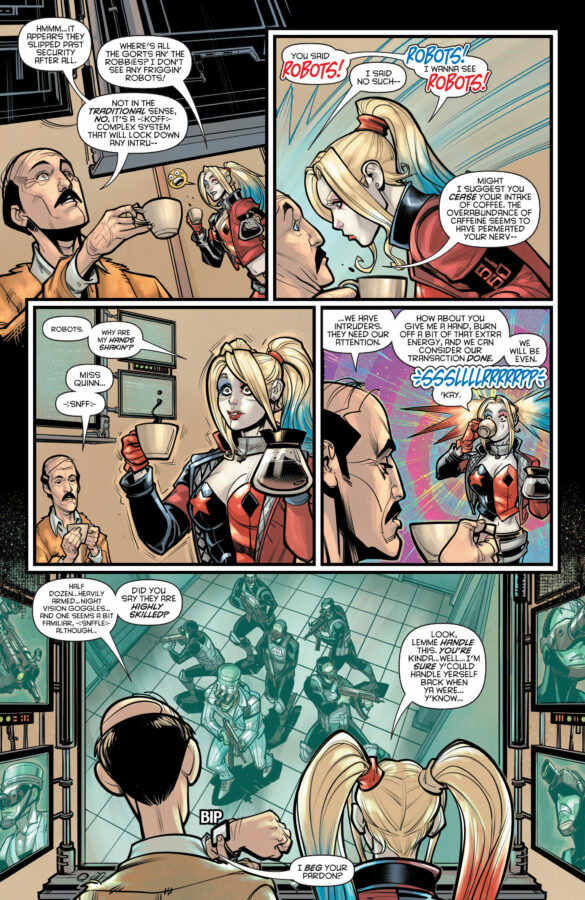 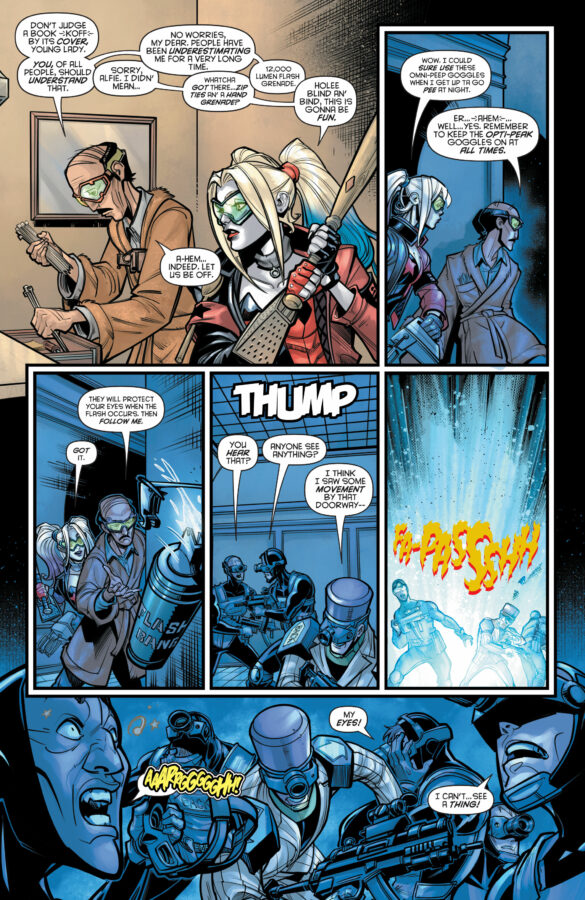 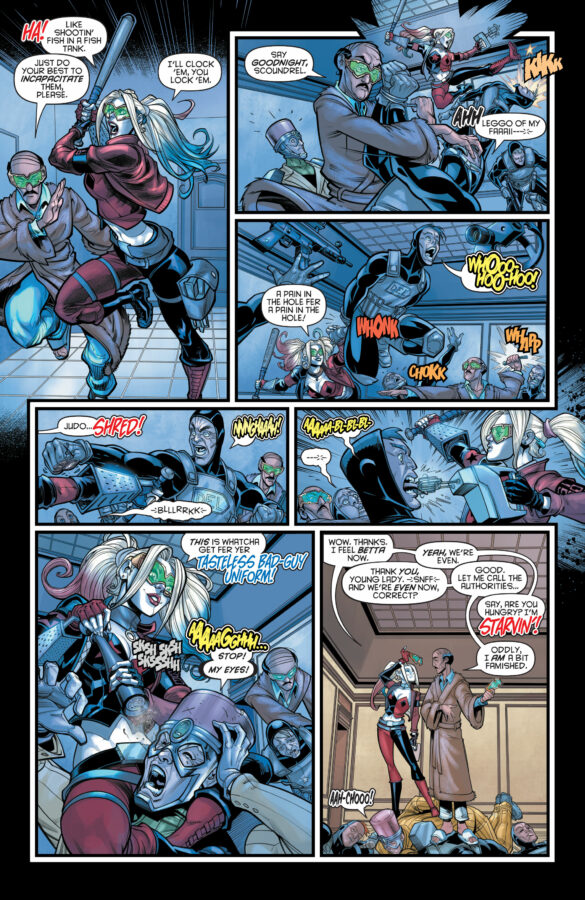 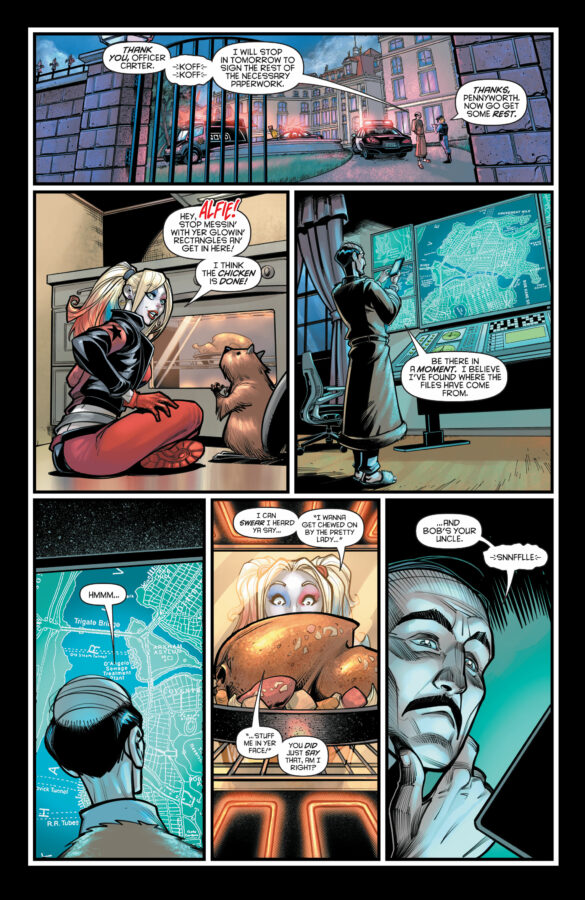 The Harley Quinn 30th Anniversary Special gives so many different drops of how Harley Quinn can be perceived and why she’s so important to her fans. No matter how you view her, there’s a story right up your alley in this impressive collection. Creatives that gave readers some of the best titles of Harley Quinn’s library have returned and provided us with more samplings from their respective worlds for Harley Quinn.

This collection of tales is a must for any fan of Harley Quinn and with the selection of covers to choose from, readers will surely find one that vibes with them. I personally am excited for the one done by Sabine Rich exclusively for NYCC! If you haven’t checked this one-shot out, the recommendation is to absolutely not miss out.