“First in War, First in Pieces” – Part Two: “Swift Vengeance”, “The Quick and the Dead” 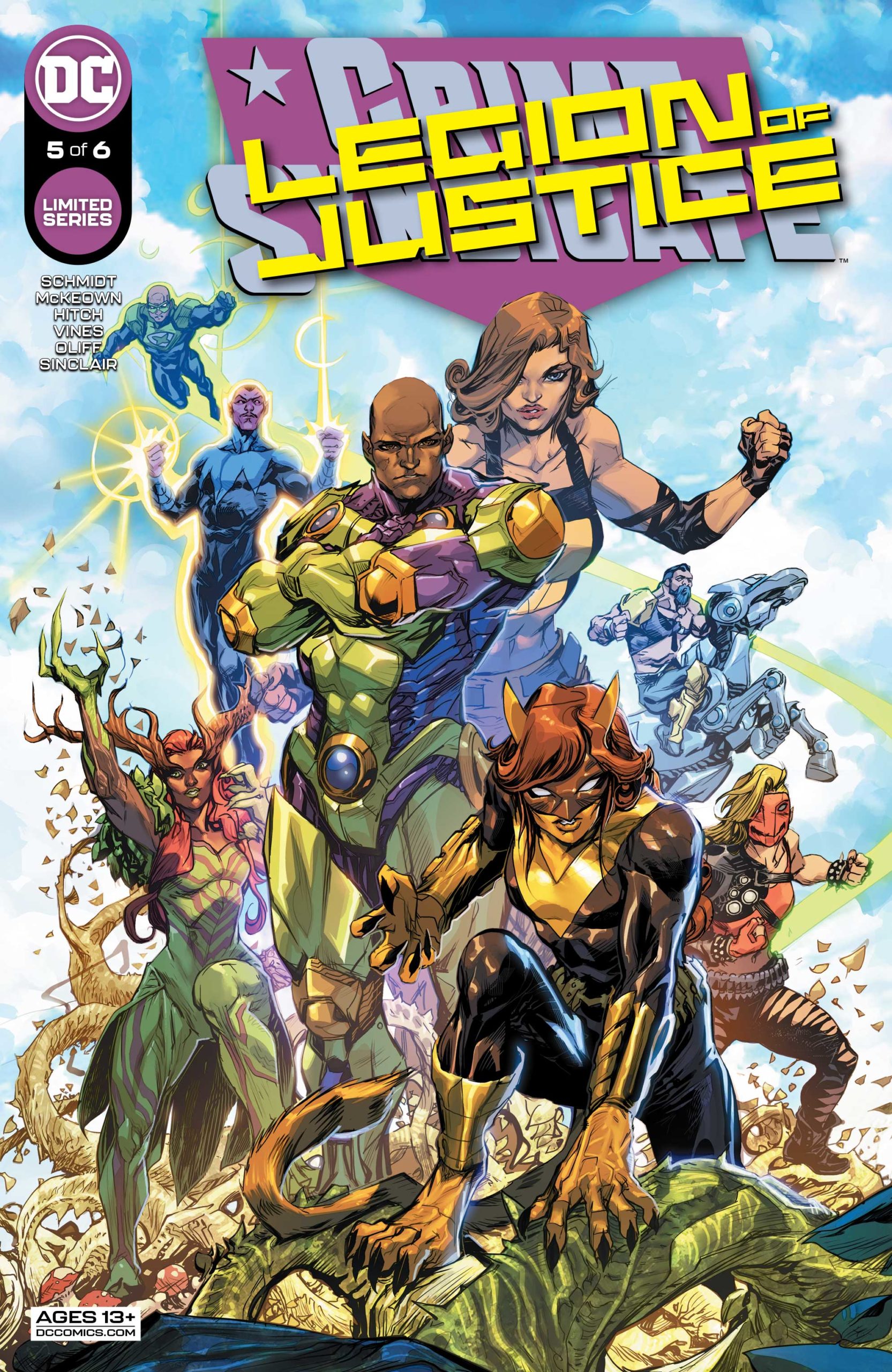 The penultimate issue is upon us and Crime Syndicate #5 makes way for the LEGION OF JUSTICE! After last month’s emotional story with the Emerald Knight, we step into the world of Johnny Quick! However, not only does this issue have to tackle Quick and the rest of the Crime Syndicate members, but a new team in the Legion of Justice. It’s a lot to take on for a single issue and the creative team nails it.

Crime Syndicate #5 does a great job at making this issue about Earth-3’s speedster, but without needing to feature him the entire time. While I had issues with the lack of Emerald Knight last month, Quick’s absence was never really felt. Now, that’s partially because he was the focus of both Lex Luthor’s Legion of Justice and Owlman’s Crime Syndicate. Saving Quick’s emotional beats for the backup story, Andy Schmidt was able to focus on introducing this new team organized by Luthor. With planting seeds for this team in previous issues, we’re not burdened with a setup like we had in Crime Syndicate #1.

John Stewart continues to be the star player for this series. His internal struggle to do the right thing is a highlight in this issue; especially when faced with Luthor’s righteousness. The dynamic between the Emerald Knight and both Luthor and Sinestro is fantastic and is worth exploring more.

The action in Crime Syndicate #5 is absolutely a blast. Kieran McKeown and Dexter Vines really brought it this month. Most of the issues I had with their work last time are gone; though there’s something I still don’t like about Superwoman and Ultraman’s heads. Everything else, including Owlman’s cowl, is back on track. It should also be noted, as I shamefully haven’t given enough credit in this series, that Steve Oliff’s work on the colors and Rob Leigh’s lettering is incredible. The fight with Quick and the big action scene at the end pop because of Oliff’s colors and Leigh’s lettering, as it gives the pages just the right amount of flair.

The Quick and the Dead

Very important content warning: This backup story deals with animal and child abuse. If you’re uncomfortable with these themes, I recommend sticking to this review and skipping the story.

If I’m being honest, my initial reaction to Crime Syndicate #5’s backup story, featuring Johnny Quick, wasn’t great. At first, it felt like the weakest backup story in the series. Then I sat with it, reread it, and then sat with it some more. It’s by far the most unique out of the bunch – the other stories take a lot of inspiration from their Earth-1 origins. More than that though, I’m meant to sympathize with Quick. Not that is out of the ordinary, just last month we had a sympathetic backup story with the Emerald Knight. The difference is that the Emerald Knight is being groomed to be a good guy; Quick takes the easier path to the dark side.

Bryan Hitch… what can I say? He crushed this backup story like he’s crushed every backup story before it. What I love about Hitch, and in turn, Alex Sinclair is the consistency. If anything, the art done in the day is the best it’s ever been; perhaps even better than the night scenes (for which I’ve thought Hitch excelled the most).

As we near the end of the series, I’m left realizing that I’m not going to have Schmidt’s words to read after next month. He’s taken what could have been just a mediocre limited series with cool moments and made it genuinely fun and interesting. If the good people at DC Comics are reading this, bust the door open past issue 6 and make this series an ongoing effort. Schmidt has just tapped the surface of Earth-3 and he’s been limited by space to tell this story.

Crime Syndicate #5 tells a lot of story in its few pages and sets us up for one heck of a conclusion next month. While it doesn’t hit all the same emotional beats of previous issues, Schmidt does present some dynamic relationships within the Legion of Justice.

As far as penultimate issues go, it’s hard to get much better than this.