“First in War, First in Pieces” – Part One: Emerald Light”, “Walls Closing In” 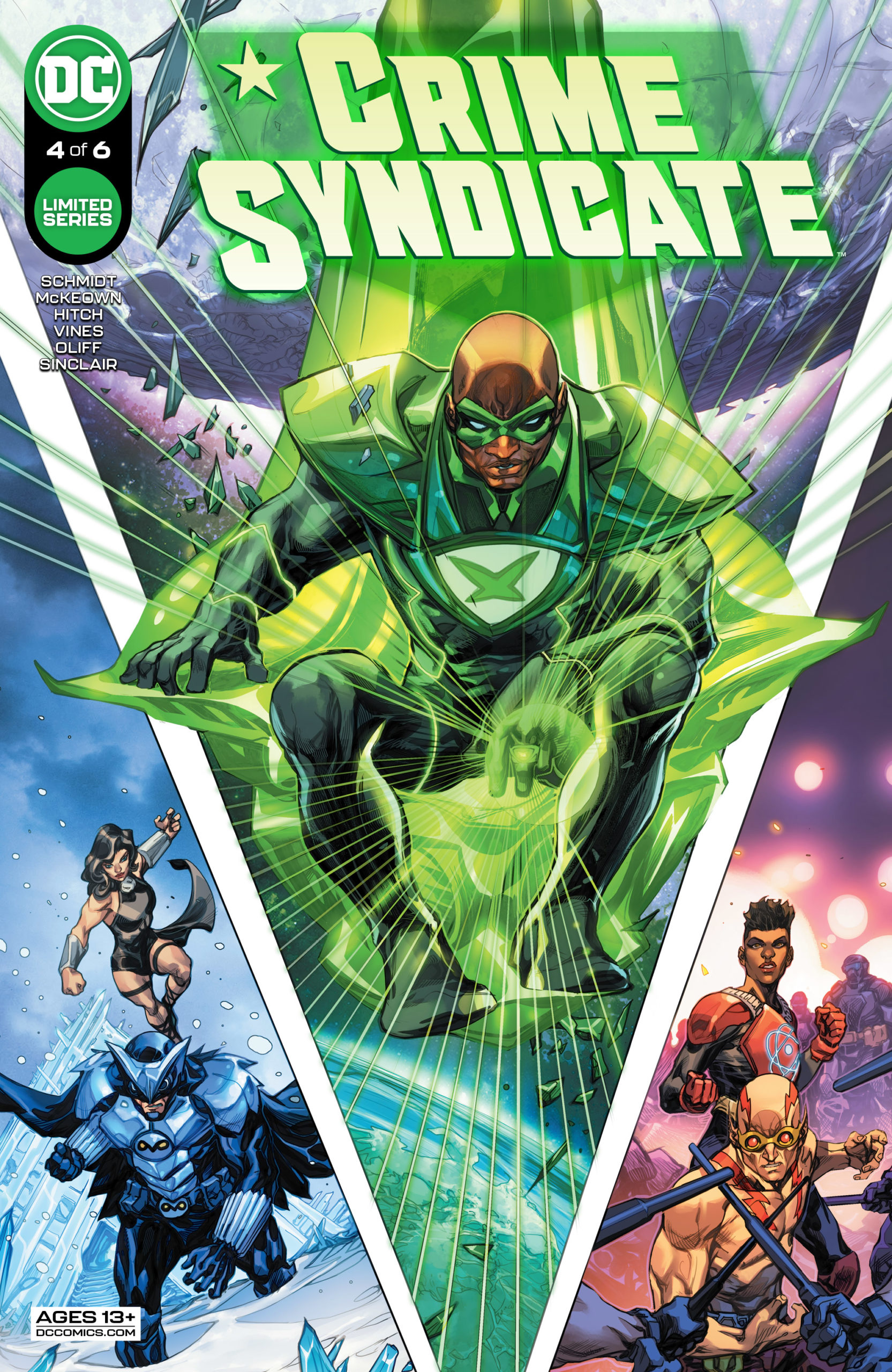 The Starro “threat” is over and Earth (3) now sees the Crime Syndicate as heroes… so, what’s next? Crime Syndicate #4 sets out to answer that question. I’ve been a fan of this series from the get-go, especially the backup stories. Aside from the first issue, the series has felt like a team book; though perhaps this month’s issue takes that a step too far and limits the Emerald Knight exposure, despite this being “his” issue.

While Crime Syndicate #4 is about the Emerald Knight, John Stewart, it reminds me of the current Joker series in that the focus isn’t on the titular character. For Crime Syndicate, a limited series and a team book, there’s a fine balance between focusing on one character and the whole team. It’s a balance that issues two and three managed perfectly, but this month’s issue almost has the opposite problem the first one had… there’s not enough Emerald Knight!

That said, there’s still a lot to like. While Earth-3 mostly finds the characters we know with their morality flipped, Andy Schmidt is playing in a gray area, as we move away from the Starro threat. We have Quick and Atomica, and likely Ultraman, Superwoman, and Owlman, who are trending as straight-up bad versions of their Earth-1 counterparts. Then we have Luthor, Starro, Sinestro who are trending as good versions of their counterparts. John? He walks the line.

From the get-go, I had a good feeling about John Stewart. He wants to do good, but it’s that ring that’s corrupting him. The problem is that it’s the power ring, and what John can do with it, that may favor one side or the other. The Crime Syndicate or the Legion of Justice. Will the Emerald Knight cave to the influence of the power ring, or will he carve his own path? I said minor spoilers, you’re going to have to read the issue to find out!

Crime Syndicate #4 is the first issue in the series where Kieran McKeown and Dexter Vine’s art didn’t sit well with me. It felt rushed, with faces/heads just looking a bit awkward. I have no idea what was going on with Owlman’s cowl, but it’s the first time I’ve actively disliked his look.

Walls Closing In fills the void the main feature left with the Emerald Knight. As with most of these backup stories, the focus is on the character’s origin. It’s the perfect dessert to the emotional scene between John and his daughter from the main tale; giving more weight to that moment. The story shows the mistakes we’re willing to make to ensure the best for our children. As good as this backup story was, it didn’t leave me wanting more like the previous issues’ offerings. It simply served its purpose of making the main story better.

I didn’t back up into anything with Bryan Hitch’s art here. He continues to blend the art with that from the main story, capturing that feel of modern and classic art. Nothing feels rushed in these pages and Hitch once again showcases his work in darker settings.

Schmidt continues to deliver an amazing story, both on the main pages and the backup pages. Having that singular voice really helps the whole issue come together. After ending the Starro threat in three issues, Schmidt was able to plant seeds for the next arc that has me waiting for the next issue to see where it goes. I’m beginning to sound like a broken record, but DC needs to give Schmidt an ongoing series. I think he could continue to do wonderful stuff with these Earth-3 characters, but I’d also love to see him on an Earth-1 character or two.

Crime Syndicate #4 takes a slight step backward, but it has the burden of setting up the next (final?) arc of the series. Despite that, Schmidt hits some emotional beats that make this a must-read issue. I do hope the rushed feel of the artwork by McKeown and Vines is a one-time thing as it does take away from the story, if only slightly.