“The New Deal” Part One: “Strange Visitor”, and “The Paranoid Titan” 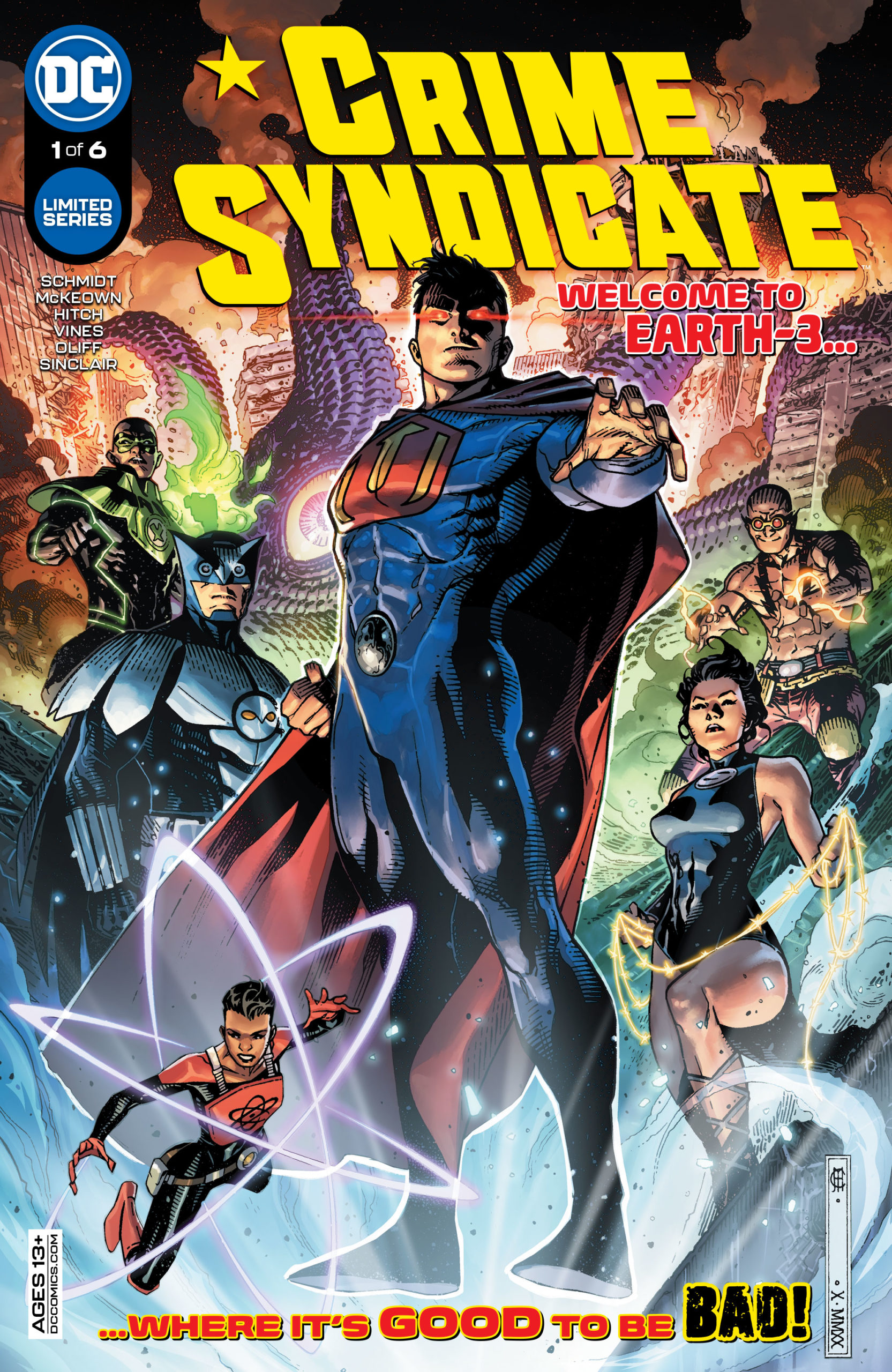 I love picking up stories with characters that are relatively new to me. Despite writing news and reviews for this great site, I’ve only been deep in DC lore for the last decade, and even then, not as much as I’d like to be. My relationship with the anti-Justice League, AKA the Crime Syndicate, is virtually non-existent, but growing up with wrestling in the ‘90s, I love the bad guys; so the opportunity to review Crime Syndicate #1 was too good to pass up. With the multiverse reborn, it’s time to witness the new origins of the malevolent makers of mayhem!

While this is a team-up book between the Earth-3 counterpart of the Justice League, Crime Syndicate #1 does give more of a focus to this Earth’s Superman, Ultraman. It’s likely safe to assume that the remaining issues in this limited series will focus on each of the remaining members of the Crime Syndicate. What’s interesting about this version of Ultraman is that, while he clearly doesn’t have the same morality as Superman, the people of Earth-3 Metropolis seem to have similar feelings about him. That is, some people love him and others believe him to be a threat.

While we’re introduced to the rest of the Crime Syndicate – Superwoman (Donna Troy), Power Ring (John Stewart), Johnny Quick (Jonathan Allen), Atomica (Rhonda Pineda), and Owlman (Thomas Wayne, Jr). Fair warning for those with kids, the initial page featuring Superwoman gets a little spicy. It’s our introduction to Power Ring I found most interesting though, as it seemed like John struggled with serving Earth-3’s brand of justice at first.

These introductions are a great setup for this series, and they all lead to a global threat that will surely bring the Crime Syndicate together. As the final pages suggest, there’s one question that begs to be answered: is this common foe enough for an alliance with this villainous crew to last?

As Andy Schmidt wrote both this and the backup story, I’ll focus on Kieran McKeown and Dexter Vines’ art. There’s a classic feel that they bring with their work that also delivers a level of detail expected in modern comics. It makes Crime Syndicate #1 feel both fresh, and also like a timeless classic. Steve Oliff’s colors only strengthen that metaphor by walking the line of that classic darker feel with that modern vibrant color to accent the art. 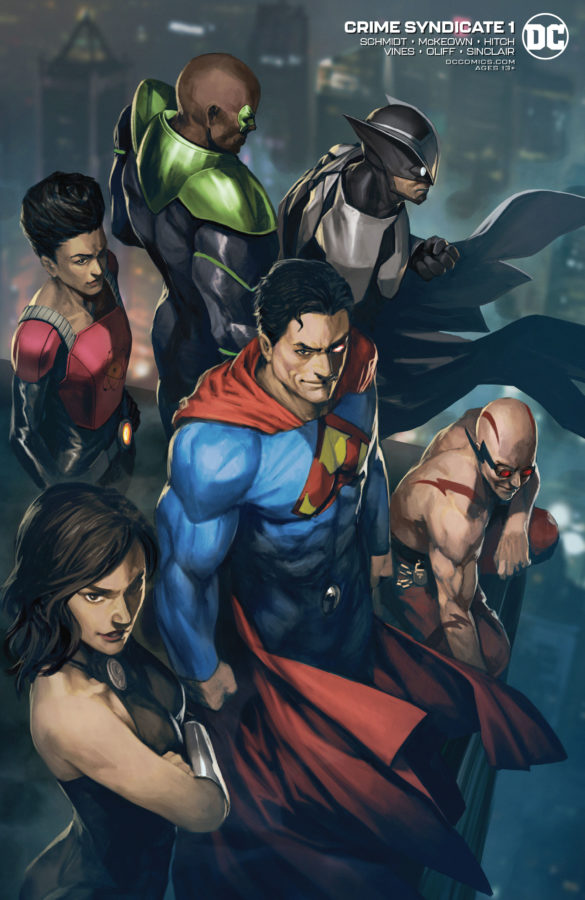 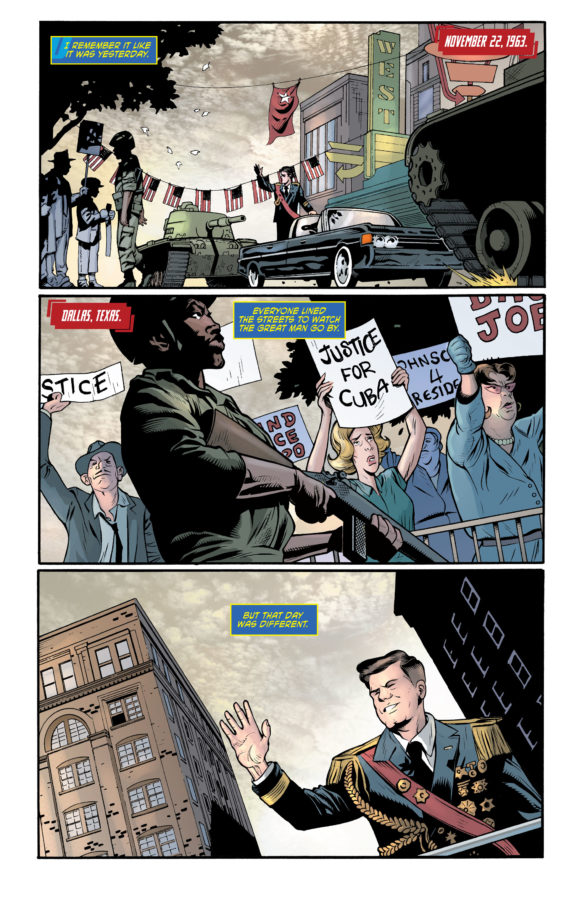 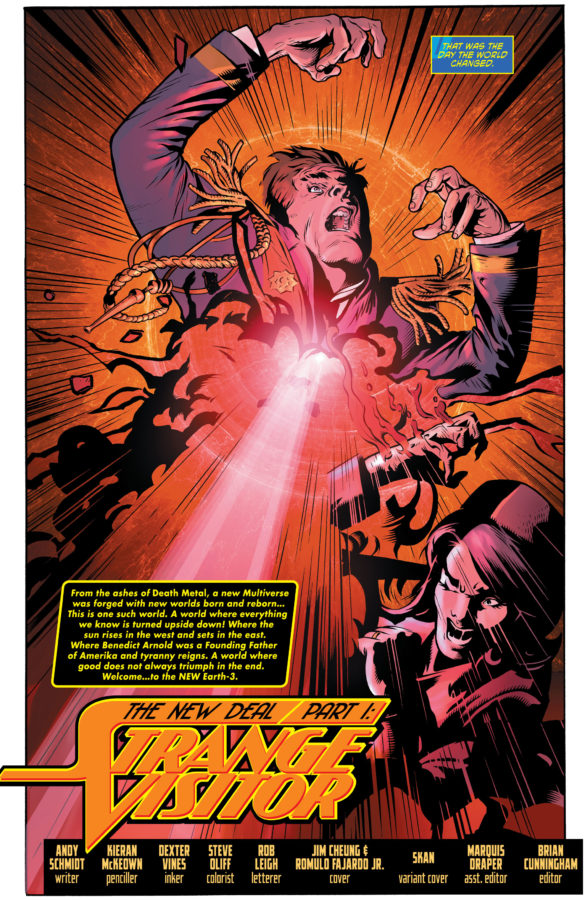 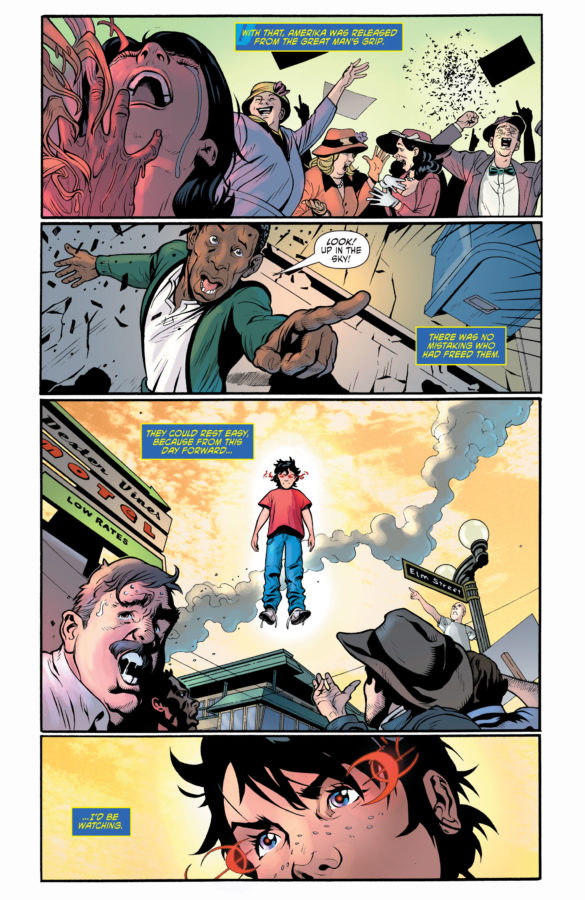 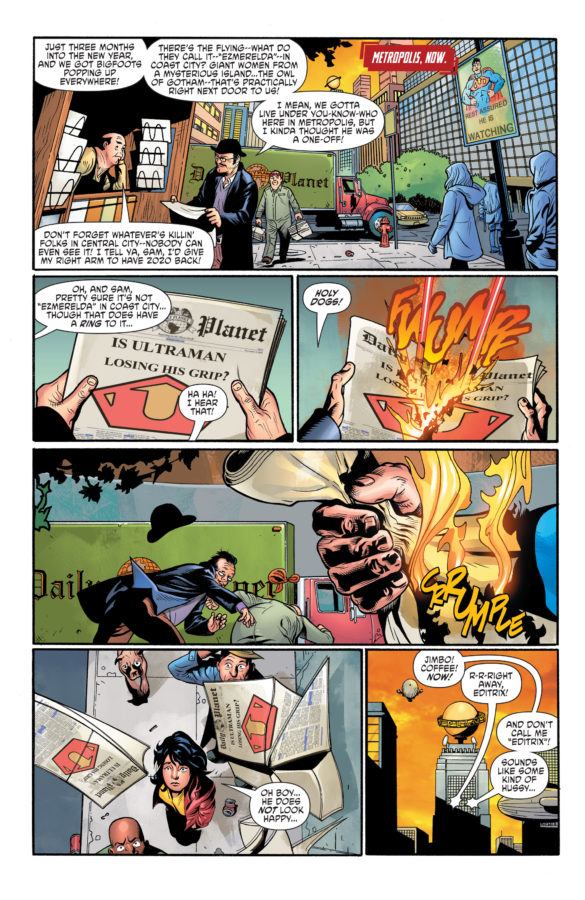 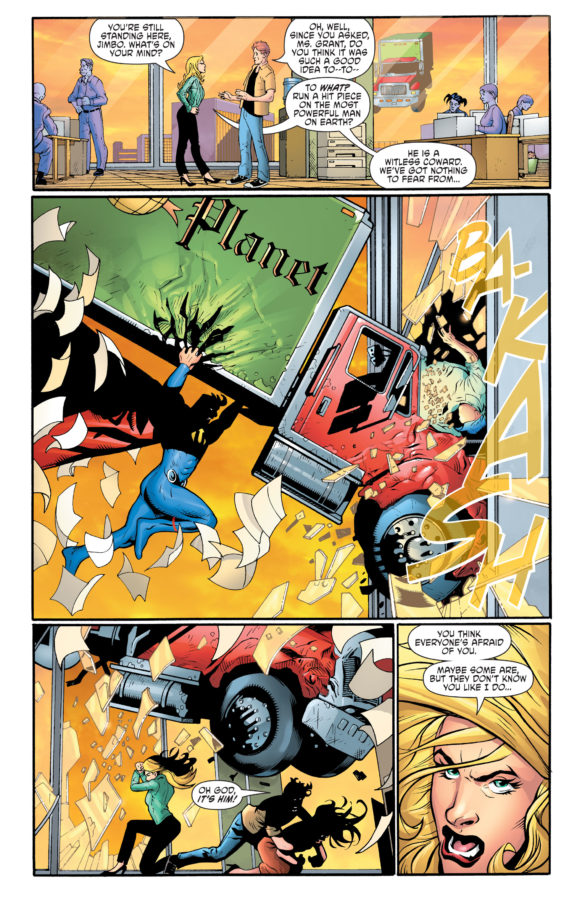 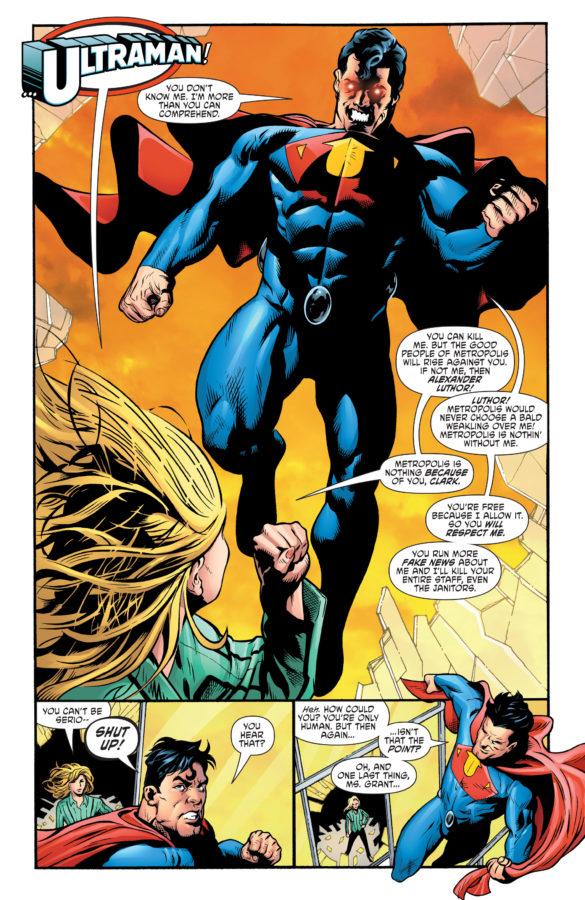 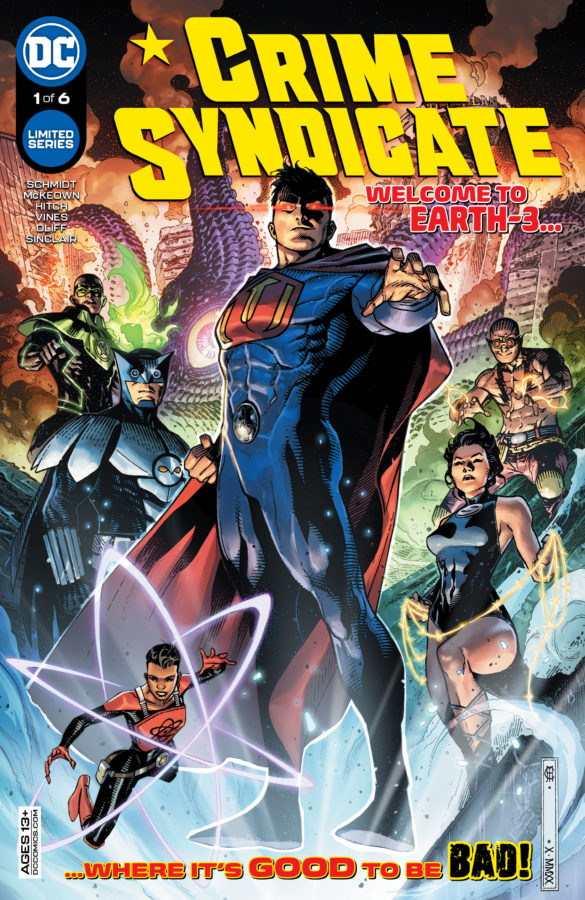 The backup story in Crime Syndicate #1 focuses on Ultraman’s origin story, which is reminiscent of Superman’s, although the similarities start to divert after his ship crashes in Smallville. It’s easy to see how the boy we meet in these backup pages turns into the man we just got to know in the main story, and, if I’m being honest, I preferred this expanded look at Ultraman to the main story that so many first issues have a problem with, setting up the rest of the series. The Paranoid Titan was a tight and concise story that helped make Strange Visitor better in hindsight.

Bryan Hitch’s art meshes with McKeown and Vines as well; so much so that I initially didn’t realize there was another artist involved. Hitch brings the same energy to the second strip as we get in the main story, but it’s his night scenes that really pop. Perhaps it’s because it’s the first time we see night in Crime Syndicate #1, but it makes the story stand out, especially when Clark allows his anger to take over.

Schmidt wrote both parts of this issue and I must admit, I loved his work. While Strange Visitor was, in my opinion, the weaker of the two stories, that’s high praise because that main story still deserves high marks. His take after this first issue leads me to want to see Schmidt take on a Justice League title, though I think I’d rather see him take on a Superman book. Heck, I wouldn’t say no to a more in-depth look at Schmidt’s Ultraman either!

Crime Syndicate #1 brings a new version of the supervillain team of Earth-3 to light in a way that leaves you wanting more. It does a great job at showing that these characters are bad and that we shouldn’t like them. Despite that, we kind of do. We want to see these villains team against this common foe and to see them succeed. One of the only negatives after this issue is knowing that there are only 5 more to go!