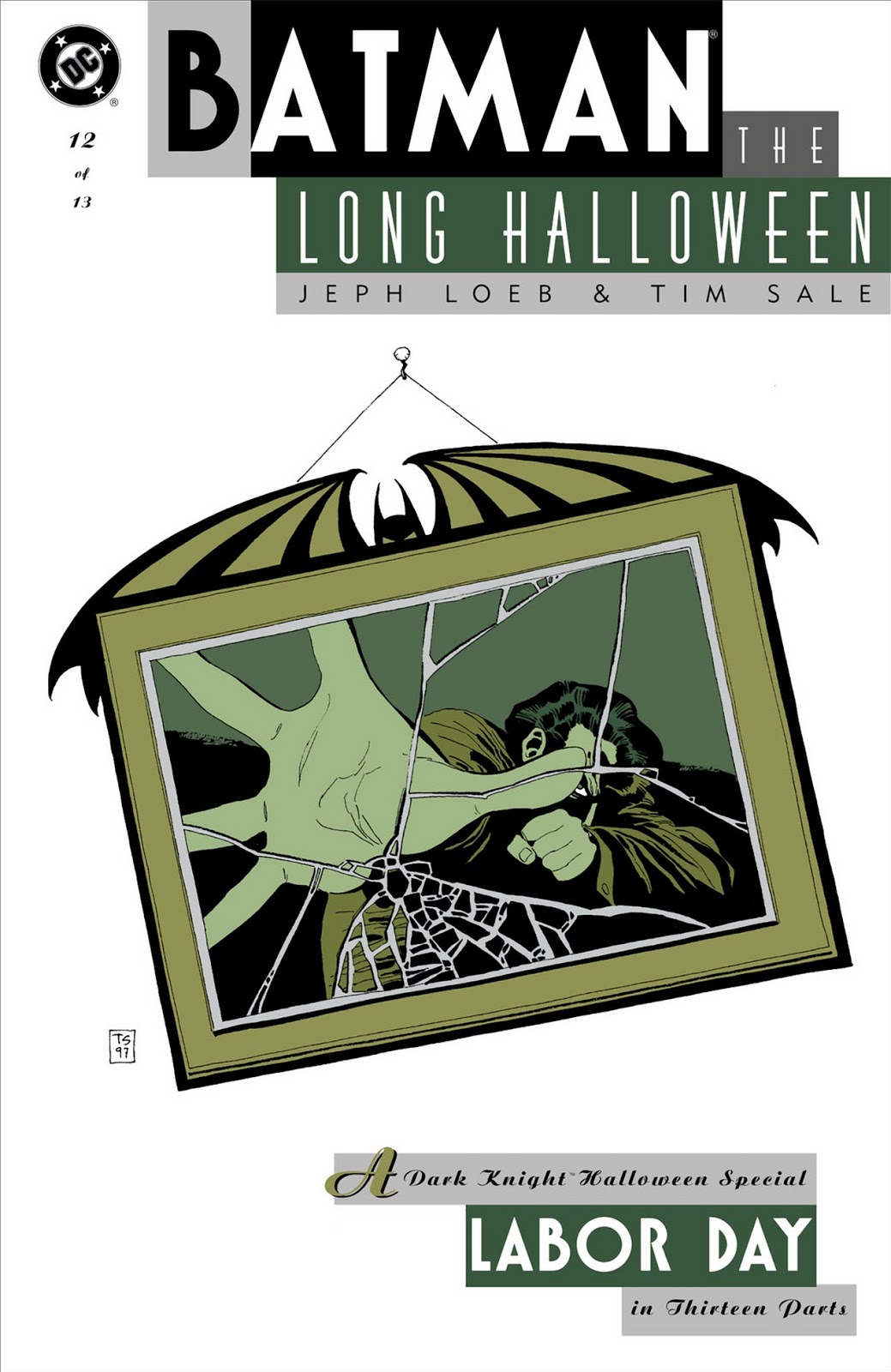 The secret is out: Harvey Dent is Holiday, but he’s been missing since that life-altering day where Sal Maroni threw acid in his face.

Where is Dent now?

The Connection Between Dent and Solomon Grundy

The book opens with Dent meeting Solomon Grundy face-to-face (get it?). The simplistic Grundy instinctually attacks Dent like a scared, wild animal. However, Dent calms him down by reciting the Solomon Grundy nursery rhyme. 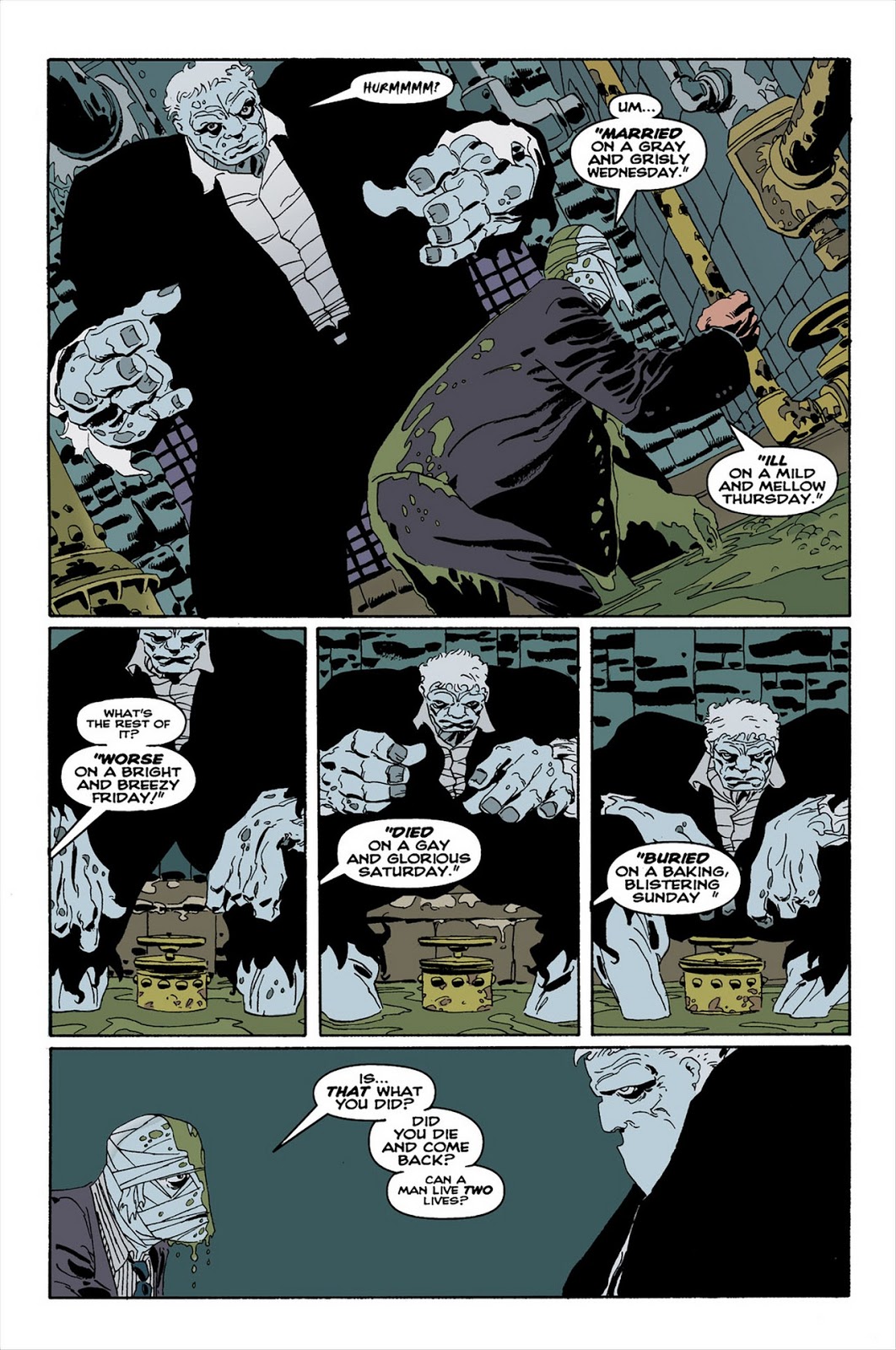 The interaction is an interesting parallel to how Batman encountered Grundy during Thanksgiving. Where Batman attacked Grundy, only to feel remorse for the creature later on, Dent and Grundy find an immediate connection. Given that Grundy’s origin is rooted in perpetual rebirths, Dent is able to relate as he goes through his own emotional rebirth.

The original Solomon Grundy rhyme does not necessarily refer to a rebirth, but a man’s metaphorical birth, rise, and then death. The days of the week reflect a lifetime. It also is shows how death can be so sudden and unexpected. Similarly, The Long Halloween has chronicled Dent’s rise as a villain and death as a hero.

Meanwhile, Batman is still coping with the double-whammy (zing!) that Dent is allegedly Holiday, as well as having him mentally snap. Batman has strongly suspected that Dent was Holiday since April’s Fools Day, a fact that he neglected to tell Commissioner Gordon until now. Gordon is understandably upset that Batman kept this from him. 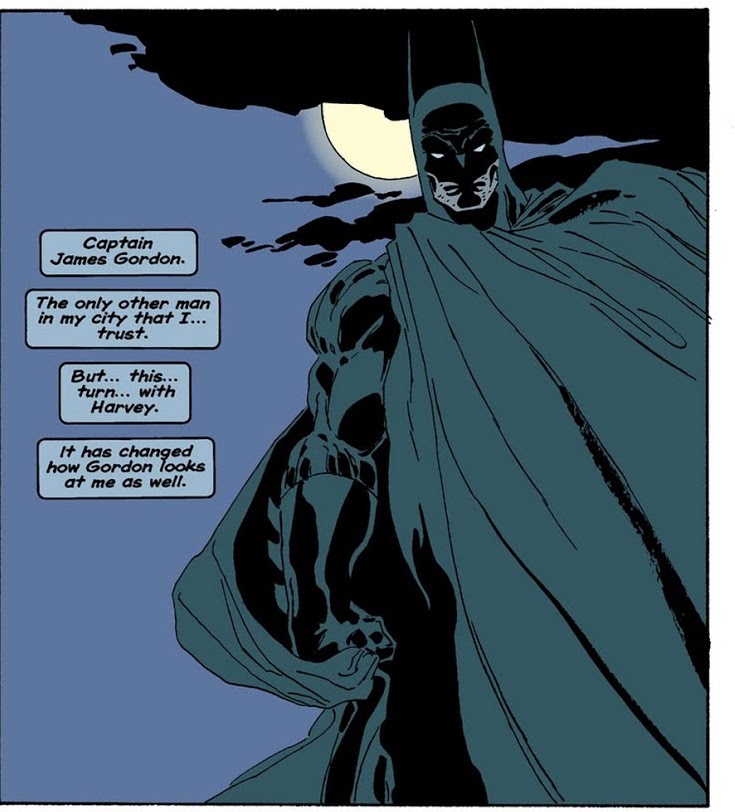 Batman and Gordon have tension

The irony is that Batman not trusting Dent or Gordon may have led to Dent’s downfall. Even more ironically, these events only intensify Batman’s trust issues. Writer Jeph Loeb probably did not intend for Batman’s character trajectory to be followed-up on, but he expanded upon it wonderfully in Dark Victory.

Spurred by Gordon, Batman goes on a search to find any possible leads to where Dent may be. First, he visits Falcone, who weirdly also knows about Dent being a suspect for Holiday despite Gordon only figuring it out maybe an hour ago.  In fact, from this point on, every character knows about Dent’s possible connection to Holiday. Perhaps, Falcone has spies in the GCPD who told him about Gordon.

Anyways, Falcone’s interrogation turned up fruitless for Batman, but before he leaves, Falcone accuses Batman of purposefully prolonging the “Long Halloween”. Given that primarily mobsters have been Holiday’s victims, Falcone believes that Batman is letting them get all killed to clear the underworld. 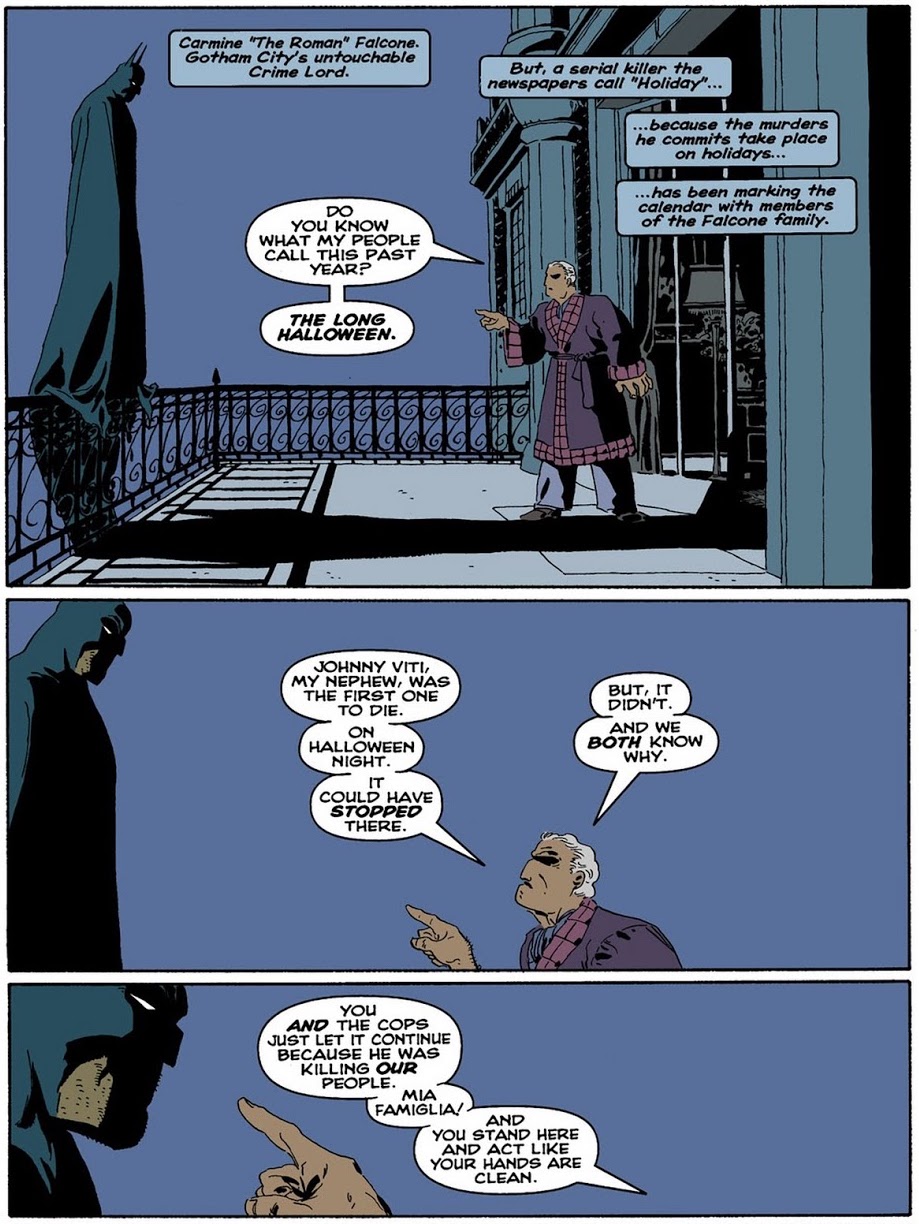 After, two equally unsuccessful interactions with Catwoman and Gilda Dent, Batman interrogates the Calendar Man in Arkham Asylum. Bats believes that Calendar Man may have assisted Holiday in some form, making him the next best informant. While Calendar Man’s ramblings are nonsensical, he does take the time to make a clever pun from Harvey Dent’s name. 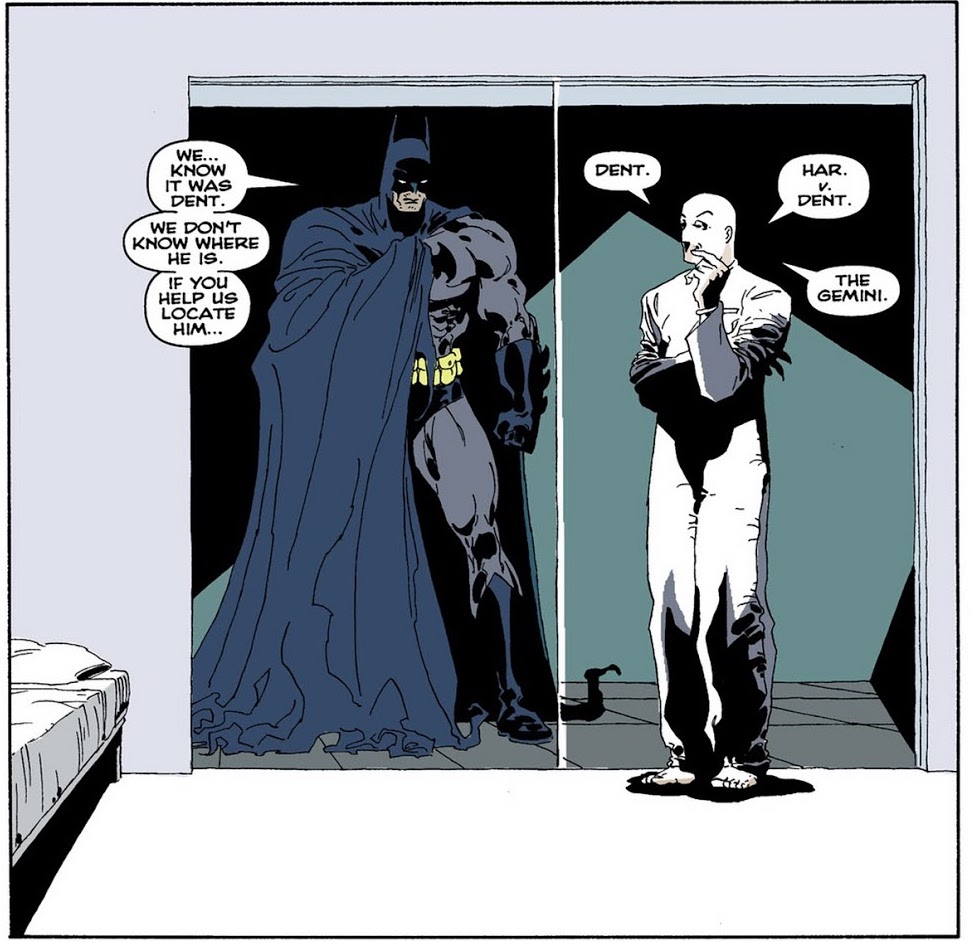 A small remark, but this line of dialogue informs everything about his motives in both The Long Halloween and Dark Victory.

Subtle foreshadowing aside, Calendar Man actually proves to be helpful. He implies that Holiday will probably go after Maroni next. Since tossing acid in Dent’s face, Maroni has been cooling his heels in jail. Enter Gordon, who escorts the gangster to higher security.

That is until Holiday strikes again. Maroni is immediately shot in the head. The armored guard pounces on Holiday, knocking off his hat, only to be shot himself. Gordon scrambles for the flashlight only to reveal the shooter to be… 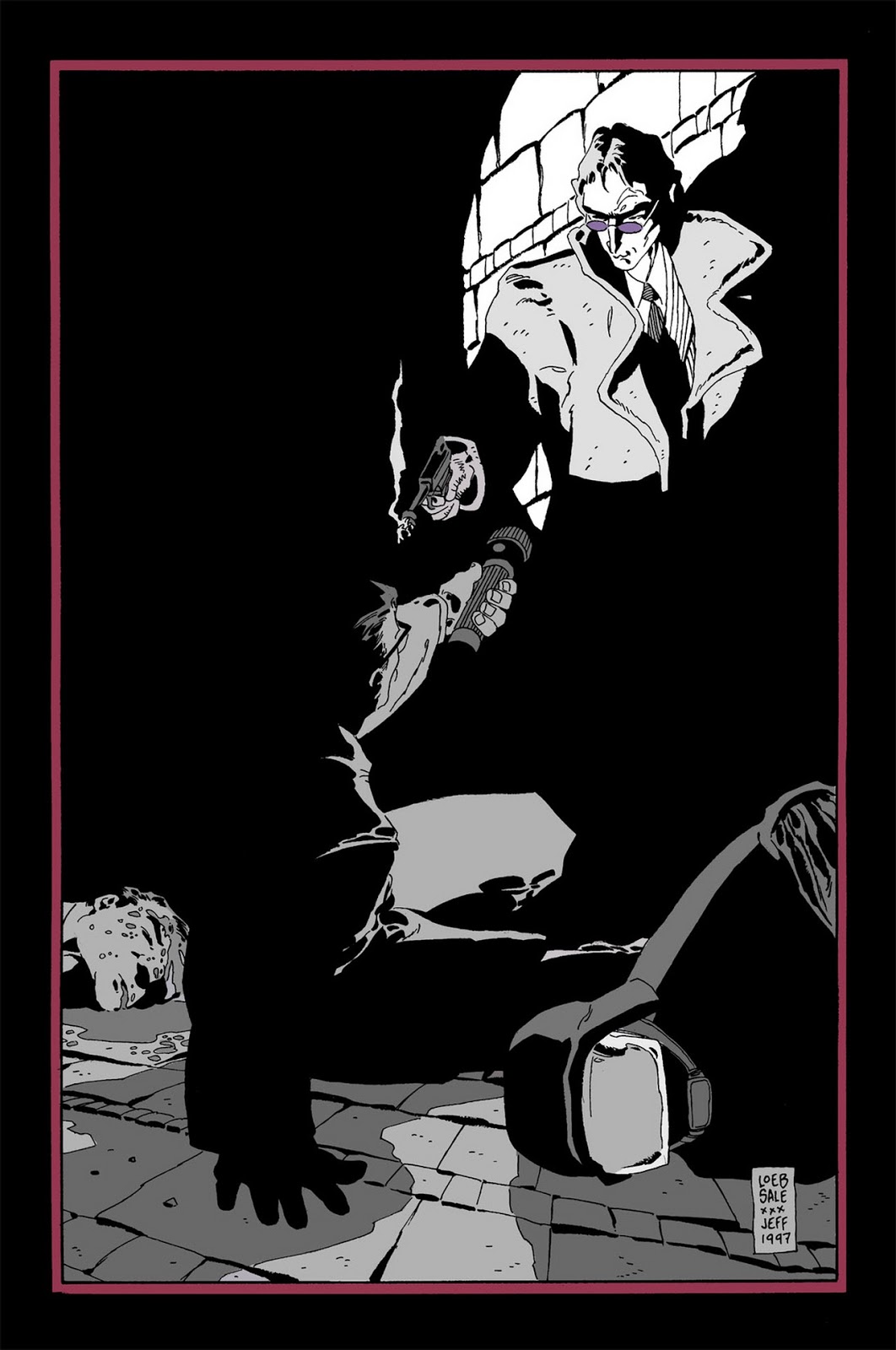 Loeb and Tim Sale do an amazing job with the dramatic reveal. It hits readers quickly and surprisingly. The frantic pacing of the ‘Killing pages’ let’s readers see from Gordon’s perspective. Both character and reader are wildly trying to figure who Holiday is, and the reveal page is a perfect mix of mystique and revelation.

Remember when I said Sale is the master at making distinctive non-costumed characters? It pays off wonderfully here. The readers can instantly recognize the thin, wiry frame of Alberto Falcone. To top if off, the spot coloring of his trademark purple glasses makes for an instant signifier. The last two pages is a textbook example of how to properly choreograph a shocking cliffhanger in a comic book.

This issue shows the repercussions of Batman and Gordon’s choices, as both good and bad parties are affected. The final scene makes the Holiday reveal one of the most memorable and narratively satisfying twists ever.