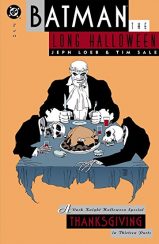 We last left off with an explosion at the home of Harvey and Gilda Dent, leaving readers wondering if the loving couple survived the blast? Obviously, they did, and this issue picks up a few weeks later with Batman and Gordon interrogating suspects. They push as hard as they can, but ultimately don’t progress. The five men are even charged, but make bail less than hour later due to having those unique connections. However, they can’t escape the Holiday killer, who wipes them out and leaves a cursed cornucopia at the scene of the crime.

Moving right along, “Thanksgiving” delivers another exciting chapter in this epic story. Jeph Loeb sticks to his design, thickening the plot with suspects, twists, and more murder. He shines here with some really brilliant moments; Harvey’s switch with “Mickey”, a slight focus on Alberto Falcone (hinting toward future issues perhaps?), and my favorite part: those two panels showing Harvey in Gilda’s hospital room, and Gordon arriving to an empty table full of Thanksgiving food. 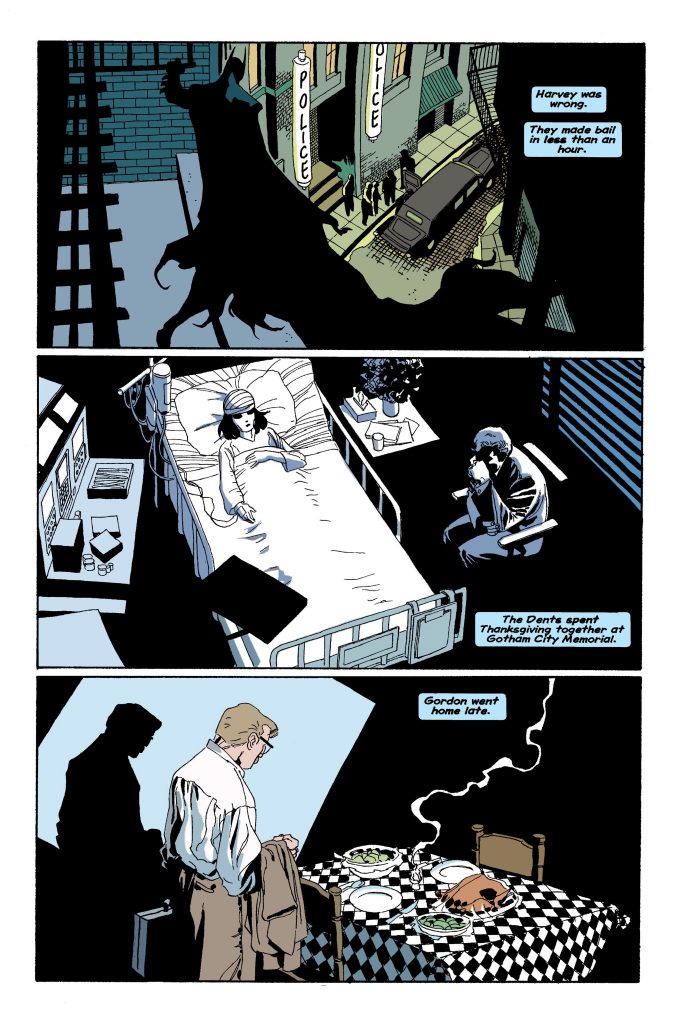 It tugs at the heart strings, and shows the cost of these man pursuing justice. I especially love Gordon’s lines early on that his wife is at home cooking, “Where decent, honest people should be on this day”. Loeb does such a good job of bringing the stakes home here. What we take for granted, these people trying to take down crime are giving up that freedom and right. It’s a great point that is nailed in this issue. 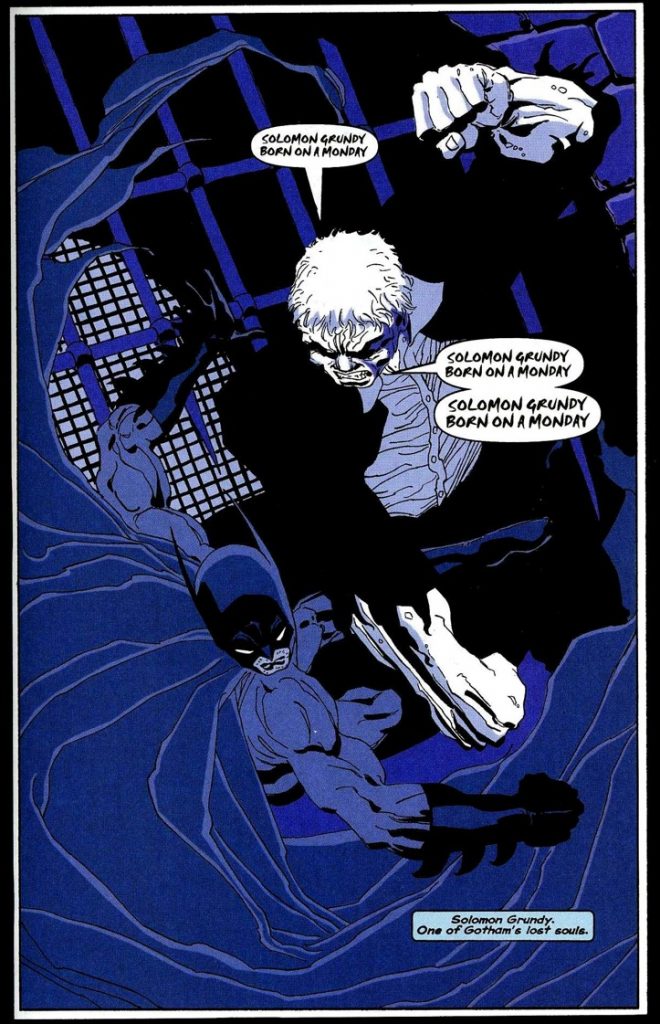 Another fun inclusion in this issue appears on the cover: Solomon Grundy (born on a Monday). This was my introduction to the character. Not much is given on his backstory, other than he’s one of Gotham’s monsters and lives in the sewers. He encountered Mickey, and Batman had to take him down to capture the suspect. However, it was cool to see him here.

Tim Sale’s art continues to cement itself in Batman history. I love his design of the Dark Knight, Gordon and Dent. He also creates a cool looking Solomon Grundy. His “boyos” don’t particularly stand out, but that’s okay. They’re gone by issue’s end. Still, Sale creates a mood that reflects pessimism, gloom and an upcoming dread. The Long Halloween isn’t a happy story, but it’s hopeful, and at least one panel in each issue provides that glimmer of hope.

“Thanksgiving” moves the narrative along at a rapid pace. Suspects are questioned. Batman and Gordon are on edge. Falcone is still calling the shots. And the Holiday killer strikes again. It’s a feast for comic fans, but leave room for dessert…next month’s Christmas issue.