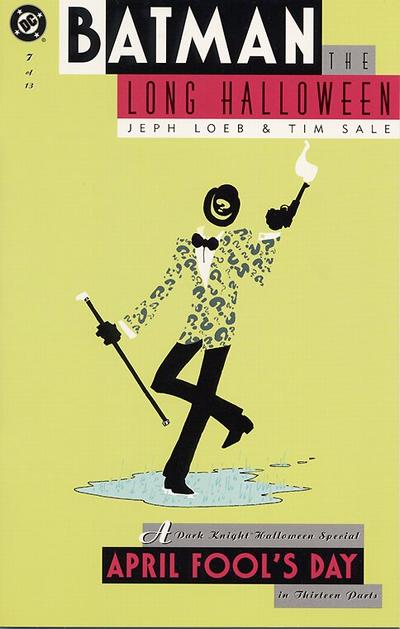 At this point, the Holiday killer has claimed a good handful of lives. Both the Riddler and Batman use their deductive reasoning to try to solve the mystery. Under the service of Carmine Falcone, the Riddler deduced that the Holiday uses their trademark .22 caliber pistol because it is cheap. Or because it is lightweight for a female assailant. Like Catwoman.

Could Catwoman be the Holiday killer?

Of course Batman zeros in on suspects that have more obvious motives against Falcone. Rival crime boss Sal Maroni is an easy suspect given his public desire to un-seat Falcone as Gotham’s head crime boss. He could use the Holiday killings as a cover to wipe out the Falcone competition.

Could Sal Maroni be the Holiday killer?

Sal Maroni may be Holiday

However, the Riddler deduces that there are people who have more personal motives. The first Holiday victim was Johnny Viti. Johnny was supposed to testify in court against Falcone and other crime families, including his own mother – the head of her own crime organization. The person who stood to lose the most from the court hearings would have been Falcone’s sister and Johnny’s mother, Carla Viti.

Could Carla Viti be the Holiday killer?

But Alfred interjects to Batman the most disturbing suspect yet: Harvey Dent. Dent has the motives, means, and time.

Could Harvey Dent be the Holiday killer? 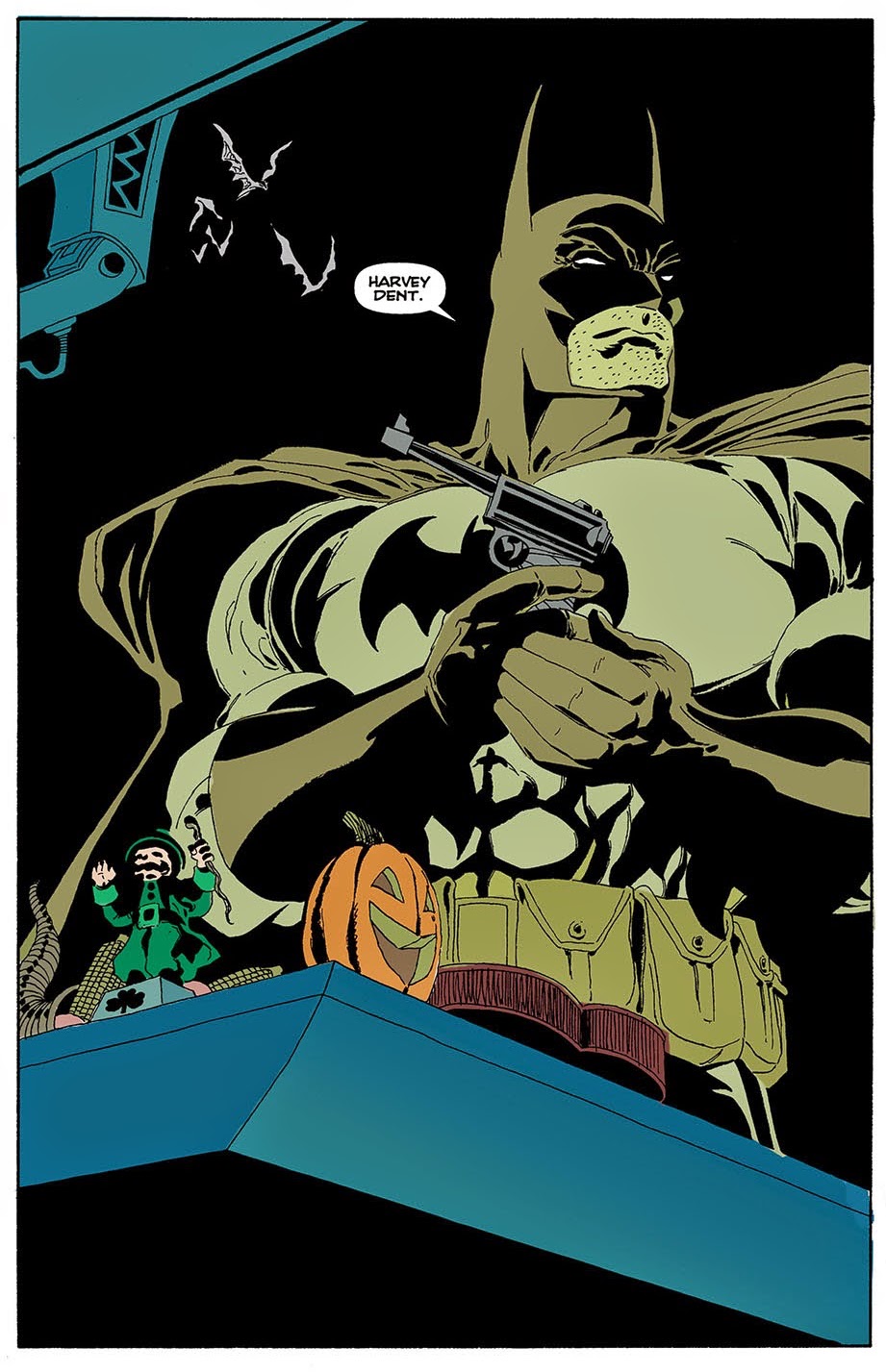 Dissatisfied with the Riddler’s lack of answers, Falcone throws him out in the rain. However, the Riddler encounters a shadowy figure holding an umbrella and a .22 caliber pistol. But instead of killing the Riddler, Holiday spares him. After all, it is April Fool’s day in Gotham. 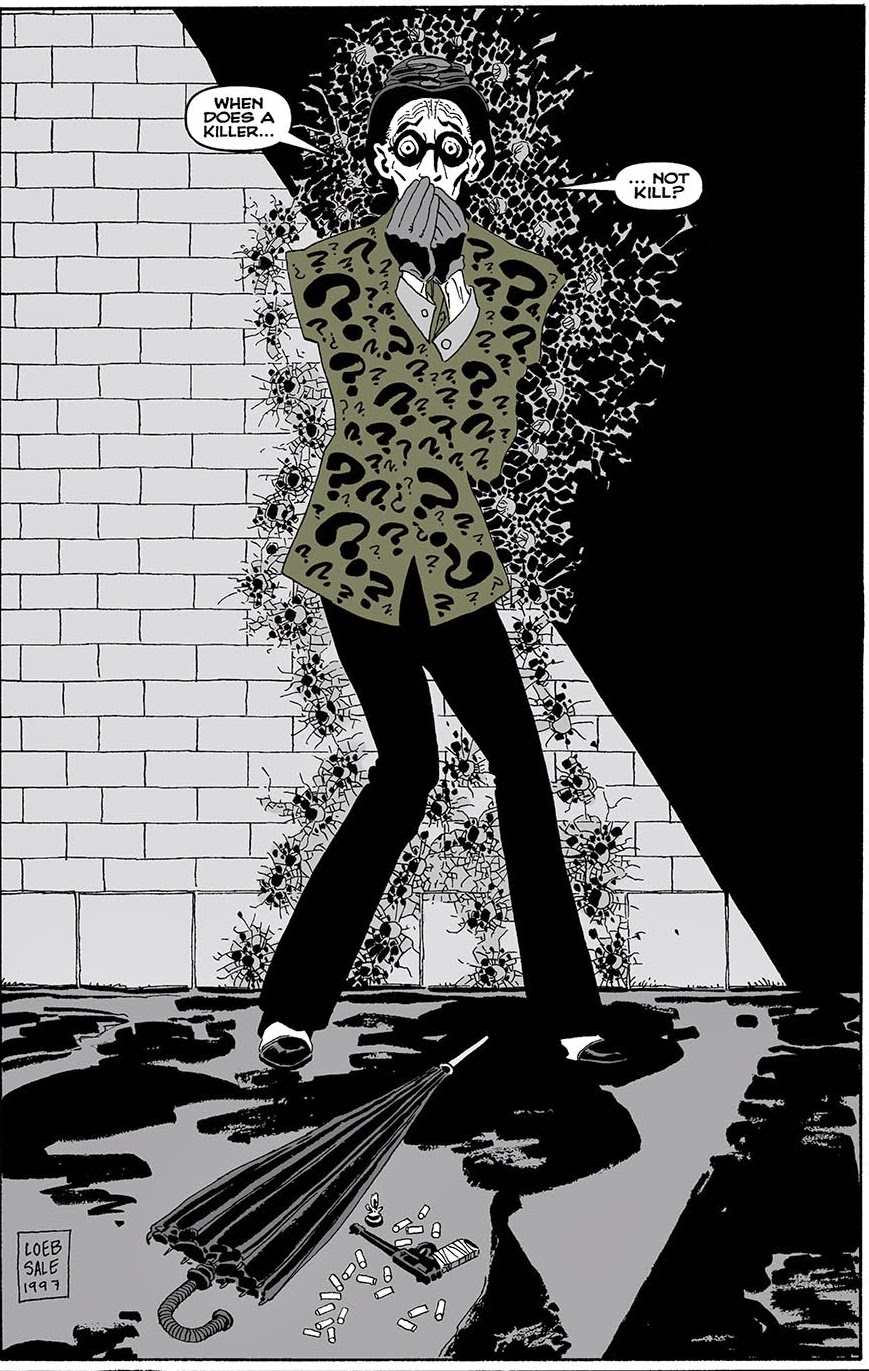 This issue is light on a progressive plot. It is a recap of the previous events. However, Jeph Loeb and Tim Sale frame the recaps in an interesting way, so it does not feel repetitive. We see scenes from potential different angles and with potential different killers. Visually, it is fun to view sequences reframed with different characters.

Speaking of different characters, lets also take the time to appreciate what a sprawling cast this story has. Loeb seamlessly integrated old and new characters into one cohesive plot and gave everybody a backstory. What is more, it does not feel tedious. In fact, the extensive connective backstories feels natural and as if these characters have known each other forever. It also pays off in this issue where it genuinely feels like everybody is a potential suspect.

On the art side, Sale had the laborious task of making every character distinctive. While easy for the costumed characters, it is more challenging for the “normal” human characters. And there are a ton of “normal” characters. This is where Sale’s cartoony style work works wonders. He exaggerates features on people, so you get a quick visual idea who they are. Every person looks distinctive.

No two people look alike in a Tim Sale comic.

This issue is essentially the comic book version of a clip show episode. There is only a little plot progression, but that’s okay. It helps that Loeb and Sale are masters at exciting framing sequences. It was genuinely thrilling imagining what the Riddler and Batman’s thought processes were. Of course, the biggest revelation is that Harvey Dent maybe the Holiday killer. This suspicion will continue to haunt Batman for the rest of the series and even into Dark Victory.