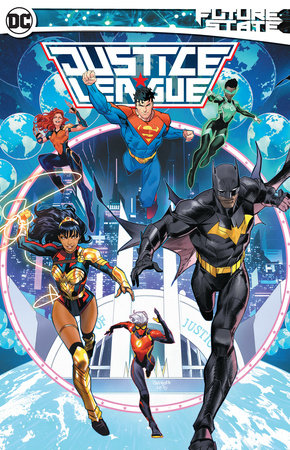 This story, for me, was the most surprising. Jay Garrick, Barry Allen, Wally West, Bart Allen; whichever man was behind the mask, The Flash has always been one of the brightest, most positive characters, and series, in all of comics. This story was dark! Don’t get me wrong, I loved it, but this was a tale of death, sacrifice, and horror. Of course, as with all great superhero comics, the ending left a glimmer of hope, but the cost was very, very high indeed.

The writing’s great in this one, and even though chapter two is drawn by a different artist to part one, the story still felt cohesive and looked good, too. 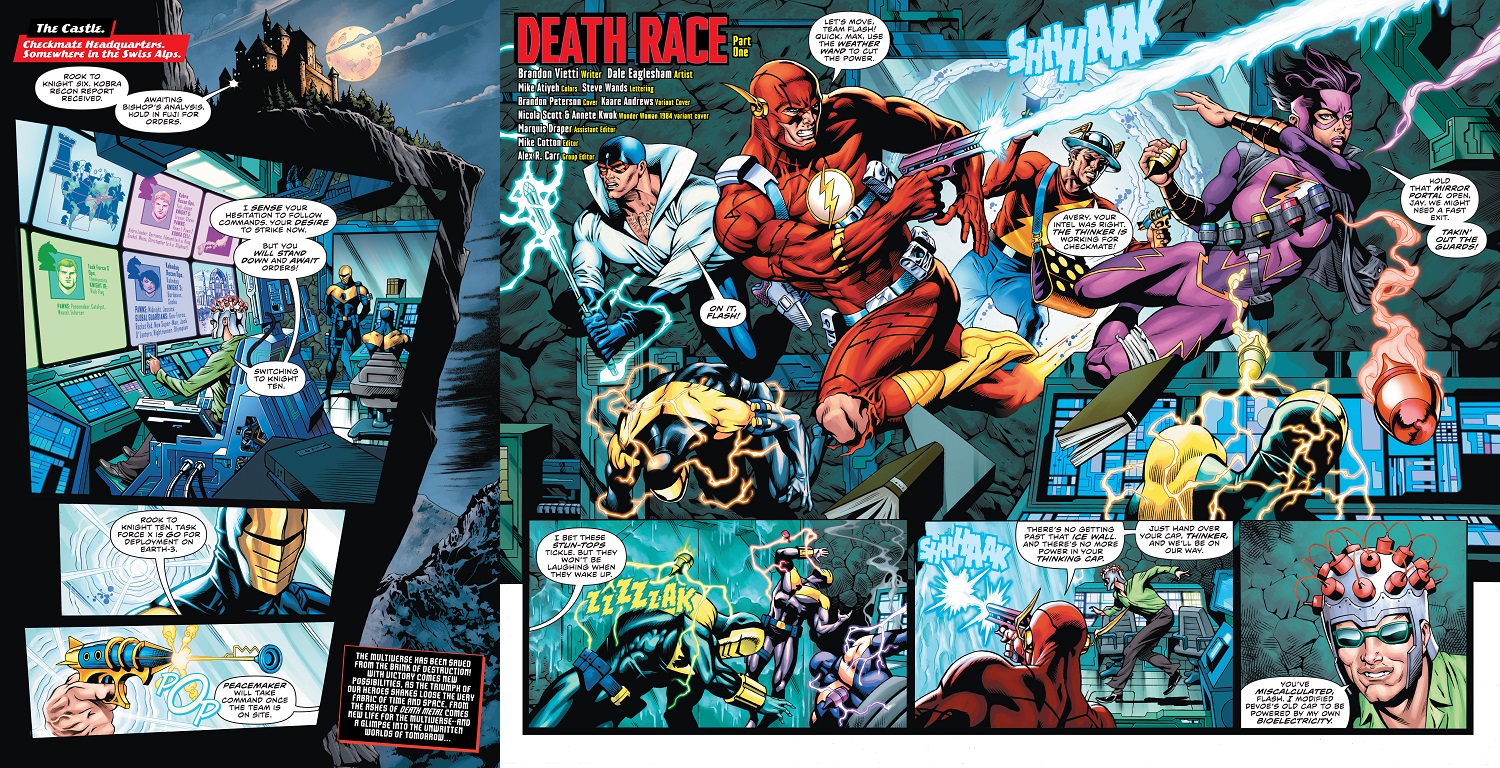 Arthur Curry and Mera barely get a look in, in this story. Instead, the focus is shifted to their children; one adopted, and the other biological: Andy Curry, the future Aquawoman, and Jackson Hyde. This was my first exposure to both characters, and I can honestly say that I officially love them. The setting, dimension-hopping, and characterization are first-rate, and the art is absolutely fantastic.

Special mention must go to the color artist, Adriano Lucas, for his amazing skies and oceans. I really want to see more of this particular future, with these particular characters. 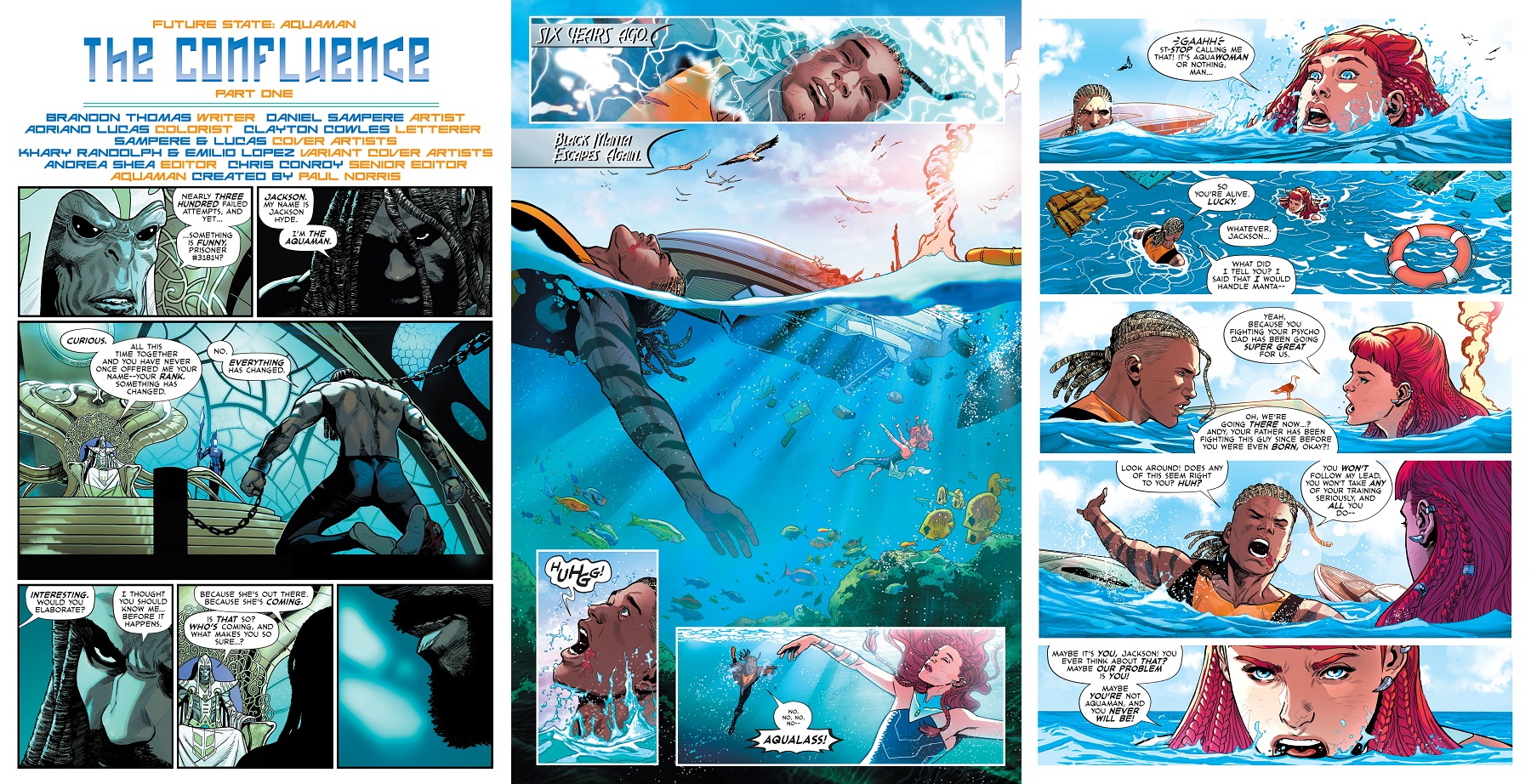 My current favorite DC team is still going strong. It’s brilliant that the writer that gives us this great little two-part story has gone on to chart the ongoing adventures of the team in the ongoing Justice League monthly book. We get magic, horror, brand new twists on classic characters, and a mystery that’s still being unraveled every month… right now!

Detective Chimp, Doctor Fate, Zatanna, and John Constantine are still with us from the Dark League’s most recent series, but we also have new members Madame Xanadu, Etrigan, and Ragman, but not how you’ve ever seen them before! This is another great read, with some terrific art to boot. 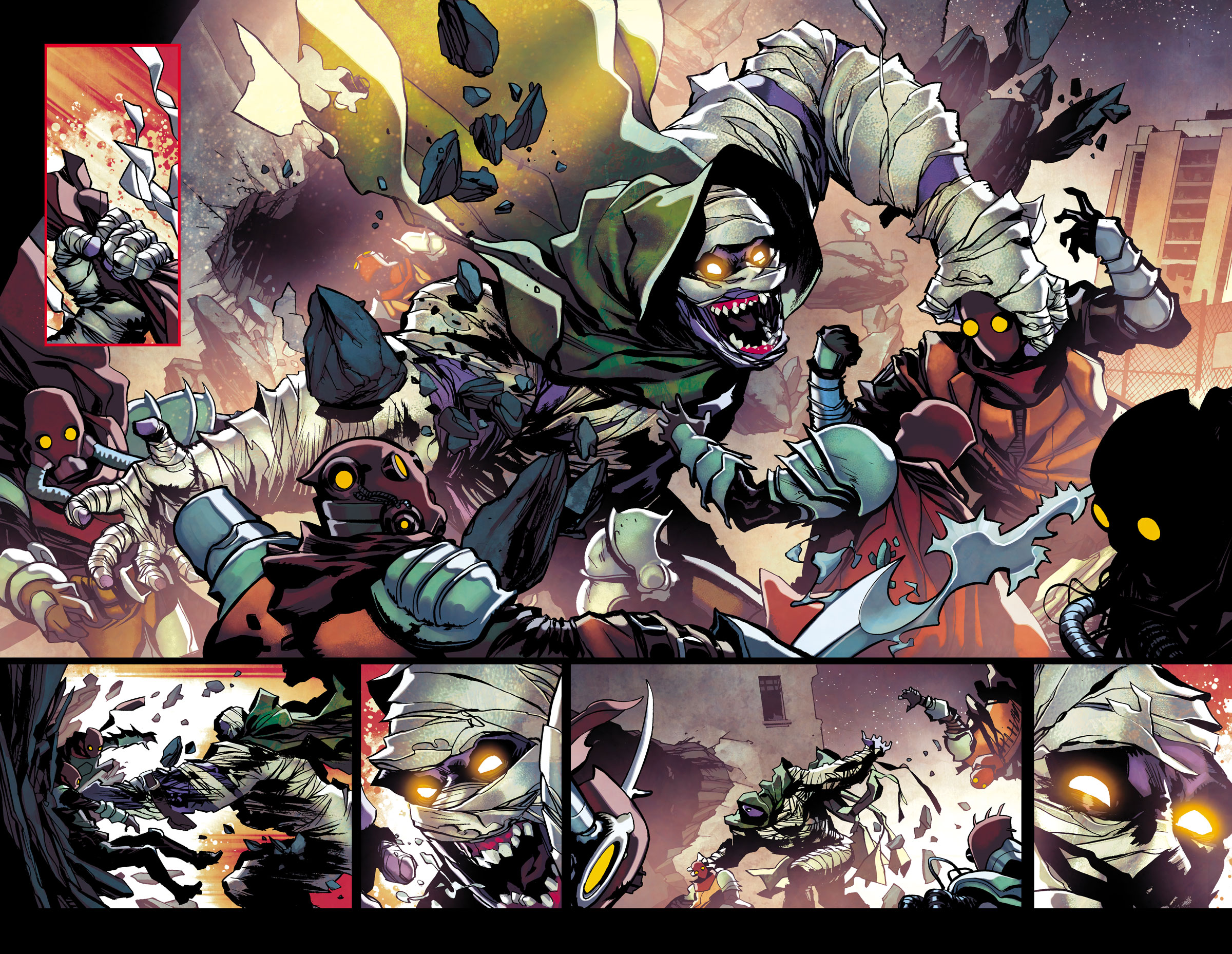 I’m a huge John Stewart fan, but after this story, my already huge love for the character has only grown. Imagine having all of a Green Lantern’s bravery, will, skill, and experience… but no ring. In this future, the corps has lost its greatest weapon, but every member is still awesome beyond belief.

The character designs in this one are terrific. Every former lantern is recognizable, yet totally fresh and new. Justice League International fans will be blown away when they see how much dear old Gnort has changed! This one’s an absolute keeper. 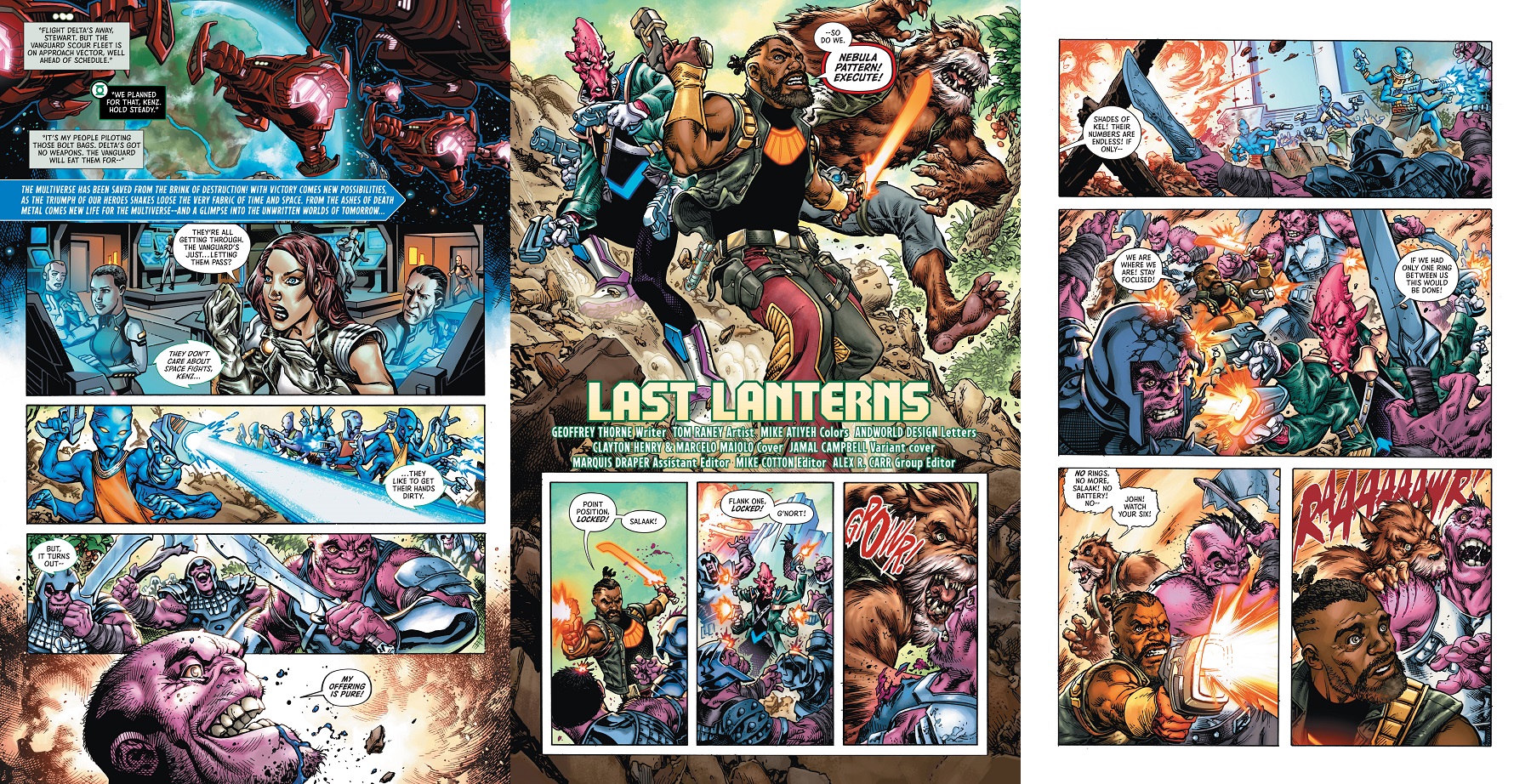 Tales of the Green Lantern Corps

Jessica Cruz, my favorite new Lantern is Batman level scary and awesome in her story. As the sole defender of an invaded Sattelite without her ring against three Yellow Lanterns, you’d think this would be an unfair fight… and you’d be right. The bad guys are in trouble.

The ending to this story is fantastic. I want more!

Guy Gardner has often been the joker in the pack when it comes to Green Lantern Corps members, but they’re all part of the corps for a reason. What Guy achieves in this tale is astonishing, admirable, and wholly unexpected. If you think you know Mr. Gardner, think again.

Teen Lantern and Mogo are a hoot as a team, and this story is just plain fun. Put together a living planet, and a teenager with an attitude and a heart the size of Texas, and you get a recipe for success. Another gem of a tale.

Hal Jordan, arguably the most well-known and respected Lantern of them all is on a mission. He’s alone, powerless, and heading out into deep space.  The Lantern he meets at the end of his journey, out in the Far Sectors of the known universe, will make even the most cynical fan smile in delight. 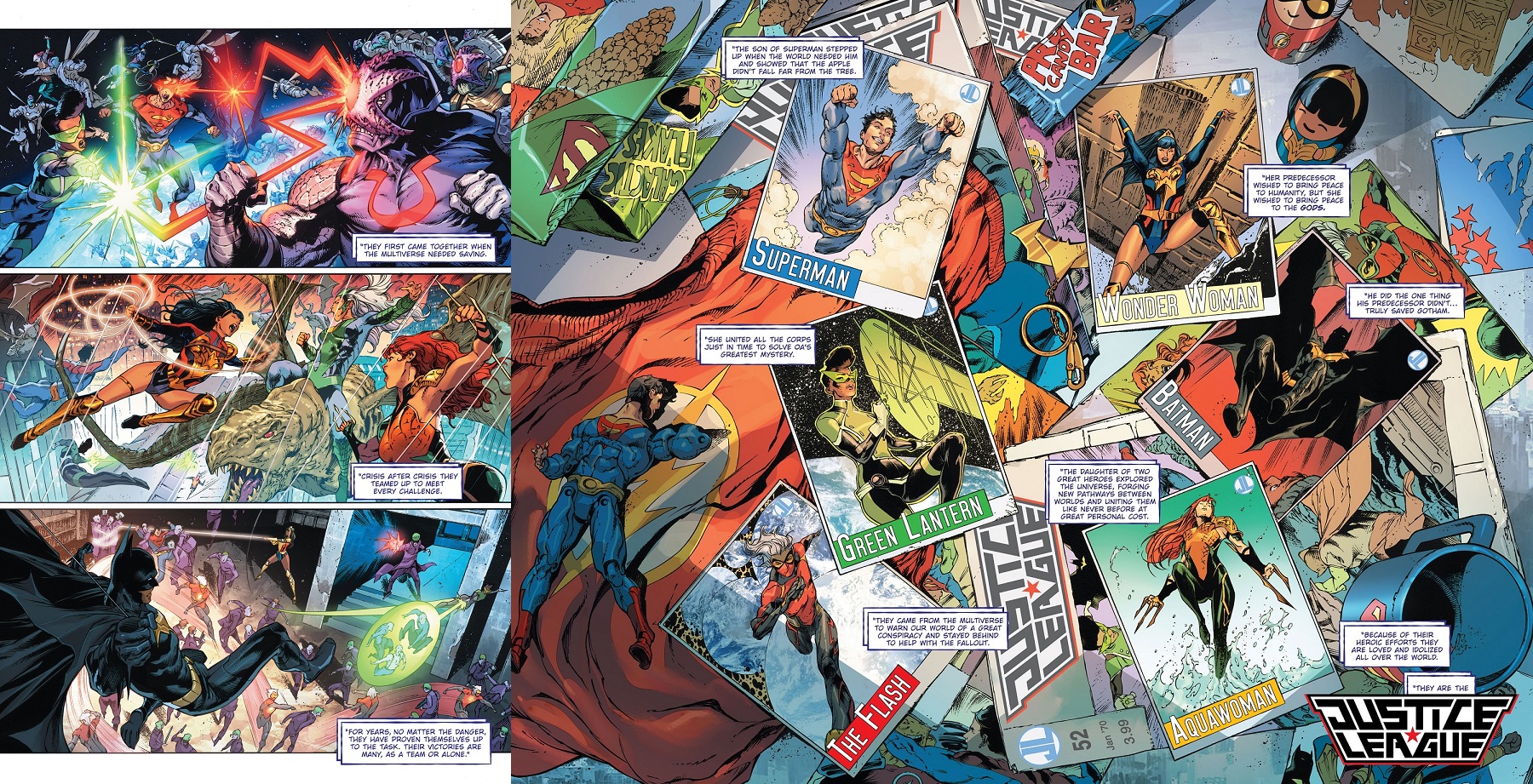 The stars of the show… or should that be their successors? This main event is a cracker of a tale. It’s perfectly paced, full of character and gorgeous art. This may still be a team featuring Batman, Superman, Wonder Woman, Flash, and Green Lantern, but – in their own words – this isn’t your dad’s Justice League.

Fans of every iteration of the League will get their action fix, and old nerds will love the nods to Grant Morrison and George Perez’s legendary runs on the series. Brand new fans will get an all-new, all-different team of heroes to fall in love with. 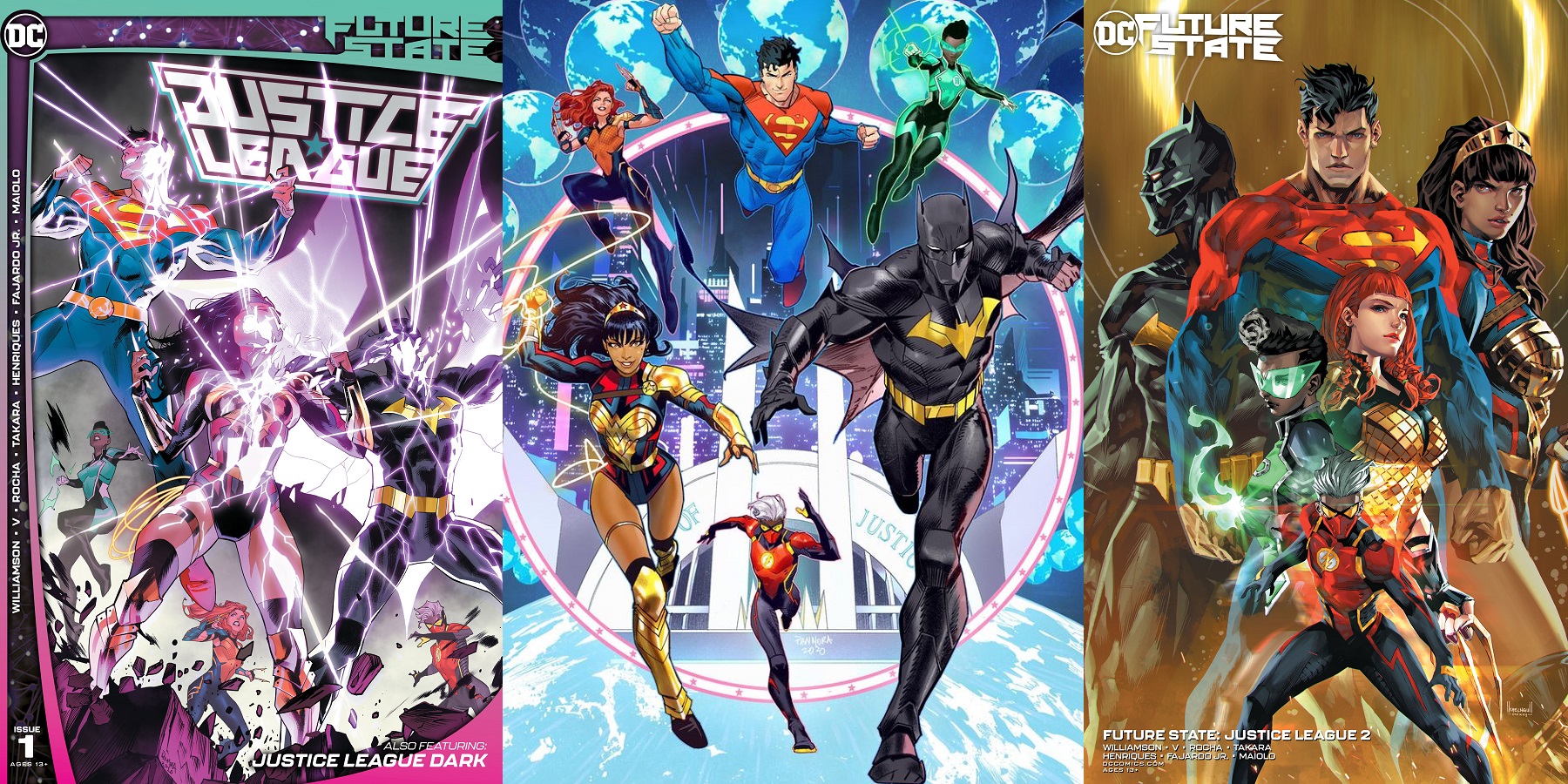 Future State: Justice League is a terrific book. It clocks in at almost 300 pages and delivers on characterization, visuals, shocks, action, and intrigue. If you missed out on the individual issues, treat yourself to this bumper treasure trove of wonder and imagination. Every self-respecting JL fan needs a copy of this tome on their shelves.

It’s out to buy on June 22nd, but available to pre-order on Amazon, and all good book retailers right now.