The future may be the current state, but the past looms large in this week’s Future State: Justice League #1.

It’s out with the old and in with the new. In this issue the traditional League’s been replaced by a variety of legacy characters. However, as much as things change, they also stay the same, as the team’s still dealing with the Legion of Doom. This is not the normal Legion of yesteryear, however. No, the Legion has a completely new roster, featuring some familiar and unfamiliar faces.

Now, one would expect this two-part story to focus on the League vs the Legion… nope! While the issue opens with the Legion, standing in the ruins of the Hall of Justice, plotting against the new League, something very unexpected happens. Therefore, the thrust of this issue revolves around the League trying to unravel this twisted plot thread.

Joshua Williamson’s been given a herculean task: write an entertaining two-part story that introduces a new, future Justice League, and make it feel relevant. Overall, he does a fairly good job. Williamson’s very economic with his pages, as he establishes the important key fact for his story. Part of the challenge with an event like Future State is the issue of continuity, as comics are often built on previous, long-running storylines. The immediate history is important for understanding the here and now, but because this story’s set in the future, Williamson doesn’t have these building blocks, so he makes them up. He alludes to previous events that haven’t actually happened yet, and for the most part, it feels believable.

This does cause a bit of a pacing problem though. The issue opens with a bang but then detours into establishing the new status quo for the League, and exploring character relations, thereby alluding to previous events without an unnecessary exposition dump. This isn’t necessarily a bad thing though, as the issue builds to quite an amazing reveal.

On the last page, Williamson raises the curtain, and – without giving away any spoilers – fans of Grant Morrison’s tenure on JLA will get a fun surprise. 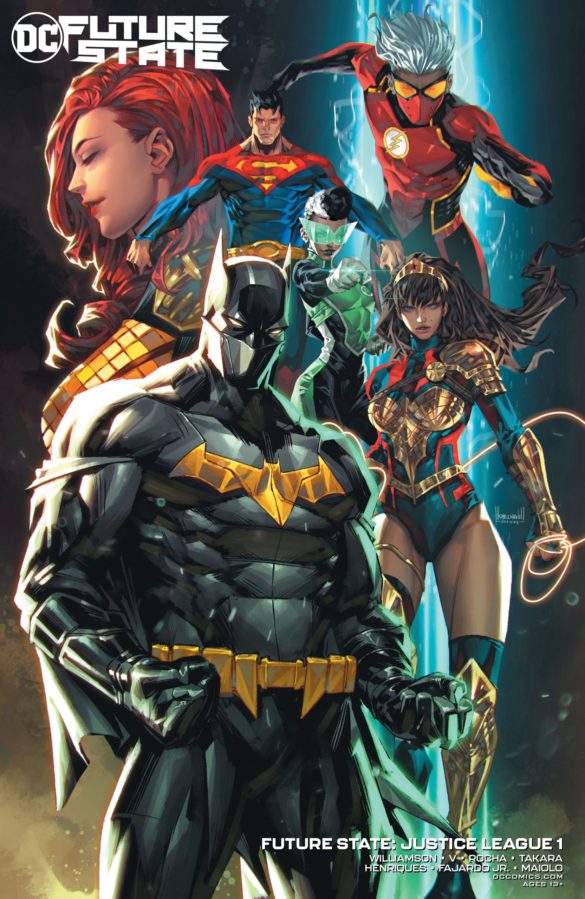 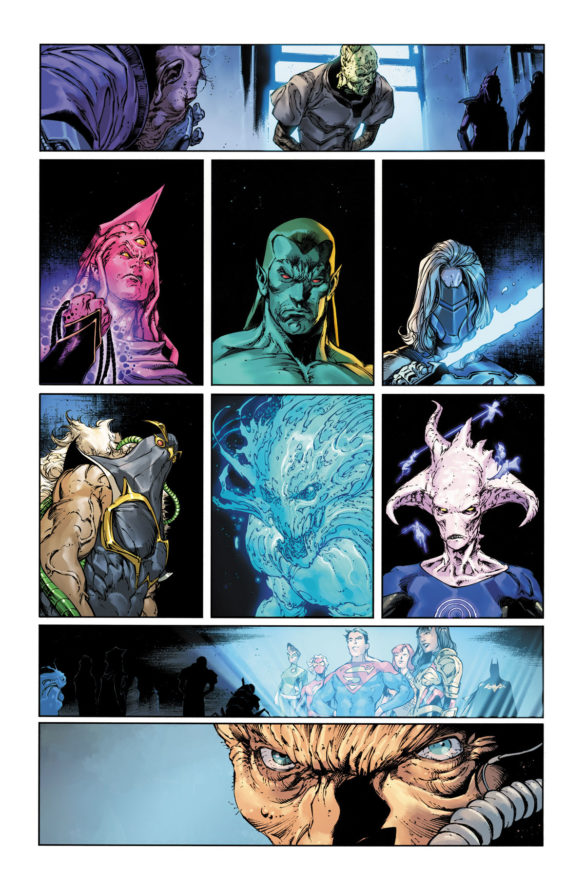 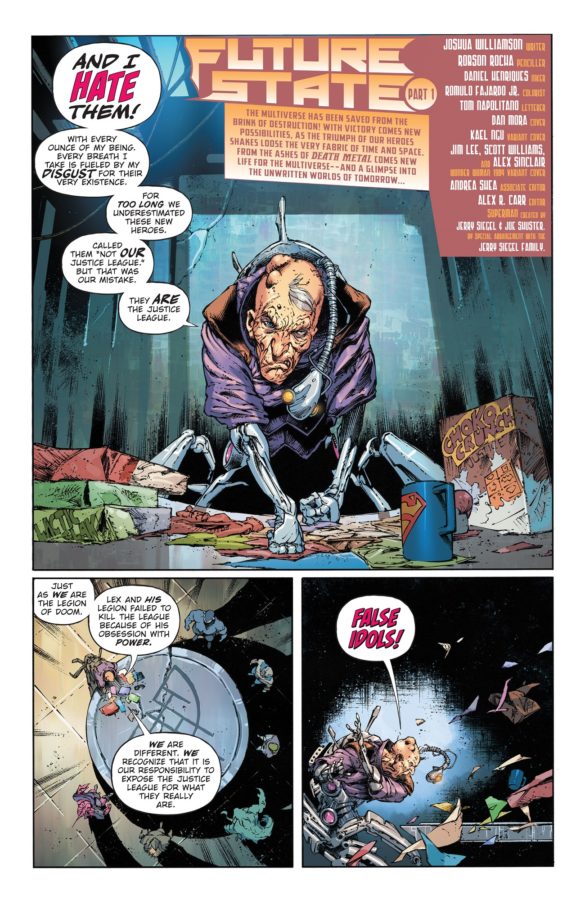 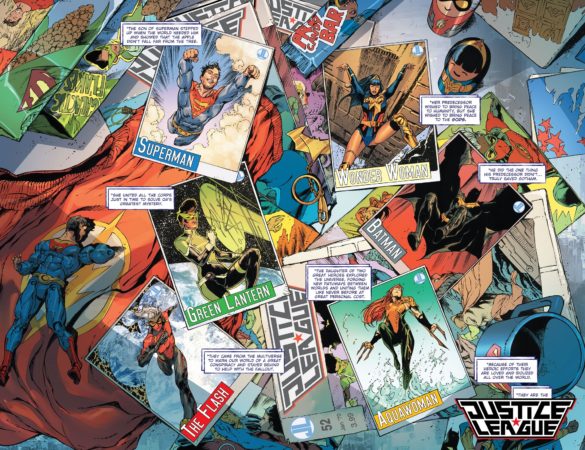 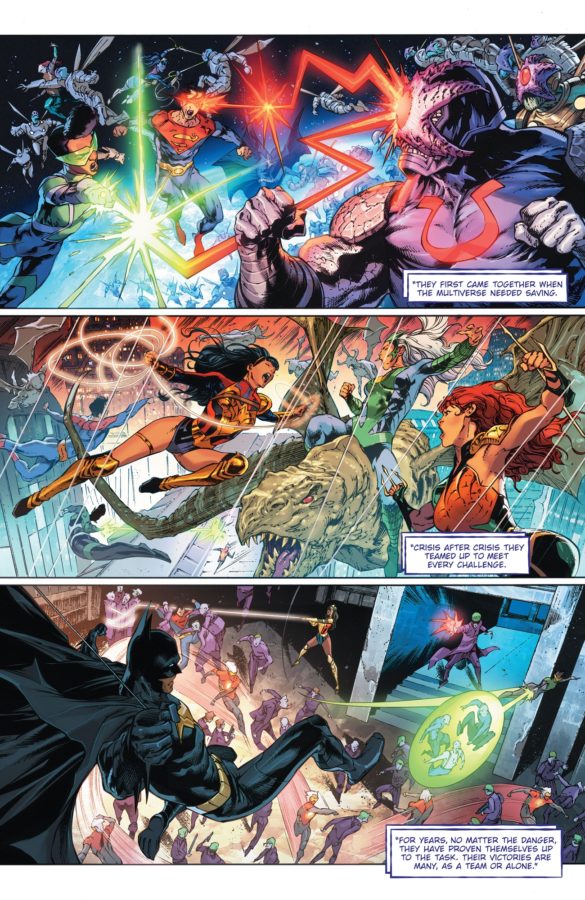 One of the things I enjoyed the most about this issue were its aesthetics. Robson Rocha’s pencils do a great job establishing not only these new character designs but also the setting. The Washington DC of Future State is a dark futuristic dystopia. This is never explicitly stated within the book; however, a crumbling Hall of Justice set against sleek futuristic architecture is a tacit indication of the status quo.

While Rocha’s pencils are fantastic, and Daniel Henriques does great work with his inks, what really brings this story to life is Romulo Fajardo Jr.’s color-work. This issue is steeped in vibrant neons, which are highlighted by the night sky. The book’s aesthetics border’s on cyberpunk, channelling some serious Blade Runner vibes.

When Future State solicitations were released, DC announced that the Future State: Justice League would feature a Justice League Dark (JLD) backup story. Little did we know that this would be a trend that will continue post-Future State. So yes, moving forward, those of you who frequently read these reviews will get two-for-the-price-of-one.

The JLD back-up lives up to its name, as this story is bleak. Set in a dystopian wasteland (are you noticing a trend?), this story follows the disbanded members of the Justice League Dark. Apparently, the ancient wizard Merlin returned to earth and waged war with those who wield magic. Merlin has amassed an army of “Hunters” who do his bidding. Charged with the task of killing magic-users, the Hunters maraud across the lands, setting magic users and their homes ablaze. 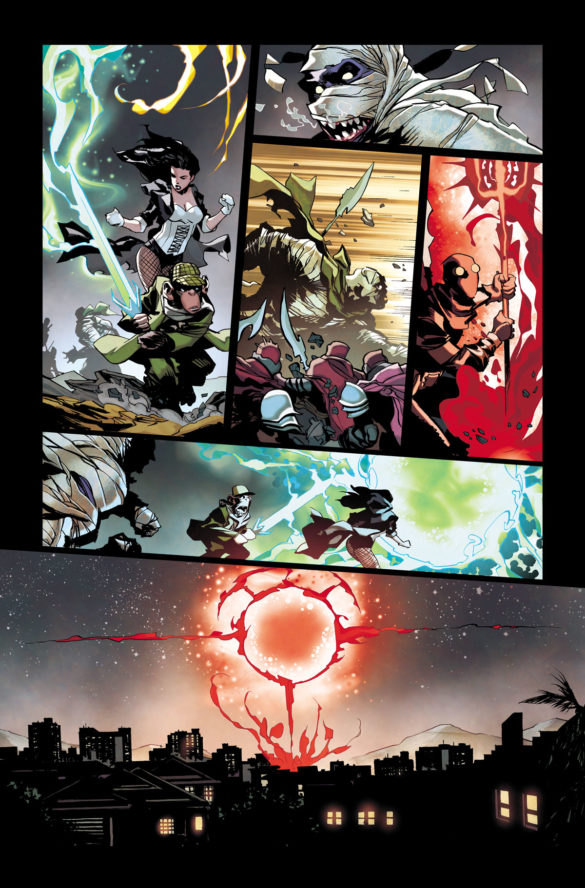 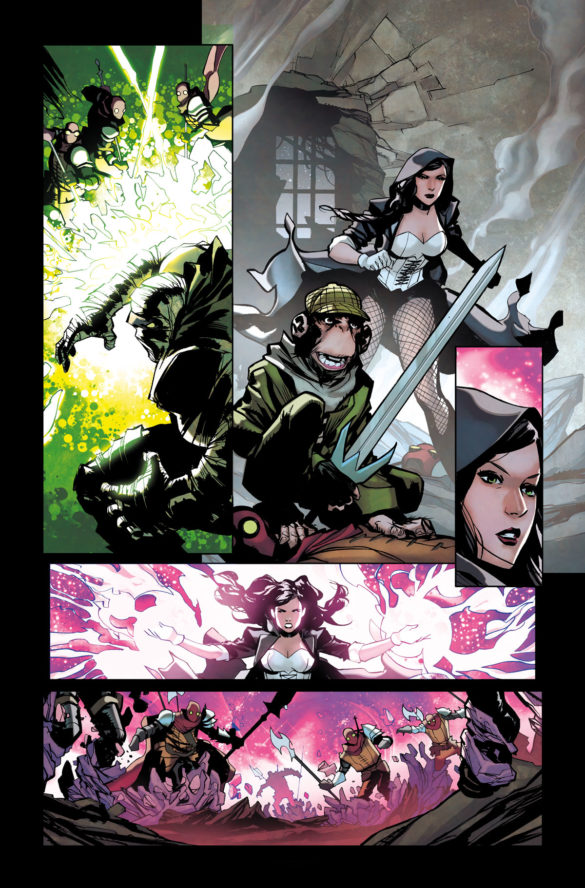 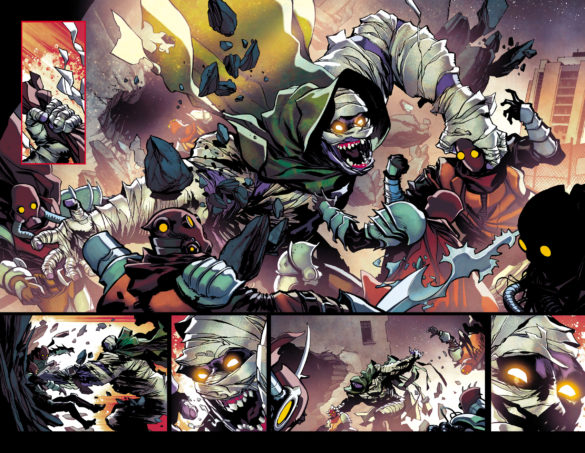 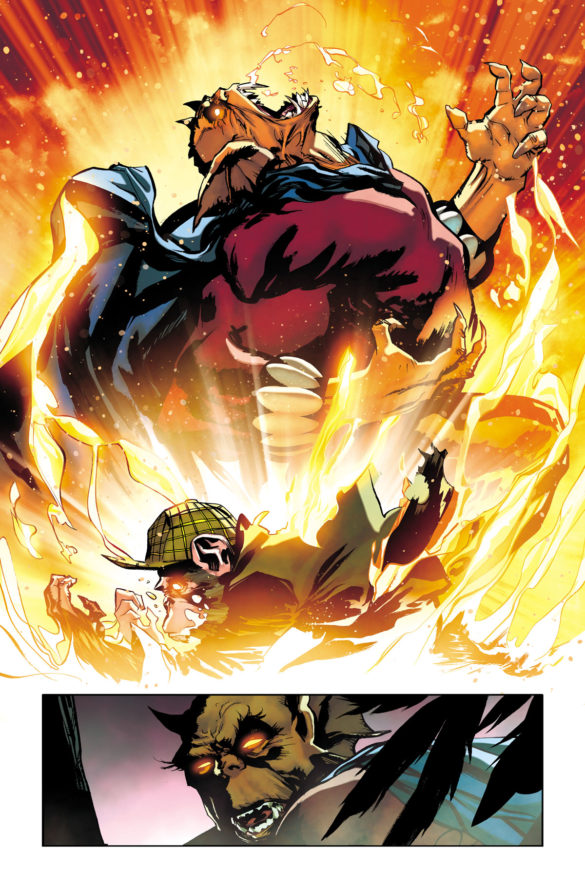 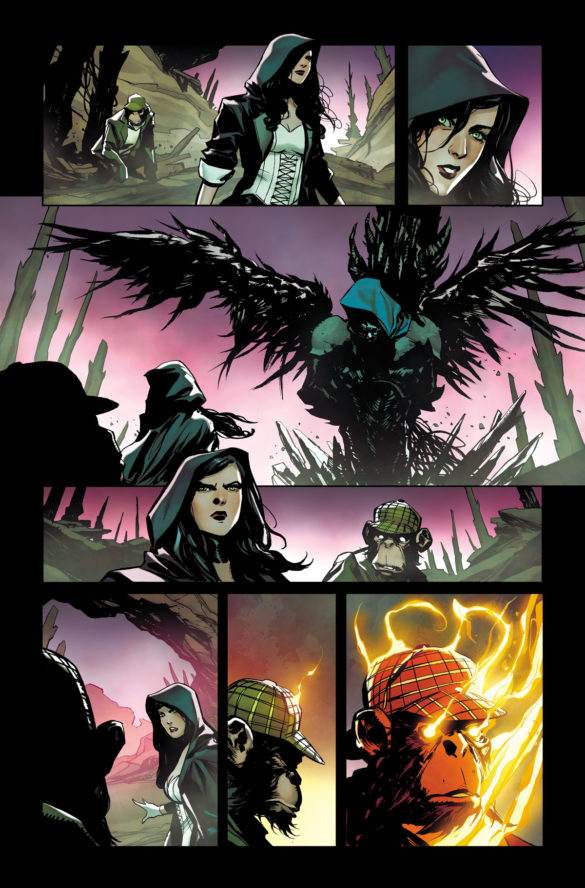 The Gang’s All Here

Ram V pens this tale, and his script is fairly good. It opens with Zatanna and Detective Chimp surveying the razed rubble of a town. Etrigan the Demon appears and gives them a tip about what Merlin might have been seeking – an amulet of sorts. This sets the story into motion, as Zatanna and Detective Chimp then reunite with other JLD members, which (I assume) will lead to the team’s last stand against Merlin.

Ironically, one of the strengths of this issue is also one of its weaknesses. This story lacks context. While I enjoyed it, it did leave me scratching my head at times. Reading this felt like watching the series finale of a TV show having missed three seasons Admittedly, I haven’t been following Justice League Dark; however, I have it on good authority that this story has nothing to do with anything that occurred pre Death Metal. So while I was confused by the status quo of many of these characters, apparently the disorientation was intentional. Some readers may or may not find this frustrating.

Marcio Takara and Marcelo Maiolo really lean into a brooding and grim aesthetic for this story. Frankly, the visual tone matches the story. Takara’s character designs are clean and crisp, but like the first story in this issue, it’s the setting that really sets the mood. The landscape he creates is hellish, and the opening background is jagged and burnt. Even when the heroes move to a more urban area, the setting remains dark and foreboding. Maiolo’s colors also contribute to this visual nightmare with ominous color choices shrouded in shadows. The two working together really create a gothic effect.

Future State: Justice League #1 is a lot to process. Both of these stories throw a lot of new concepts at readers, and then expect them to fill in the blanks. Nevertheless, Joshua Williamson and Ram V still manage to tell engaging stories, and both art teams did a great job bringing each script to life. For such an ambitious project, everyone did about as good of a job as could be expected. Honestly though, I have no clue how they’re going to wrap up these storylines with only one issue left. We shall see.

Final Verdict: Future State: Justice League #1 is ambitious, but it does a fairly good job of executing its goals. Give it a read.