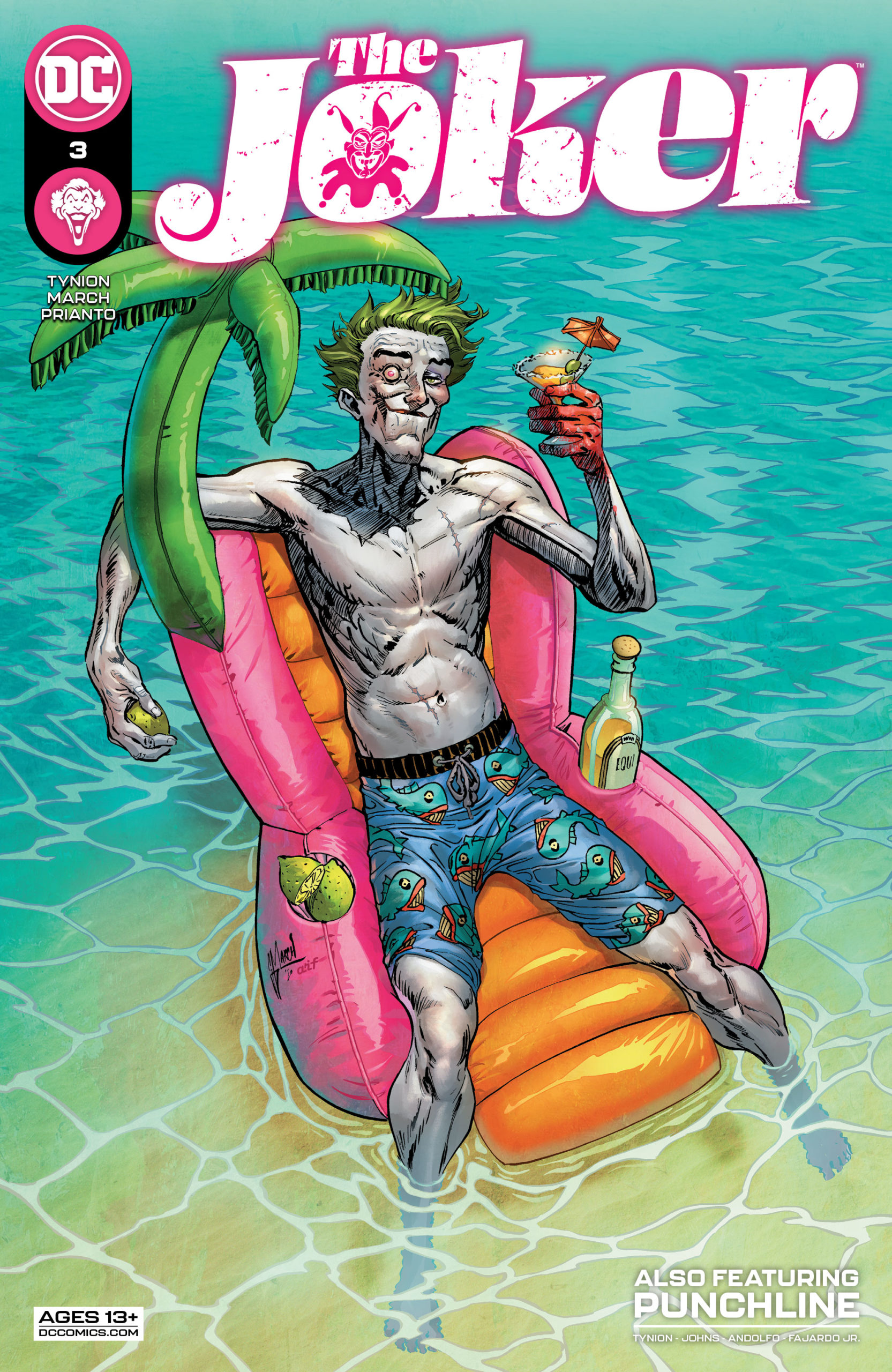 After last month’s issue with some big reveals, I had high expectations for The Joker #3. Jim Gordon has agreed to allow his daughter, Barbara, to make a case to not kill the clown prince of crime when he finds him, and the Joker’s preparing for war for what happened at Arkham. Were those expectations met for this issue? Yes… but they were nearly missed.

The first few pages of The Joker #3 are interesting, as there needs to be a great reason for pulling in The Killing Joke. The creative team mostly evokes a powerful meaning with its use. It’s not just the use of one of the greatest Joker stories that are of interest here; these pages establish the tone of this issue: exposition-heavy. Normally, I’m not one for heavy exposition, but it fits the noir feel that James Tynion is going for.

While it’s nice to evoke the past to tell a newer story, it’s nicer to have the story move forward. Gordon finally sets out on his adventure and gets to work. Again, there’s a lot of exposition, as he hits the ground to get as much information about The Joker as he can get, but it works. It also allows for the readers to get inside Gordon’s head, which is important for a noir story.

The final pages are easily the best (and won’t be spoiled here, so go read this issue now!), if not a little predictable. The dialogue is fun, the panels are intense, and the story takes an unexpected turn. The final page setup should make for an interesting fourth issue.

Tynion had some heavy lifting in The Joker #3. If you’re a fan of the written word, then this issue is for you – the writer eats up a lot of space on each panel with Gordon’s inner thoughts. For what this creative team is putting together, I think it works. This very well may one of the most noir-influenced stories I’ve read from a Bat-family title. The writing should be as deep and rich as Tynion is giving us, and I feel that this could easily be turned into a black and white, noir animated film.

I’ll continue to praise Guillem March for bringing that feel to the art. However, I’m still having issues jiving with how he portrays Gordon. Last month, I thought it had something to do with him in contrast to March’s Batman; however, he’s still off to me in The Joker #3. Gordon appears to be especially old and fragile; appearing to be more like Barbara’s grandfather versus father. Now, March’s work with The Joker in the opening pages is incredible. When the artist is drawing the clown prince of crime as a haunting figure to Gordon, he’s firing on all cylinders.

The backup story for The Joker #3, Punchline, continues to fight for my attention. Chapter 1 started on such a high note that the proceeding chapters, at least thus far, have fallen short of my expectations. Chapter 3 regains some of the opener’s procedural feel, but not enough to make it interesting. I’m finding it hard to care for the titular character and what comes of her against Orca and the other prisoners. The twist between Bluebird and Aiden brings something to the table that has me hoping for something more to come in Chapter 4, but this backup story seems to be losing steam.

Going off my thoughts from last month, I do wonder if it’s because Tynion and Sam Johns are limited in how many pages they can tell each chapter. It just feels like there’s a lot of fat that could probably be trimmed to tell a more interesting story, where there are stakes I actually care about.

That said, Mirka Andolfo’s art continues to stand out on these pages. I can see the argument of some of the panels having unfinished backgrounds, but that just helps pull your attention to the foreground in my opinion. Perhaps if Punchline was fully leaning into the procedural it feels like it wants to be, that background art would be more important; but for what this story is, Andolfo is crushing it!

Overall, The Joker #3 continues to deliver on the promises it began to make in the first issue. As a fan of wordier stories, I’m really happy with Tynion’s noir take on this Jim Gordon adventure. March’s art mostly compliments this, but he takes questionable liberties with the former commissioner (and another character in the final pages). Meanwhile, the backup story continues to slip in terms of plot. Punchline has plenty of potential, but Chapter 3 fails to capitalize on it.