“War For The Mind” 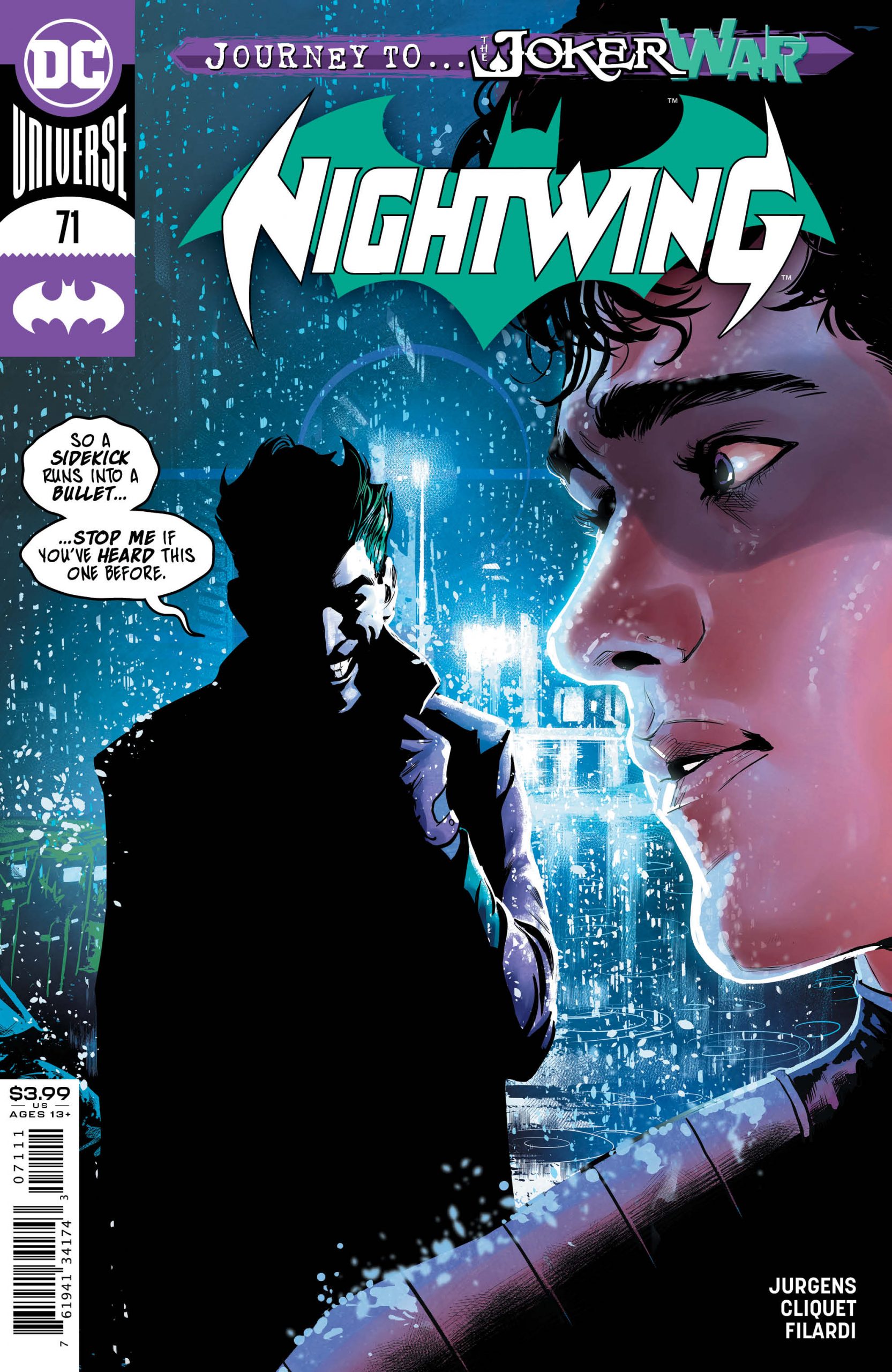 Nightwing #71 has been a long time coming, particularly after the way issue #70 ended! The last few weeks have seen the return of many favorite titles, but this series has been on my most missed list, for so many reasons.

Once again, writer Dan Jurgens has exceed all my expectations. With every issue he furthers the ongoing narrative, while simultaneously giving us vintage comic-book action, and throwing in more twists and curves than a bucketful of spaghetti.

The way this story works as a Nightwing tale, and as a prelude to the forthcoming “Joker War” event is superbly handled. We see Joker at his manipulative, maniacal best, and every other character is left reeling in his wake. Oh… and we get a line that many Nightwing fans have been dying for since the amnesia arc started, way back in issue #50:

Joker: Yuck. No one likes that name. 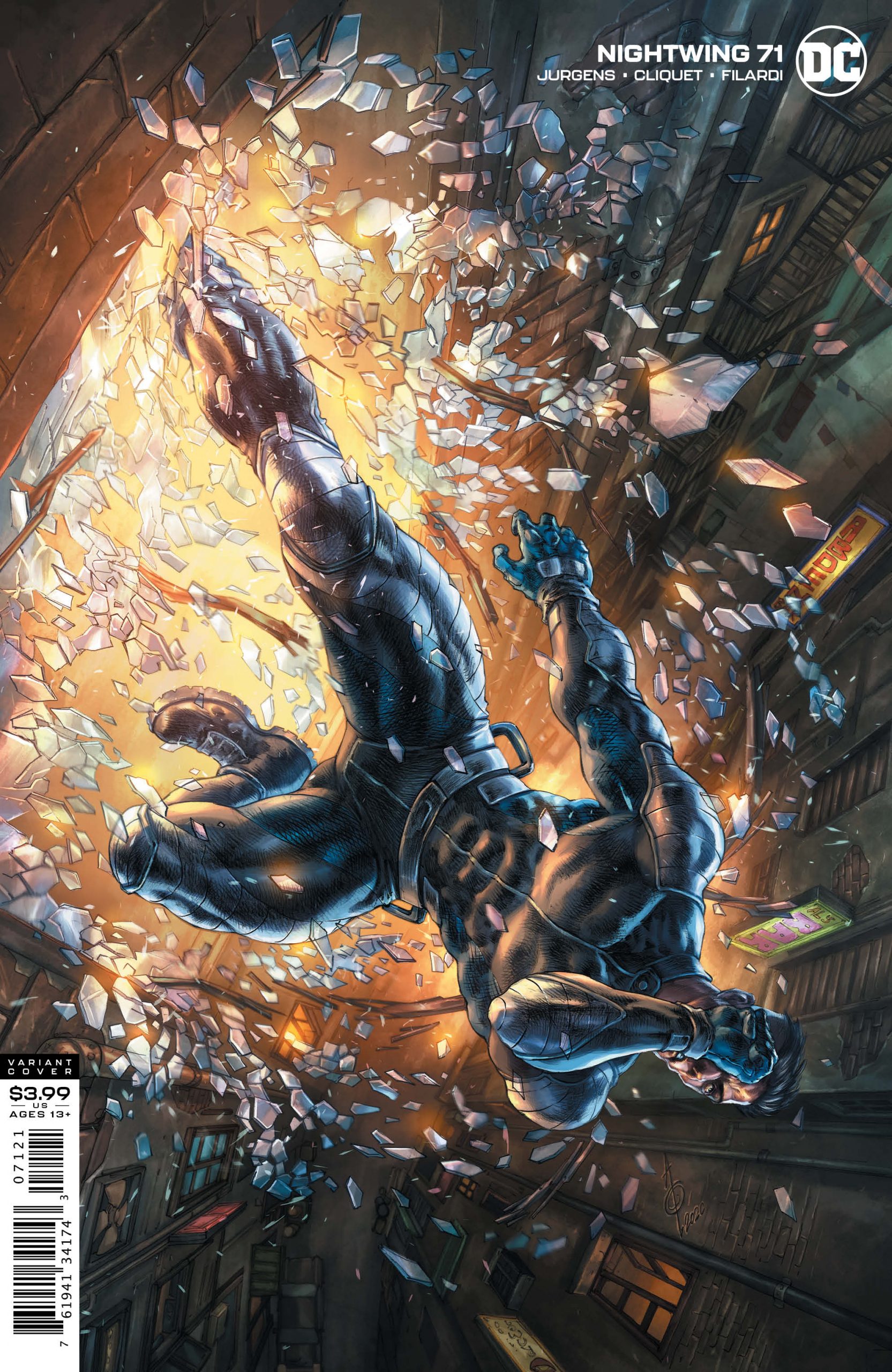 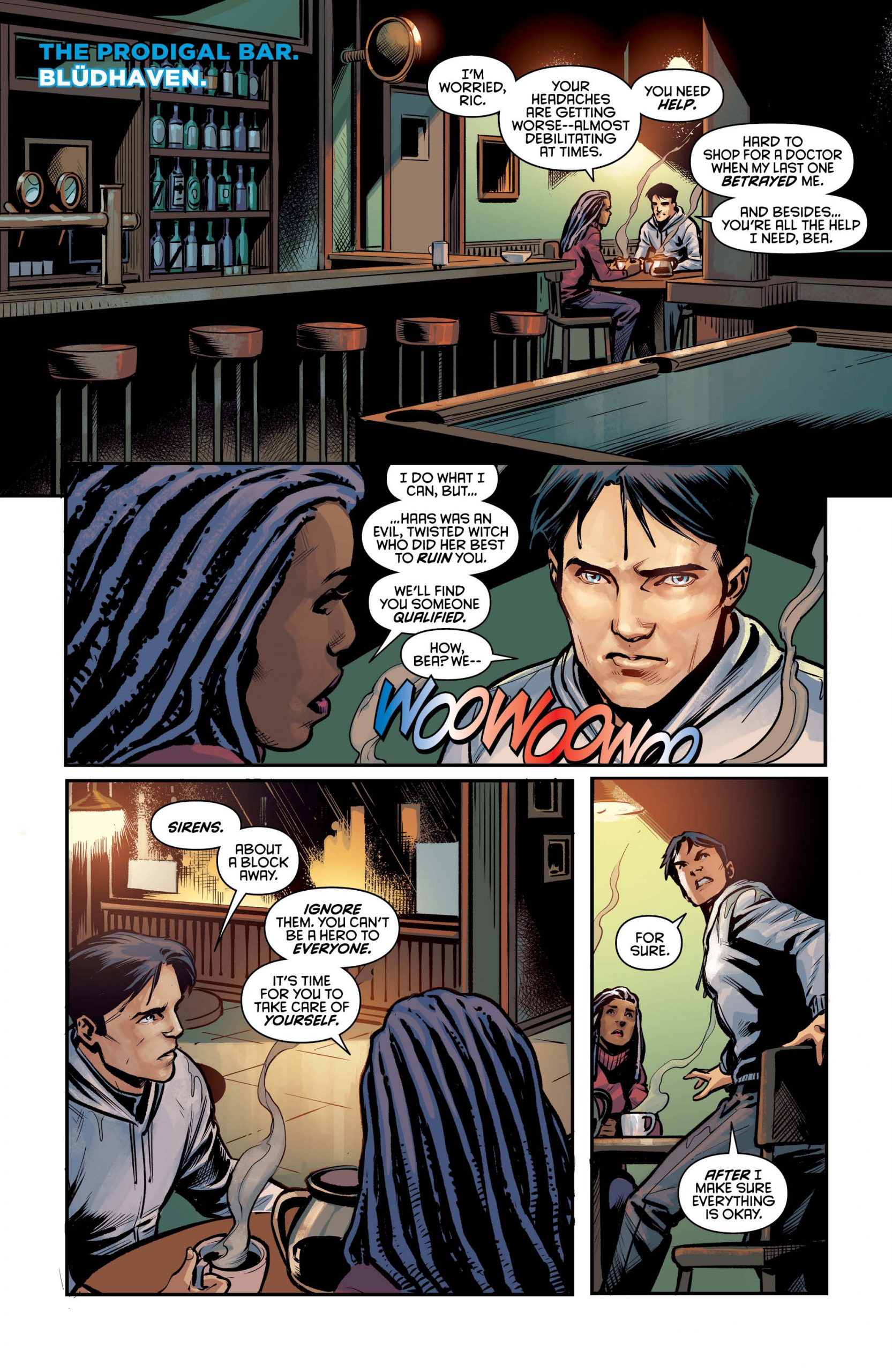 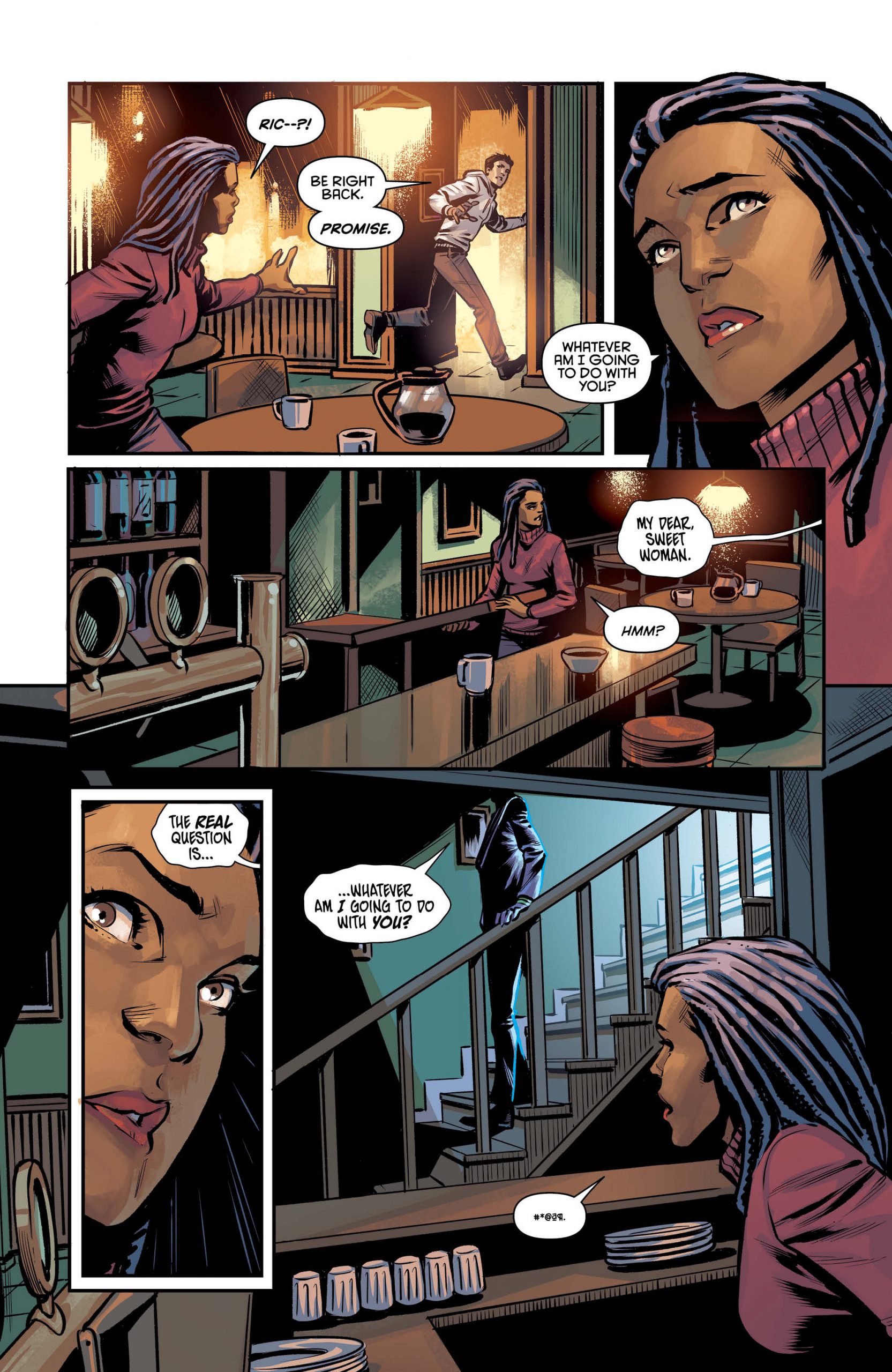 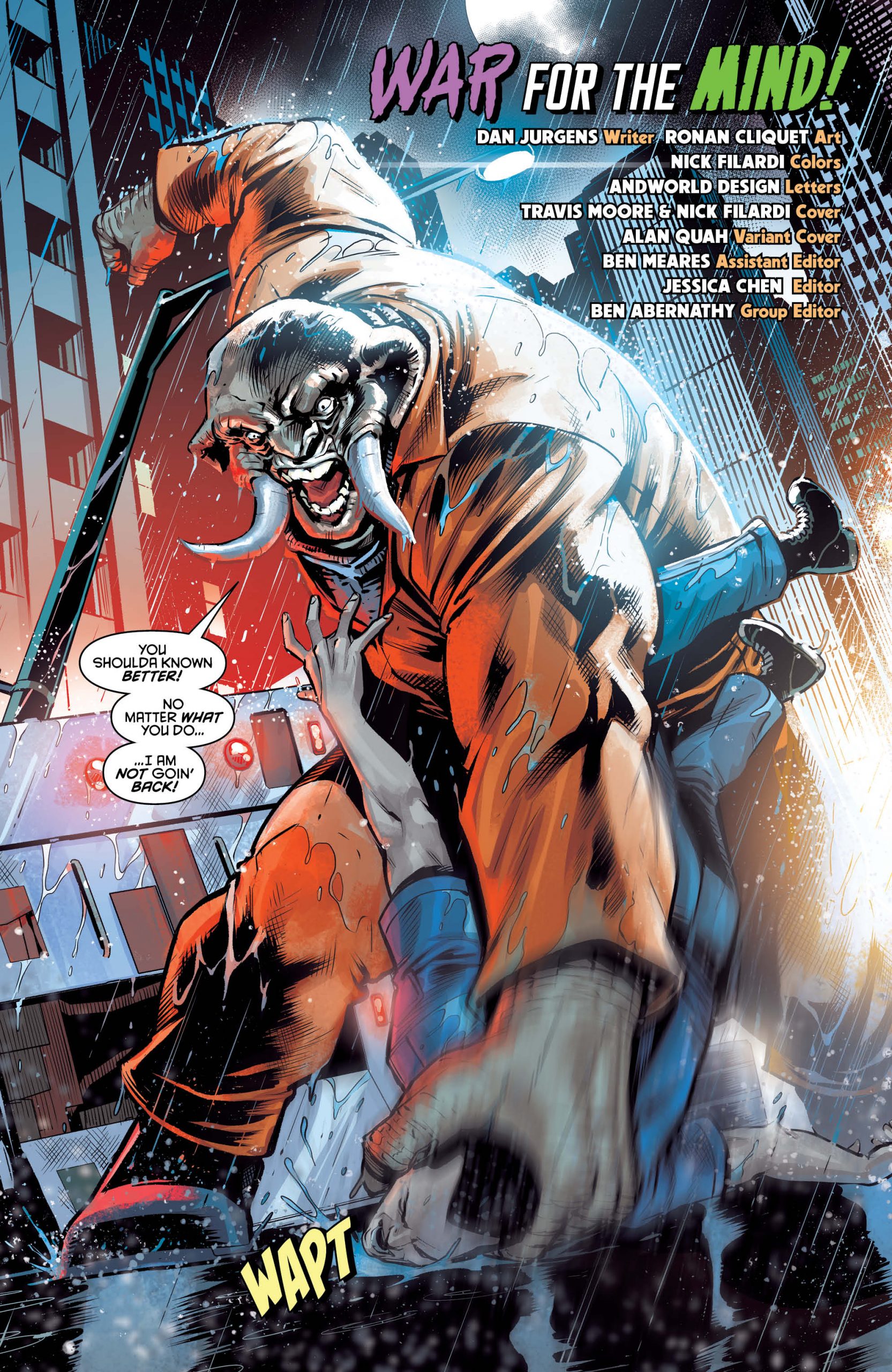 I mentioned above that this series was one of the ones that I was really looking to returning to our shelves. The incredible art by Ronan Cliquet and Nick Filardi is a main contributing factor. I don’t know which of these incredibly talented gentlemen is responsible for the speed blur. where Tusk gets his mitts on a very unfortunate police officer, but the way it’s handled by both artists is brilliant. I can feel the villain’s power and ferocity, and the page just works on every level.

The effect is made even more surprising, as it follows on from the warm scenes in Bea’s bar on the preceding page. Nightwing #71 is comic-book storytelling at it’s finest. The writer grabs our attention, then cuts away at a critical moment, to a scene every bit as engaging, where the artists hit us in the gut with kinetic force, and vibrant color.

AndWorld Design are on fire too! Joker’s dialogue balloons are as chilling as the Clown Prince himself, and sound effects are used brilliantly throught the issue; from red and blue siren wails, to the wonderful sounds of violence that follow, the lettering in this issue is first rate.

Man, it’s lovely having new comics to read again, and this title is one of the very best. I know I keep harping on about this, but “fans” who have boycotted this book are really missing out. If Joker’s line isn’t something that will make them want to pick up Nightwing again, then what happens at the end of the issue surely will. Boyoboyoboy… talk about out of the frying pan!

Thank goodness the wait for issue #72 won’t be another 2 and a half month one!