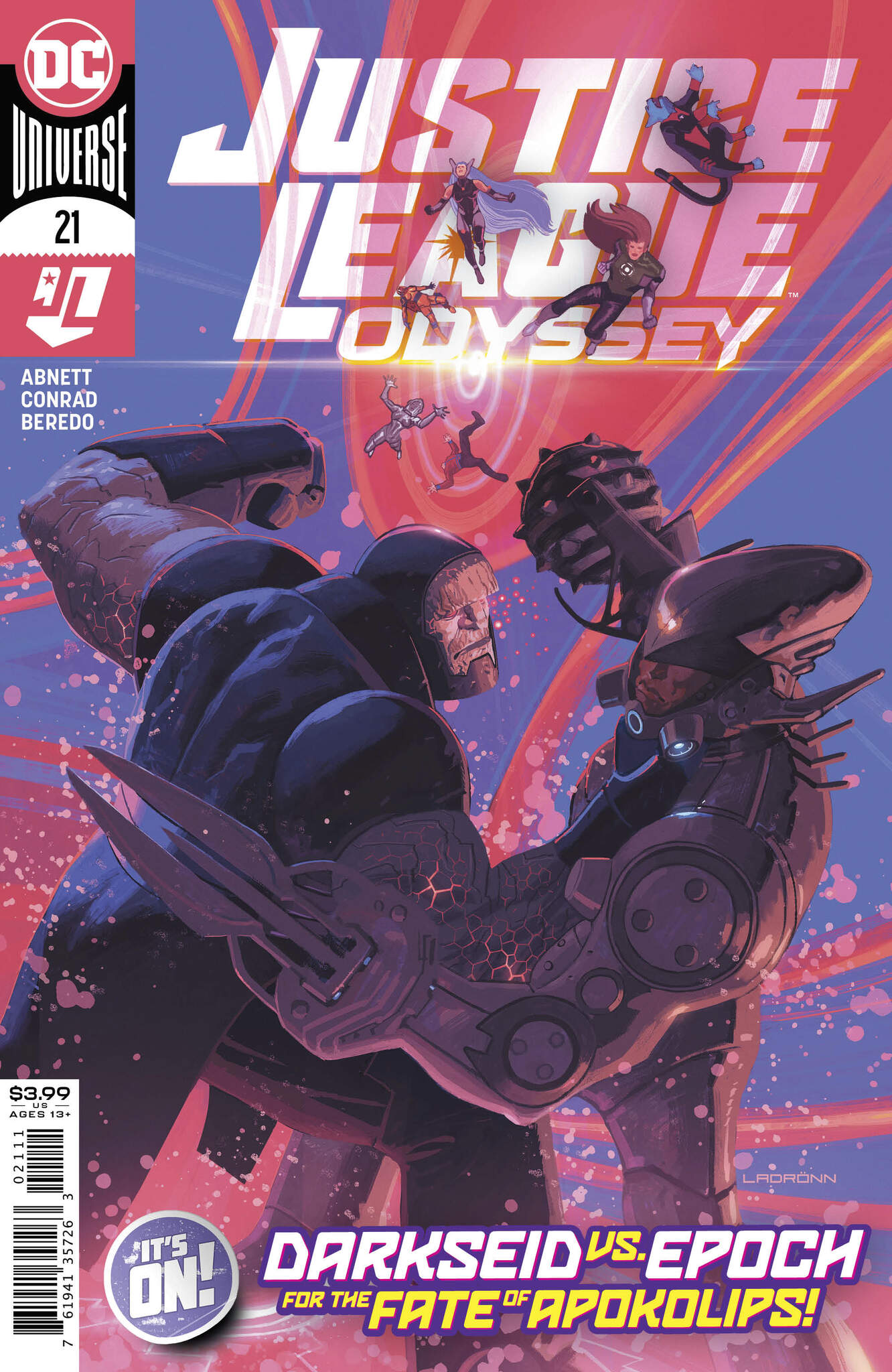 In Justice League Odyssey #21, after failing to neutralize Epoch by stealth attack, Darkseid launches an all-out strike! Cyborg, still under the villain’s control, shows where his loyalty lies when Green Lantern Jessica Cruz learns about the Lord of Apokolips’ plan. to not only remove the self-proclaimed Master of Time, but also take control of Epoch’s technology and obliterate the universe’s biggest threats!

Apparently “Temporal Dislocation” calls for some multitasking in the way of Epoch working himself into three forms. The Master of Time is bent on erasing Darkseid from the timeline, and re-forming it in his version of Utopia. All that calls for the ultimate multitasking. Holy Doctor Manhattan!

Jessica Cruz tries to appeal to Epoch to let him know his plan is not going to work as Darkseid is there to steal the Revision Mechanism, and that’s where the action really takes off! 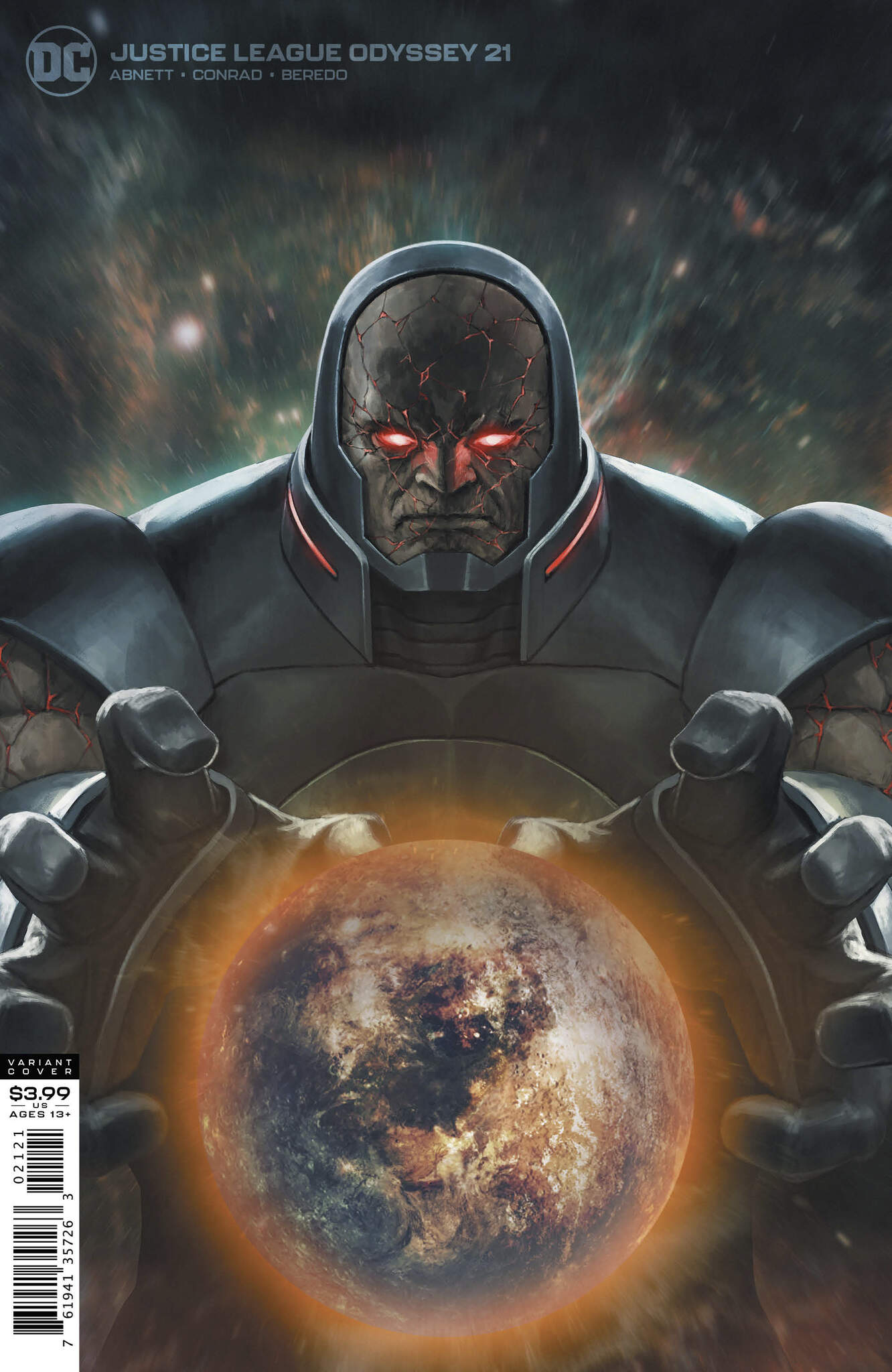 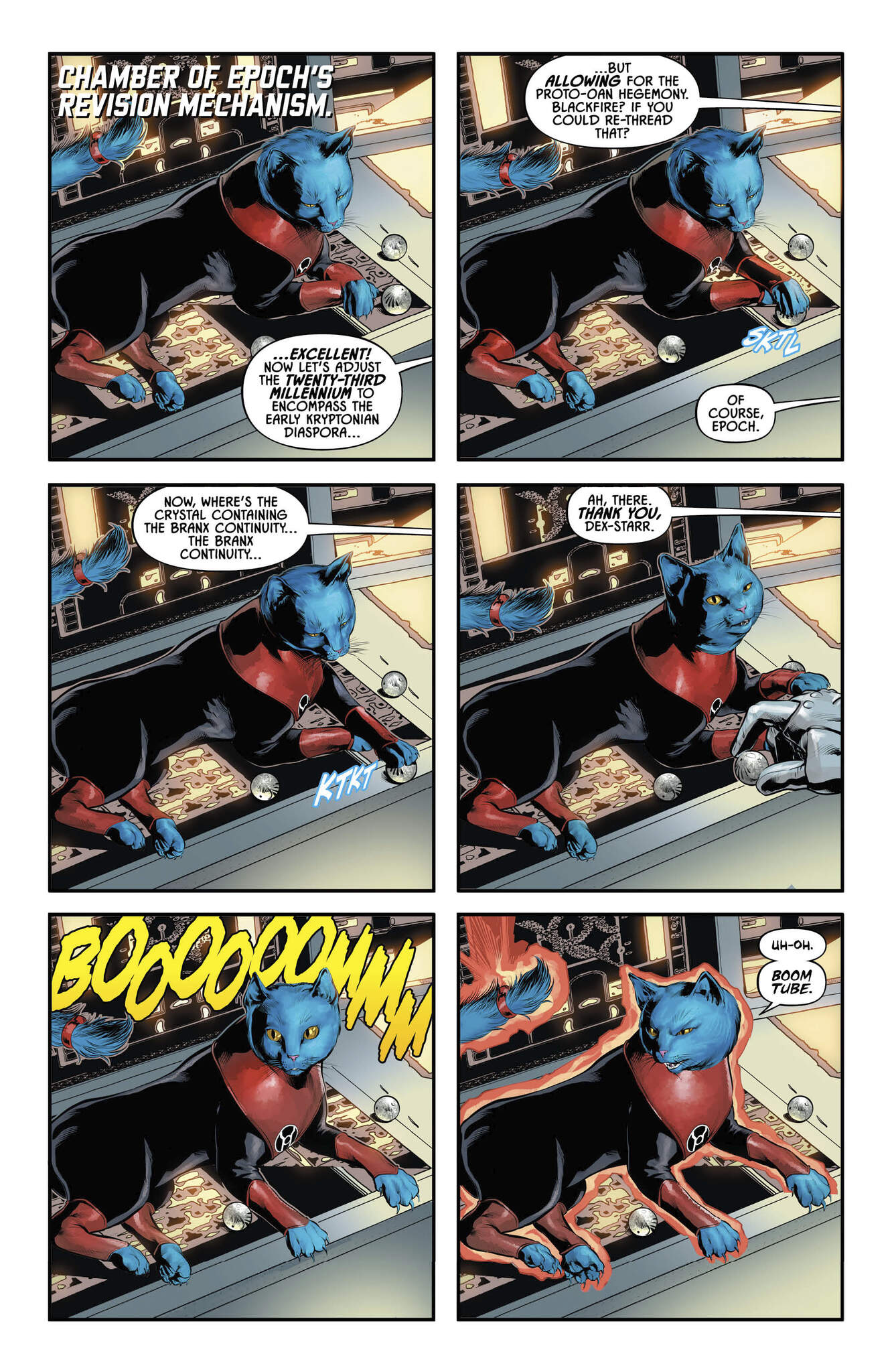 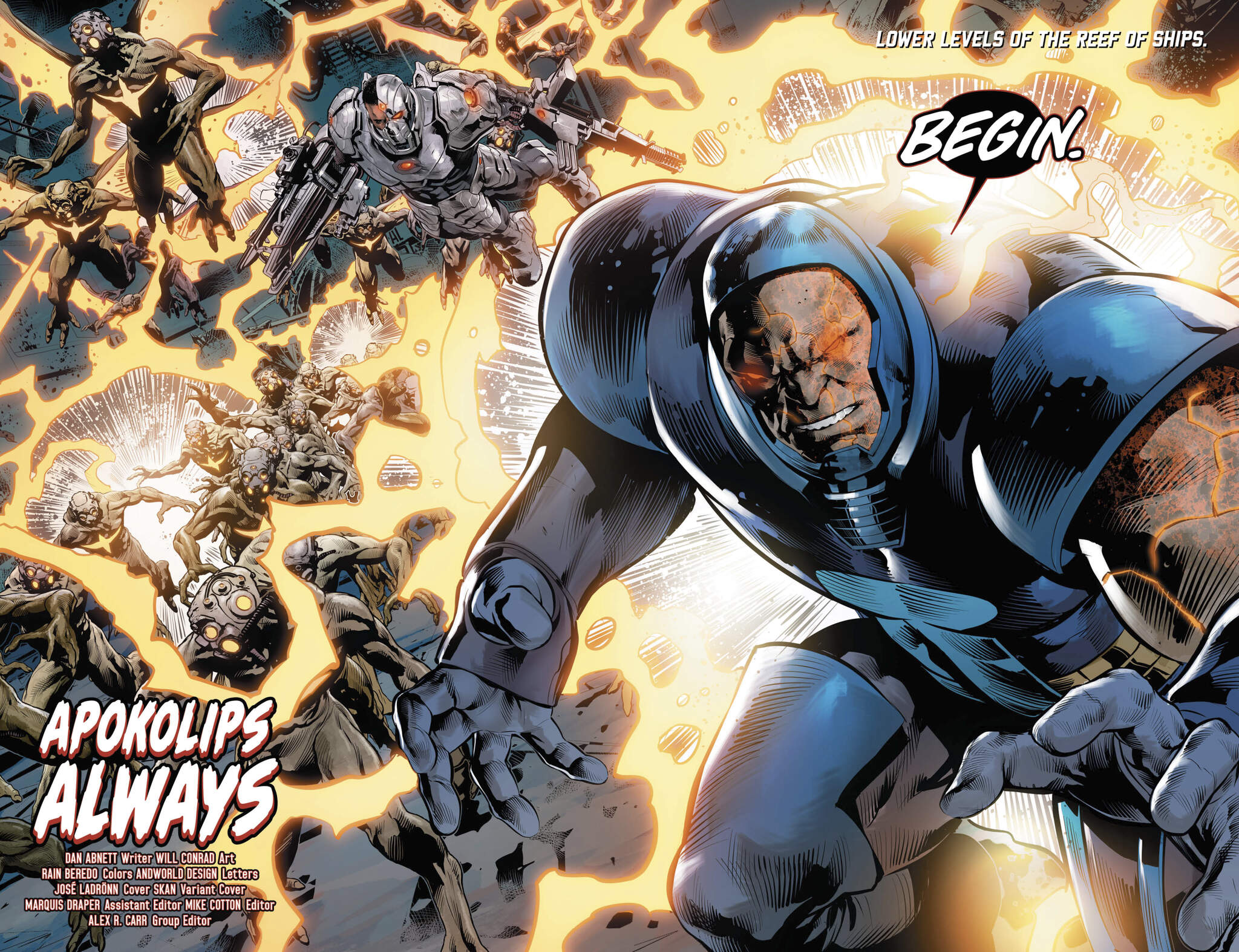 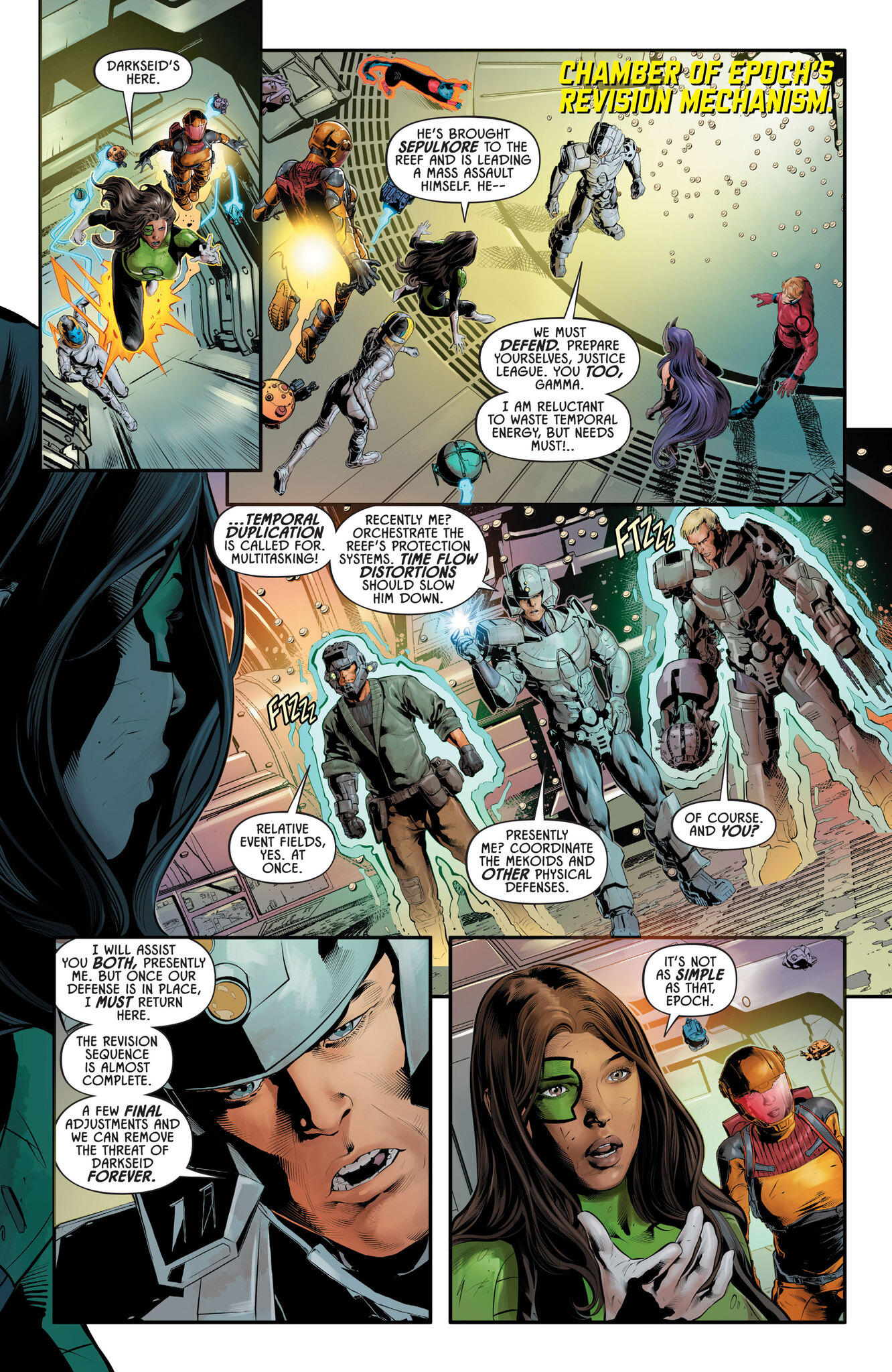 Dex-Starr (why is he not in the Catwoman comic?) is cloaking the Eskaton in hopes that they spring it on Darkseid to destroy him.  In this case, the smallest of members is doing the heavy lifting to deny Darkseid.

Will Conrad’s depictions of these characters are on fire in this issue. There are frames where Jessica Cruz exudes as much power and charisma as Wonder Woman. The artist draws the outer rim of space. where all of this is taking place, with such precision that you find yourself actually searching for oxygen as you read.

It turns out closing the loop is more than a literary device, or a business strategy. Who knew that temporal recursions are a thing? What?  Again, Dan Abnett gives you verbal clues of Epoch’s language, and the reader has to dive deep a bit, to invest in the high brow language of Epoch. Abnett’s writing delivers an interesting connect the dots.

Darkseid… Epoch… and with the snap of a finger/bubble, a major shock! Has Dan Abnett re-watched a bit of the last Avengers movies? This rewriting of a timeline and eliminating a character by a snap of a finger… I’ve seen this before. Then again, this could be as much satire as homage. Darkseid was taking no prisoners years before Thanos even existed, after all.

New readers would have quite a challenge on their hands with Justice League Odyssey #21, as this is really deep space action. We have a severed League that’s on the brink of being destroyed, and Abnett’s writing could confuse some. Thankfully, Will Conrad saves the day with his pencils.

Let’s hope he helps with next issue’s story line!