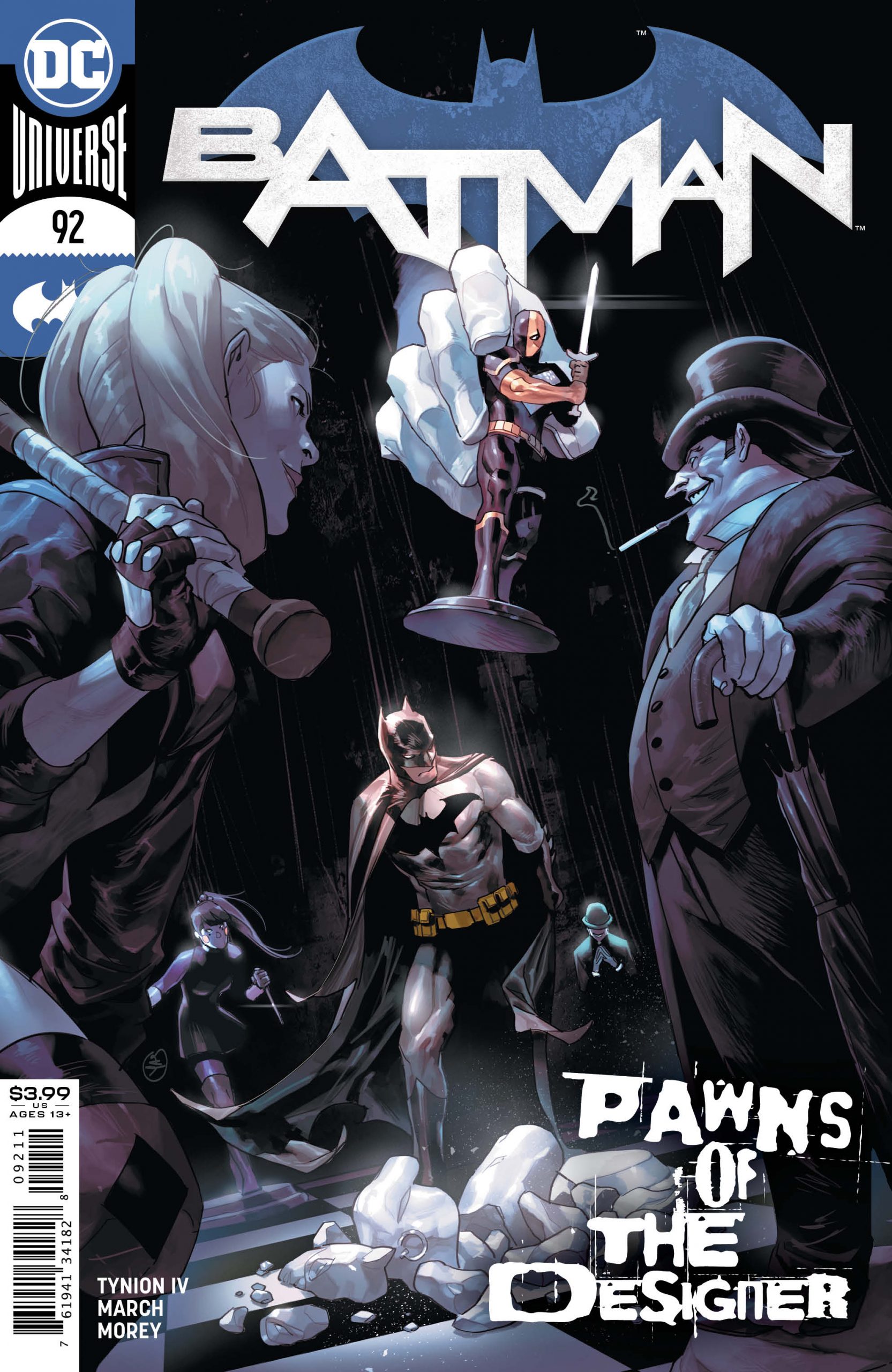 While Batman #92 promises Batman’s battle with the new villain the Designer, this chapter feels more like a hodge-podge of other narratives.

This issue is a mixed-bag. There are some wonderful ideas and plot progression, and we finally see Batman meet the main antagonist. It took us over six issues to get there, but it happened. Fortunately, one good thing about writer James Tynion’s drawn-out plot, it built up the Designer, giving readers a sense of anticipation. Now that we finally see him in the present day and in-person, it will be interesting to see what he does moving forward.

We also finally get Punchline’s formal introduction. There was a ton of hype for her, and it mostly pays-off. Harley Quinn’s reaction to the Joker’s new girlfriend is exactly what fans hoped for. It’s funny, while establishing Punchline as a credible threat. Once again, Tynion leaves the main conflict between the two for the next issue. Fortunately, fans at least got enough of a taste of Punchline to make the impending duel exciting.

Despite it being so late in the story arc, Tynion introduces yet another new character: the Underbroker. He is only used as a plot device for now. However, Tynion gives him enough of a personality so that readers are interested in seeing him in future story lines. 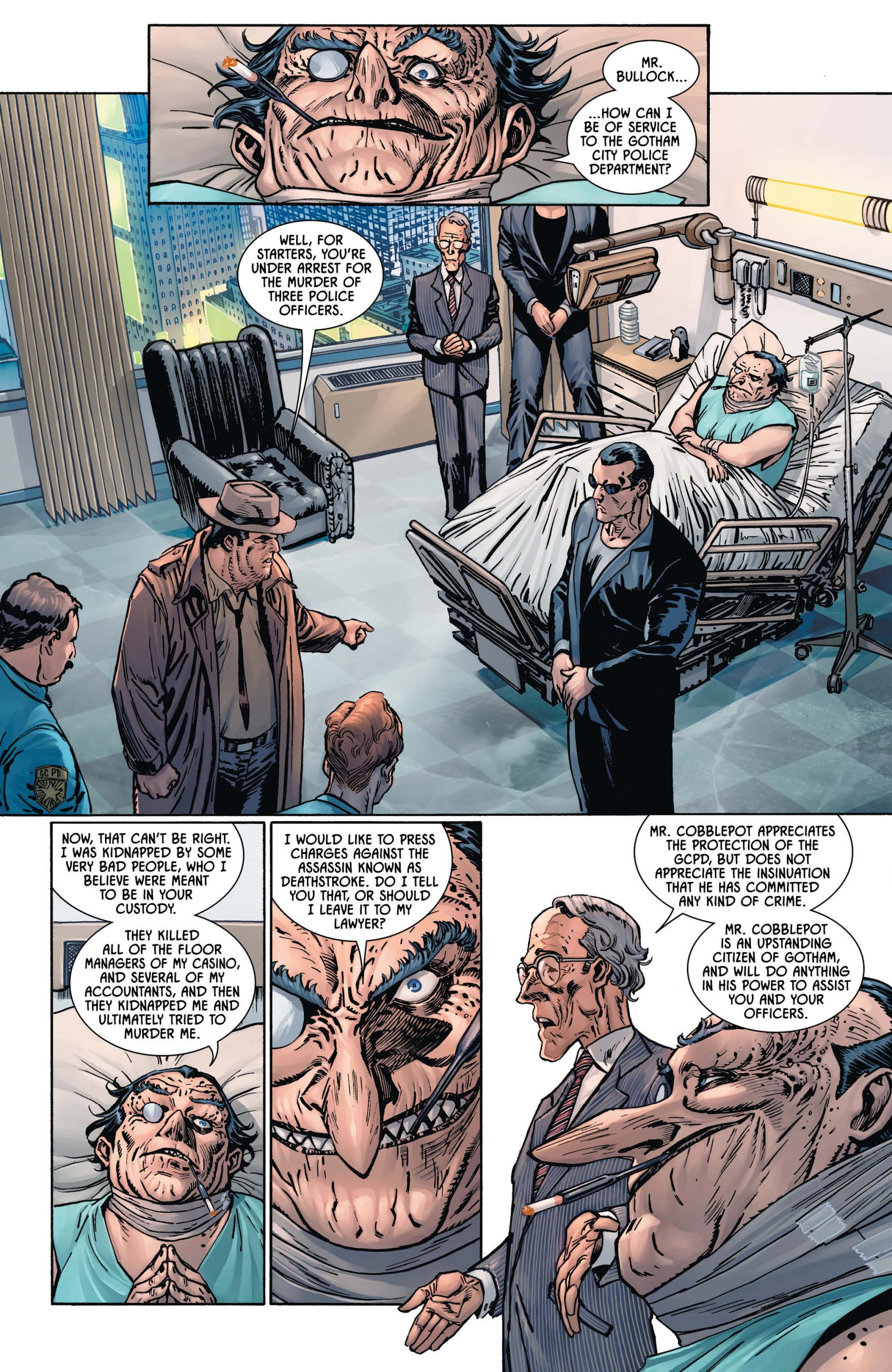 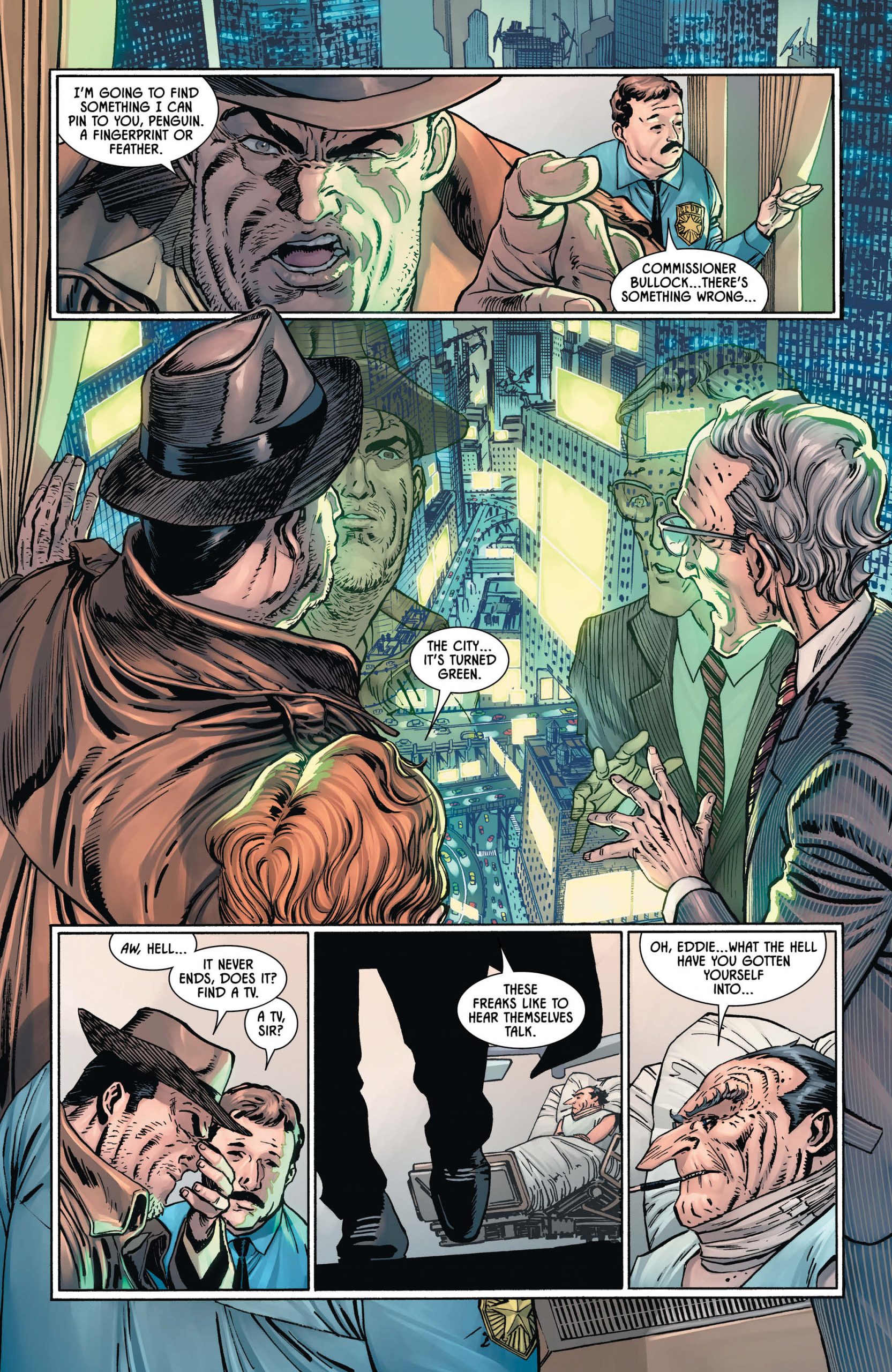 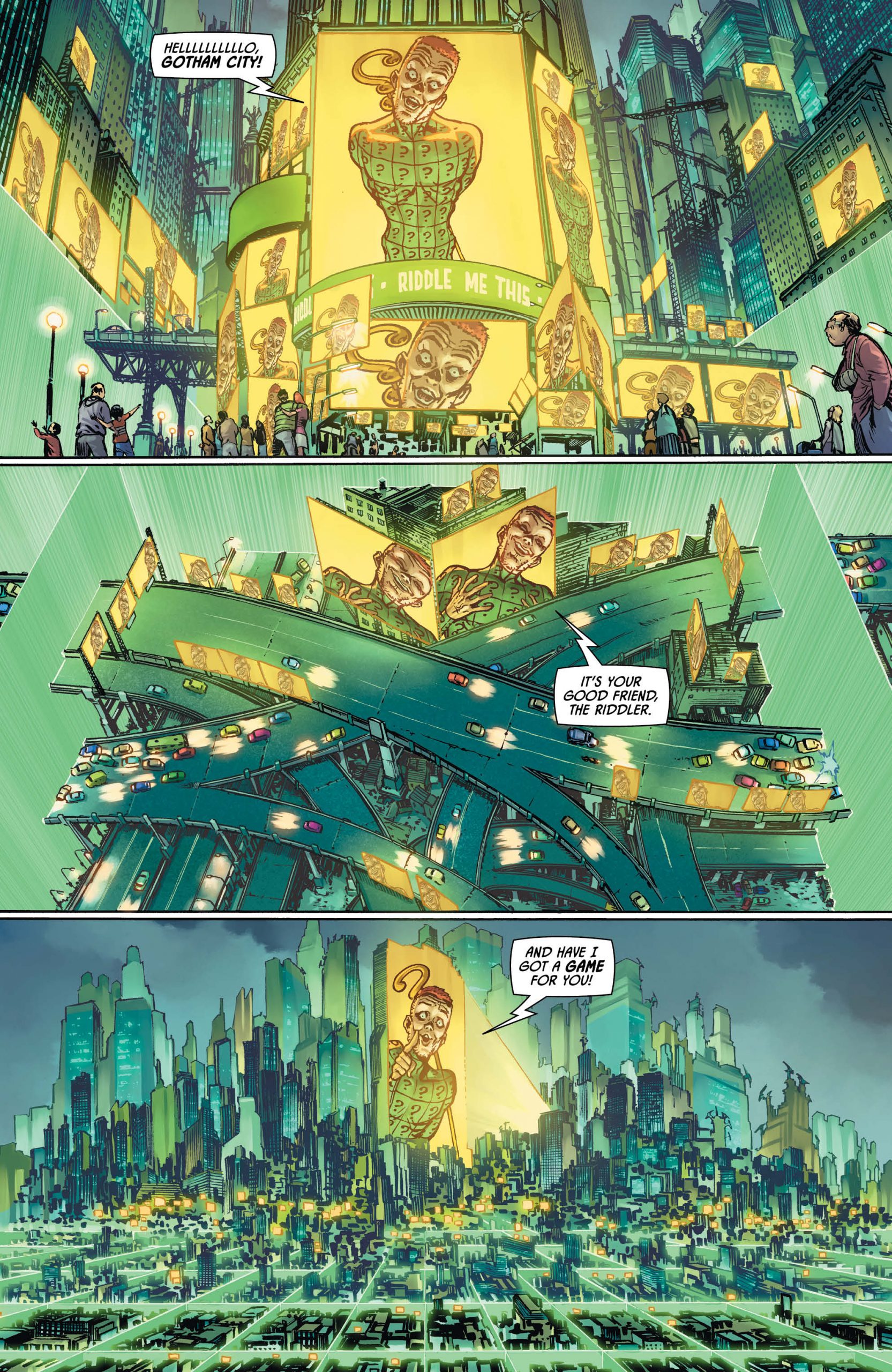 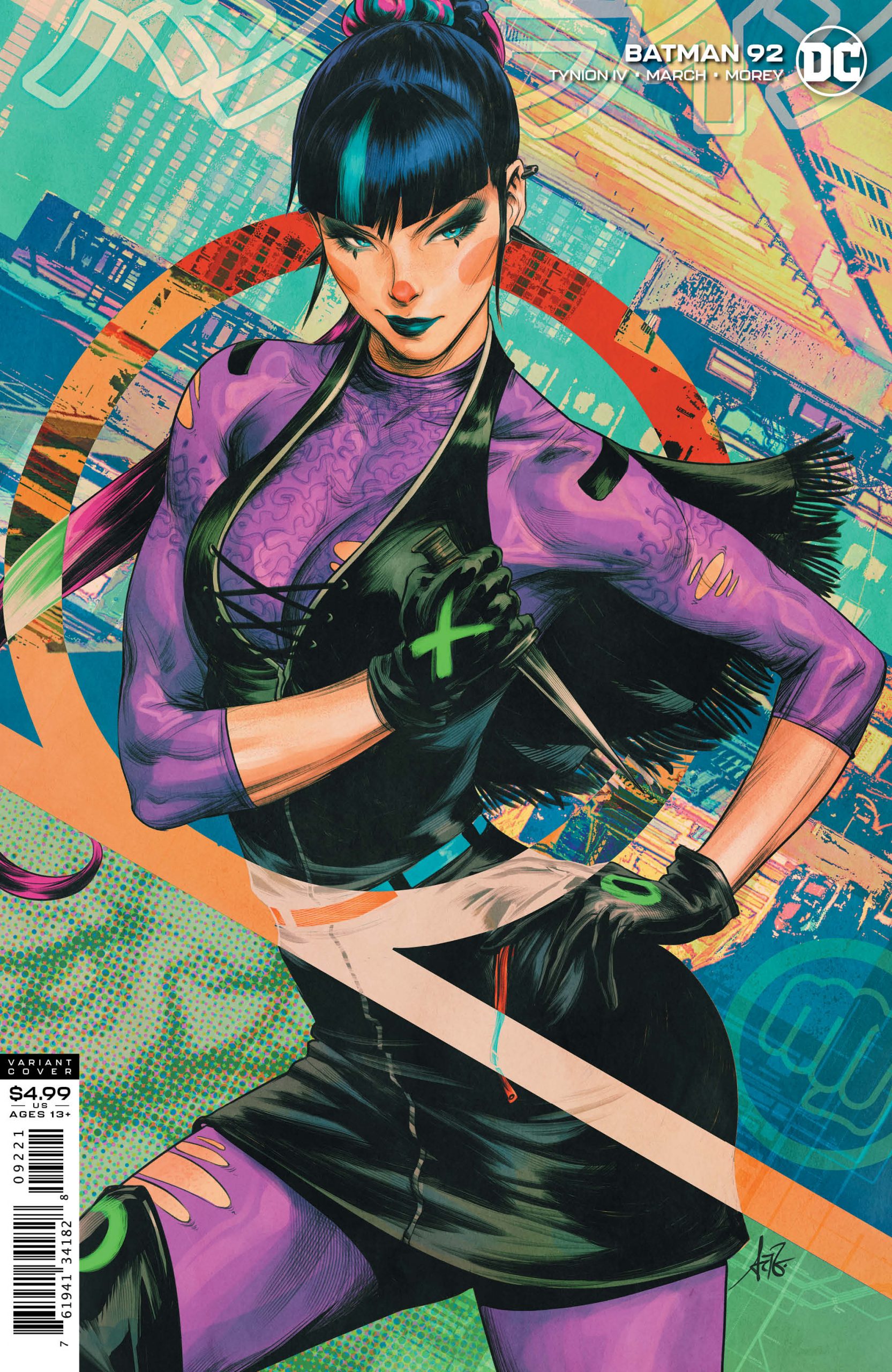 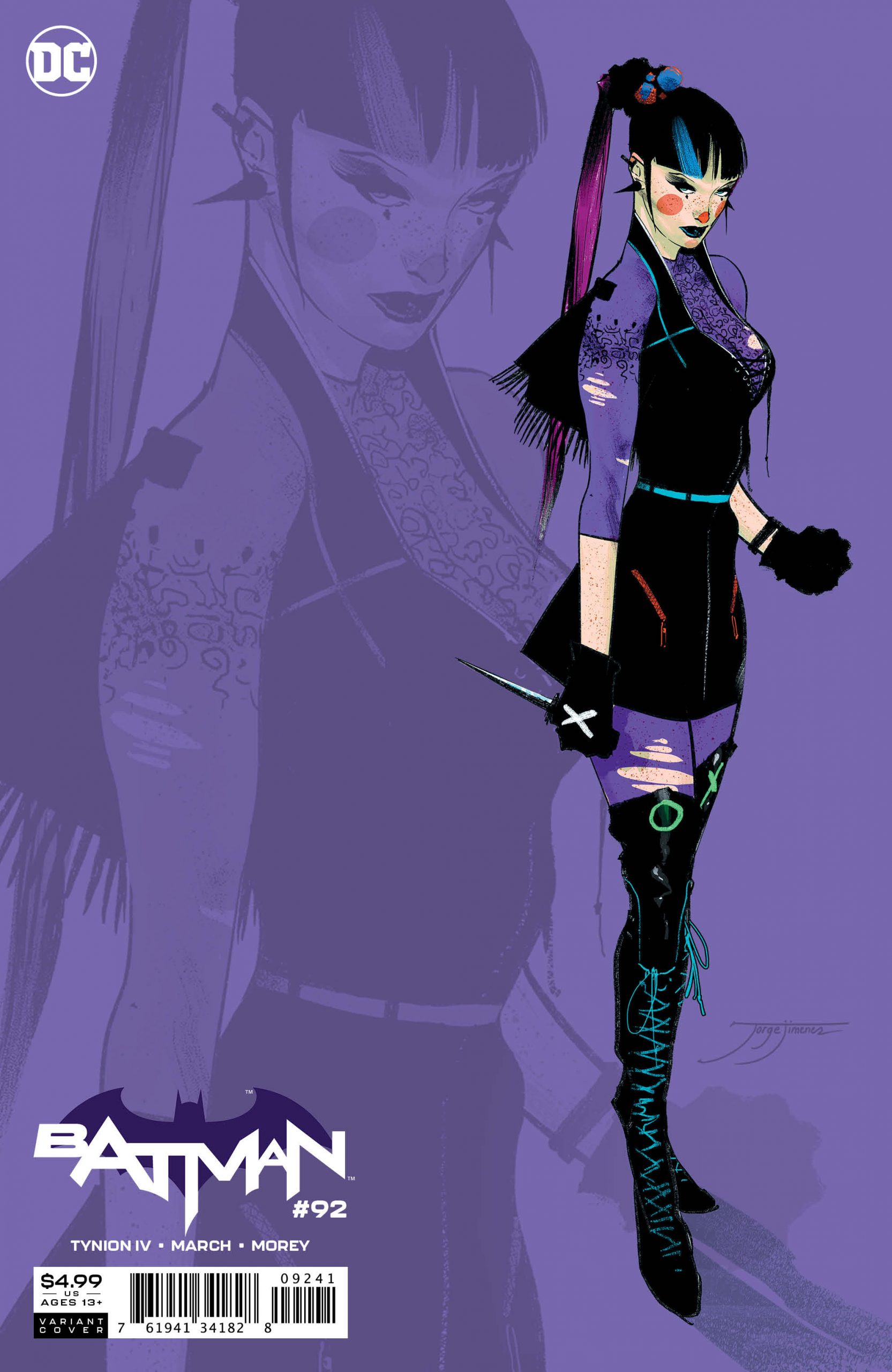 It’s also great to see a consistent visual style for an entire issue. The previous chapter boasted no less than four different artists working on it. Here, Guillem March illustrates everything. His art always showcases expressive characters and dynamic action beats. He exaggerates everything, including anatomy for the sake of drama, and it looks awesome.

Too Many Plot Threads

Unfortunately, the highlights do not save Batman #92 from feeling decompressed to me. This whole arc feels very long and exhausting, with part seven, going onto part eight. There are too many subplots that have either been stretched too long, or have little to do with the main narrative. The main antagonist of the issue is the Riddler, but he accomplishes nothing, nor does Batman even feel challenged by him. The Designer’s motivations or backstory could have used this story-telling space instead.

Another weird thing is how Batman and Deathstroke’s epic fight ends off-panel. After a couple of issues of build-up, it abruptly ends to start a new conflict. Why is it structured like that? It’s unusual having so many plots being juggled, when the main one’s still pretty thin.

It is almost as if Tynion is afraid that readers will get bored, so he’s throwing in another crisis to re-engage them. The worst part is, most of the plots aren’t that engaging. Probably the best one is Batman and Catwoman’s reactions to her past villainous acts, but that’s been shoved to the side, in favor of a Harley Quinn team-up.

While Batman #92 has a lot of slam-bang fun, it’s still structurally a mess. There are too many things happening, and it’s taking too long to get anywhere. This comic is both too fast-paced and padded at the same time. Not even amazing art by March could hide the issue’s weaknesses.