CW Producer Explains Where Batman Is During ‘Elseworlds’ Crossover 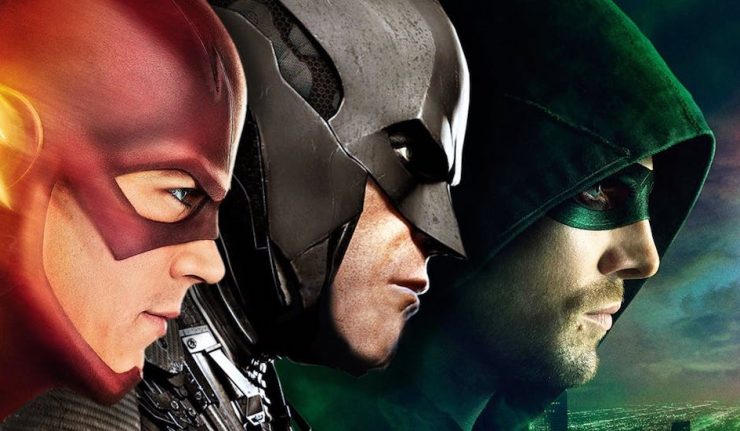 As you may be well aware, the DC superhero shows on the CW will be airing their annual crossover event, entitled Elseworlds, next month. In the crossover, Green Arrow, the Flash and Supergirl will be traveling to Gotham City to face the psychological villain John Deegan, who works at Arkham Asylum. When our heroes arrive in Gotham, they don’t find the Bat ally they were expecting.

Instead of the Dark Knight Detective, Batman, they bump into Batwoman, portrayed by Ruby Rose.

Now, the issue with connected worlds and universe sharing that is all the rage in film and television nowadays, is it sparks questions. For example, if such nefarious things are happening at Arkham Asylum in Gotham City, why isn’t Batman doing anything about it? Why do the Flash, Arrow and Supergirl have to travel to Gotham and team up with Batwoman? This feels like something that would fall under the Bat’s umbrella.

Well, in an interview with EW, the consulting producer of Elseworlds, Caroline Dries – who is also executive-producing the standalone Batwoman spin-off series that will branch out of this – explained what happened to Batman.

Our approach is: What does Gotham look like after the Batman has been gone for three years? So if you have the law and order, protector, and hope gone, what happens as a result? Some people are thriving in his absence because now they can start to do their own thing without the oversight. A lot of other people are suffering and they’re losing hope, and the city itself and infrastructure is falling apart. So it’s not a happy place. Our guys walk into a grimy, scary Gotham.

Arrowverse producer Marc Guggenheim even goes on to describe Gotham as a “Dead city” in the CW universe.

The way I sort of described it to Stephen [Amell] is, it’s there but for the grace of God goes Star City. It’s the worse case scenario. The reason no one talks about Gotham is the city might as well be dead. It’s practically a ghost town.

So that settles the looming question of why doesn’t Batman do anything about this? For some reason, perhaps that will or will not be explained in the crossover event, Batman has been gone. Perhaps he is off-world, on a mission with the Justice League. Perhaps he stepped away for further training. Perhaps something else, but it explains why other vigilantes, such as Batwoman, rose up in his absence. It explains why Gotham is having issues. And it also, retroactively, explains why he hasn’t been a bigger player in other events in previous Arrowverse seasons.

In fact, the CW’s version of Batman is one that people aren’t quite sure is real or not. Per Grant Gustin, who stars in Flash as Barry Allen, Batman is more of a myth at this point. A myth that Oliver Queen does not believe in.

Oliver is like, “He’s not real! They’ve made him up! It’s a hoax just to scare the citizens.” Barry is flabbergasted by that and all he wants to do in Gotham is meet Batman. It’s a pretty funny scene.

One of the best parts of Batman mythos is when he is seen as more of a mystery, a myth or a legend to the other characters. It adds this aura around him that the other characters can’t quite put their finger on and allows him to do what he does as a mortal.

What are your thoughts on how CW is handling the “Where is Batman?” question? Personally, while it seems like the obvious choice, it sounds like the right choice. It also allows a way for them to introduce him further down the line if they so choose.

Tags:arrowarrow versebatmanChris FotielseworldsGrant Gustinruby rosestephen amellsupergirlthe cwThe Flash
Source:collider.com
share on: FacebookTwitter Tumblr
previous article
Will “The Final Joke” Deliver The Loss Of Another Robin In ‘Batman Beyond’?
next article
Top 25 Pre-orders Shows ‘The Batman Who Laughs’ On Top