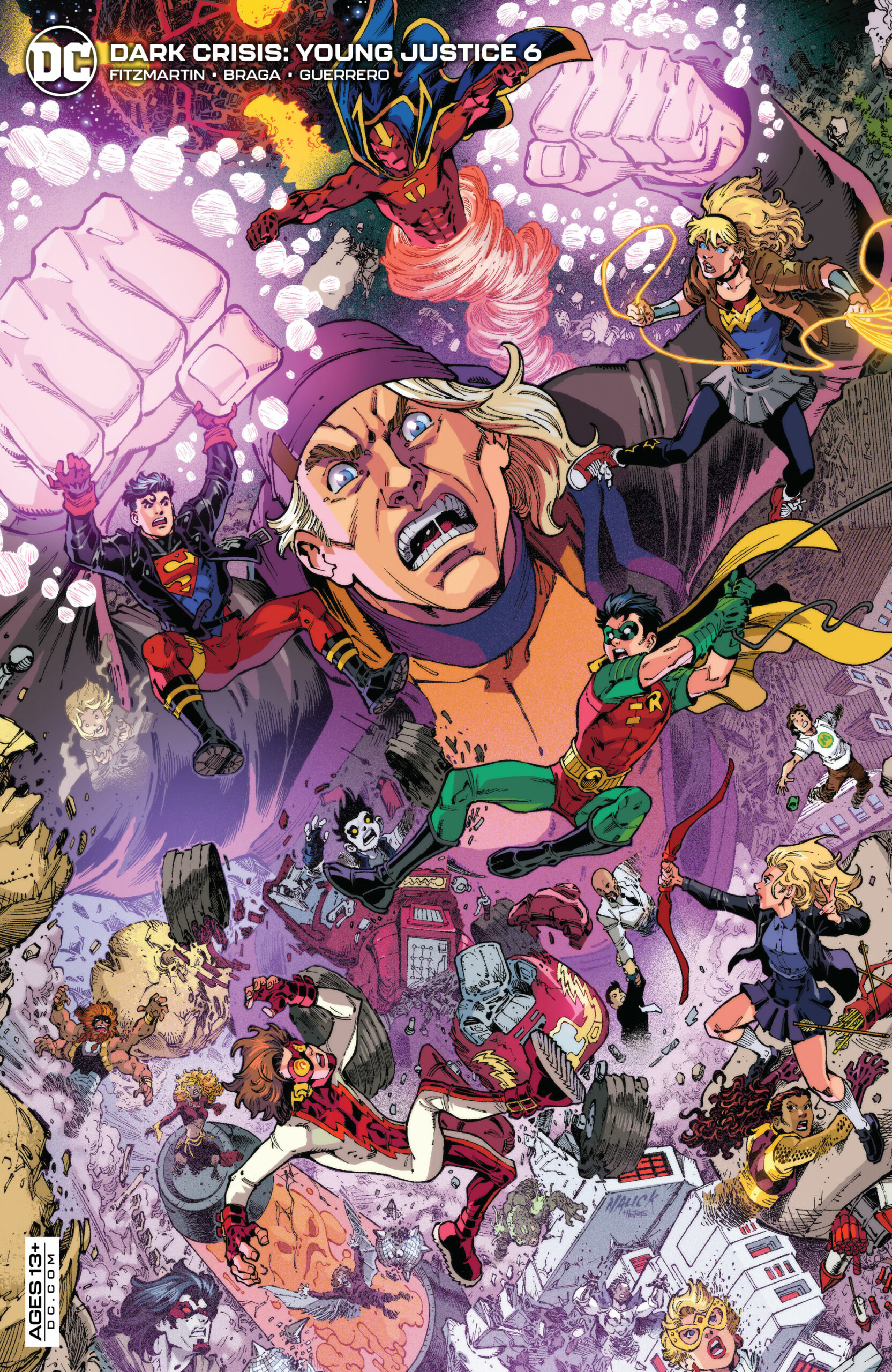 After escaping Mickey Mxyzptlk’s counterfeit reality, Young Justice returned to Earth-0. However, they weren’t out of the woods yet, as the 5th-dimensional imp followed his favorite teenage team home. The majority of the issue focuses on the conflict between Mxyzptlk and Young Justice, as Impulse and Wonder Girl devise a plan to defeat their enemy. 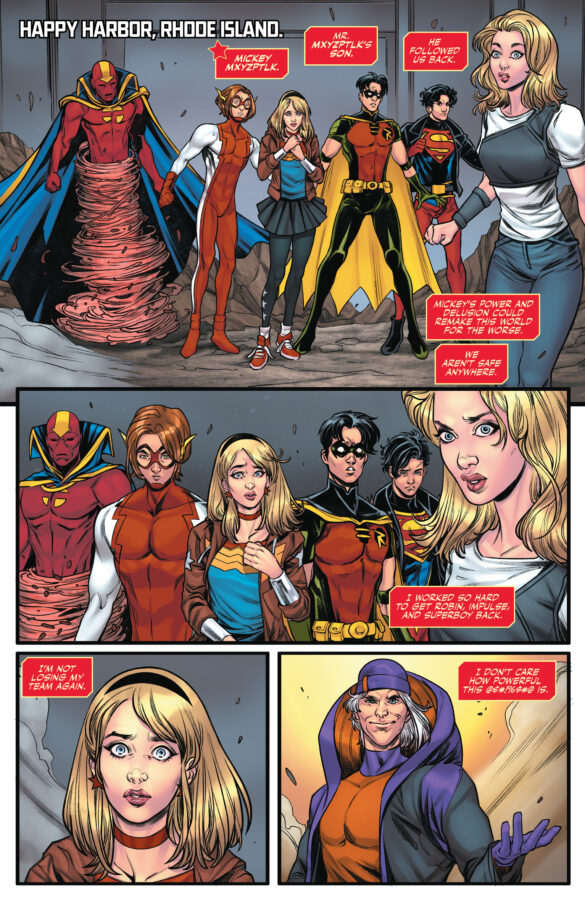 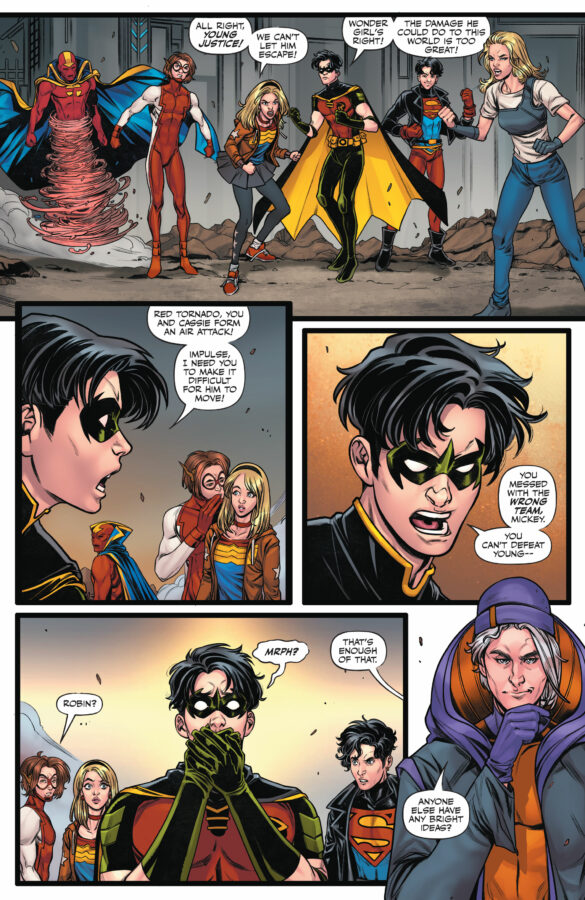 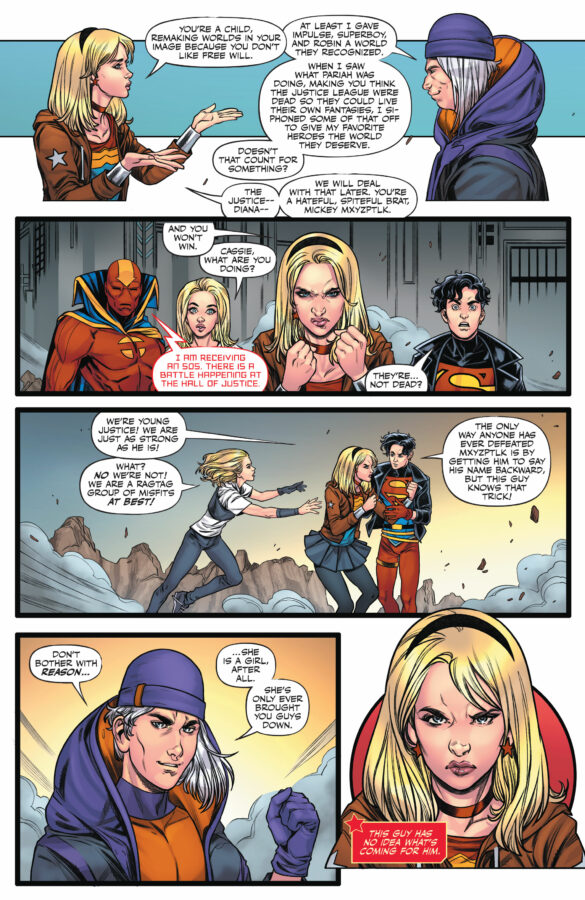 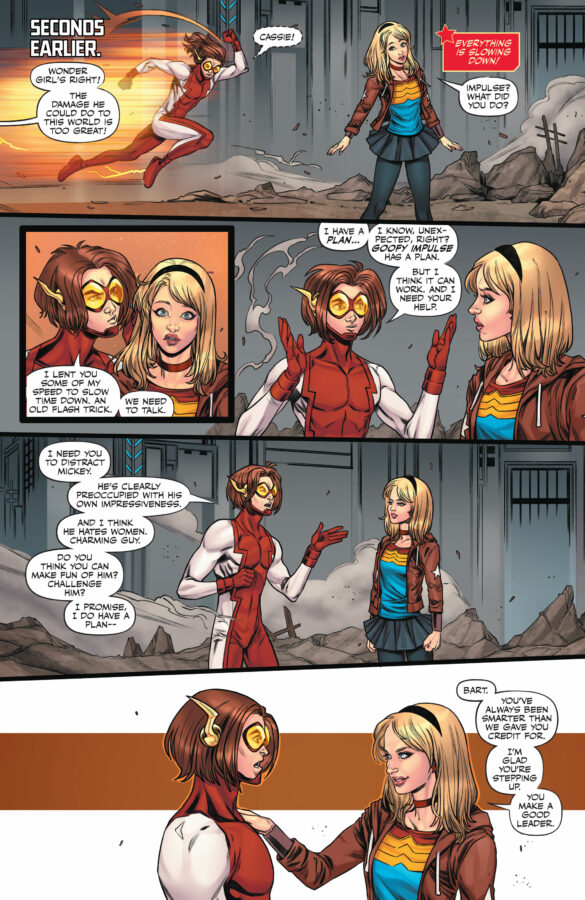 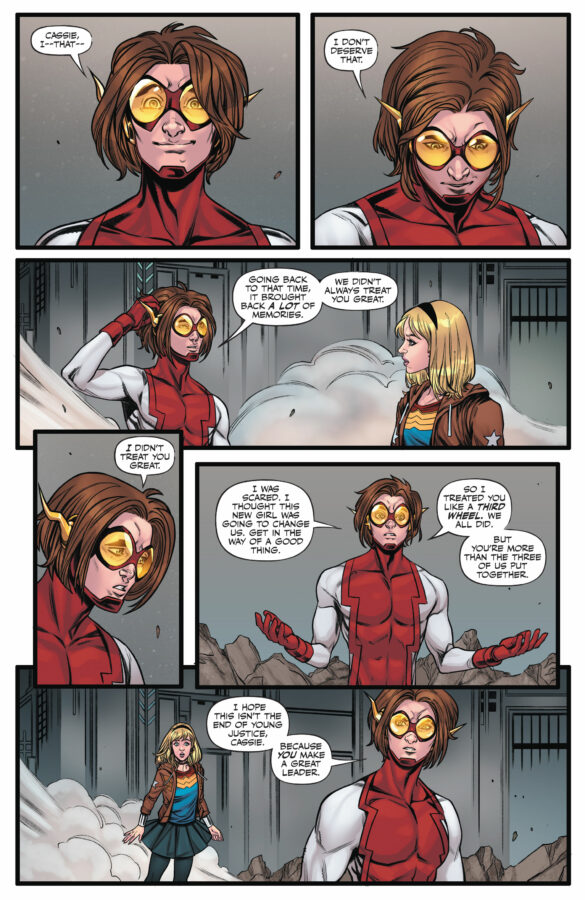 Dark Crisis: Young Justice #6 is a bit of a mixed bag story wise. This miniseries’ strength has been Meghan Fitzmartin’s commitment to the resonant themes of toxic fandom, nostalgia, and masculinity. This trend continues in issue six, as Fitzmartin explores these teenage heroes’ baggage in depth.

Much of what’s referenced dates back to the mid-2000s leading up to 2011’s The New 52 reboot, which rewrote/erased a large chunk of these heroes’ stories. Therefore, as a fan of this generation of characters, it was nice to see Fitzmartin reestablish this history. However, she didn’t simply bring it back; she also developed and matured these heroes, bringing them in line with the contemporary morals and ethos of post #metoo Millennials. By the end of the story, they no longer feel like juvenile teenagers but rather fully formed young adults.

As for the plot, I wasn’t completely sold on how she resolved the Mickey Mxyzptlk conflict, as it all seemed a little too convenient. While it wasn’t completely unearned, the interactions between Bart and Cassie felt a bit ham-handed. It’s apparent that Fitzmartin has a soft spot for each of these heroes, which is understandable. Bart was always the immature clown of the team, and Cassie was the token girl. Accordingly, Fitzmartin does her best to flesh out these two, but their interactions in this issue come across as overly sentimental. Overall, I felt that the writer spent so much time exploring her themes that the plot of this issue suffered.

After finishing this issue for a second time, it dawned on me that Laura Braga’s art feels reminiscent of Howard Porter’s, which is pretty spot-on for what this series was trying to accomplish. Porter’s work on JLA in the 90s remains iconic, and Braga has been doing her damnedest to channel the 1990s in this series. 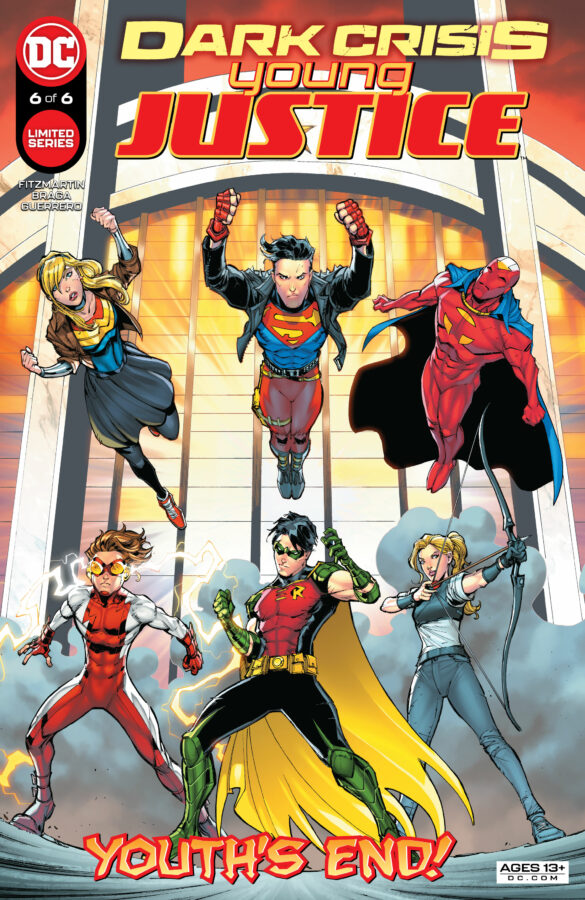 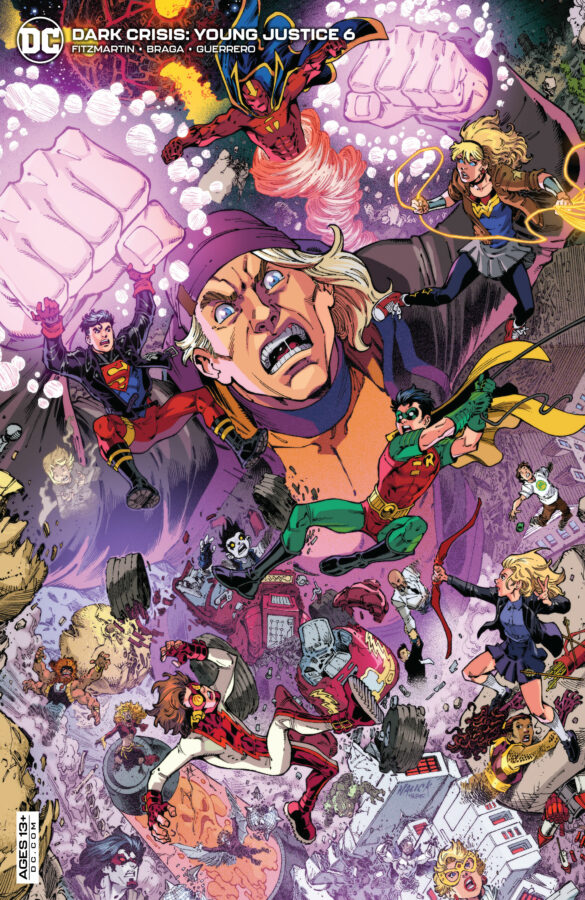 That being said, for some reason her art feels a little wooden and posed in this issue, especially Wonder Girl. She often has her head cocked in a strange manner, or her arms out in a weird “power pose” that doesn’t look natural at all.  When looking at a few of these panels, I found myself thinking “there’s no way a person would ever position their body like this.”  I found the shift in Braga’s art surprising considering how much I have enjoyed her work in previous issues. Overall, the art in this final chapter didn’t feel quite as polished as in previous issues.

All in all, Dark Crisis: Young Justice #6 wasn’t the exact finale I wanted for this series. Even though Fitzmartin’s handling of the cast was excellent, this story ended with more of a whimper rather than an inspiring bang. While Braga’s art successfully captured the spirit of comics from the 1990s, it was also distracting and strange in places.

Nevertheless, overall, this series has been a fantastic love letter to the Young Justice generation. Fans of these characters will enjoy revisiting a simpler time but also find themselves challenged by Fitzmartin’s critique of yesteryear.

Final Verdict: The issue stumbles, but the series doesn’t fall.