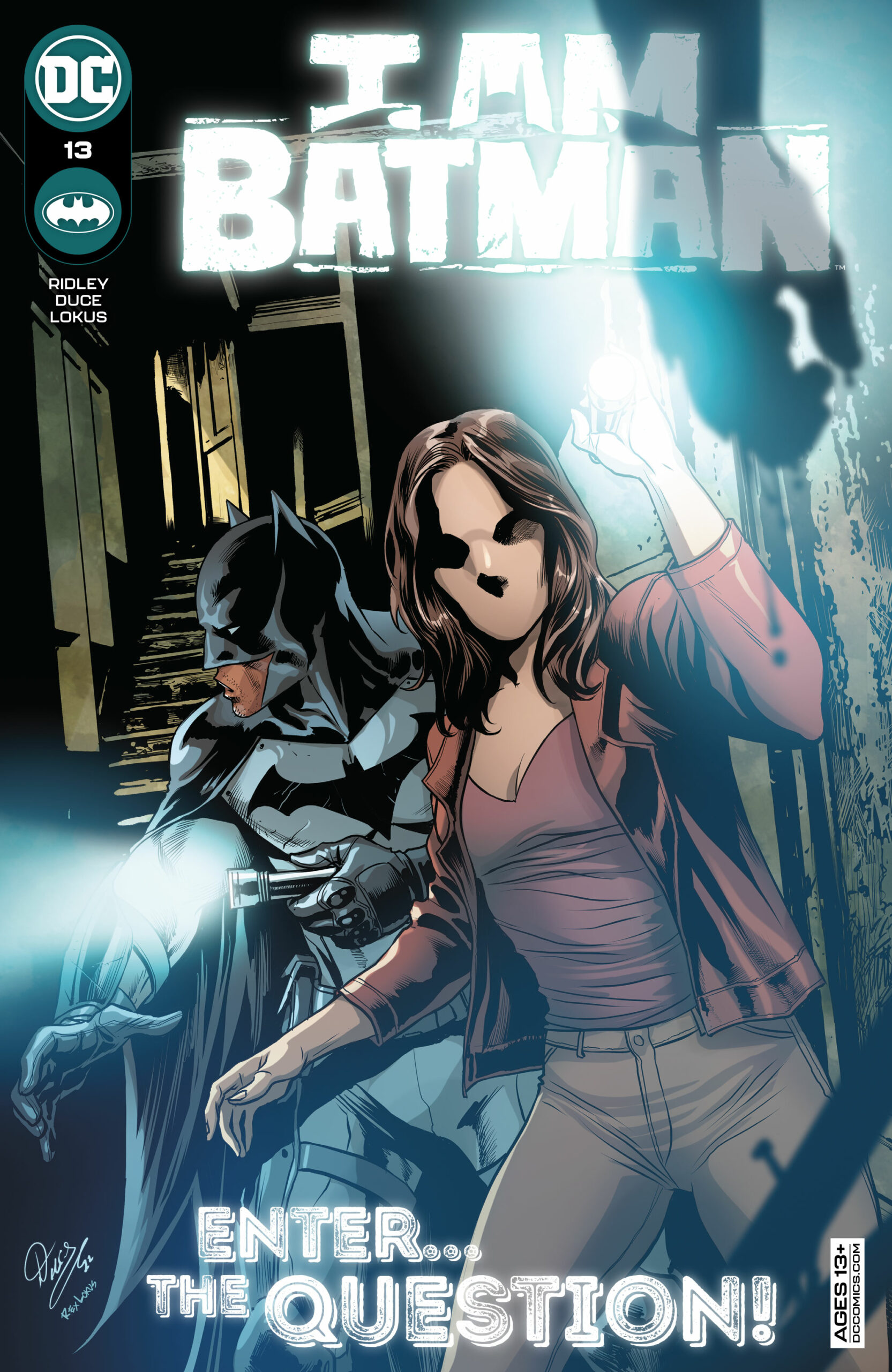 In I Am Batman #13, Batman and the Question’s investigation into Anarky’s murder puts them directly in the crosshairs of a rogue police unit set up to deal with the “radical” activist, which is willing to kill to keep their secrets. At the same time, as she watches a friend being lured back into a life of crime, sitting on the sidelines is no longer an option for Tiffany Fox.

This issue continues Jace’s team-up with The Question, AKA Renee Montoya. While I prefer Vic Sage under the featureless mask, I’m still quite pleased to see Renee make an appearance here in her heroic identity. She’s being used to great effect in the Gotham books as the new police commissioner, but that job prevents her from acting as the Question. So, it’s great to see her get a break from her duties in Gotham City. 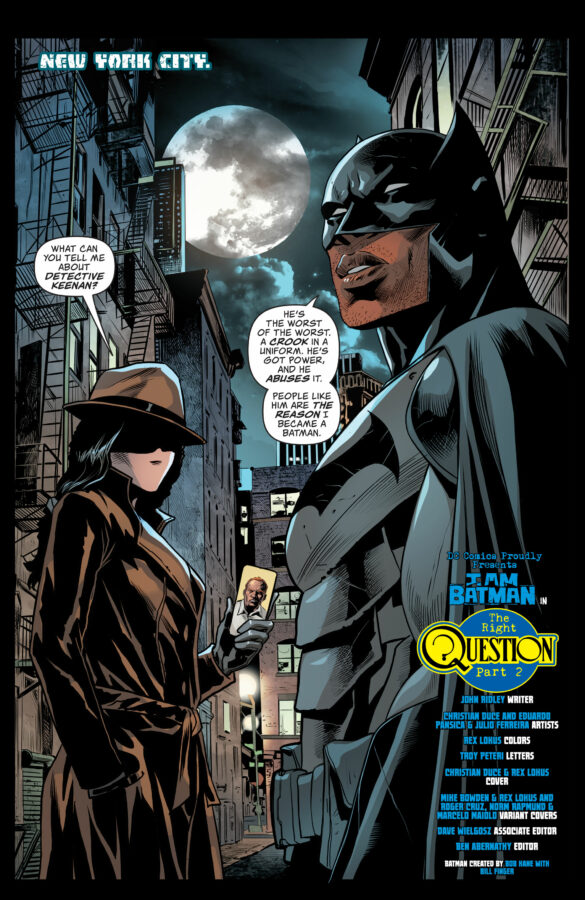 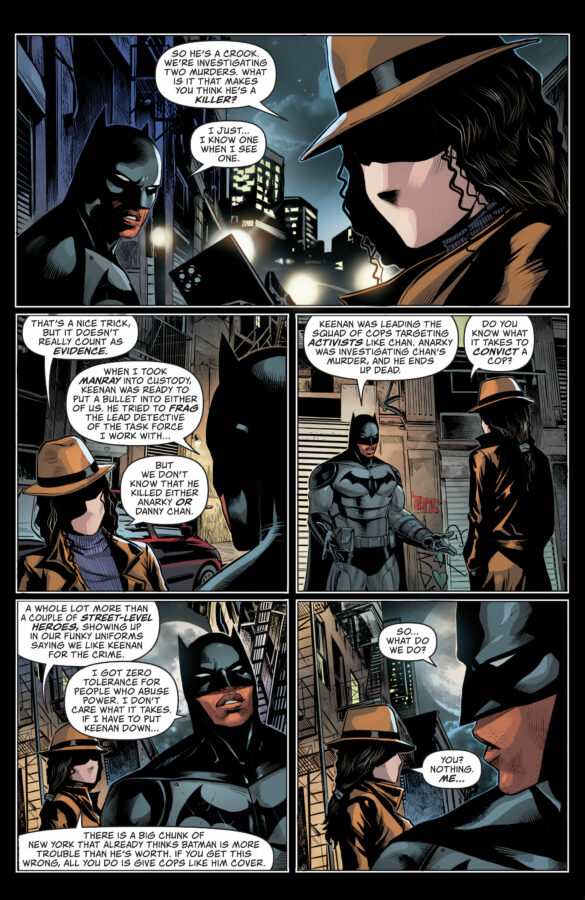 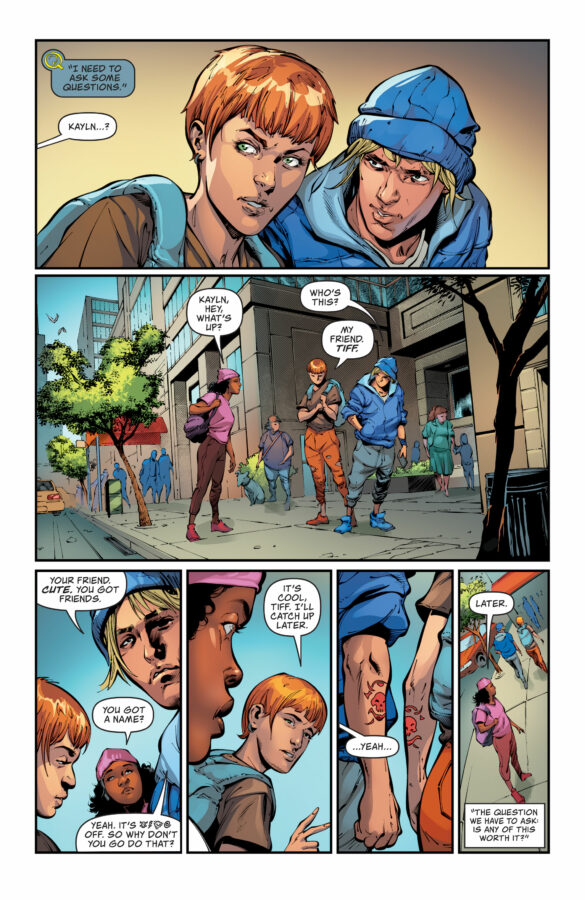 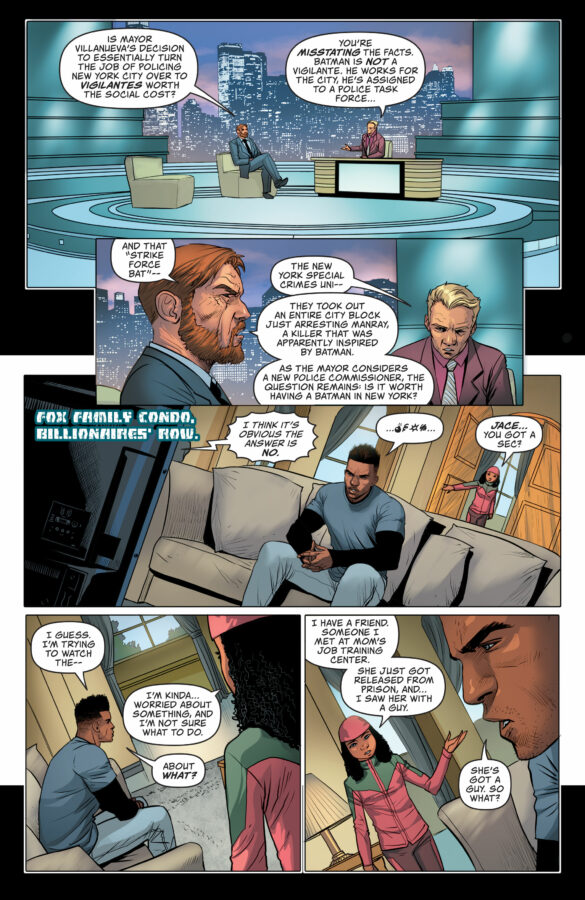 It still seems up in the air whether or not Renee will be staying in New York and she’s expressed reasons why it might be best for her to stay. However, the Gotham books are not giving any indication that she’s going anywhere, so I’m guessing that she’ll be headed back to Gotham once this storyline wraps up. It would be great to see her and Jace keep in touch, though, so future guest appearances will always be welcome.

It may be more fitting for Renee to show up in this story, as opposed to Vic. Renee’s very much like Jace, in that she’s sharing her heroic identity with another hero, one who’s arguably the definitive version. So, she’s in a good position to give Jace some advice on stepping out of Bruce Wayne’s shadow.

I also love how Ridley’s emphasizing her ability to deal with enemies without resorting to violence. She’s quite capable of handling herself in a fight, but it’s refreshing to see a hero that actually tries, and often succeeds, in talking her opponents into reconsidering their position, disarming the fight before it happens.

There’s also a tantalizing, but very brief moment that foreshadows more difficulties in Jace’s future. We see a hooded figure, apparently stalking him. As Jace unknowingly drives past on his motorcycle, this person says, “You will pay”. Clearly, this person has a grudge against the new Batman, but is his grudge against Jace or Batman? If it’s the latter, that would imply he knows Jace’s double identity. Either way, he’s likely going to be causing the New York Knight a lot of trouble.

We also see some more advancement in the Tiffany Fox subplot. In the last issue, Tam made a new friend but this month she finds her new friend has fallen under the questionable influence of a new boyfriend. Tiff’s especially worried when she notices that they have matching gang tattoos. She finds herself frustrated with her lack of options for helping her friend and finds that her siblings aren’t any help either.

The issue ends with Tiff setting out into the night, wearing a mask and in her own costume. She hasn’t given herself a codename yet but her red and green uniform does appear rather Robin-esque. I’m guessing that it won’t take long for her to have a run-in with her brother Jace, but I get the feeling that he’s not going to be too pleased. The final splash page that reveals Tiff in her full costume bears the text “Next: Unwanted Allies”, which may be foreshadowing Jace’s reaction. 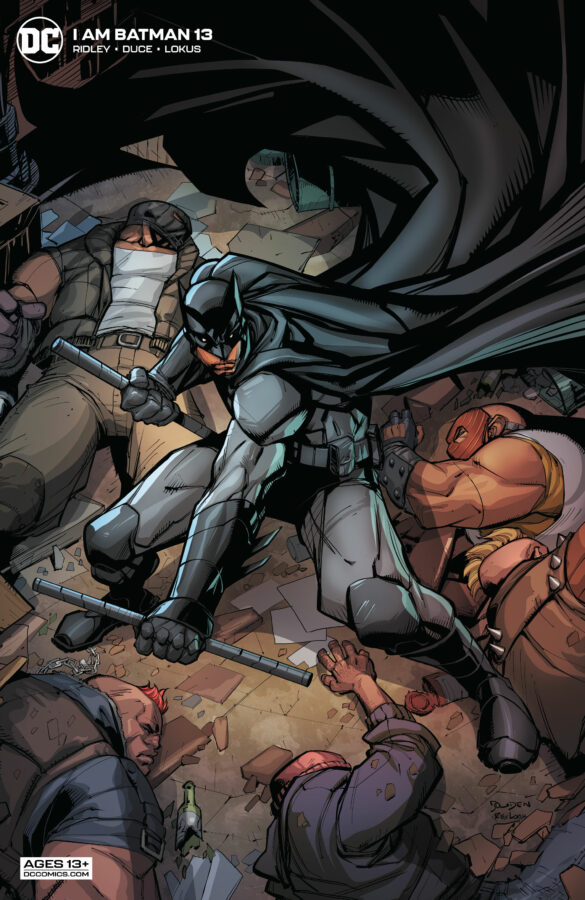 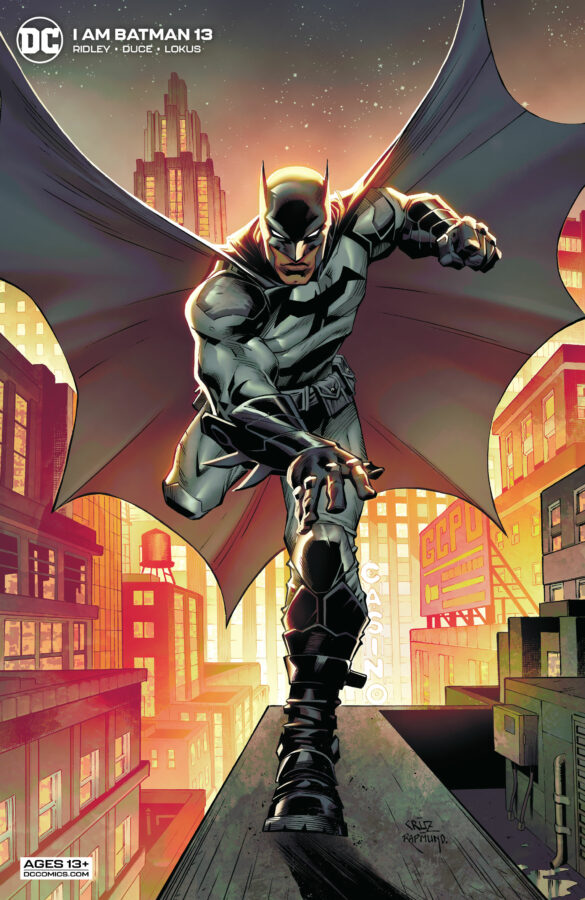 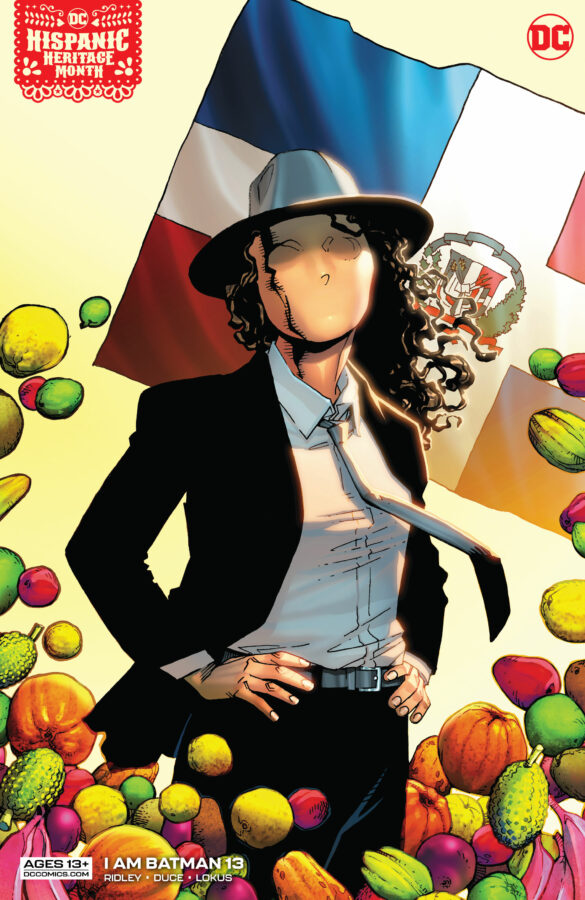 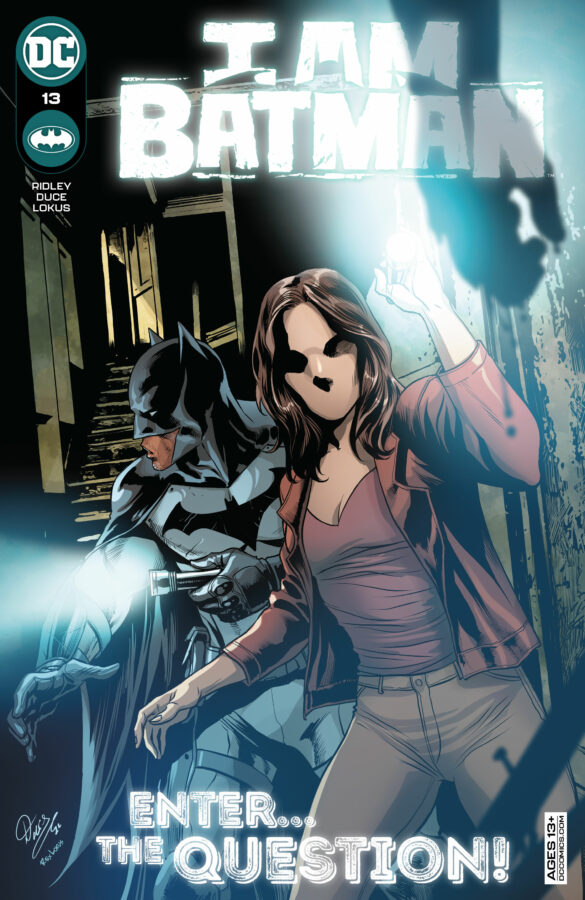 There really isn’t much to complain about in this issue. Ridley’s doing a bang-up job, and the artwork consistently makes Jace look as iconic a Batman as Bruce does, in the main Bat titles.

I know that many are still unsure of Jace’s worthiness to share the mantle of Batman. I was doubtful myself at first, but as Ridley’s story develops, Jace is really growing into the role. I Am Batman #13 contains a major landmark in the story, as Tiff takes her first steps towards establishing her own crimefighting identity. It will be interesting to see if Jace will put a quick end to it, or accept her as his “Robin”.

After Dark Crisis Comes The Dawn of the DCU