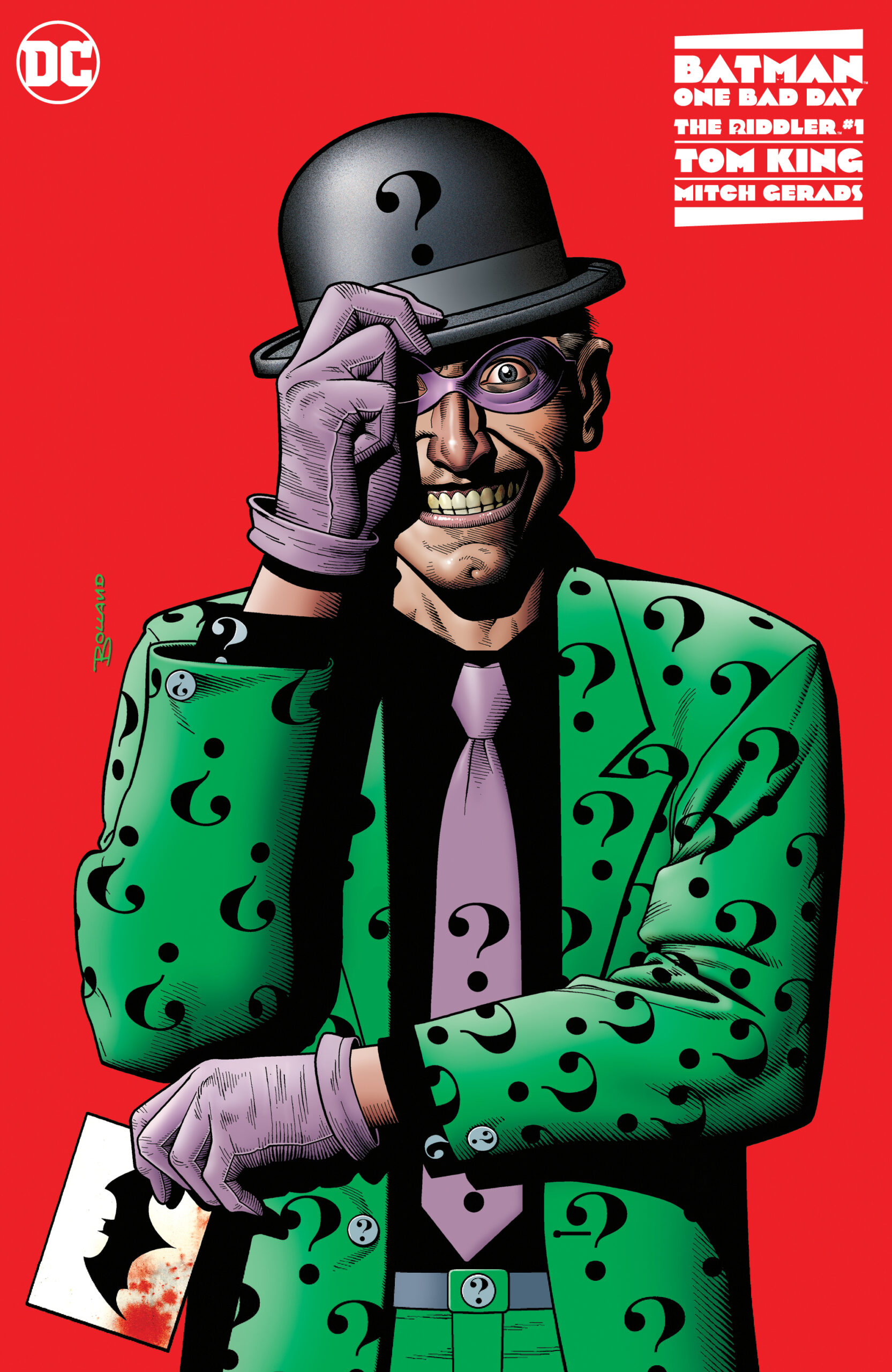 In 1988 Alan More terrified us all with the idea we’re all just One Bad Day away from going insane, being our worst selves, and from our lives being forever changed, in the classic Joker story, Batman: The Killing Joke. Any story following that now would really have a lot to live up to. Batman: One Bad Day: The Riddler SUCCEEDS!

When this story was first announced. Fans were excited. When it was revealed that it would be written by Tom King even moreso. When King said he was going to write the most terrifying Riddler story ever and be one that would haunt people and that it was a tale he’d been wanting to write for years… I pretty much fainted. 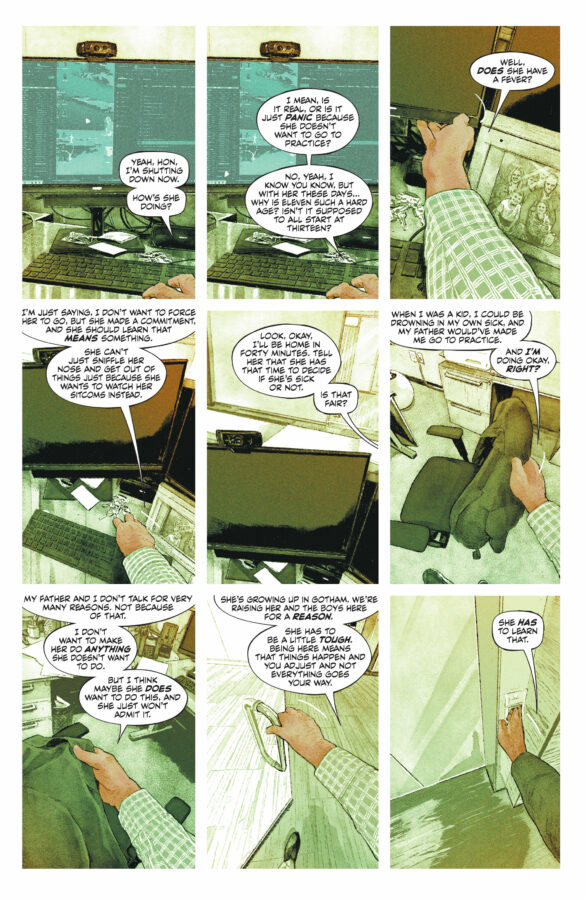 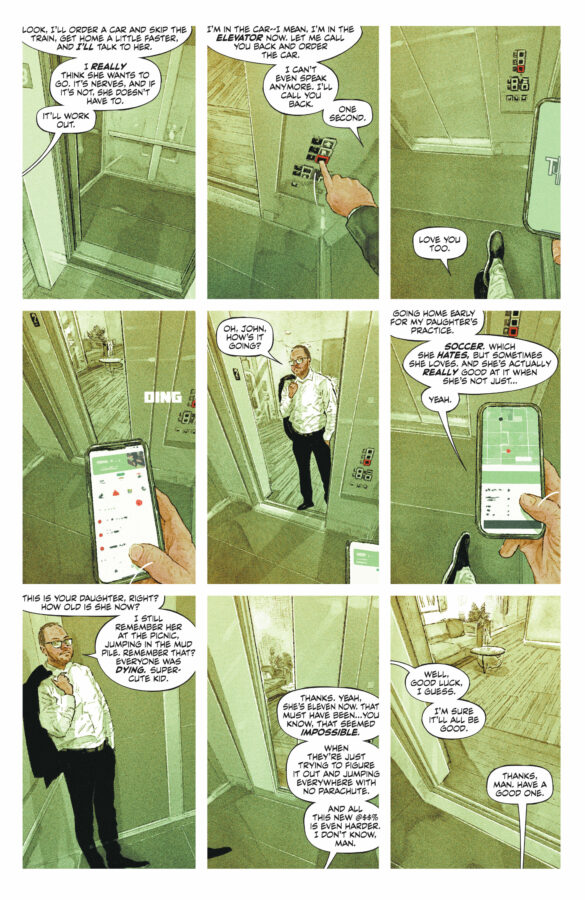 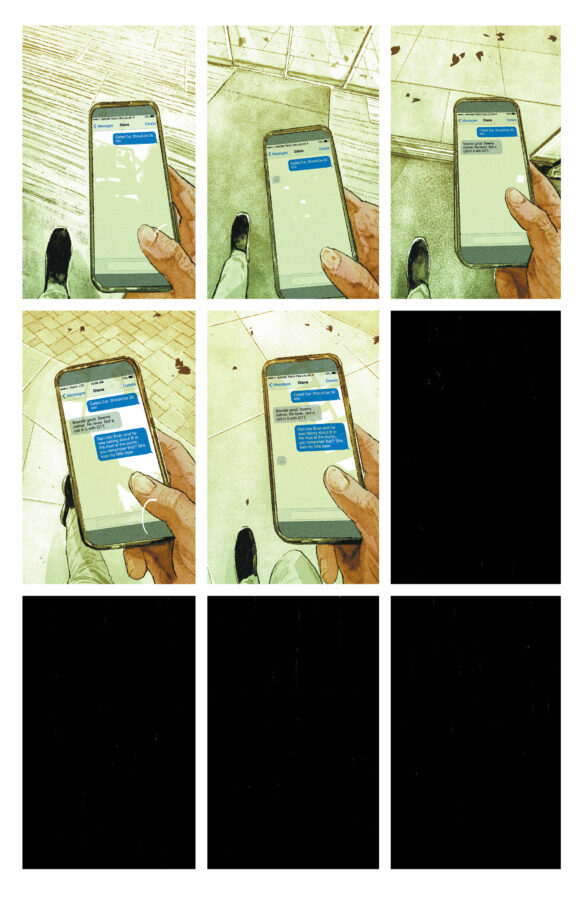 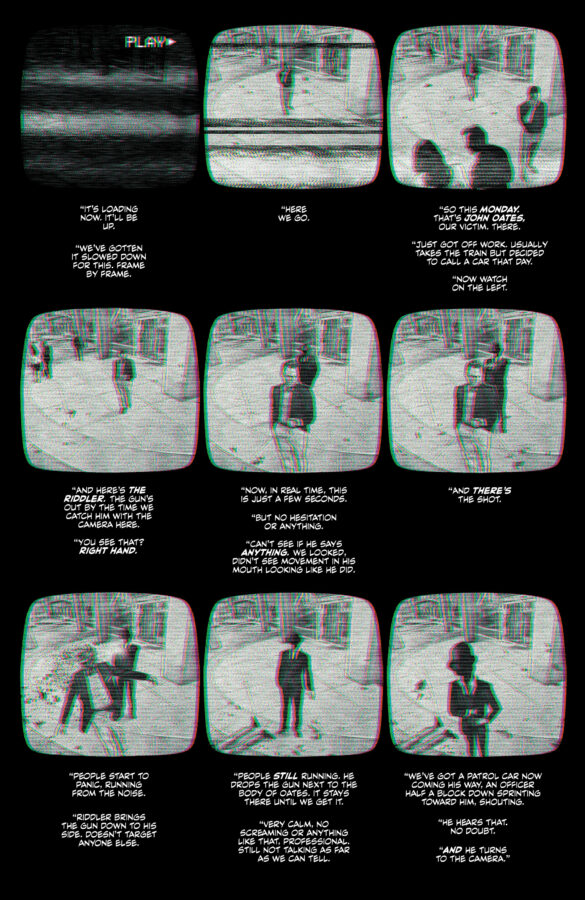 The Killing Joke was the definitive Joker story that terrified readers. It changed The Bat family forever and gave the Joker an origin that would inspire both movies and tv, and was accepted by all as one of the greatest comic books ever written. Long story short; big shoes to fill. So I was going into this comic hoping for the best, but not expecting it to reach that level of greatness. It does. This is the greatest Riddler story I’ve ever read. This will be used for years to come as the definitive “Like Riddler? Read this” Bloody hell! Tom King take a bow!

Our tale starts with an average person, living their average life, and then all of a sudden everything changes. This is a terrifying story that really shows us the truth behind The Riddler. Where he comes from, how he became the way he is.

Tom King’s penchant for the mystery genre and the slow-burn-reveal usually take a few issues to get to reach the payoff but used in a standalone issue like this, they’re just the toast of comic book writing. I love King’s work on Batman. What he did for Bruce and Selina, Bane, everything. This will be a big part of what he’s remembered for. If I ever get to meet the Talented Mr. King, this would be what I’d get him to sign. 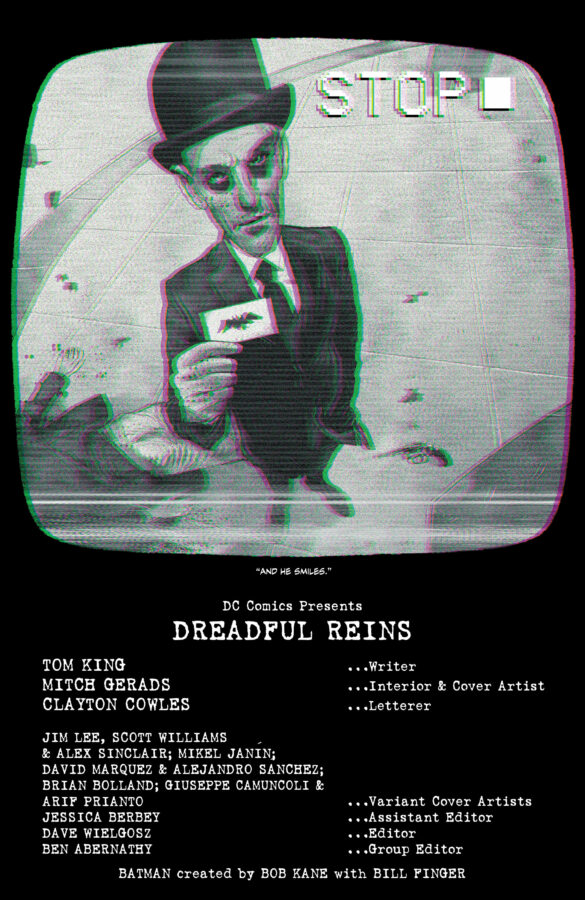 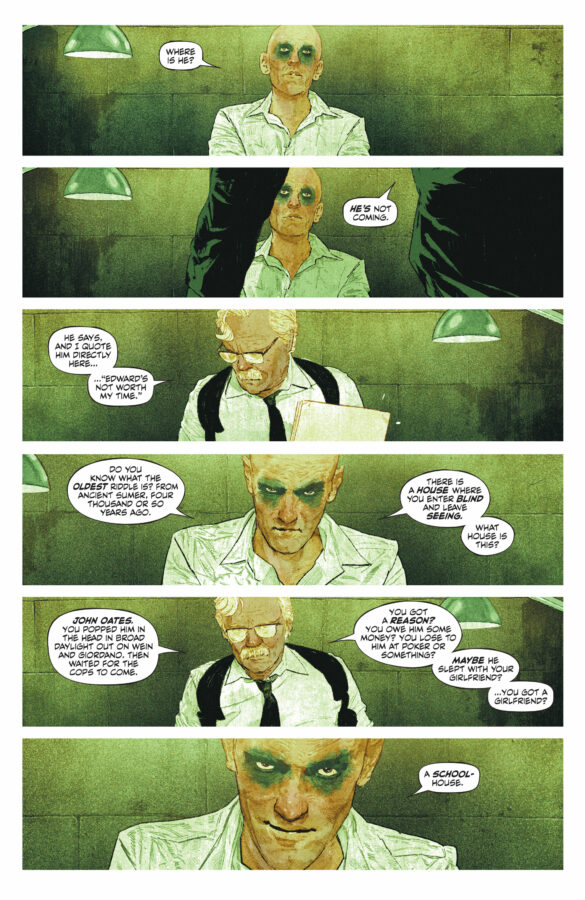 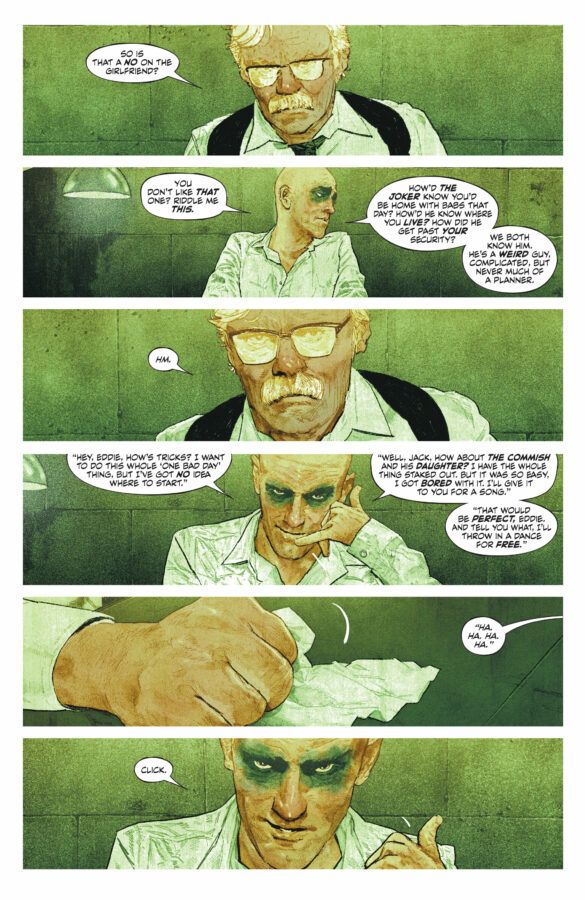 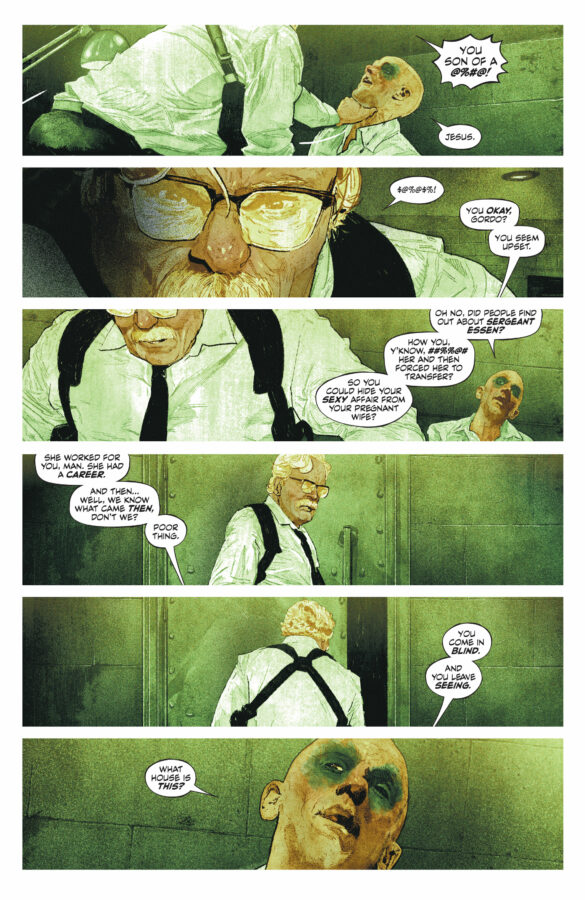 Before this book, Mitch Gerads’ work, for me, was always just another art style. I saw it, it was good, I moved on. When I saw it I would probably think of Mister Miracle and that was that. After this issue, I will always think of Riddler, and how he draws him so well, how he sets the scenes, and how he has Batman as a silhouette in most of the pages he appears in. Because, after all, we’re not reading this for Bruce, we’re reading this comic for Edward. Mr. Gerads, you understood the assignment, absolutely perfect art! What’s terrifying is that Edward wears a bowler hat and still looks awesome in this issue! Riddle me this art.

Without giving away any spoilers it’s a little tough to explain just how good this book is. I was on the edge of my seat throughout. This is a Riddler that would plague a city. This is a man who’s so smart he knows everything about you before you even know what’s going on. He taunts Batman, a man who’s 6″4, built like a tank, and punches giant monsters on a daily basis.

The story gives Edward Nygma the respect and the fear that we haven’t felt for him in a long time. I did stop after reading and think was this book in any way affected by Paul Dano’s performance in The Batman (2022) but then I stopped and thought that, even if it wasn’t, it worked. 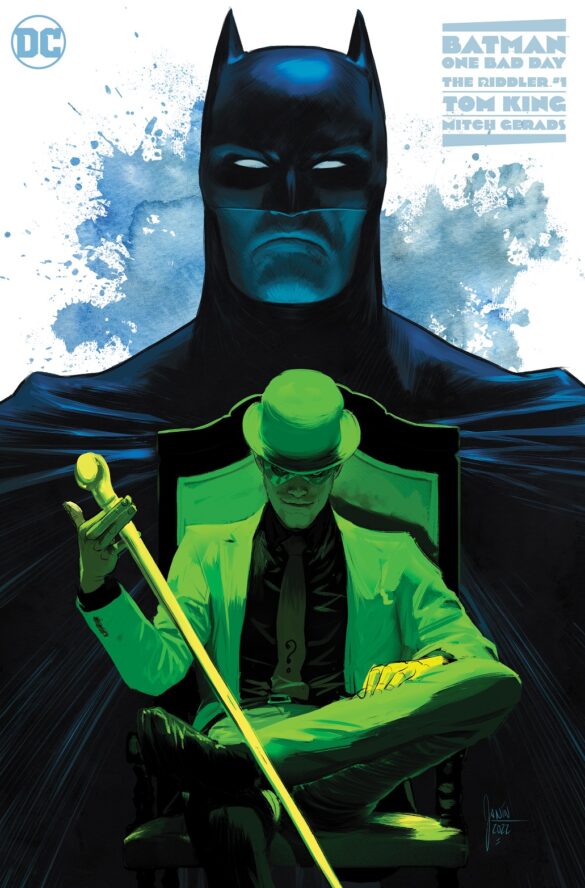 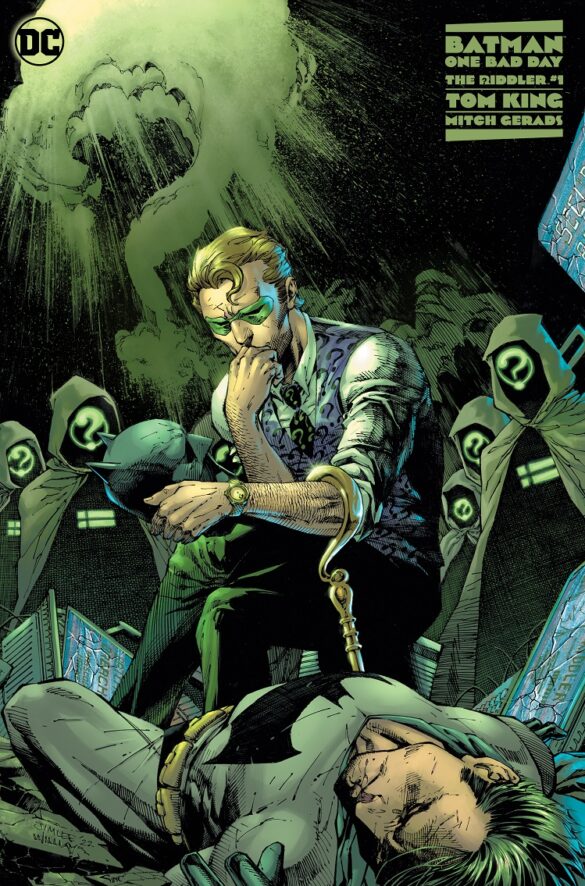 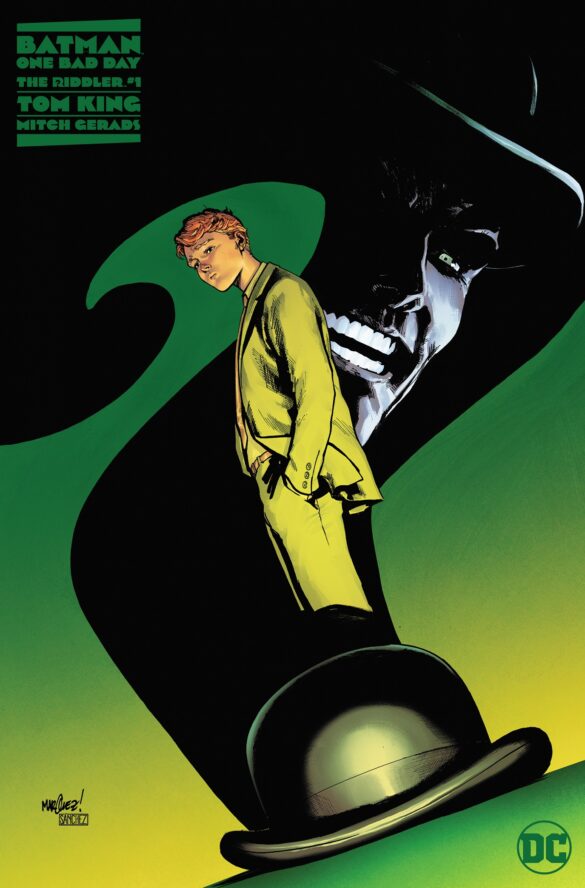 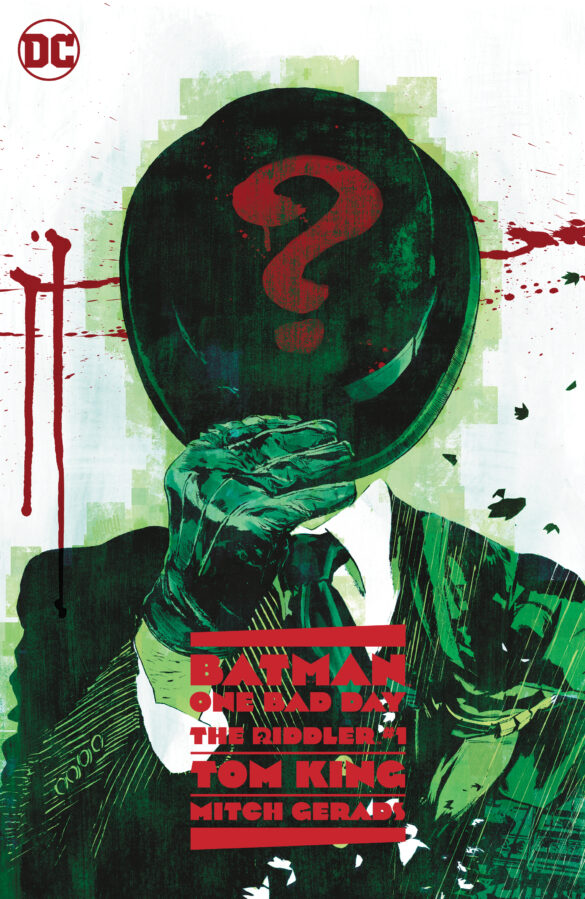 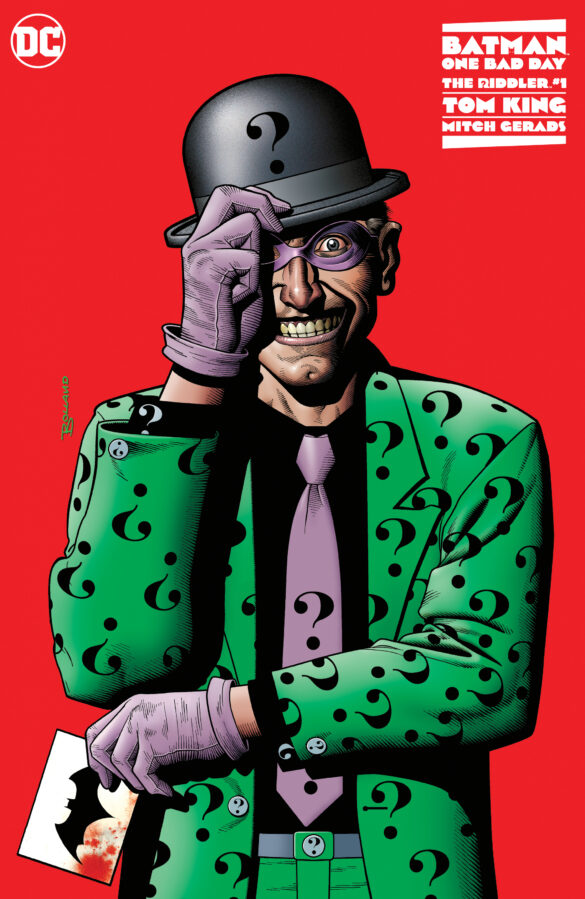 Riddler is one of my favorite Batman villains, the thorn in Batman’s side. He’s the one who’s always testing the Dark Knight. Over the years he has had highs and lows. He’s been behind city threatening blackouts, to being a pushover that no one cares about. This book puts him back on the map in a great way.

In my favorite comics story ever, Batman: Hush, we have a Riddler who’s a real threat to Batman and almost succeeds in his plan to bring down the Dark Knight. That tale, and now this one, delivered my favorite iterations of the Riddler.

Batman: One Bad Day: The Riddler lives up exactly to what it needed to be. I loved it! This is the Killing Joke for the character. Read this book Batfans! You won’t be disappointed!