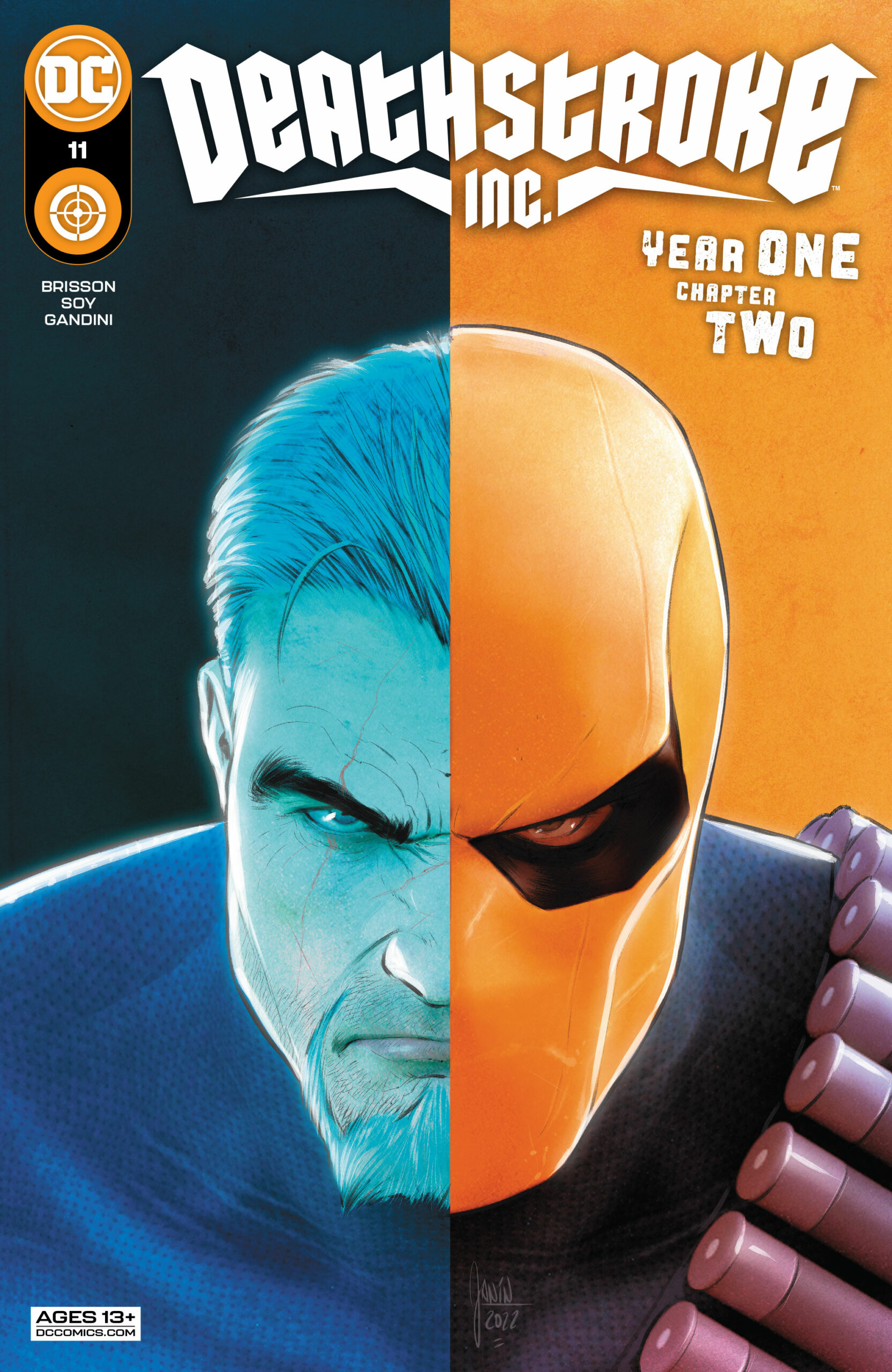 Chapter two is here! In the last issue of Deathstroke Inc., a new arc began, exploring the beginnings of the character and what led Slade Wilson to become a merciless killer. Deathstroke Inc. #11 picks up where the last issue left off, with Slade going on his first mission as a true assassin. There’s quite a bit to this story, so let’s get to it.

Don’t read on if you don’t want spoilers!

Take It Up a Notch

Part of what makes this story compelling is witnessing Slade discuss how he feels like so much of his humanity is gone. His son, Grant doesn’t want his father to go and his wife, Adeline, has more going on as she tries to hold her family together, but Slade has little feeling or compassion for what he is putting his family through. Whatever he went through in the military and the later experiments, his capacity for love is virtually gone. 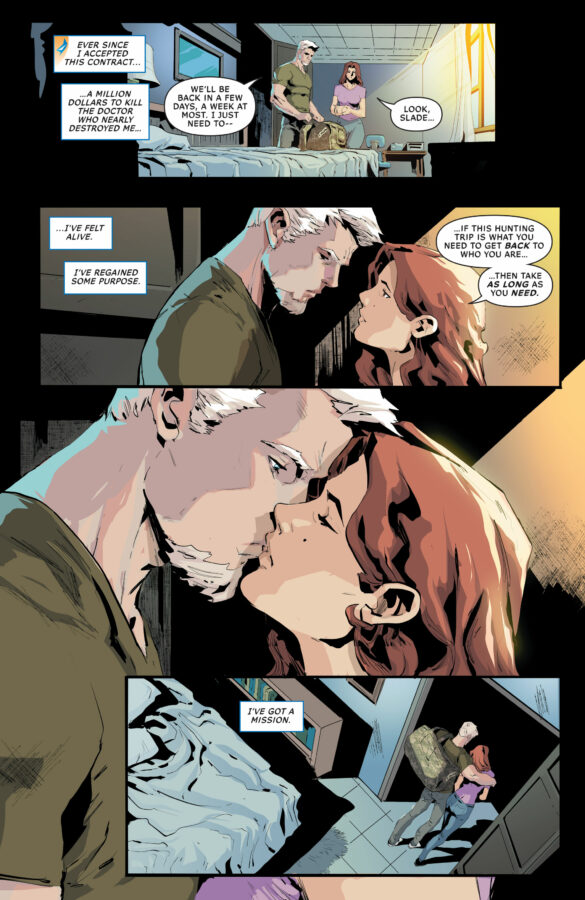 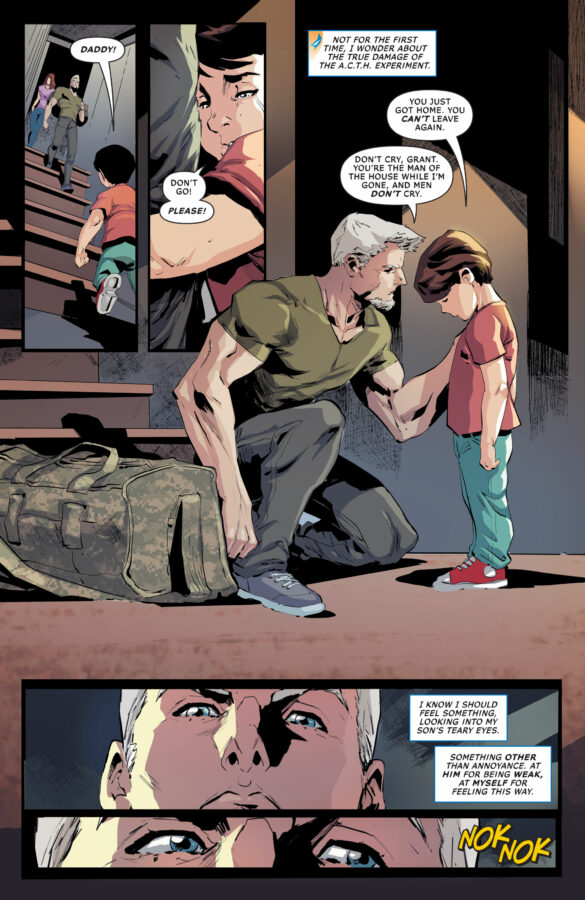 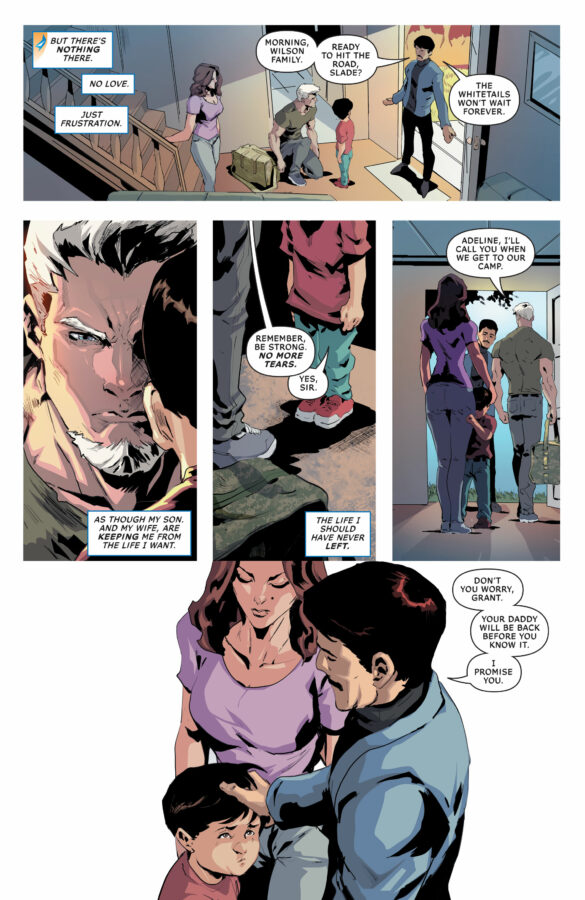 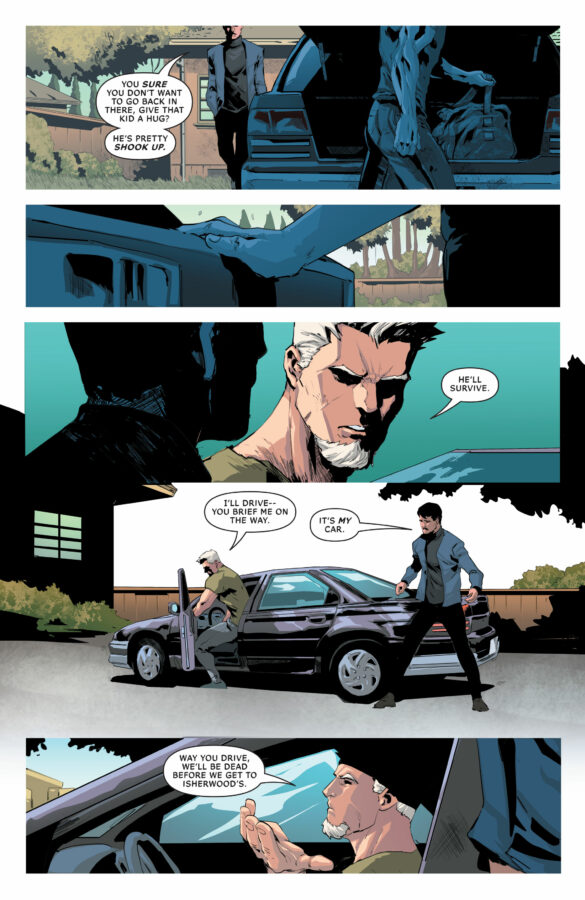 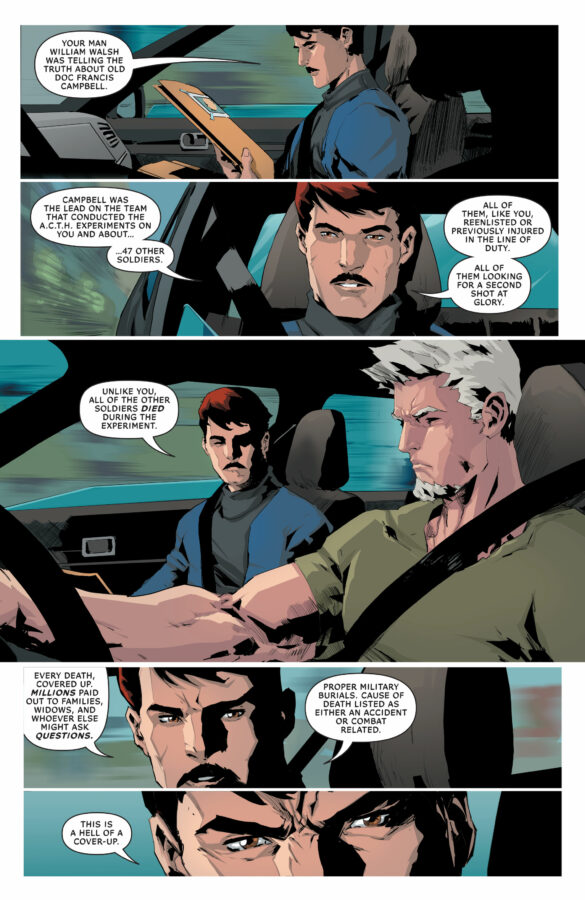 Slade mourns this slightly, but doesn’t have time to focus on his family or his mind. He and his aide, Wintergreen, arrive at their destination to grab some new tech as they formulate their assassination plan. This scene is pivotal for many reasons, most of all because Slade puts on what would become the Deathstroke costume for the first time. Slade complains about the orange and black, but these colors become synonymous with him as an assassin and it’s pretty neat to see him wearing them for the first time.

The time period this story takes place in is still relatively unclear other than the fact that it’s in Slade’s past (duh, it’s an origin story). With that being said, the art style for Deathstroke Inc. #11 continues in the same vein as the previous chapter. It feels like an older generation of comics, which, again, is a really great artistic decision for the creative team to make. It makes the story feel more cemented in its present and allows readers who might not have read older comics to feel like they’re in a time machine.

Getting to watch Slade Wilson start out as he’s uncovering his powers and beginning to develop the Deathstroke persona is also a great feature of exploring the comic’s past. Obviously Slade’s origin story has been told before, but new perspectives are always interesting. We also get to see proof of Slade’s skills without any special technology that might exist in his future. Especially of note is seeing what other figures in Slade’s life experience are dealing with and how they are having to adapt to the changes Slade is creating in the world. Speaking of… 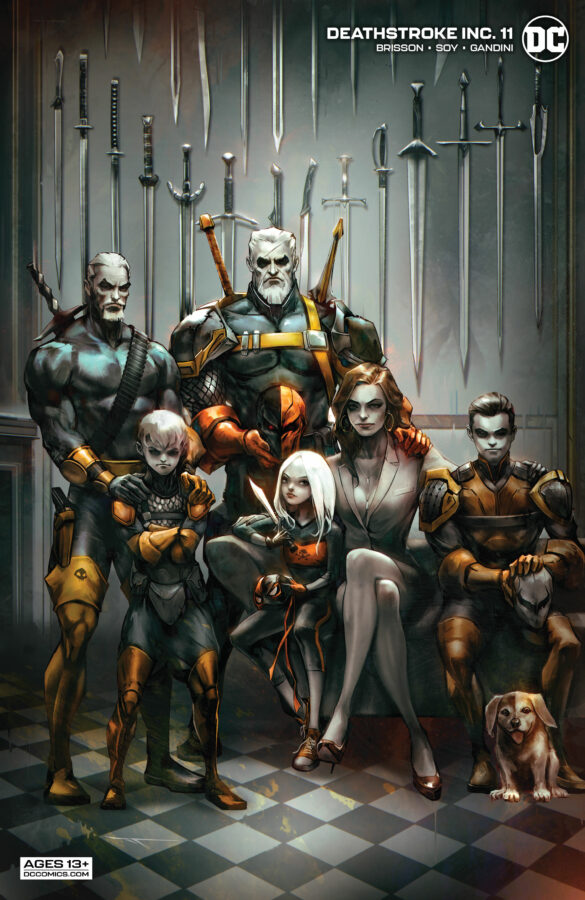 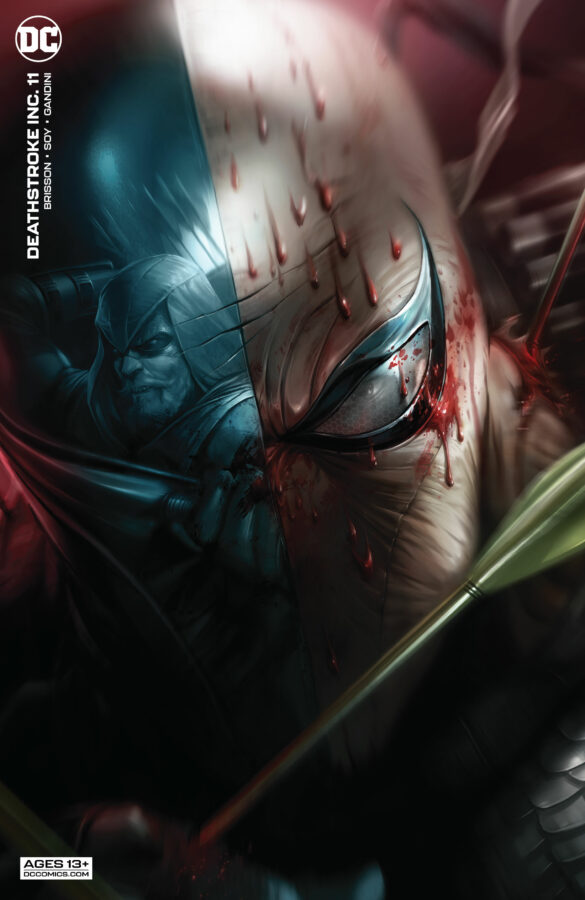 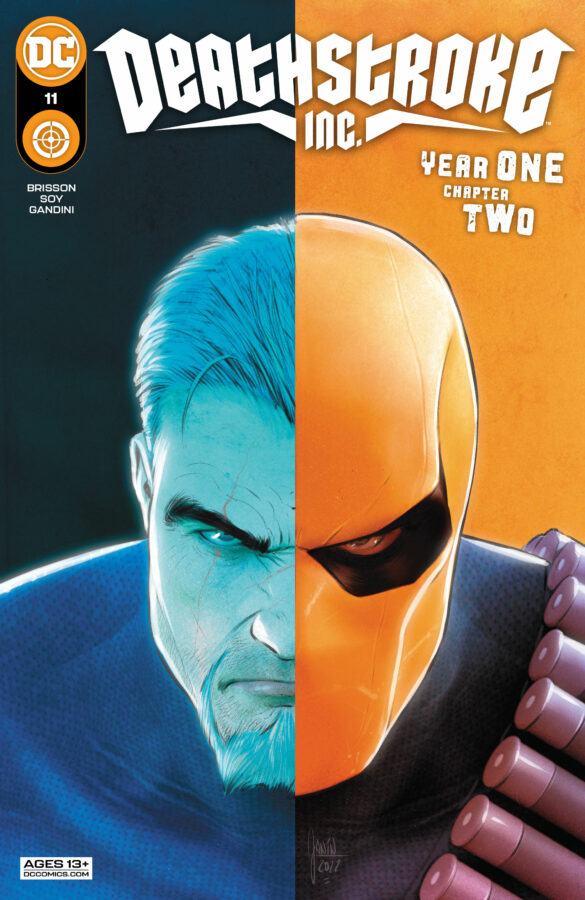 One of the biggest figures in Deathstroke’s story undeniably is Green Arrow and he’s finally here! I am beyond excited that the Green Arrow has arrived in Deathstroke Inc. We don’t want to talk too many details about why Oliver Queen has appeared in Slade Wilson’s life. However, if the scene in this issue is meant to be this comic universe’s first interaction between the two, it’s going to be a bumpy ride!

Deathstroke Inc. is really starting to find its niche. Previous issues had a continuing arc and storyline, but it got a little confused and distracted as time went on. The “Year One” plot has thus far been excellent, engaging, and stylistically interesting. Further arc details being introduced are going to make Slade’s life more complicated, but I personally welcome the drama we’ll get to see playing out on the page. I’m also looking forward to watching Slade’s morality continue to evolve and become the Deathstroke that we know in the current time of the comic.

Are there any details we missed? What do you hope to see happen between Green Arrow and Deathstroke? Drop a comment below with theories and ideas!