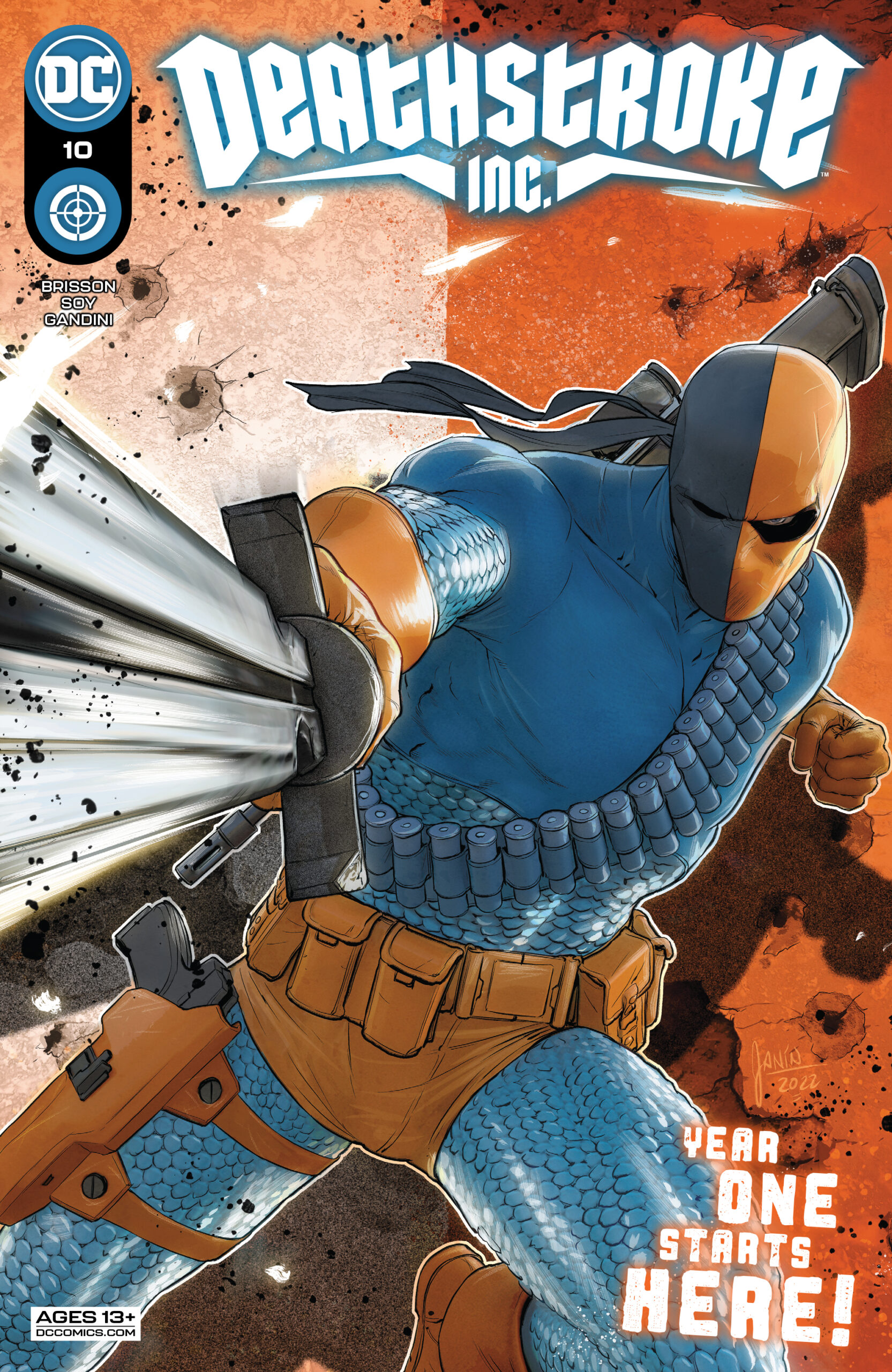 Ready for a new arc? In the last issue, we were still in the midst of the “Shadow War” crossover with Robin and Batman. Now, the series is looking to explore Slade’s origin story and how he became a legendary assassin. Deathstroke Inc. #10 brings new secrets from Slade’s life to light and there’s a lot to explore.

Be warned, there are spoilers ahead!

When last we saw Deathstroke, he was looking pretty iffy. He’d just emerged from the Lazarus pit and had essentially declared war on the world, stating it was time to kill everyone. That’s not where our story resumes, however, as this issue takes place entirely in a flashback. 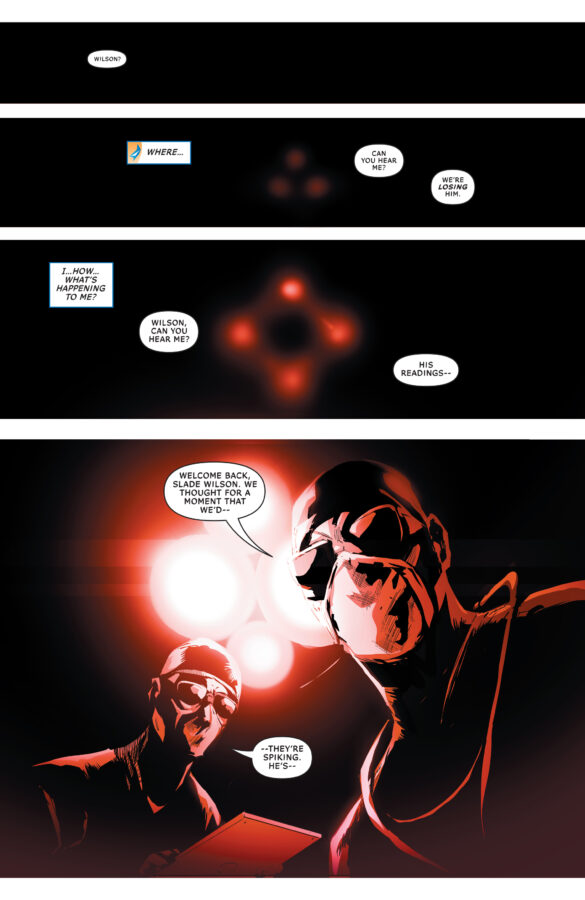 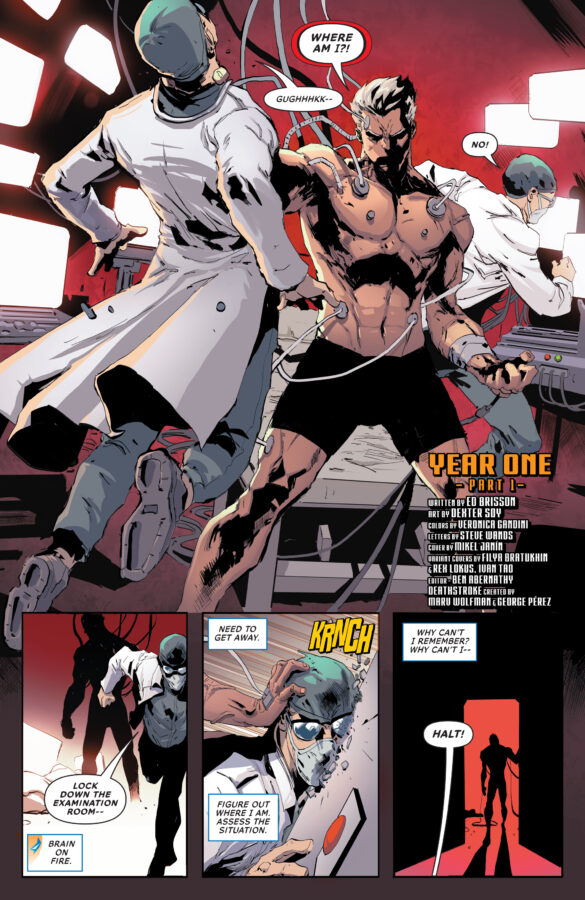 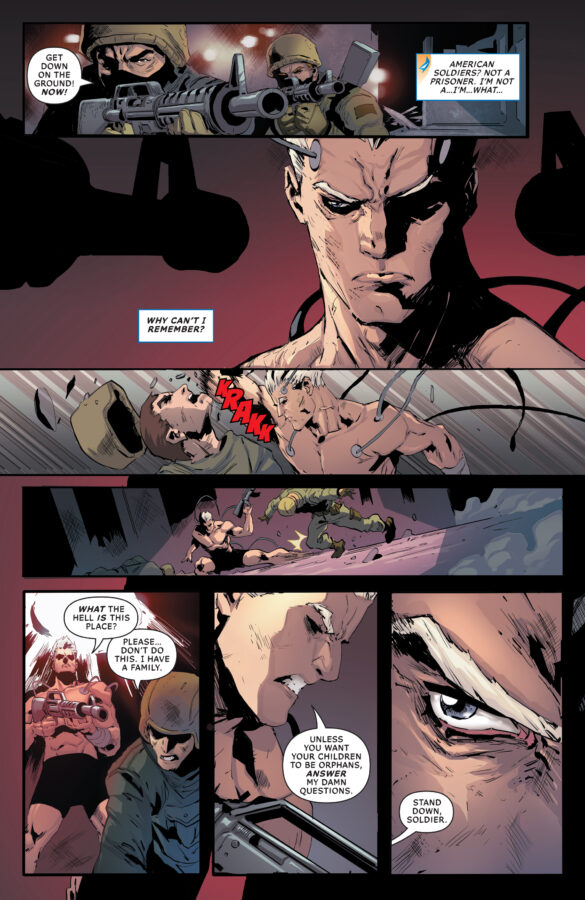 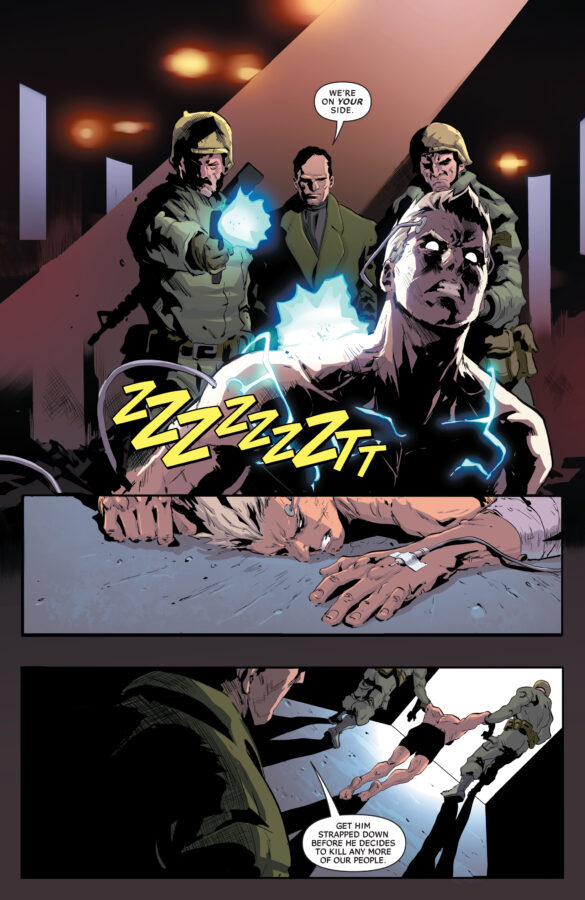 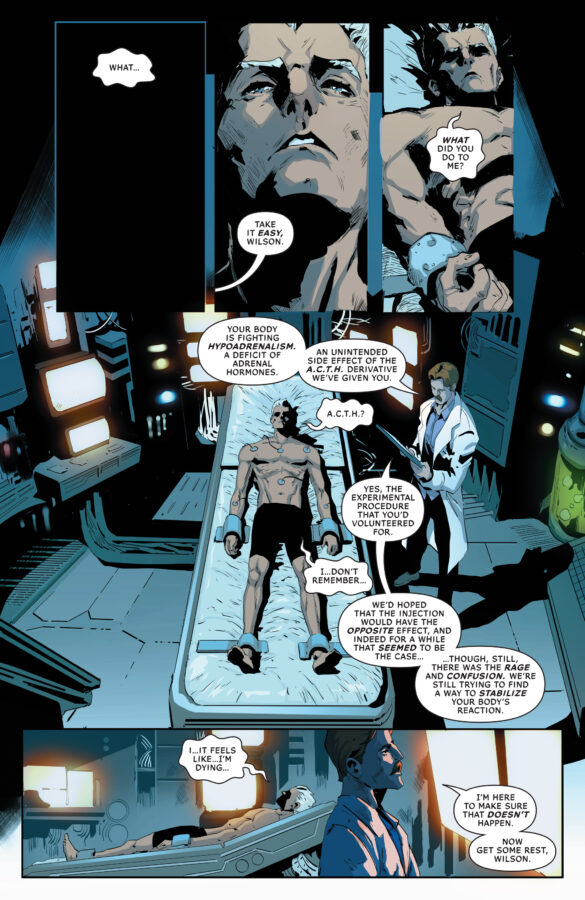 In this version of events, Slade gains his superhuman powers via a government experiment. The anti-hero started as a soldier with a lot of power, but for whatever reason decided to volunteer to be part of the military procedure. Slade’s married and his first child, Grant, has been born at this point, but the future Deathstroke is unhappy. The scientists who experiment on him all but leave him to die, but somehow, Slade survives.

There’s clearly a lot more to this story than is even being explained by Slade’s narration. He’s definitely an unreliable narrator and a bit biased as he recounts his story. I feel that the government was definitely keeping secrets from him in order to get him to cooperate. What could have been his motivation for volunteering for such a dangerous and experimental operation? Perhaps the next issue will reveal more answers about this part of Slade’s story.

Deathstroke Inc. #10 is fascinating for a variety of reasons. The time period of the story is clearly set because the story is being created by an almost completely new crew (at least for this series). Steve Wands is the only carry-over between previous issues and this one. The different creators allow for #10 to feel both like it is part of Deathstroke Inc. and a separate piece simultaneously.

I want to really highlight the work of Dexter Soy and Veronica Gandini. This issue immediately stands out as taking place in an older time based on the colors and art style. The way that the characters are drawn pulls from a previous comics era, while still somewhat remaining true to modern art. The colors are more muted than in previous issues as if looking through a lens into the past.

These subtle but noticeable differences have a huge impact on the experience of reading this issue. The entire piece is wonderful for all the little details and changes it contains, and I’m glad that there’s a chance to appreciate other comic creators and ideas. 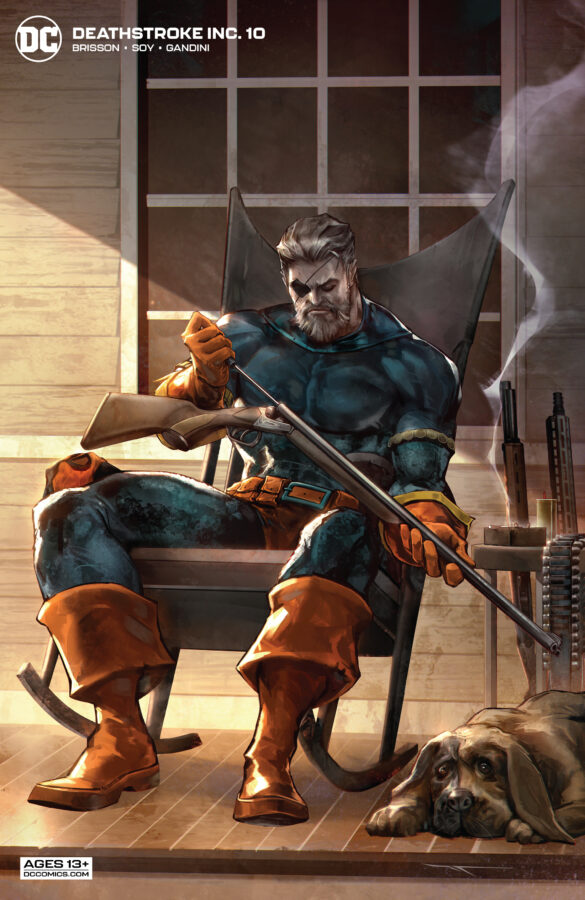 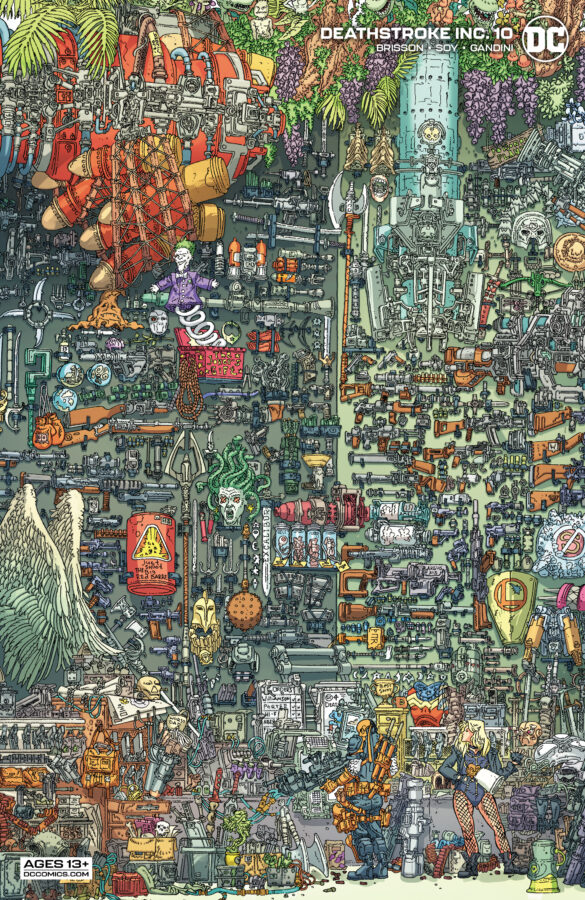 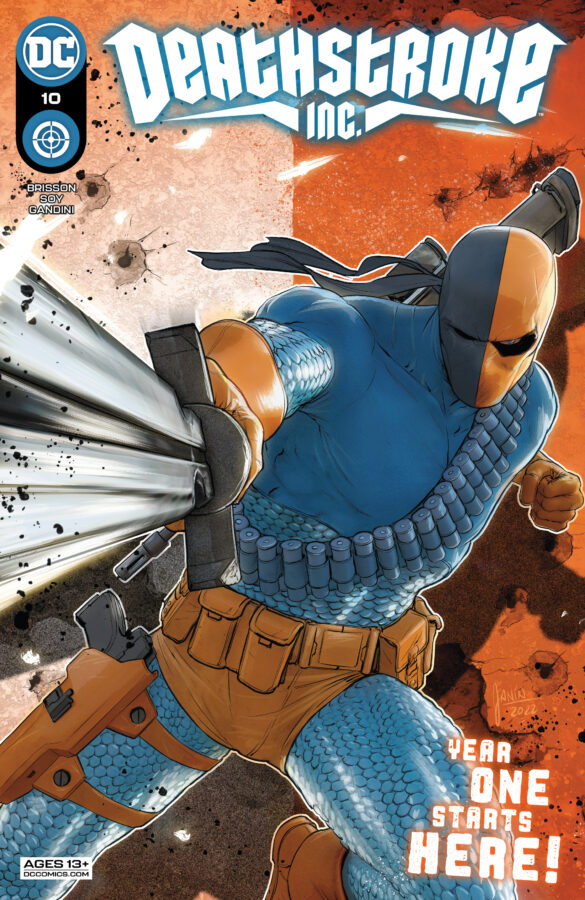 Deathstroke Inc. #10 is more than adequate. There’s a lot more to discuss in relation to the story, but it could become very spoiler-heavy and honestly, a lot of what readers want to know probably won’t be revealed until the next few issues come out. I found this issue fascinating, well-drawn, and a great set-up for the further story of “Year One”. Hopefully this issue’s team will keep up the wonderful work.

My one criticism is that it’s highly dialogue-based, not leaving much room for action. Of course, action isn’t always necessary to make a comic good or entertaining, but it just seems rather unusual for an issue of Deathstroke Inc. to not have a ton of violence and instead involve a lot of talking. Also, it’s odd that Slade’s not shown in his costume or with a sword at all. He was obviously someone before he became Deathstroke, but it just felt a little strange!

I’m looking forward to finding out more about the grey anti-hero and understanding more about what makes him tick. What did you think of this week’s issue? Are you excited to learn more about Slade Wilson’s origins? Leave a comment below.