Review: Justice League Vs The Legion Of Super-Heroes #2 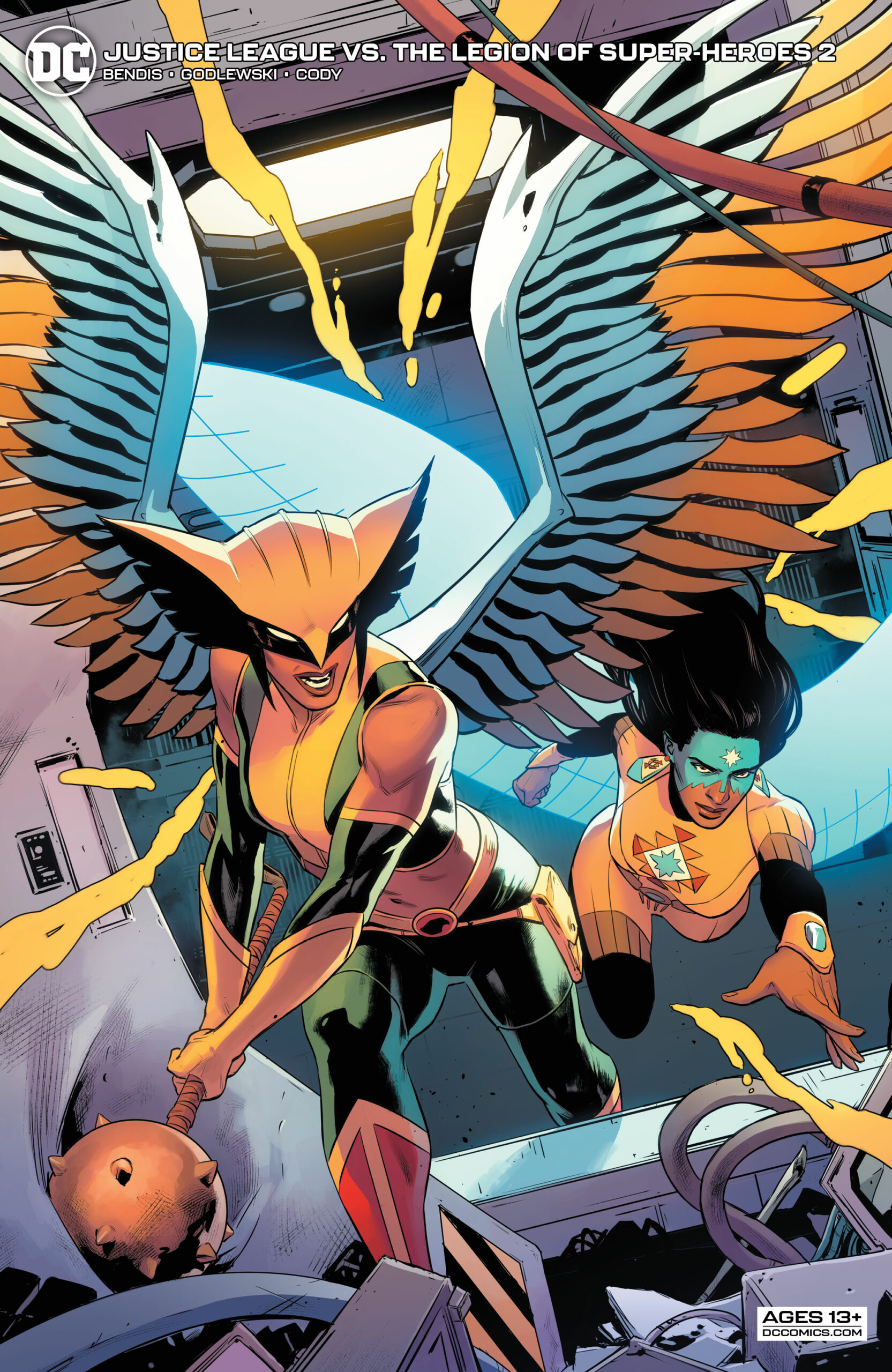 Matthew: For me, the best part of this issue is when Bendis takes the time to explore The Gold Lantern.  It seems obvious at this point that this is the story arc that would’ve launched in Legion of Super-Heroes #13 had the series not been canceled.

The first few pages are quite strong as we meet Kala Lour and get a sense of him as he’s offered the Gold Lantern ring by the 31st Century version of the Guardians of the Universe. We get to see what he believes and how it may or may not differ from the traditional modus operandi of the Green Lantern Corps.  Even Scott Godlewski’s art seems to be suited to this section in his depictions of the aliens that Kala Lour interacts with.

Derek: I agree. Bendis’ Legion of Super-Heroes title tended to quickly gloss over a lot of story, due to a large number of characters. It doesn’t help that he takes up so much space on mostly inane dialogue. So it’s great to see him actually take some time to examine this character in more depth. Gold Lantern was one of the more interesting additions to Bendis’ Legion, but he was little more than a face in the crown in the main Legion series.

Matthew: The idea that the two dark patches witnessed in the 31st and 21st centuries are a path between time periods is interesting. It will depend on where this goes in order to determine the quality of the execution. It could be an interesting idea that’s developed or it may not go any further and be something else Bendis leaves on the table.

Derek: Perhaps the Great Darkness somehow transcends time. Or is there some other reason that this story involves the 31st Century when all the other threads leading to the Dark Crisis crossover event seem focused on events in the present-day DCU? Whatever’s going on here, it seems that Gold Lantern is at the center of it.

I agree that the patches of darkness connecting the two time periods are intriguing, but it brings issues that I have with this story. In the opening recap of Justice League Vs The Legion Of Super-Heroes #2, Gold Lantern tells us, “First: Brainiac discovered a dangerous cosmic concern he calls a Great Darkness Anomaly… then he discovered that simultaneously, a thousand years ago… there is a similar Great Darkness Anomaly”.

Time doesn’t work like that! Two things cannot simultaneously happen at separate times. From the Legion’s perspective, the 21st Century occurrence of the anomaly happened – past tense. It is not happening in the past. However, I suppose I can give Bendis a pass for this, as better writers have been making the same mistake in time-travel stories. For example, Marv Wolfman was guilty of the same error in the original Crisis On Infinite Earths.

Matthew: Much like last issue, the dialogue from the Legion in Justice League Vs Legion of Super-Heroes #2 all tends to sound the same, and the members of the Justice League all have a similar reaction to waking up in the 31st Century. While dialogue that moves a story along can be effective, at times it tends to slow things down. It’s not quite as bad as it was in the first issue, but it is noticeable in the scene when the Legion and the League all convene to work out a plan.

Derek: Yes, Bendis’ dialogue is nowhere near as witty as he seems to believe it is. So, it’s good to see that Bendis is putting less emphasis on it and giving more attention to the story itself. I don’t know what the whole “Queen Naomi” stuff is about, but it seems rather irrelevant to the story at hand. It’s probably best that he follow that particular story thread in his Naomi series rather than here.

Matthew: The whole idea of this “Great Darkness” feels quite contrived. “The Great Darkness Saga” is one of the greatest Legion stories of all time, so to attempt to recast it as something else comes off as disrespectful of the amazing work of Paul Levitz and Keith Giffen.

Derek: While the Justice League Incarnate miniseries has implied that Darkseid is somehow involved with this new Great Darkness, whatever’s going on in this series seems to be just a piece of the overall story, which is all leading into Dark Crisis. However, I can see how it could feel somewhat contrived.

A lot of the changes Bendis has made to the Legion appear to just be a case of change for change’s sake. It seems a pointless reshaping of the team just to make it his own thing. So, it would seem logical to guess that Bendis is just recycling the original “Great Darkness Saga” into his own story. Perhaps it would have been better if an original title had been employed instead.

Matthew: Overall, Justice League Vs Legion of Super-Heroes #2 is a bit better than issue #1. It’s a bit more focused and there’s some really good character work with Gold Lantern. The rest of the issue is about the same; it has potential, but the big concept is so far unrealized, and the interesting aspect of Triplicate Girl that was introduced in #1 isn’t even mentioned in this issue.

Derek: I totally agree. There has been a slight improvement, but it’s mostly just more of the same. I also found it disappointing that Bendis didn’t follow up on the Triplicate Girl subplot. There’s definitely the makings of a good story here, but I remain doubtful that Bendis is up to the job. If he can focus on the story, and not inundate us with an overabundance of pointless dialogue, then this could actually be a good story.