“The Gold Lantern Saga” – Part One 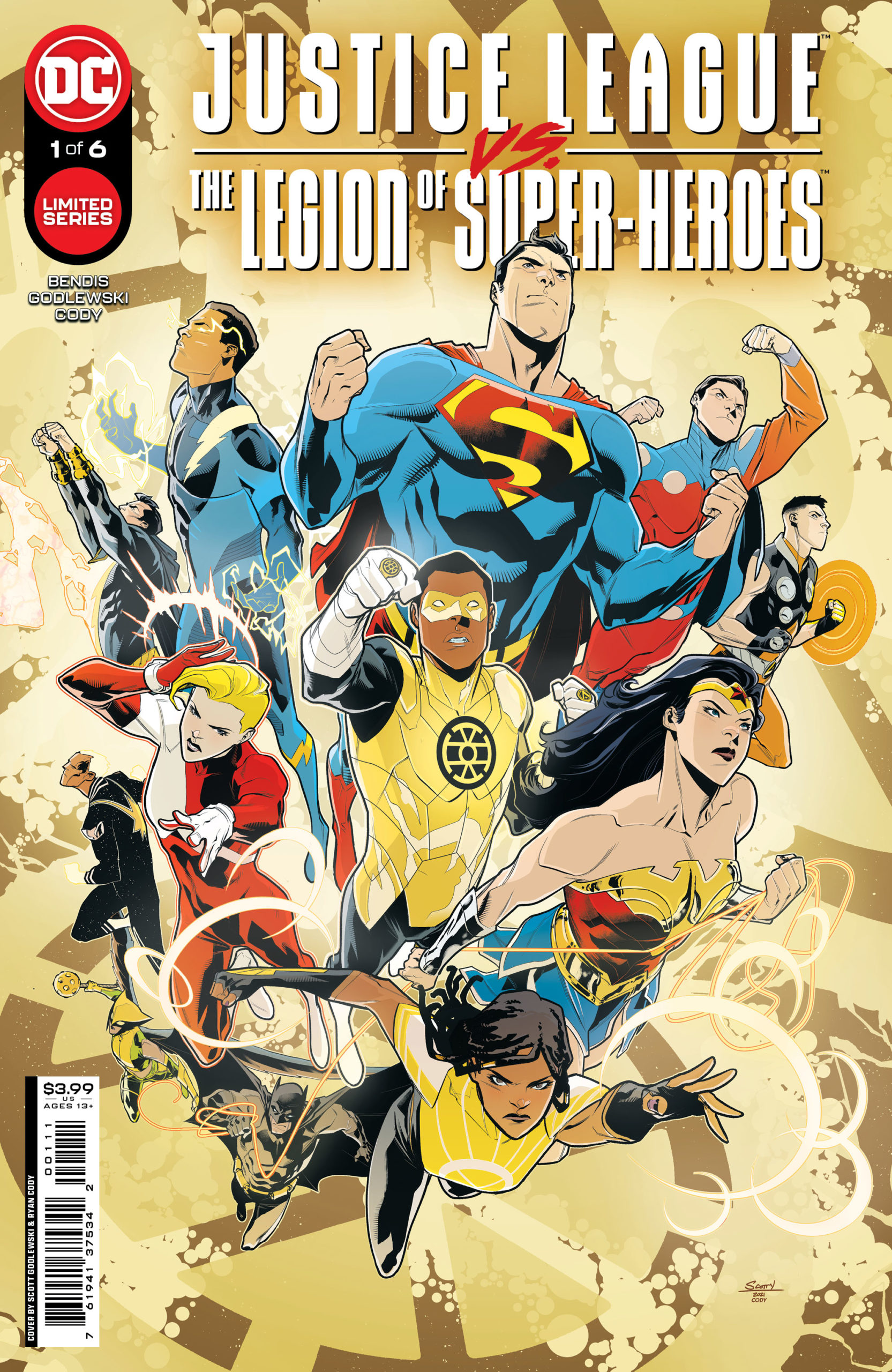 What is the connection between the secrets of the new Gold Lanterns and the coming of the Great Darkness? Find out the answers in this monumental DC epic event miniseries!

Matthew: The group scenes of the Legion in the opening sequence feel very much like classic legion in a battle moment, with Gold Lantern planting the seeds of a separate plotline.

Derek: I definitely got that feeling too. I feel that Bendis’ Legion has elements that could make this one of the great eras of the team, but he has difficulty realizing that potential. While not all of his ideas are good, there are some in this story, but will he be able to make them pay off? The Gold Lantern plot’s intriguing and I hope he fleshes it out better in the upcoming issues.

Matthew: The actual mystery’s interesting, what’s happened to one of Luornu’s bodies? While it at first appears that Bendis is going to retell how Triplicate Girl became Duo Damsel, the story goes in a different direction. No matter, it’s the basis for a good mystery. 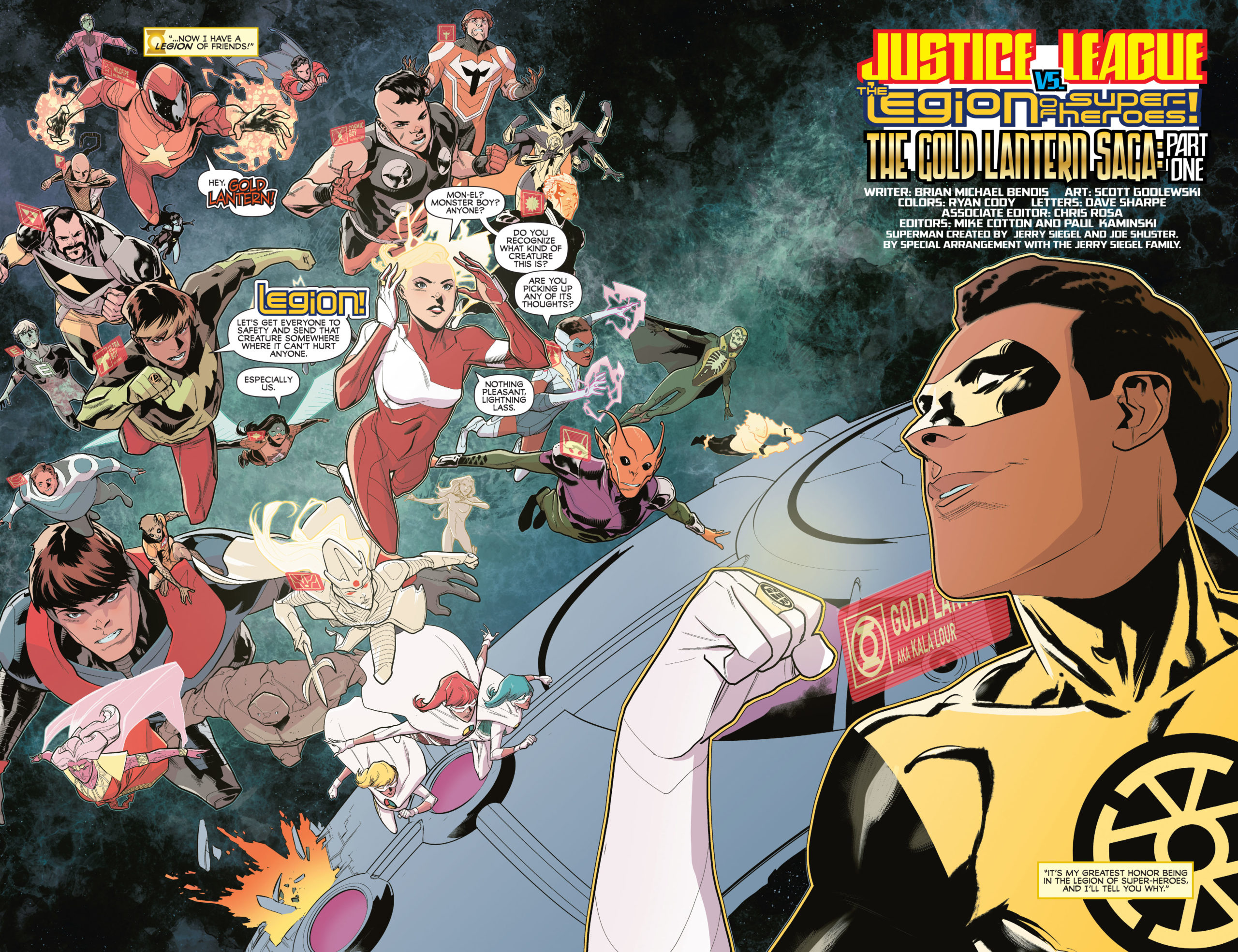 Derek: I had the same thought that Bendis was doing his own version of that classic story, and Luorno’s situation does raise some interesting questions. If one of her selves doesn’t want to remerge, should the others force her to? If they need to do so to survive, does that give them the right to force the merging? With one of the selves now significantly older than the others, what age would their merged self be – perhaps the average age of the three? So, when they split again would they all be that average age? I would also like to add, that although I’m still not used to some of the visualizations of Bendis’ Legion, they are beautifully rendered by Scott Godlewski – as is the Justice League.

Matthew: While Bendis’ use of dialogue can be effective, it just goes on too long. He doesn’t know when to stop. Every character seems compelled to speak in every panel. When it moves the plot along it works, but some characters say things that are not only non-sequiturs but completely unnecessary. Furthermore, there’s no distinction between voices. It works a bit with the Legionnaires overtalking during the opening battle sequence because it’s a bit nostalgic, but afterward, when they’re trying to figure out what happened with Luornu, the unnecessary dialogue detracts from the gravitas of the situation. 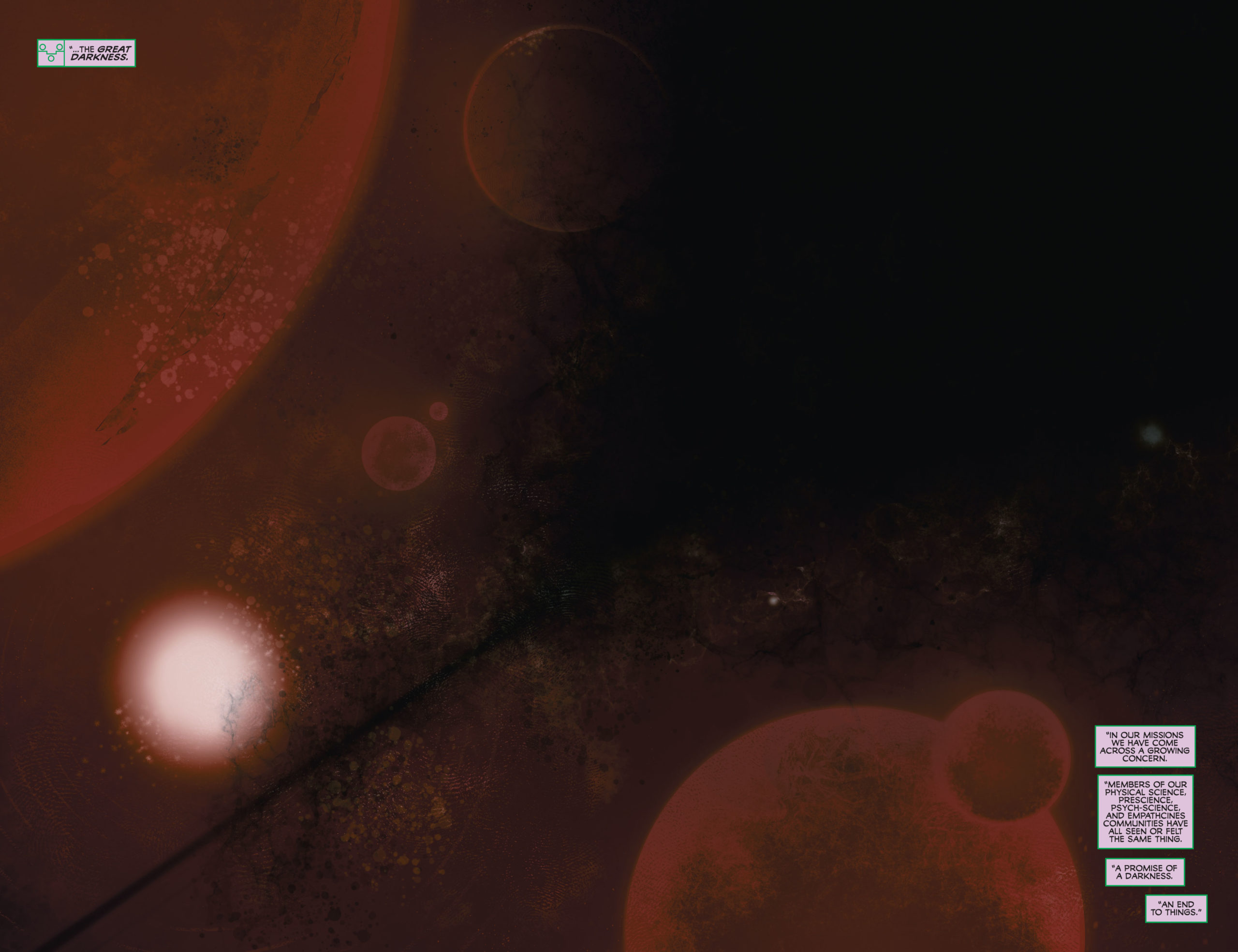 Derek: Yes, Bendis seems way too impressed with his snappy dialogue. It can be effective in small doses, but it wears thin after a while. It also uses up a lot of the page count that would be better used to tell the story. There were a number of points where I was thinking “Get on with it!”

Matthew: It’s no better with the Justice League… in fact, it’s actually worse. Not only do the Justice League overtalk, but they also sound EXACTLY like the teenage Legion from 1000 years in the future. It’s the exact same conversation at times.  It’s as if he’s made no attempt at differentiating between them or presenting accurate characterizations.

Derek: I noticed that too. I also noticed that the lineup of Bendis’ League has changed a bit from their regular title with no explanation. Diana’s back, but she had disappeared… and why is Clark the Superman featured on the covers when Jon is the only Superman in the actual story?

Matthew: The basic ideas presented in this issue have some merit and t feels like there’s potential for the story, but Bendis’s track record at DC falls somewhere between mediocre and really bad.

Derek: Justice League Vs. The Legion of Super-Heroes #1 has me feeling somewhat ambivalent. This title has a lot of potential, but I don’t know if  Bendis’ story is going to realize it. He has done some good writing in the past, but his recent work doesn’t give me a lot of faith that he will again. On the other hand, at least it looks nice, thanks to Godlewski’s art.