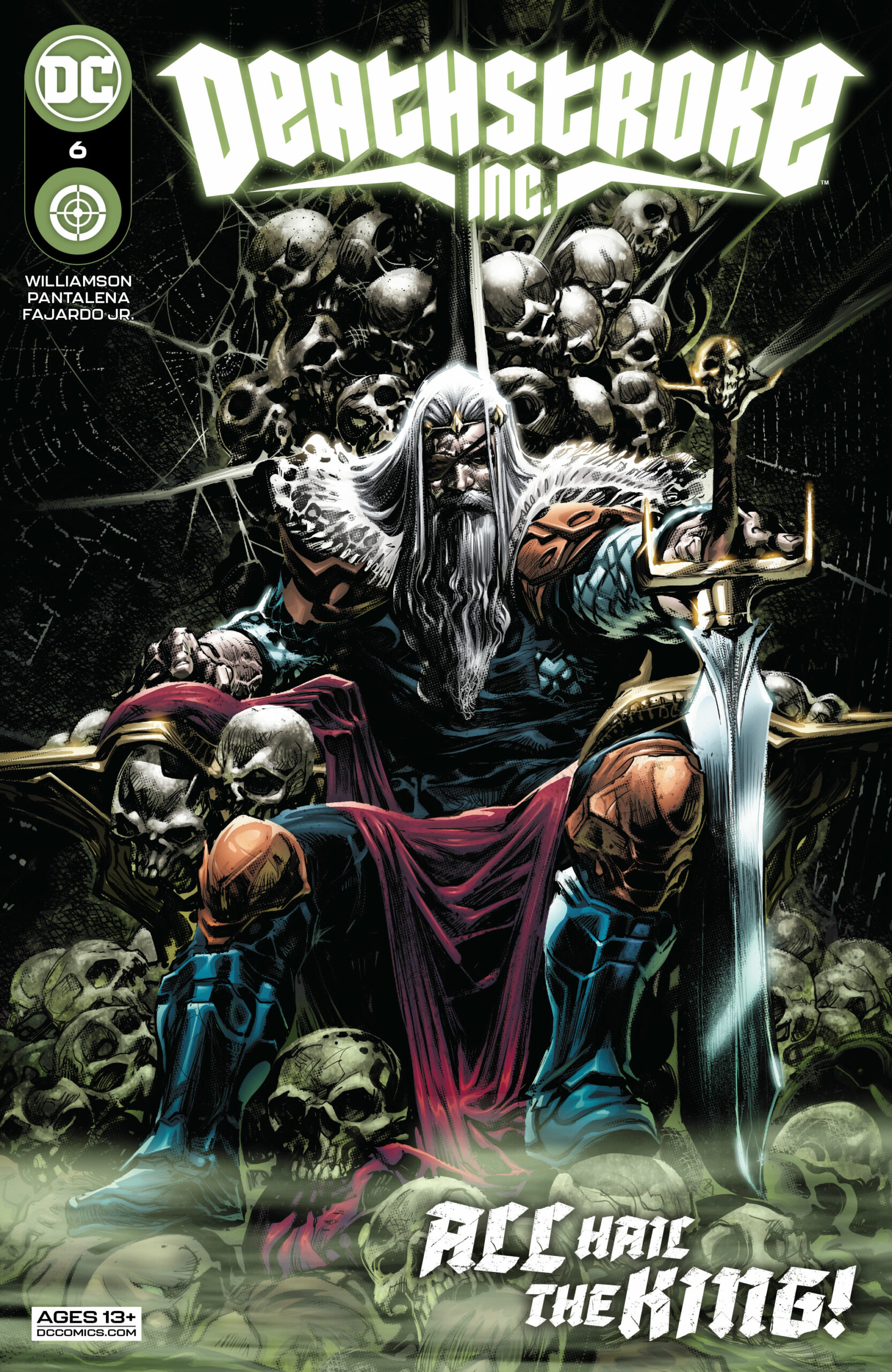 Last month’s cliffhanger left me desperate for the latest issue! Luckily, Deathstroke Inc. #6 doesn’t entirely disappoint. Having left off with Slade seizing power for himself, the story jumps right back in with a menagerie of reactions.

Turn back now if you don’t want spoilers for this issue and the series at large! (You can check out our review of previous issues at any time, however.)

Paolo Pantalena returns to the artist’s seat in this issue and I’m still finding his work a little wanting. Don’t get me wrong, he is a great artist, of that there is no doubt, it’s just that his Black Canary however often appears petite and weaker than that of previous issues’ artist, Howard Porter. Pantalena’s panels are also less dynamic than Porter’s, but that could also be due to the more scrambled story this time around. What Pantalena didn’t lack was crotch shots. I understand that superhero costumes are tight, but sir, this is not what I read comics for!

A newcomer to this particular comic also arrived. Instead of the usual color artist Hi-Fi Colors, Romulo Fajardo Jr. brought his talents to Deathstroke Inc. Fajardo seems to have an affinity for vibrant colors with each primary offering being highly saturated from panel to panel. The colors this go around are fine but are more contrasting than complimentary throughout the issue. This added back some of the dynamism of the art that was lacking from Pantalena.

The story for this issue meandered a bit. Despite celebrating Deathstroke’s ascent to power and dropping the title in the text, this chapter was more of a transitional piece than essential reading. It was a good issue, but nothing really exciting happened.

Even my favorite part of the book, when Slade and Dinah talk about the former’s power grab, was interesting at best. The conversation between the former allies is important and reveals a lot of their motivations going forward, but an edge-of-your-seat thriller this is not. Not even our first sight of the full Justice League (and Black Canary’s paramour Green Arrow) could fix that problem. Honestly, the most titillating part of the issue was in the last couple of pages, after Deathstroke officially seated himself on a throne and founded Deathstroke Inc. 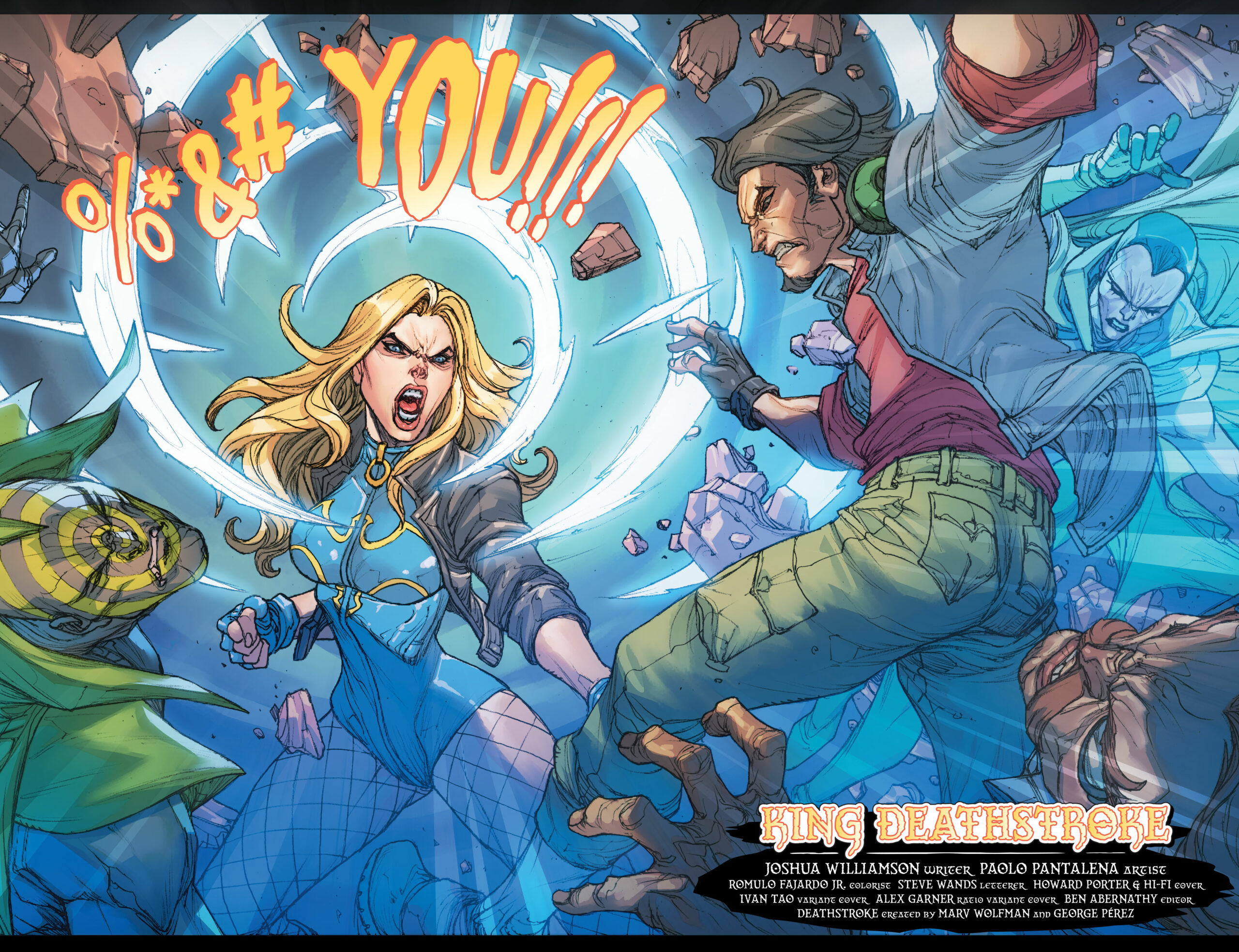 Two mysterious figures clad in costumes corresponding to Deathstroke’s own discuss their adventures on Lazarus Island and their connection to the “nuts” antihero. Ravager finishes the issue by stating that what Deathstroke needs to pull him back from the edge is his family. I’m excited to see they could help him, but is he already too far gone?

The Baddest of the Bad

In his conversation with Black Canary, Deathstroke calls himself “the baddest of the bad”. I’m not sure we’ve seen enough evidence of that recently. Sure, Slade kills three people simply because they talk back or oppose his ideologies, but all three of them were also villains who charged different people money for saving their lives. So… is he really that bad?

Sure, in the established canon, Deathstroke has done some questionable stuff. This series isn’t the first time he’s killed, nor will it be the last. He betrays Dinah to gain power, but also because he wants her to partner with him in keeping the Secret Society under control. The power Slade has gained has definitely gone to his head (kind of a tacky throne, dude) and he’s definitely going off the deep end by only seeing the world in black and white.

The thing about Slade Wilson, or any anti-hero, is that they’re more than their last actions. Instead of saying that Deathstroke’s the absolute worst, I’d just say he’s complicated. Slade likes to flirt with the boundaries of what’s right and wrong but he’s never fully either one, and that’s what makes him so fascinating. It remains to be seen if he’ll ever view himself that way though.

Deathstroke Inc. #6 was alright. The issue won’t be an award winner and receives my lowest rating for an issue in this series. In all honesty, it mostly just gets us from #5 to #7. Examining how perverted Deathstroke’s view of the world and his place in it has become will never not be interesting, so I think that Slade and Dinah are a long way off from kissing and making up (as I’m sure the next issue will severely highlight). I believe in the connection these two have shared. Neither of them is truly good or evil and it will be that greyness that will bring them to ally together once more.

The next issue’s bound to be interesting because of the new arrivals, though I’m not sure that they’ll be bringing Slade back to the light (or if that’s what readers even want). The new dynamics will be critical to the continuing story and the same can be said as we watch Deathstroke and Black Canary work with their respective teams; the king with Deathstroke Inc. and our heroine with the Justice League. I don’t foresee a faceoff between the two groups yet, but it’s bound to come later.

What did you think of this week’s issue? Is Deathstroke able or worthy of being saved? Is Black Canary turning her back too soon? Drop a comment below.

Sideshow Release “Bring On The Rain” By Jim Lee