“Ghosts of a Different Life” 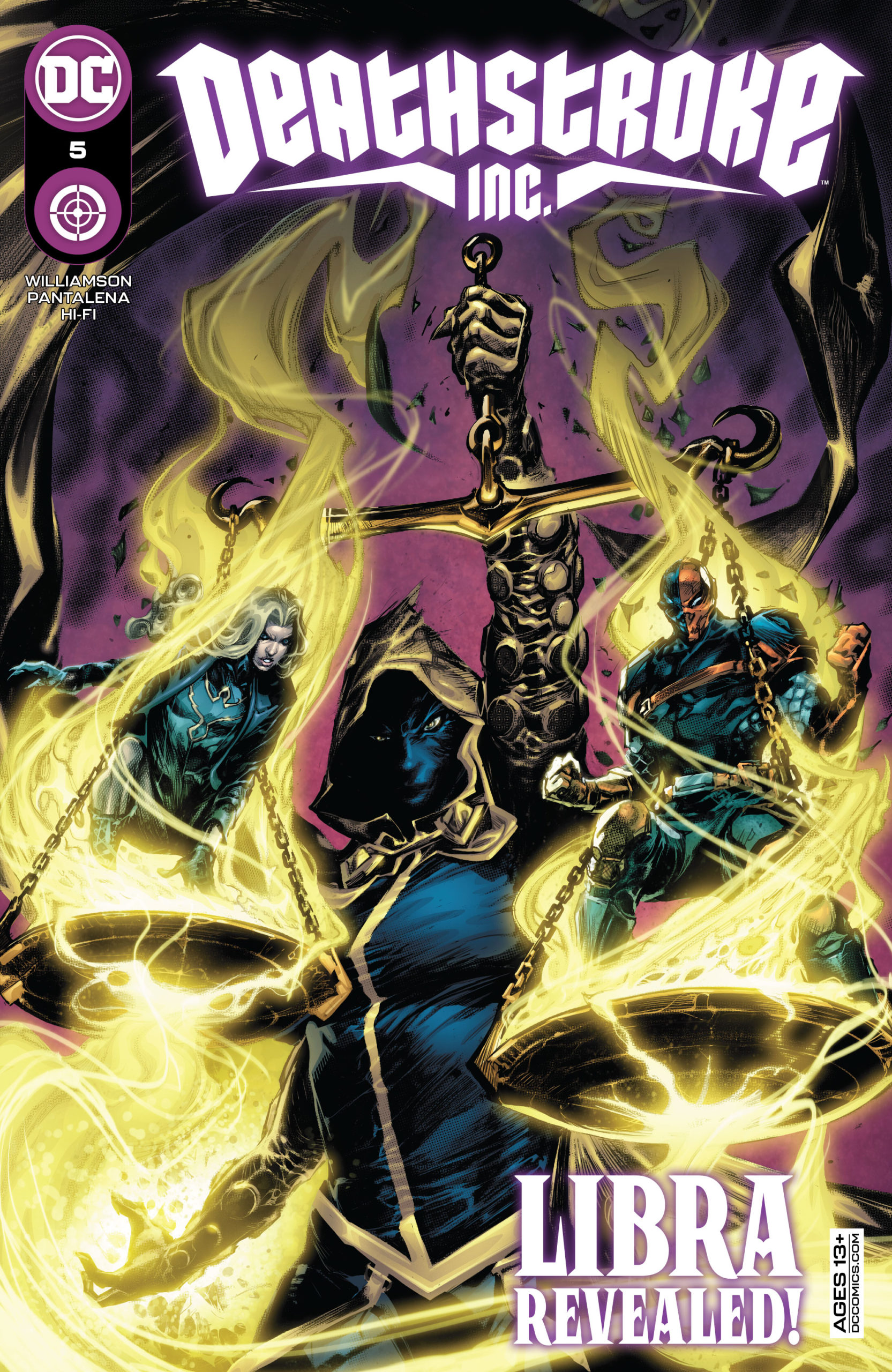 Has anybody else been waiting for Deathstroke Inc. #5 with bated breath!? Just me? In case you’ve forgotten, Deathstroke and Black Canary’s fates were left hanging, at the end of the last issue. Things resolve themselves to some extent, but I don’t want to spoil too much. There’s a lot of action to unpack and discuss, so let’s dig in!

This is your last chance to turn back before major spoilers for this issue and the last one!

Sweet Dreams are Made of This

Deathstroke wasn’t looking so hot when we last saw him. He and Black Canary had just been sent to the ghost zone where Slade immediately collapsed. They’d both just been fighting for their lives against the T.R.U.S.T. and Deathstroke’s injuries were a bit severe. Despite his extreme healing abilities, it still takes a nice Black Canary sonic scream for the anti-hero to get back up.

Our heroes enter the haunted house we saw in the last issue. Both question the sanity of where they are and their choices, but there’s only one way forward. For a second. Of course, since this place is the stuff of nightmares, Deathstroke and Black Canary come to divided paths with each of their emblems above the doors. The two reluctantly part ways and pass through them.

Enter the unreality. Each protagonist is presented with a mirror dream world (with fantastic new costumes). In Deathstroke’s, he’s a hero training the Teen Titans, and his deceased son is still alive. Black Canary enters a world where her mother was known as the antagonist Red Canary and the head of some villainous familiar faces. Obviously, Slade and Dinah are heartbroken by these false visages of their deceased loved ones.

After the horror scape, our heroes move on and find themselves face to face with Libra and her coalition of antagonists… but we’ll get back to that.

It’s important to note in this issue, especially following the previous one, how much Deathstroke and Black Canary have both started to rely on their partnership. They were brought together for nefarious reasons, but Slade and Dinah working together is the only reason they’ve each survived their missions. Libra herself confirms this in her villain’s monologue, explaining that balance is essential to the world.

In many ways, Deathstroke and Black Canary are two sides of the same coin. He’s a former villain who’s trying to give back to the world as atonement, whereas Dinah’s a hero who’s made questionable choices during her tenure as Black Canary. Neither one is purely good or bad but a nice mix of grey morality. They depend on each other for balancing their choices and actions, even their emotions. Even in the ghost zone, they go through their ordeals facing their deceased loved ones on split pages. One panel was even divided to resemble a mirror of the terrors each faced. i honestly feel that neither Deathstroke nor Black Canary could have made it through these trials alone.

For two people who could barely tolerate each other in the first issue, Dinah and Slade have come a long way. They have gone through a lot together and helped each other in their growth. The two are almost like partners, a surprising duo that nevertheless keeps building each other up… for a while, at least.

The story this week was a lot. Do you know what else was a lot? The art style we got from Paolo Pantalena. From the beginning of the issue, I felt like something was different. It took me until the title page to realize that the artist for this week’s issue was new.

I had a really hard time with Pantalena’s art style, I won’t lie. Deathstroke looked alright and most of the villains seemed as they should, but Black Canary was problematic for me. Obviously, Dinah is a sexy woman and character, but where her proportions were ultra curvy and far too thin before, they became truly impossible in this issue. Pantalena drew Dinah’s waist and rib cage so small that it didn’t make sense in some parts. People can be super thin and in excellent shape, but there are such things as internal organs that exist in women’s bodies.

I get that it’s a comic and women have been drawn unrealistically for years, but I missed the Black Canary I’d grown used to. She’s a total badass and strong as hell, and I’ve loved getting to read more about her in this series. This pouty-faced femme did not feel the same, however, and I don’t think heroes should have the same body shape as Disney princesses. Especially not one whose powers rely on the ability to breathe strong and deep.

Deathstroke Inc. #5 was a true mixed bag for me. The scenes in the ghost zone were incredibly beautiful, detailed, and told stellar stories in their sequences. I wasn’t as enthused as I’d have liked to have been by the time we learned more about T.R.U.S.T. and the payoff wasn’t as juicy as anticipated. Additionally, I was disappointed by Black Canary’s depiction throughout the issue.

I do think the final scene has immense potential and am excited to see what Joshua Williamson and the team behind Deathstroke Inc. come up with next. For now, though, I’m going to keep that final image of Deathstroke in my mind’s eye.