“The Biggest Score Ever” – Part Two, and “Playing At Gods” 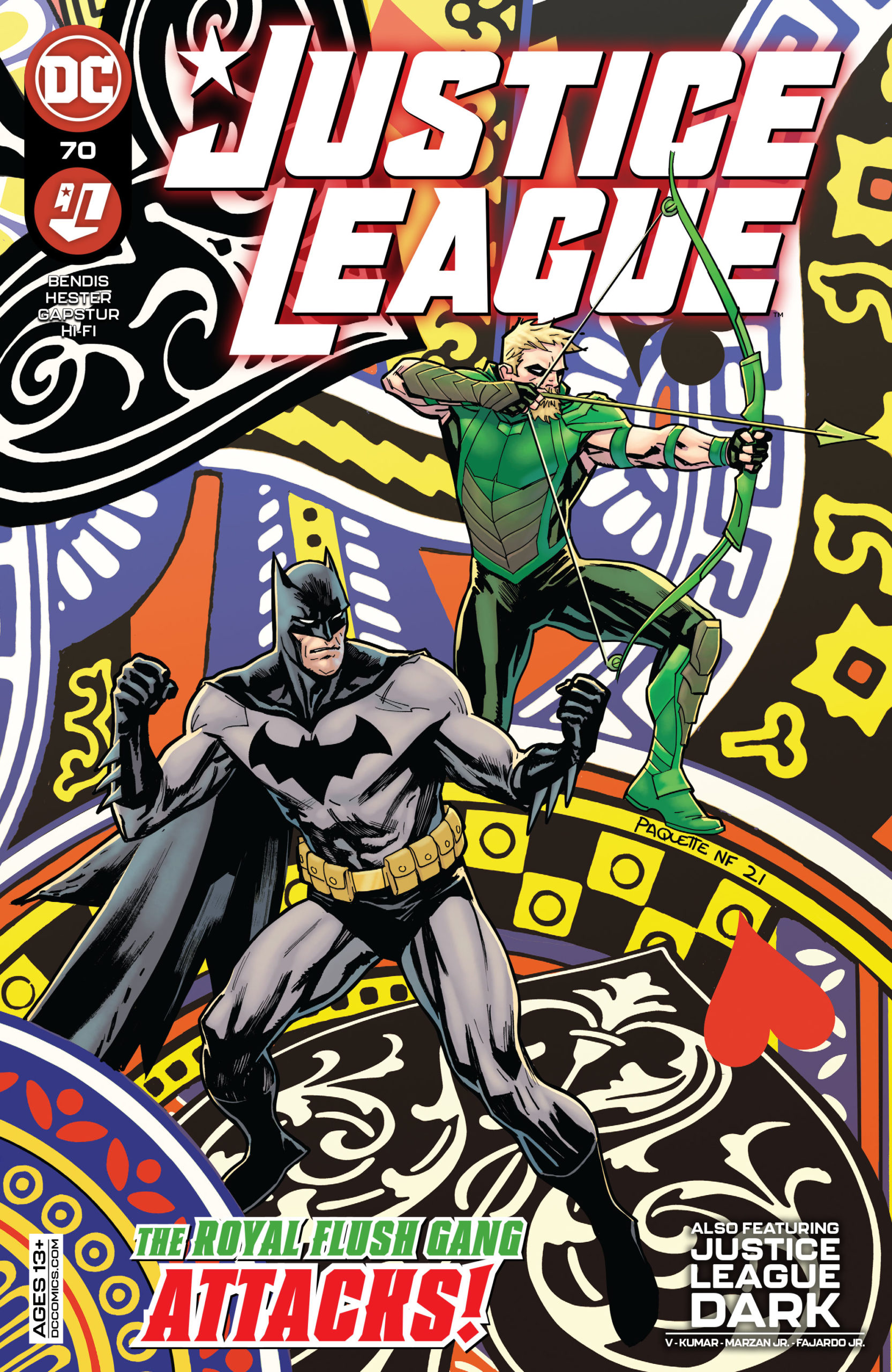 Superman scrambles to find his highjacked Fortress of Solitude while Leviathan channels his inner Amway, in this week’s Justice League #70.

The Fortress of Solitude has been stolen. That’s right – a giant Kryptonian crystal cave full of *extremely* powerful alien technology has up and disappeared. Needless to say, Superman’s upset. Elsewhere, while the Justice League scours the planet looking for The Man of Steel’s lost secret lair, Mark Shaw (aka Leviathan) tries to sweet-talk the Royal Flush gang into joining his “new world order.”

Once again, Brian Michael Bendis is using Justice League to return to one of his previous storylines from another book. For those of you who don’t know, Leviathan is the villain from Bendis’ 2019 Event Leviathan mini-series; a summer event that spun out of the writer’s work on Action Comics. Essentially, it’s a spy story. Talia al Ghul’s Leviathan organization was coopted by Mark Shaw: a former manhunter who took on a new villainous persona conveniently called Leviathan. Anyway, despite boasting some beautiful Alex Malev artwork, the book was a bit of a bust. Nevertheless, Bendis had plans for the new(ish) supervillain, so I guess he decided it would be a good idea to shoehorn him into Justice League.

This seems to be Bendis’ MO for his entire JL run. Each of his arcs so far has riffed off his previous DC work. The first dealt with his Naomi storyline, after that, he pivoted to a dangling plot thread from Superman, and now he’s readdressing Event Leviathan. I’m starting to think that Bendis only had 5 ideas for the DCU and is simply recycling them for Justice League. Honestly, though, the whole Leviathan recruitment drive wouldn’t be so bad if the previous Justice League run didn’t have a similar storyline with Lex Luthor and the Legion of Doom. Overall, the issue reads fine. It’s just the context surrounding the issue that’s problematic.

Once again, it’s really nice to have Phil Hester back working on this book, as I’ve been impressed with his art on this title. Not only is his work creative and aesthetically interesting, but his presence also creates a sense of visual continuity that the book desperately needs. For a while there, it seemed like Justice League would change art teams like people change underwear. This created a certain disjointed reading experience that could easily jar readers out of their suspension of disbelief. Hester’s quality work really provides an artistic identity to this book – something that it’s sorely lacked since David Marquez left the title at the end of Bendis’ first arc.

The JLD continue their struggle against Merlin, as the evil sorcerer’s plan begins to come to fruition. Having summoned the Atlantean mage Arion, the wizard is one step closer to dominating the realm of magic. He’s also managed to unleash the Upsidedown Man, who has taken over Zatanna’s body. So, the JLD’s essentially dealing with two crises at once.

That being said, JLD has largely been ruined for me. Due to a scheduling snafu from a few weeks ago, DC released the Justice League Dark Annual #1 early. This annual was supposed to be a coda for Ram V’s story which technically ends in Justice League #71. Therefore, by reviewing the Annual, I had certain events spoiled for me, which made reading this issue somewhat anti-climatic. It’s no fun knowing what’s coming down the pipeline, and it’s a real shame too. I’ve really enjoyed these backups, so would’ve liked to have been naturally surprised by the events that transpired in this issue. However, for those of you who haven’t read Justice League Dark Annual #1, this should be a nice twist in the story.

Once again, Justice League #70 is a mixed bag. Bendis’ script is fine but unimaginative. The art by Hester and Erick Gapstur on the main story, and Sumit Kumar, with Jose Marzan Jr. on JLD is fantastic, even though the latter really deserve their own title. These are all things I’ve said before, and I have a sneaking suspicion I’ll be saying them again. Luckily, DC has heard my cries of frustration, and it looks like they’ve hired a new creative team, which is slated to begin in April with issue #75. Hallelujah.