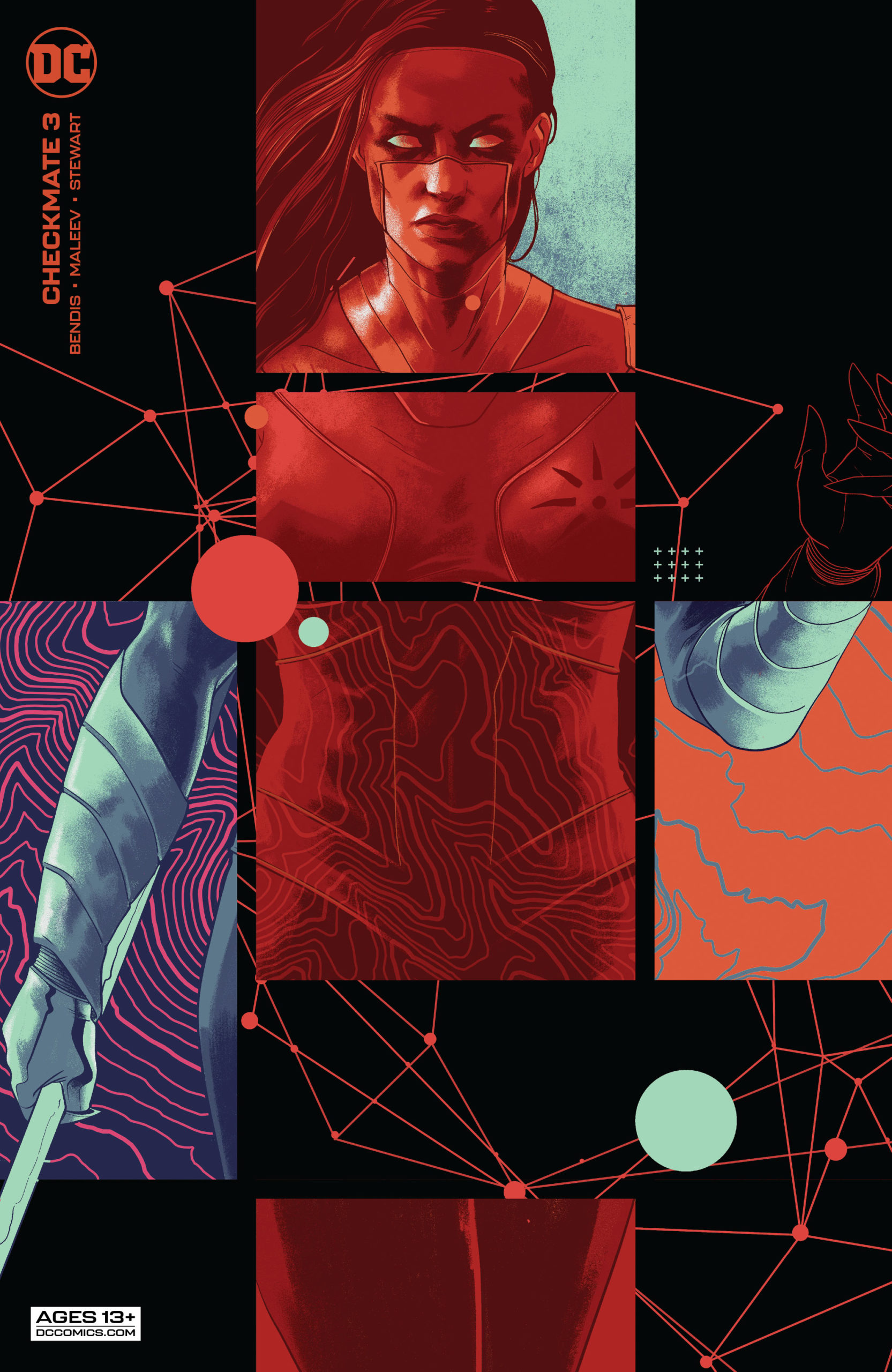 After last month’s issue jumping around too much and now (finally) answering its cover’s question, Checkmate #3 continues to deliver more of the same. Jumping between different time frames continues to be confusing, though the story does take a tiny step forward. The most frustrating part of this issue, and in turn the series, as the mystery gets deeper, is that we still don’t really know what Leviathan is after. At least not without a fistful of exposition. 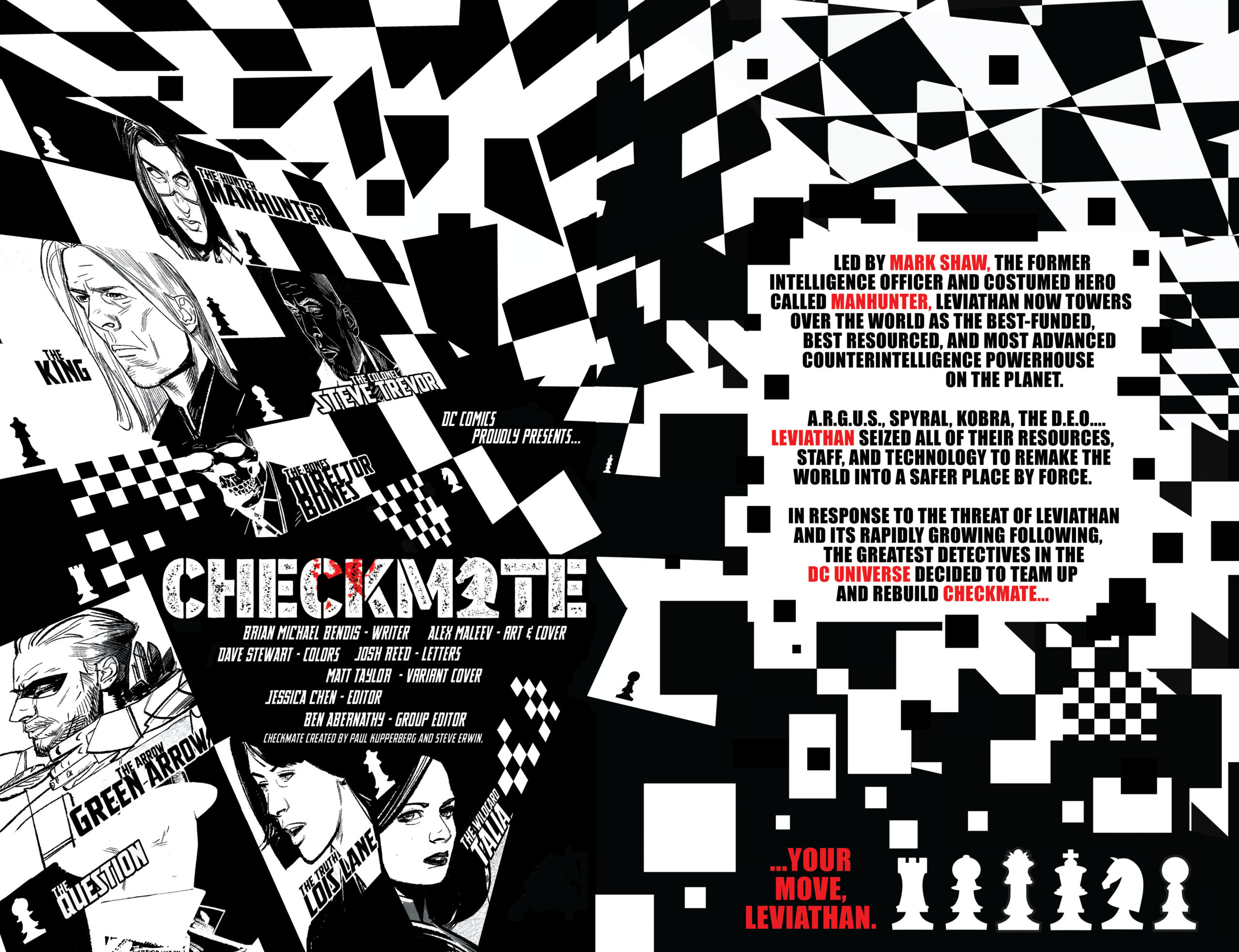 Checkmate #3 does do a great job at splitting its time between the titular heroes and Leviathan. The problem is, when we’re with them, it’s rarely for anything more than exposition… at best. There’s a scene with Superman talking with Mark Shaw and I’m not 100% sure what was accomplished. This is a theme whenever members of Leviathan are on the page, as there’s a lot of dialogue, but I’m not even getting clues to help me figure out what anyone is actually after.

The best Checkmate interactions come, once again, from The Question and Green Arrow. While it seems they’re here largely as comic relief, they are my breakout stars. More of that, please. Checkmate #3’s biggest problem with the team is that instead of us going along for the ride of solving the mystery, Lois Lane just so happens to have all the answers. We’ve been in the room with her whenever she has the opportunity to pick up some clues and, more often than not, there aren’t any. How is she getting to the conclusions she’s getting to?

Once again, that’s an issue that a reader may not butt up against in the first few issues, but Checkmate #3 marks the halfway point for this miniseries. After these three issues, I’m no closer to understanding what’s going on in the mystery than I was after reading the first. With only three issues left, there are a lot of questions that need to be answered. Unless this series is setting something else up, the final three issues are likely going to feel rushed and even more confusing.

While Brian Michael Bendis is losing me on the main plot, he’s killing it with most of the dialogue. The panels with Director Bones and Steve Trevor are fun (though, it’s weird that they blow off Manhunter). As mentioned above, The Question and Green Arrow are easily the best part of the last two issues and are the highlight of the books. I’m not sure if this is a conscious choice Bendis is making or not, but I’d love to see these two characters spin out into their own series after this.

Alex Maleev continues to be the perfect artist for Checkmate #3. While the plot isn’t exactly hitting those mystery buttons, Maleev’s art, along with David Stewart’s colors, really pulls this whole thing together. I honestly have zero complaints in the art department… it’s one of the most beautiful books out right now.

Checkmate #3 has all the pieces it needs to be an incredible spy thriller, but it doesn’t stick the landing. Maybe something’s coming to pull everything together, but I’m not sure how this series is going to wrap up in a satisfying way. As long as The Question and Green Arrow keep having some panel time, however, I’ll be here to the bitter end.

Elias Toufexis To Voice the Penguin in ‘Gotham Knights’ Game