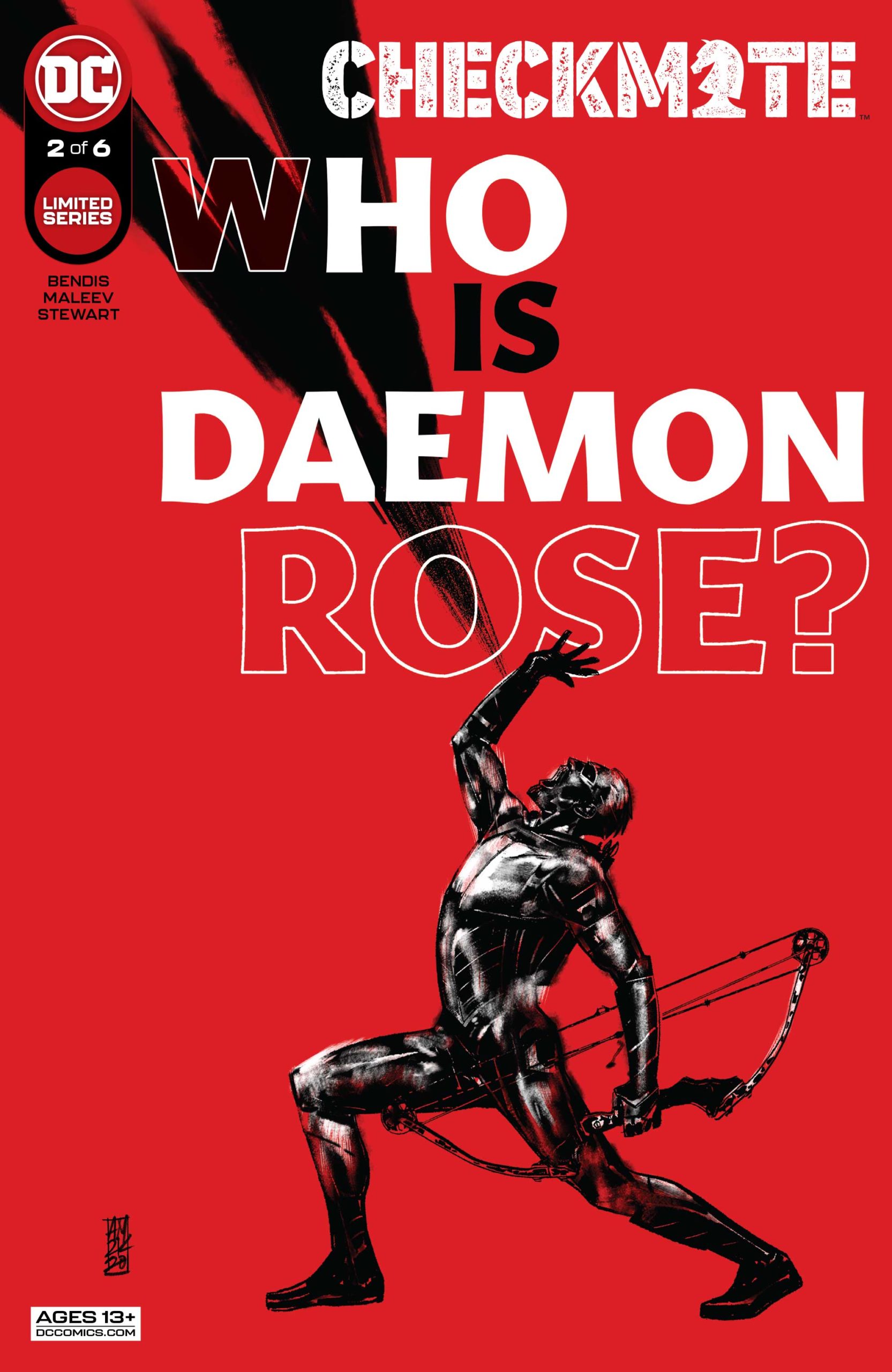 Checkmate #2 is weird. Right off the bat, the cover asks a question that the issue never seems to touch on, and that kind of sets the tone for the whole issue. If I’m being honest, I did not like the book one bit, after my first read-through. It took a second reading to appreciate what was happening here and while I think there is value for books that give you more on additional readings, the first reading should grab you too.

The biggest problem with Checkmate #2 is that the timeline seems overly convoluted. Yes, the first issue establishes that this is a book that’s going to jump around (and it worked last month); but it seems like, within those timeframes, there are references to OTHER time frames. It’s just a bit much. I’m not looking for linear storytelling, but I’d like to know when and where I’m at in the story.

The biggest highlight for me is the scene with Oliver Queen and The Question. Their banter back and forth, while they’re protecting Lois, is top-notch. Honestly, comedic spy thrillers don’t get enough love, and Brian Michael Bendis is a pro at it. When this mini-series is all said and done, I’d love to get a (longer) mini-series with The Adventures of Ollie and Q; I fear that with Checkmate only being six issues long, we won’t get much of their team-up.

Checkmate #2 does very little to grab my attention for the rest of the issue. There seem to be more and more questions without anything getting answered, which is normally fine – when you’re not limited in how many issues you have in which to tell your story. I will say the B plot with Talia is interesting, however the scenes with her in this issue were the most confusing to follow. It feels like there’s a page missing before going into a series of panels that’s hard to follow (admittedly, this could be down to reading it digitally vs. physically). 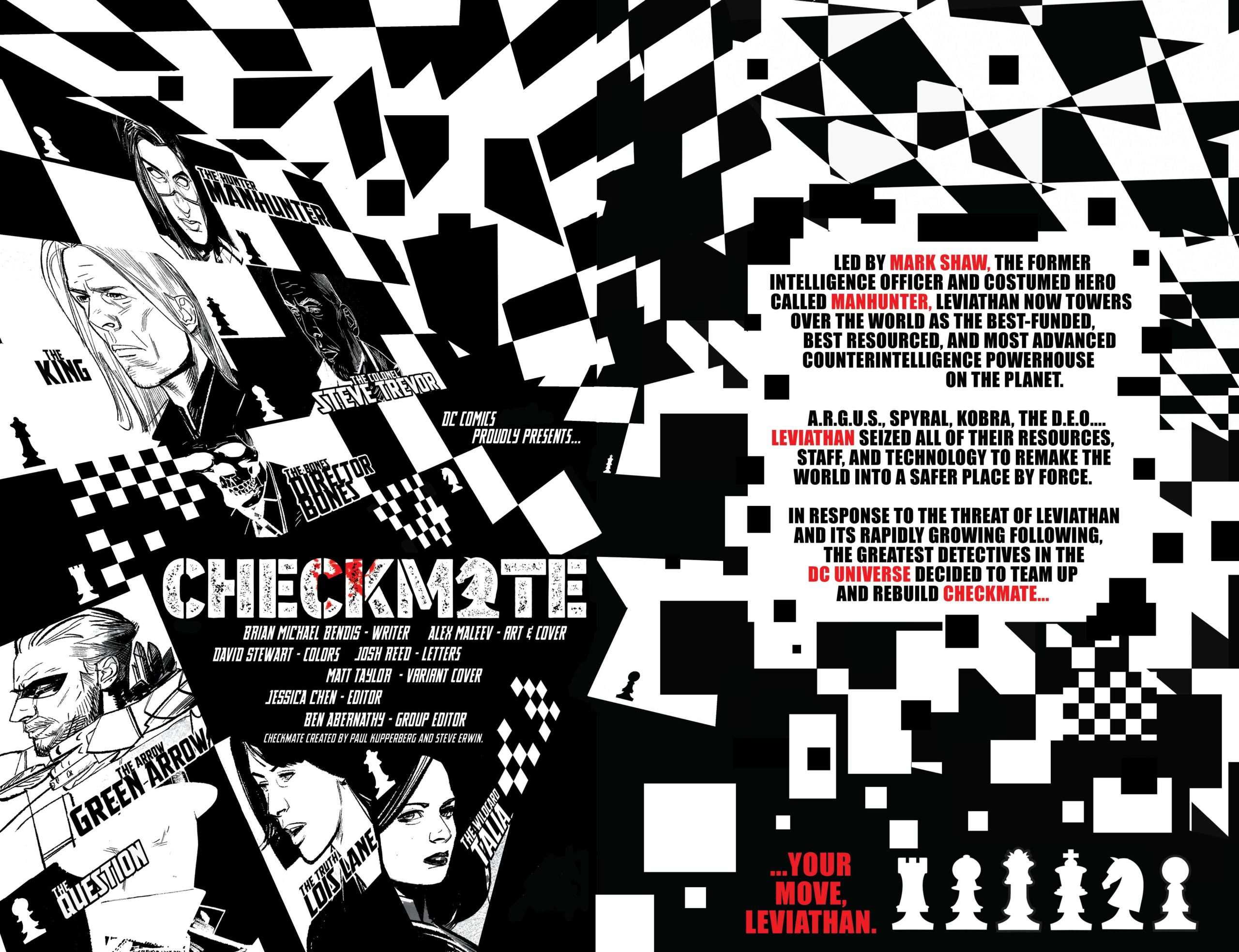 I’m not ready to give up on Checkmate yet; there’s a lot of promise. I normally read issues twice, especially if I’m reviewing them, so it wasn’t a big deal to do it to find that promise. Bendis can be a brilliant writer and there is no complaint about having to read his dialogue twice, but I do wish that his overall story was laid out better for this second issue. I can actually see some readers being turned off enough to step away from the series. If you’re one of those readers, I encourage you to give Checkmate #2 a second reading, preferably in the physical format, as I think you’ll find the same promise I did by doing so.

Alex Maleev’s art and David Stewart’s colors are exactly what I want them to be. The book would lose a lot of its luster if these two titans didn’t grab the exact feel of a spy thriller on these pages. My only complaint, and this may fall on the shoulders of the entire creative team, is the layout for certain pages. The Talia scene, in particular, can be hard to follow because there are so many panels in two pages and I got lost in both read-throughs.

Checkmate #2 doesn’t fire on the same cylinders that the first issue did, but there’s still time for the story to find itself and hit a home run. It did give us a great scene between Oliver Queen and The Question though, which is worth the price of admission alone.