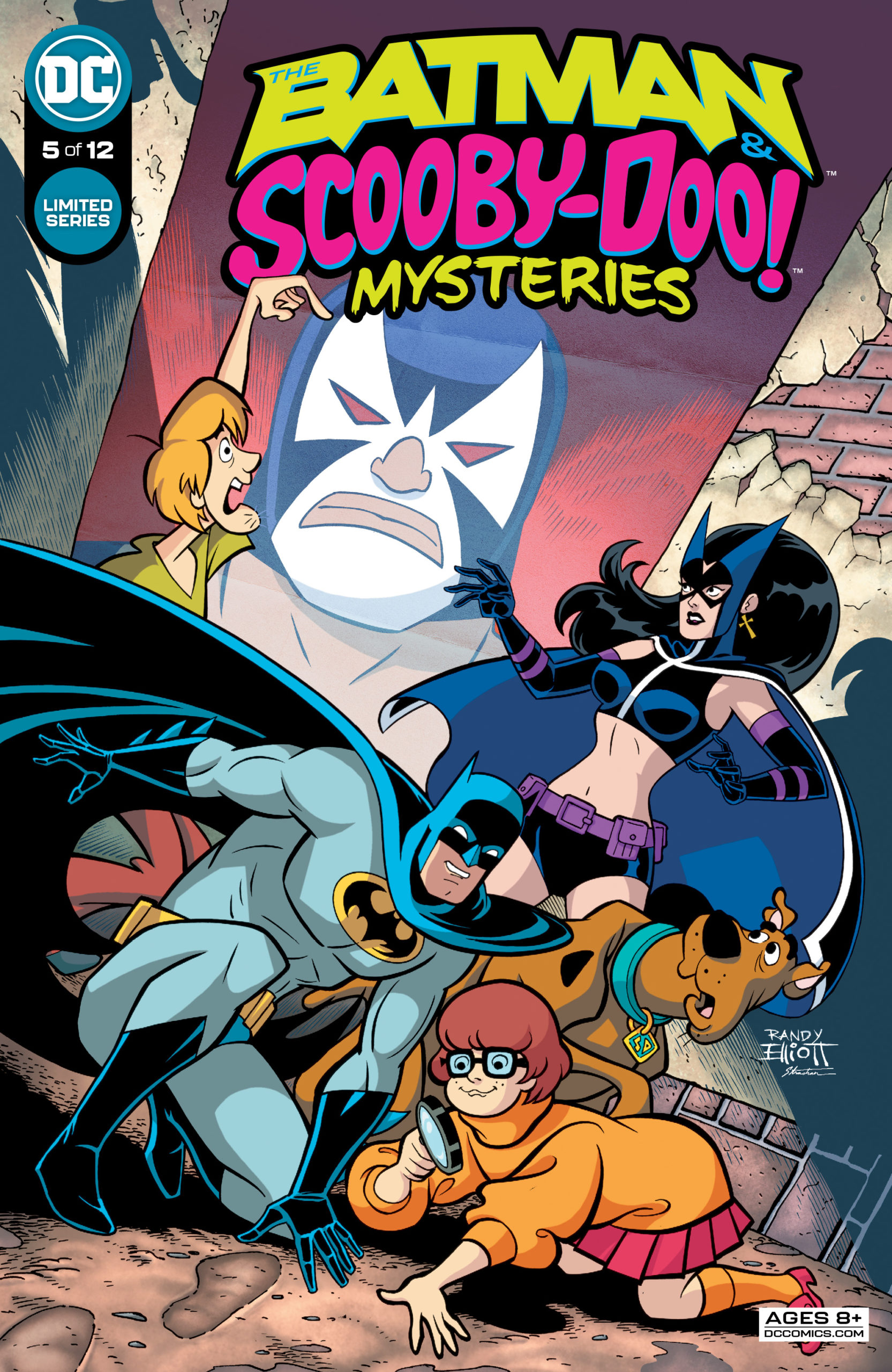 I’m officially declaring August to be the month of woman power. First, the pure [email protected]$$ery of the ladies of The Suicide Squad and now, The Batman & Scooby-Doo Mysteries #5 has finally delivered a female driven issue! Batman and Scooby are still at the foreground of mystery solving, but they end up becoming more of background characters to Huntress, Talia Al Ghul, and Velma. Finally!

Let’s break it down further., though I do recommend catching up on previous issues before reading ahead!

The art for this issue was still up to the standard we’ve expected for this series. Nothing too exceptional, although there were a variety of new characters presented to us. This issue was also more on brand for what could be considered a Batman and Scooby-Doo mystery, compared to previous offerings.

Talia Al Ghul’s father gets kidnapped and so she recruits Velma to try and help her discover why and where he was taken. The issue sets up Bane as the villain behind Al Ghul’s hijacking, which made the story feel very relevant to the Batman universe. I’m still waiting for a villain from the Scooby-Doo stories to surface, so fingers crossed. It was fun to see two of the main villains from the Nolan Dark Knight trilogy in the issue however (or were they?).

There were a few key details that stood out in The Batman & Scooby-Doo Mysteries #5. Talia’s jet was sleek, but may or may not have resembled a paper airplane. I’ve also always loved the name of Ra’s Al Ghul’s “Lazarus pits” because of the way he maintains his life. Talia and Batman appear to have an on again/off again relationship, and Talia never calls Batman by name, most referring to him as “beloved” and other pet names. We also learned from the heroes’ time in Italy that Velma’s fluent in Italian! In this scene, Batman’s the perfect gentleman, as he helps Talia out of the gondola. We also never get to see Talia’s full face because of her hair. This wasn’t the most revolutionary detail, but it was certainly a consistent one!

This was the issue I’ve been waiting for. Finally, we got to see women saving the day! While Talia was also a bit of a damsel in distress, she didn’t seek out her sometimes boyfriend to help her. When Talia first shows up in Gotham City, she’s actually looking for Velma. She even refers to Velma as a detective and corrects Batman when he tries to claim the title. Talia makes a point of validating and complimenting Velma. It’s about time someone did!

Huntress was also a pretty helpful character in this issue. She acted almost like the group’s Velma this time, since the original was so busy crime-solving, that she didn’t have time to fill the group in on background facts. Huntress filled in Scooby and Shaggy most of the times they had questions. She was also a formidable fighter and a great help to Batman in terms of physicality.

Even Daphne had some great moments and was featured more prominently than Fred. The issue heavily featured girl power and made me grin from ear to ear throughout. Another important part of this issue’s feminism was that none of the male characters were threatened or tried to get in the way of the female crime-solvers. Batman was still a necessary part of the issue, as he had certain tech and some excellent jokes. For the most part however, the guys stepped back and let the girls lead the way to the solve!

This issue was far more straightforward than previous instalments, and for that I was glad! Readers got to see the women do what they do best, while still enjoying throwbacks to classic Batman villains. I loved getting to see classic Batman antagonists featured in the issue (they had their own scene and everything!), especially when it turned out that Ra’s Al Ghul wasn’t a helpless old man after all!

The issues in this series that I’ve been enjoying more have been written by Ivan Cohen, so I’m excited to see what other stories he’ll contribute. I’m fine with the Sholly Fisch issues, but I think Cohen is generally more concise with his plots and which characters he decides to include. We’ll see if the trend of my author preference continues!

I’m satisfied that we finally got to see an issue featuring so many female characters. The women were so empowered and we need more of that in the comics world! I’m wondering however, what will happen when Selina Kyle inevitably shows up! Will she also be calling Batman “beloved” or will the Caped Crusader not have the romantic subplot with his other well-known leading lady?

This issue has definitely been my favorite so far to read and review. Maybe this is due to my Velma bias, but I don’t think there’s anything too wrong with that! The issue also led me to feel more curious about Batman’s colleague, Huntress. I think I need to find more comics featuring her in the future! For now though, I’m happy to keep reading The Batman & Scooby-Doo Mysteries.

Fellow readers, what did you think? Please let us know.