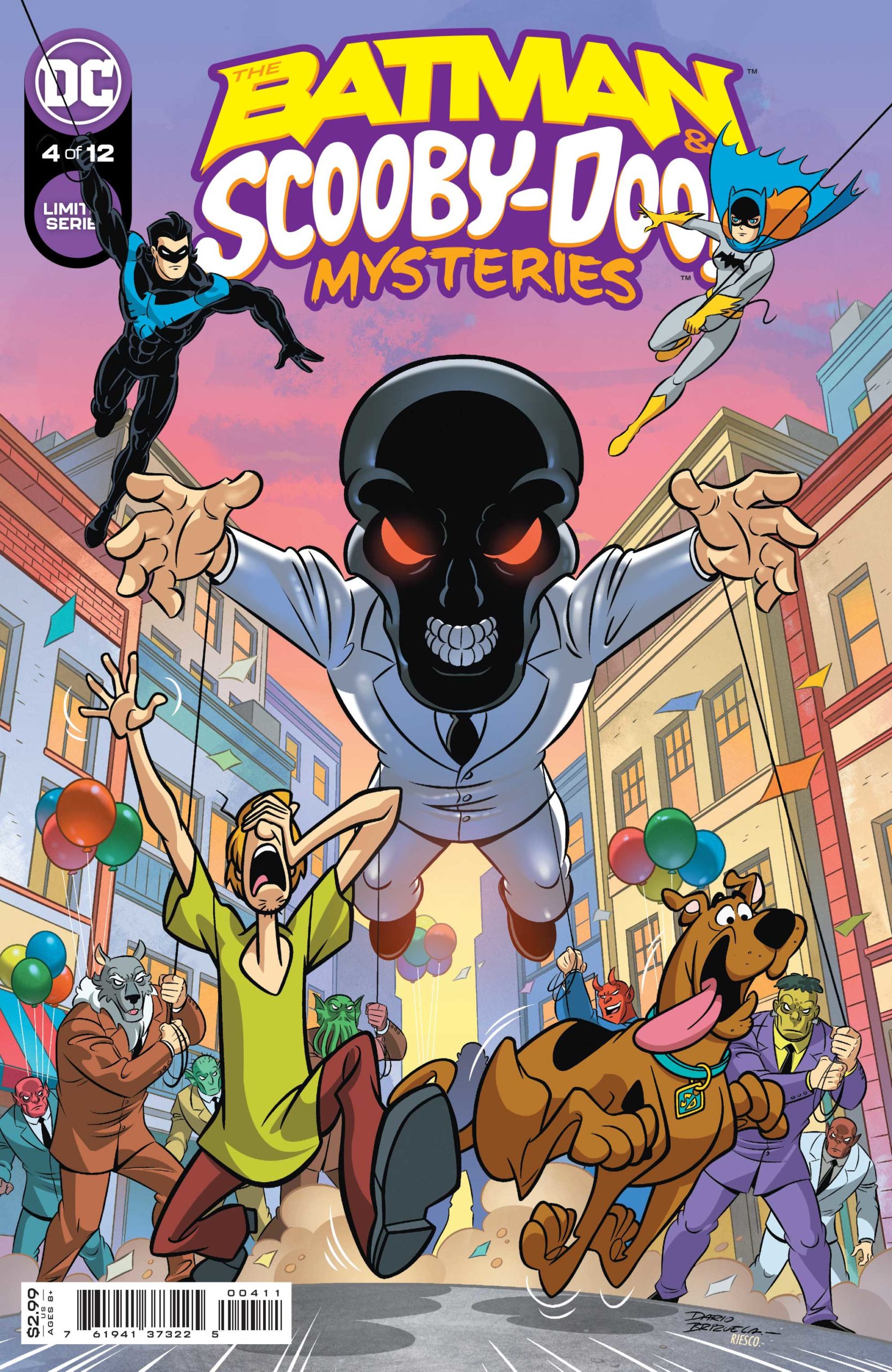 The Batman & Scooby-Doo Mysteries #4 is here! A lot happened in this issue, but what I was most excited to see yet another female crime fighter in these pages. That’s right, Batgirl finally arrived! Additionally, I really had to research to learn more about the villains that appear in this one, as it saw the Bat-team and Mystery Inc. facing off against monster mask wearing gangsters, as well as Black Mask and the False Face Society. So what sort of evil occurs?

You don’t have to read these issues in order, but it is recommended, as it helps to keep up with some of the jokes and character references!

This week’s issue had not only a real parade marching down the streets of Gotham City, but also a multitude of characters to address. Obviously, everyone from the Mystery Gang was present in the issue, but the meddling kids definitely became background characters. Even as the villains’ plan is enacted, Scooby and friends didn’t get to solve any mysteries, and mostly just helped direct civilians to safety. This made for a lackluster outing for the characters for sure.

The antagonists of this issues were also difficult to keep up with. Black Mask was the ultimate villain of the issue, in terms of leading the baddies and formulating the plan. Despite this, he wasn’t even shown in the comic until about two thirds of the way through. There also was no backstory for why he’d decided to disrupt Gotham City’s parade (other than just general evil and greed). Black Mask’s henchmen also left a lot to be desired. Additionally, the Terrible Trio appears but doesn’t make much of an impact (did the Shark’s head confuse anyone else?).

Luckily, this issue is saved in terms of characters, explanations, plot, and sleuthing by Batman’s proteges, Nightwing and Batgirl. Nightwing identifies himself readily and explains that he’s no longer a boy, but a man! He adds on that Batman has a new Robin now (which one could that be?). Mystery Inc. immediately recognizes Batgirl however, and I was so excited to see her on the page! I’ve discussed in previous reviews that I wanted to see more girl-power in this crossover comic, and my wish finally came true. Batgirl did a lot of crime-stopping, which was kick-ass! I’m hoping that Daphne and Velma will also receive that kind of platform in future issues.

The Batman & Scooby-Doo Mysteries #4 also touched on the dynamic between Nightwing and Batgirl, stating very clearly that they’re definitely not dating. Or at least, they’re only dating as much as Daphne and Fred are (which Velma also tries to tease about).

Because this issue featured a parade, there was vibrancy on every page! I was so excited to see the amount of beautiful art in this book. While simple lines mostly, Dario Brizuela really took the time to bring the backgrounds and extra characters to life. My favorite panel of the comic demonstrates this very well. It’s a panel that shows the first image of the parade and that every person in it, even on the sidelines, is different from each other. Each clearly has their own personality and costume, and I was in awe.

I was slightly disappointed however with some of the main characters’ portrayals. All the Bat affiliated characters featured depth and detail, but the Mystery Gang just felt a bit too plain for my taste. I was also a bit sad to see that even though all the characters have cell phones (as we also established in issue #3), the phones of the characters were pretty basic too with no personality ascribed to them. I’m probably being too picky here, but I feel like the Bat-team and even the villains were given quite a bit of drawing effort. It just felt like Mystery Inc. got left behind.

I know I’ve hardly even talked about the plot in this review, but that’s because I honestly found it a bit difficult to keep up with. There were no explanations or backstory for any of the villain’s motivation. It’s not even mentioned why Mystery Inc. are in Gotham City again. The most exposition in the comic is given to Nightwing and his explanations of his new persona. This isn’t a bad thing per se, but it doesn’t really add up with the title and the overall arc of the series.

This issue honestly just felt a bit rushed in places. The pacing wasn’t quite right or maybe it could have been a better story if it had been split into multiple issues? I honestly don’t know. I’m a pretty opinionated reviewer and I recognize that this issue just wasn’t as much my cup of tea… it still might be for someone else though!

The art was fantastic, the colors were popping, and the Bat-team was pretty awesome, but for me, The Batman & Scooby-Doo Mysteries #4 was missing a lot of Scooby-Doo, and it barely had any Batman in there either! This story wasn’t cohesive enough, but hopefully something richer will come up in the next issue.

Anybody else have more positive thoughts to share or pushback on my opinions? I’d genuinely love to hear them.