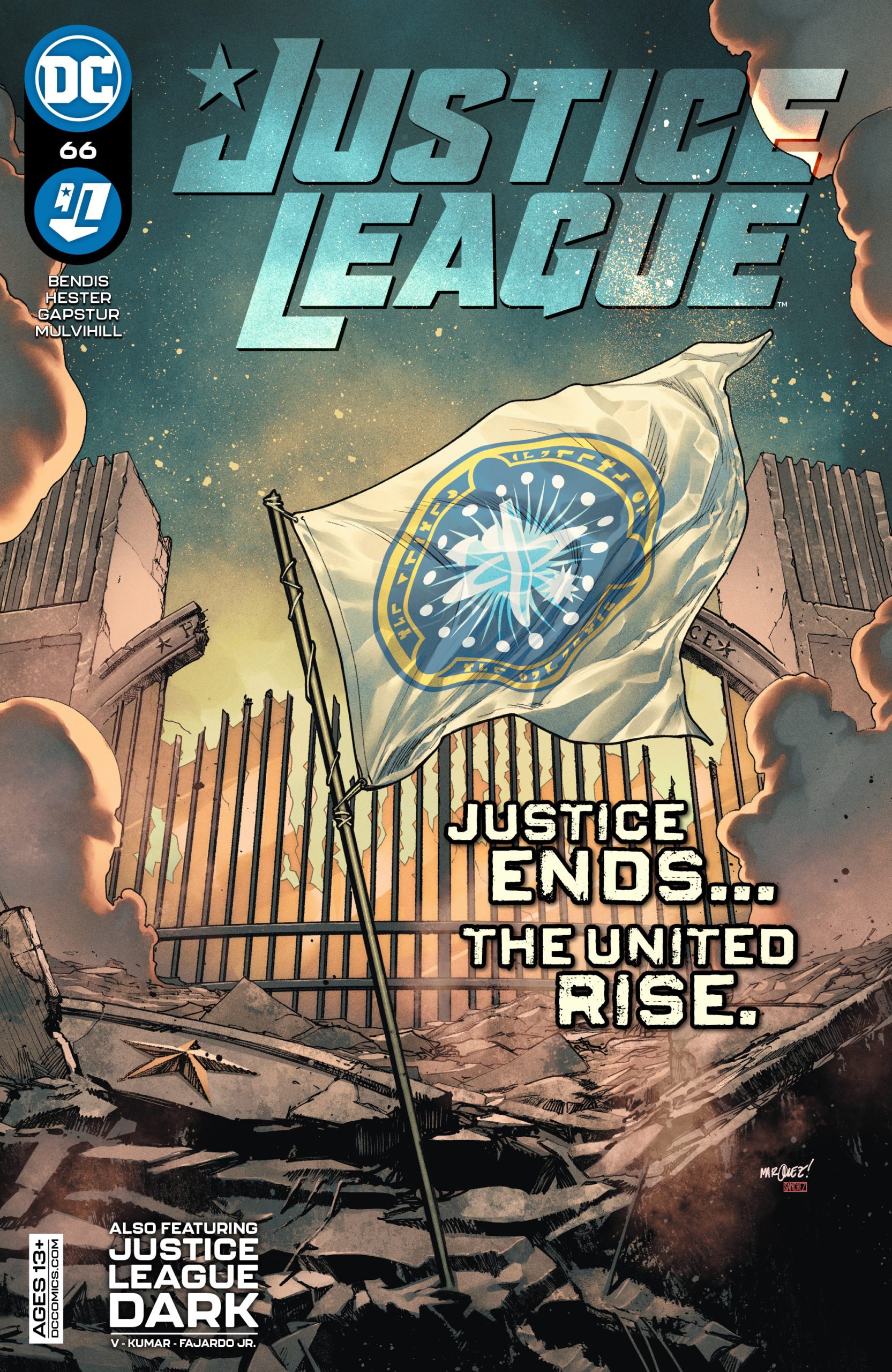 The Hall of Justice lies in ruin, as the League feels the wrath of Synmar Utopica, in this week’s Justice League #66.

Utopica, a cosmic threat with Superman-level powers, has made his way to Earth to finish his grudge match with the Man of Steel. The trouble is, he just so happens to show up while the League is hosting Naomi’s parents at the Hall of Justice. So, while Superman and the rest of the League trade blows with the villain, Naomi’s parents are forced to hide away with John Constantine in The Tower of Fate, which apparently can be accessed via the Hall of Justice through a magical doorway

Oh and by the way – Green Arrow and Black Canary have also been ambushed by a fake Deathstroke and a dude claiming to be Lois Lane’s brother while out on a date.

I want to go on record to say that this issue is not bad. Bendis pens an exciting tale with some excellent punch-em-up moments. However, the issue once again suffers from the dreaded “you’d better have read the rest of Bendis’ DC work” syndrome. Much of the Black Canary and Green Arrow subplot revolves around the Checkmate and Leviathan storyline that Bendis established two years ago with Event Leviathan and Leviathan Dawn, and the Synmar Utopica storyline is a follow-up to Bendis’ work on Superman.

I have mentioned this in a previous review, but it’s worth noting again: unless you’ve done your homework, some of this script will not resonate. For example, there’s a scene where Synmar interacts with his betrothed. Bendis gives the reader just enough information, so they can understand what’s happening, nevertheless, the scene will undoubtedly mean more to those who are more familiar with the Synmar arc from Superman. 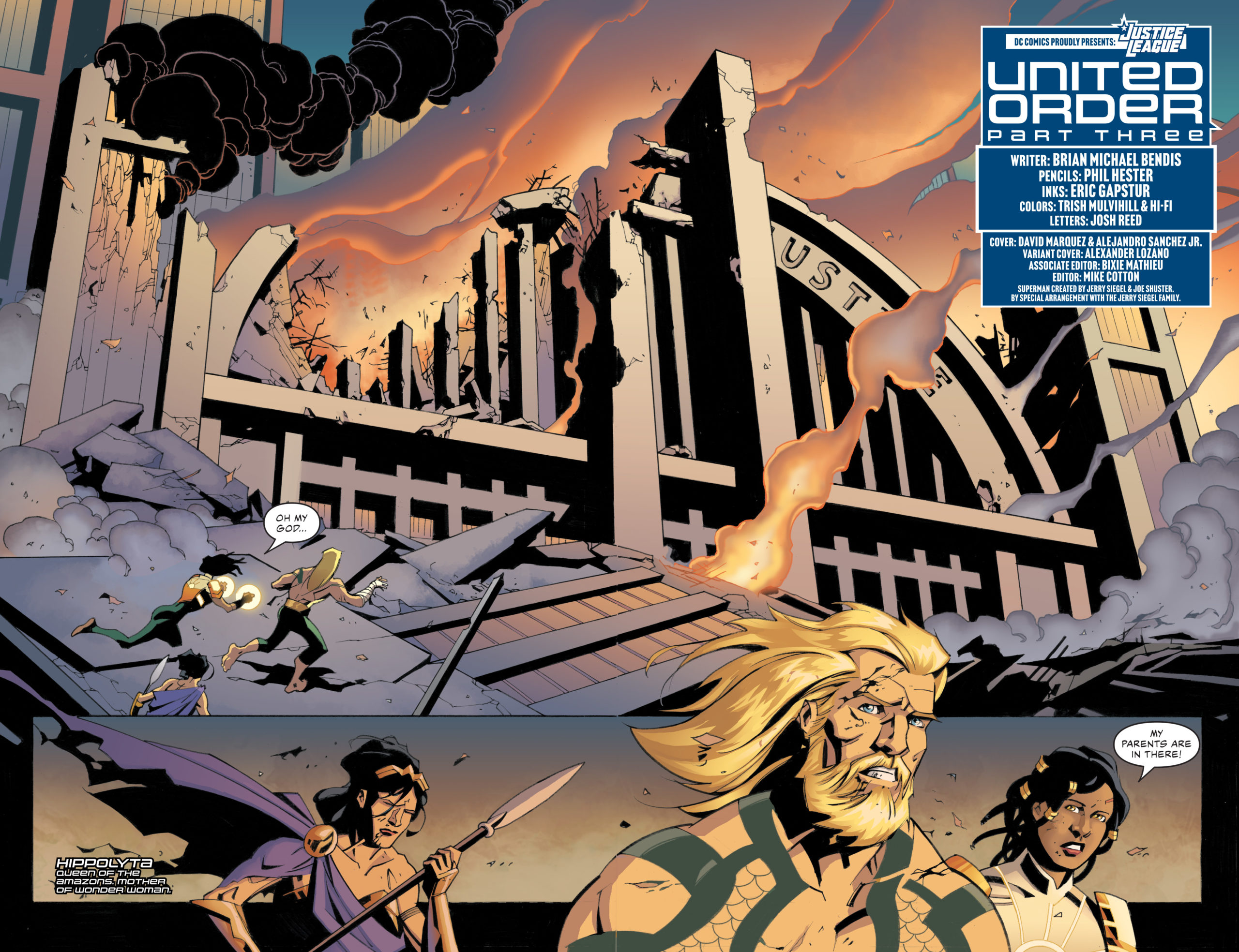 Once again, Justice League has a new art team, which is mildly surprising considering the title is halfway through an arc. Normally, I don’t care for an artistic shake-up in mid-story as it’s often distracting, however, I welcome the change here. Phil Hester is on pencils with Eric Gapstur on inks and Trish Mulvihilljoins Hi-Fi on colors. This team brings a certain contemporary and urban edge to the title that Steve Pugh and team, for me, never quite captured. Hester’s character designs are more angular than Pugh’s, which makes this new aesthetic feel more modern. Also, Hi-Fi and Mulvihill’s colors are phenomenal, as the color pallet for Justice League #66 really pops. The pages are vibrant, dynamic, and wonderful. This current team feels more in line with David Marquez’s aesthetic, from when he was on the title.

Continuing the Merlin storyline that began during “Future State“, Ram V’s latest chapter is focused on Elnara Roshtu, the Thirteenth Knight of the Round Table. Having tracked a Merlin-associated cult called The Brothers of Ambrosus to Gotham, Elnara and Batman stumble upon Randhir Singh: a child who was abducted for his ability to create constructs using his imagination. During his captivity, he was connected to a machine that trapped him within his own mind while significantly aging him. Elnara had to venture into Singh’s mind in order to free him.

Ram V’s backup JLD stories have been great, but they sometimes suffer from pacing issues. The Randhir Singh storyline is incredibly high concept and therefore could have used more space to unpack its ideas; however, Ram V does not have that luxury. In many ways, I feel like a broken record, as I’ve mentioned this problem multiple times. The Randhir Singh story has brought this problem to the forefront, as I foretell that the character will play an incredibly important role in things to come. It feels like this subplot has taken over the story, especially since Ram V also continues to devote a couple of pages to Merlin, which feels somewhat unrelated at this point.

In regard to Justice League #66, I’d like to reiterate my earlier point – Bendis’ story is fun, but it’s going to be a lot more fun for those who know its backstory. A writer returning to his unfinished stories isn’t necessarily a bad thing, and I’m sure there are many readers who are happy about this, particularly with all of the shake-ups that have occurred at DC over the past twelve months. It’s nice to know that all Bendis’ plans weren’t lost in the shuffle. Unfortunately, this approach isn’t particularly friendly for new readers.

As for JLD, DC needs to give up on this backup experiment. It’s not quite working, but for the strangest reason: Ram V’s story is too exceptional for a nine to twelve-page backup. DC needs to reintroduce Justice League Dark as an independent title.

Final Verdict: It’s good, but not without flaws.