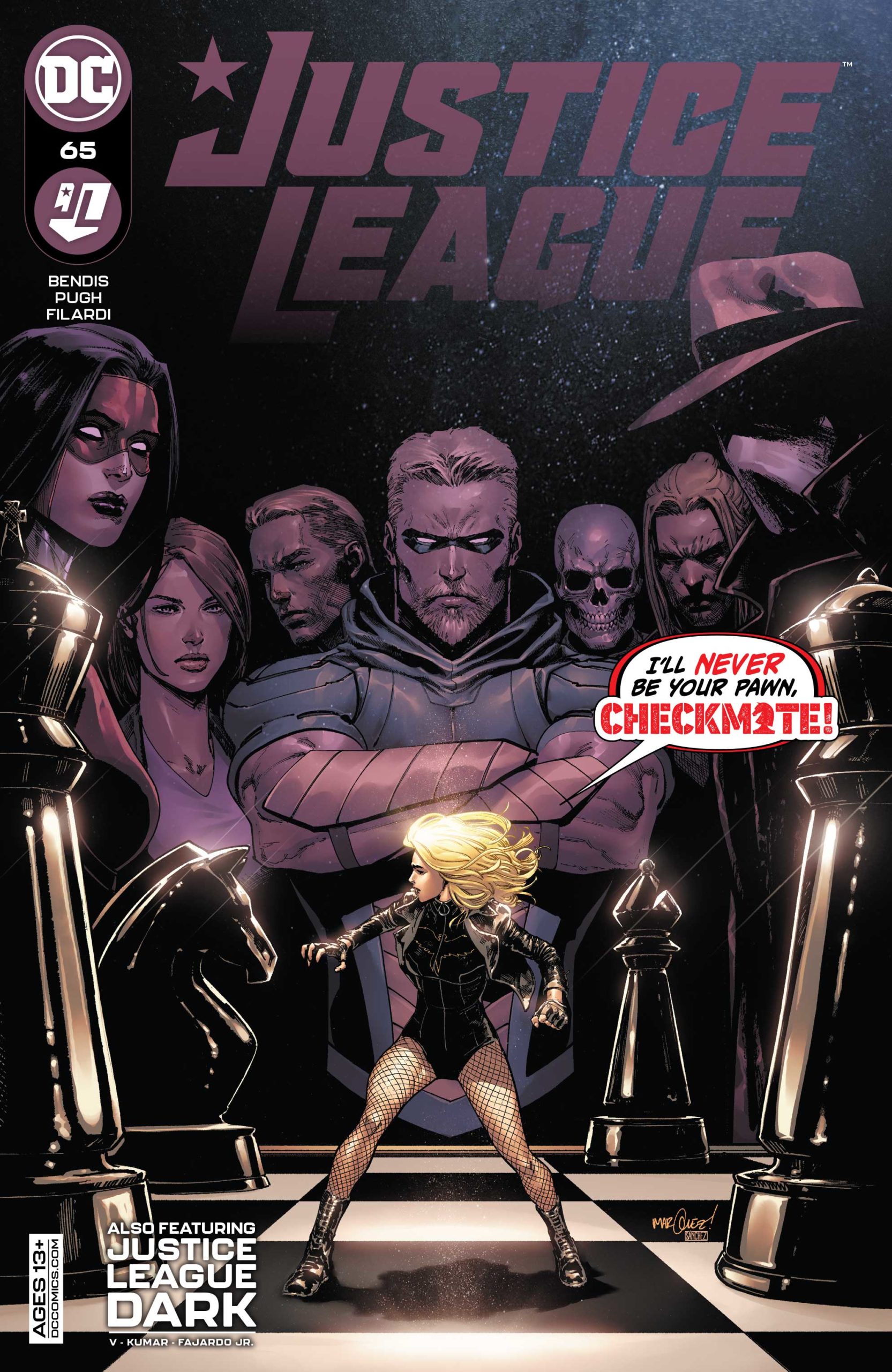 The League plays defense, as an alien threat lays siege to the Hall of Justice in this week’s Justice League #65.

The League is not having a good day. An alien by the name of Synmar Utopica has escaped the custody of the United Planets and made his way to earth. Synmar is as powerful as Superman and has a vendetta to settle with the Man of Steel. Elsewhere, Green Arrow and Black Canary’s date was interrupted by an A.R.G.U.S. spy, but before they can get to the bottom of this mysterious man’s identity, they’re ambushed by a fan-favorite villain.

Bendis Back On Point

Brian Michael Bendis has been using Justice League as a means to tie up plot threads he left dangling in previous titles. Last month’s issue felt slow and disorienting – mostly because I wasn’t completely up-to-date with Bendis’ body of work at DC. After taking the time to set the state, Justice League #65 is much more exciting. Superman’s slug fest with Synmar Utopica is pretty epic. Also, the Black Canary/Green Arrow storyline has a wonderful twist that ties into Bendis’ Checkmate title. Overall, this issue was a major improvement over last month’s. Bendis has found his mojo once again.

For starters, I still miss David Marquez. His work on the first arc of the Bendis tenure on Justice League was fantastic. And frankly, Steve Pugh isn’t David Marquez, unsurprisingly. However, I will say that Pugh really upped his game for this issue. His action sequences are dynamic and well-paced, he does a great job using paneling to capture the intensity of the League’s fight with Synmar Utopica. When drawing down-beats, Pugh’s page layouts are quite traditional, however, when someone starts throwing punches, the artist gets more creative. Essentially, it’s quite apparent that Pugh’s strengths as an artist are in combat sequences, which is probably why last month’s art felt a little flat.

While investigating a cult called The Brothers of Ambrosus, Elnara Roshtu, the Thirteenth Knight of the Round Table, and Batman stumbled upon a man by the name of Randhir Singh, who’s been connected to a machine that, not only brings his dreams to life, but also traps him in his own mind. In Batman’s words, Singh is essentially being used as an “imagination battery”. So Elnara has to venture into Singh’s mind, in an attempt to free him from the dreams that are holding him captive.

Ram V’s imagination is incredibly fertile. Seriously, he seems to have an endless fount of ideas to pull from for this title. The Singh storyline is one part Matrix, one part Inception, and one part DC. It works really well. In fact, Ram has managed to tie this into the Merlin storyline that has been the crux of this backup since it began back in Future State. Bendis might be the headliner for this show, but Ram V is the awesome indie band that opens for the main act. Seriously, JLD is great.

Overall, Justice League #65 is a step in the right direction. Bendis delivers an action-packed script that’s wonderfully illustrated by Pugh. Ram V pens a mind-bending tale that will undoubtedly entertain. It’s good to see that this title’s team is capable of a quick rebound.