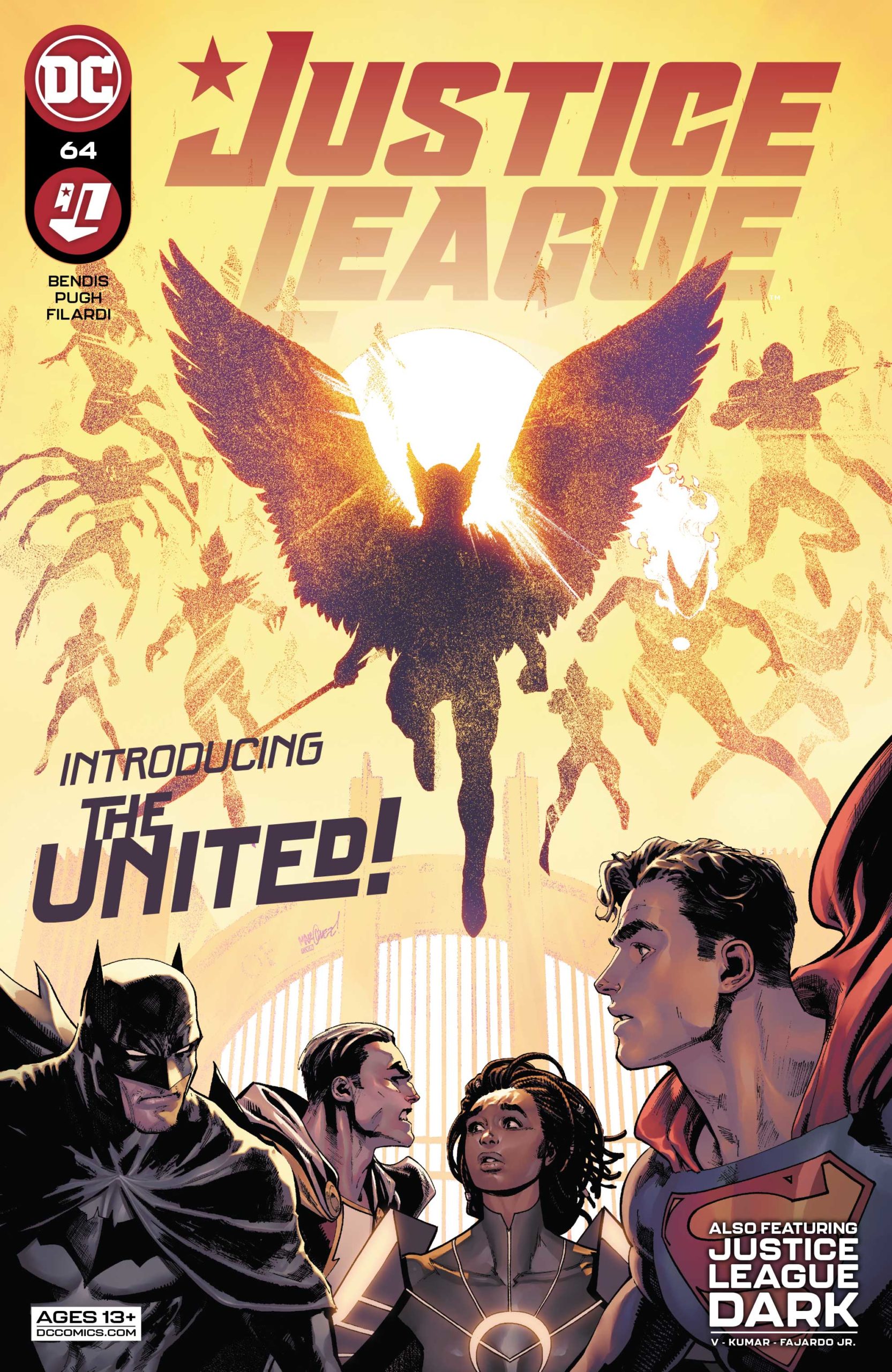 It’s all hands on deck in Justice League #64, as the team braces for the arrival of an alien criminal bent on killing Superman.

Justice League #64 begins a new story arc for Brian Michael Bendis’ tenure on DC’s flagship title. Upon returning from Naomi’s homeworld, the League decides to officially welcome her, Black Adam, and Hypolita into the League. Each of the members jumps in headfirst – especially Naomi, who has found a sparring/training partner in Aquaman.

Meanwhile, Green Arrow and Black Canary decide they needed a romantic getaway, so Oliver takes Dinah to what looks like Coast City’s make-out point. However, while the two heroes are busy throwing googly eyes at each other, a mysterious stranger is tracking their every movement.

Elsewhere in the cosmos, the United Planets governing body is holding a trial for a Synmar Utopica – an alien created by the Synmar Governing Collective to be their own version of Superman. However, instead of a benevolent Sun god with a heart of gold, they ended up creating a villainous sociopathic murderer who now has a mad-on for the Man of Steel. In a not-so-shocking turn of events, Synmar Utopica escapes with the intent of confronting Superman on Earth. Surprise. 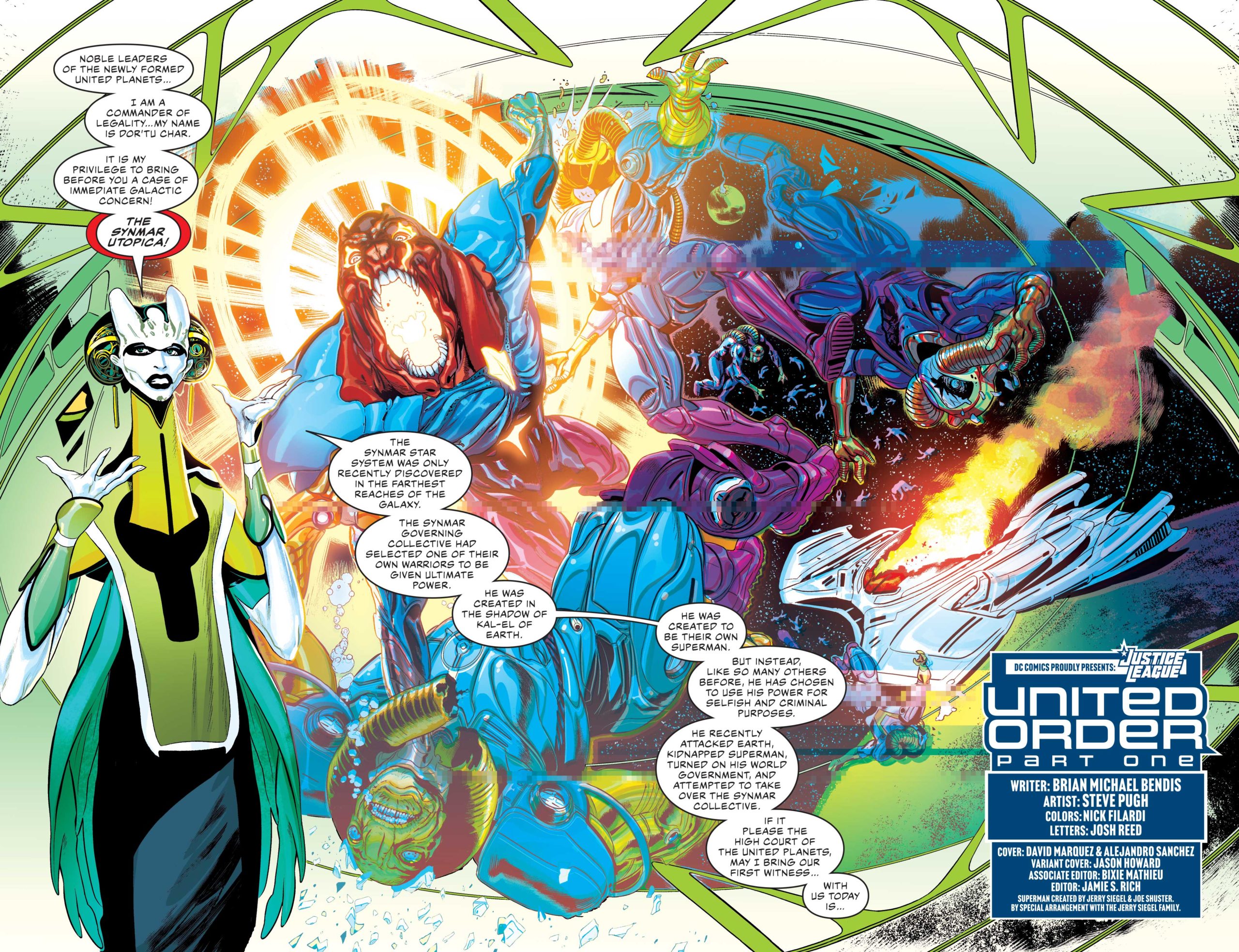 I Think I Missed Something…

When Bendis made his way to DC back in 2018, it was a big deal, and boy did DC let us know it. Not only were we bombarded with adverts announcing DC’s rock-star poach, but DC readers were also suddenly given an onslaught of Bendis penned titles such as Superman, Action Comics, and Legion of Superheroes. He even got his own imprint – Wonder Comics – which included Young Justice and Naomi. On top of all that, he was given his own summer blockbuster: Event Leviathan.

Fast-forward to 2021, and things look a bit different. After some seismic changes at DC, Bendis is now writing only two books (Justice League and Checkmate). Nevertheless, he hasn’t let go of the plot threads established in his earlier titles. The obvious one is Naomi, who has now joined the League. However, in Justice League #64 Bendis reintroduces the United Planets, an interstellar governing body established during Bendis’ stint on Superman. He’s picking up where he left off in Superman by revisiting the villain Synmar Utopica, who was featured in the last arc of his run.

This readdressing of previous storylines is a double-edged sword. For those who have been following Bendis’ DC work, I’m sure it’s nice to know that he plans on finishing what he started. For those who hadn’t been following Bendis, they could easily feel lost. I’m not going to lie – I didn’t read Naomi, nor did I finish his Superman run. So when I began reviewing his Justice League, I wasn’t familiar with the storylines he’s readdressing. Now – mind you – this isn’t my first rodeo. I’ve been reading comics for roughly 15 years now (man – I’m old). I’m able to roll with the punches and muddle my way through unknown plot points. However, for new readers who may have jumped on with Infinite Frontier, they might need to do some homework before picking up this issue. 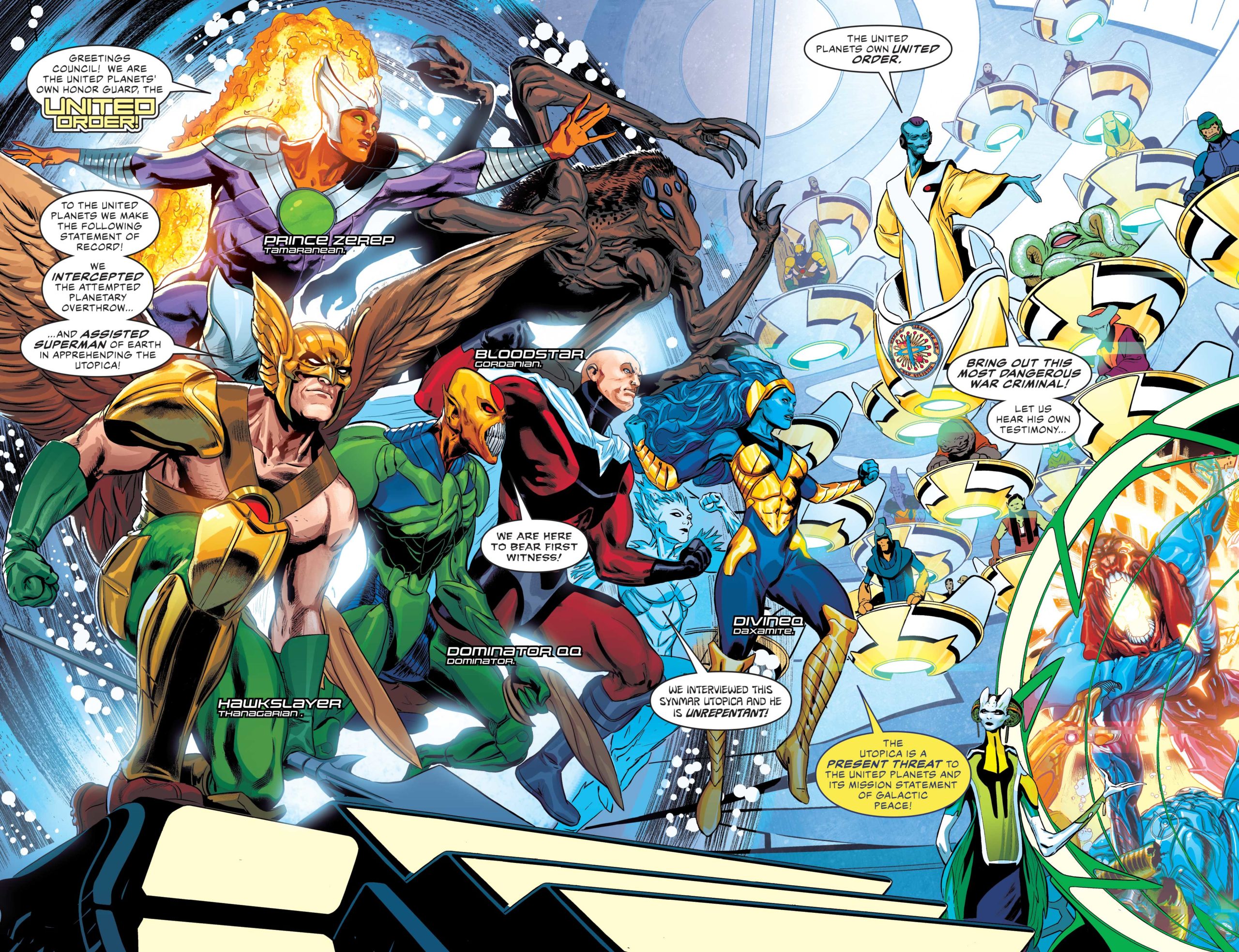 Whatever Happened to David Marquez?

As Justice League #64 begins in a new story arc, it also ushers in a new art team featuring Steve Pugh on pencils. I have to say, I’m kinda disappointed. I’ve been writing reviews for almost three years now (seriously, where does the time go), and over that time, I’ve learned to be more graceful in my reviews. That being said – I’m not a fan of the current art team on Justice League. I really miss David Marquez.

Granted, Marquez is a hard act to follow, as he’s one of the best in the business. However, Pugh’s work is starkly different from Marquez’s aesthetic, so this transition feels abrupt. Marquez’s images are smooth and rounded whereas Pugh’s work is cluttered and noisy. It seems that Pugh will only be around for this arc, so I’m hoping by October Marquez will meander his way back to Justice League.

Elnara Roshtu, the Thirteenth Knight of the Round Table, has made her way to Gotham in hunt of The Brothers of Ambrosus: a cult that has connections of Merlin. Would you believe that Elnara runs into Batman while in his city? Who’da thunk? Anyway, she marvels at Batman and his suit of “armor”. Batman dismisses the Knight and feeds her a BS line about working alone (like how many Robins have there been? Seriously, I’ve lost count).

Overall, the story’s good. The transition is abrupt though from the previous arc, and I imagine that this has a lot to do with the fact that this is a backup story instead of its own title. It’s a crying shame too. Ram V really does a great job with these characters and could really use some extra space to flesh out his ideas.

Overall, Justice League #64 for me was a big bowl of meh. Bendis seems determined to maintain his relevancy by looking back at his previous work, and I found Pugh’s pencils serviceable, at best. Ram V’s story is great, but the poor guy seems handicapped by his page limit. The JLD were literally in maybe four panels, while the bulk of the chapter was devoted to Elnara and Batman.

Final Verdict: It could’ve been worse, but it could also be a whole lot better.

Fans Get to See Naya Rivera In Final Role As Catwoman