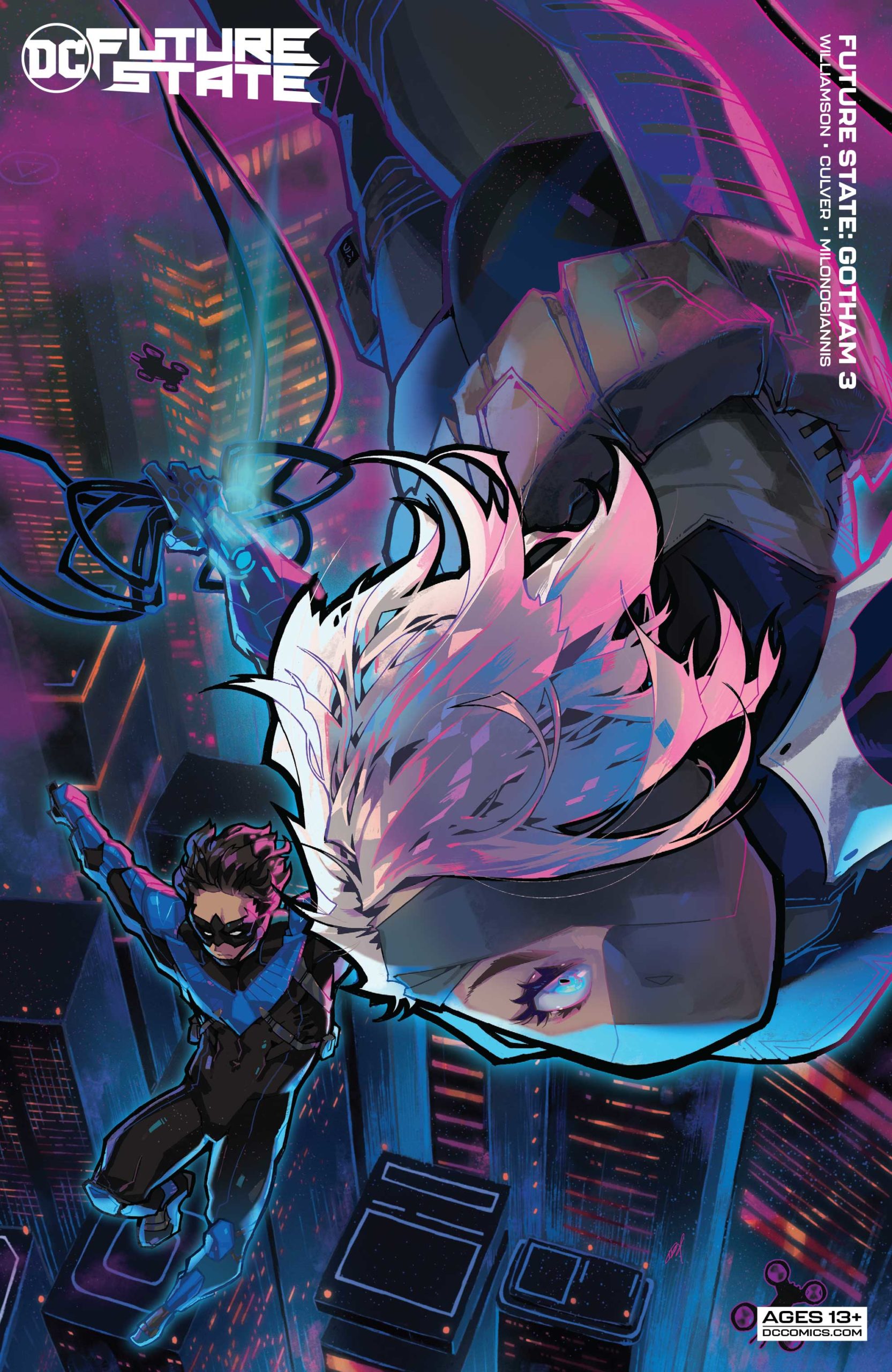 After the way last month’s issue ended, I was so ready to jump into Future State- Gotham #3. The suspense was immense! I just had to know how Red Hood and the new Batman planned on getting out of Arkham alive., and the answer did not disappoint!

The Bat boys’ bread and butter

The amount of trust issues, betrayal, and violence the Bat boys endure is upsetting. I’m talking about their inner family turmoil, and haven’t even touched on what the actual villains get up to! There’s an absolute classic “We can’t trust him anymore” plotline going on in this issue as, no matter what’s happened in the past with the boys, there’s still no trust between them.  Either that or someone is playing a double/triple bluff. I just can’t tell with them anymore.

Joshua Williamson and Dennis Culver are doing a brilliant job at keeping everyone questioning just what in the heck is going on. The banter between Jason and new Batman in this chapter was so great. Any fan of Jason Todd’s loves a good bit of sarcasm.

We get a few answers to our questions in this issue, too. On the other hand, this does sometimes leave me with even more questions. However, still finding himself in a dangerous situation, Red Hood doesn’t really have time to dwell on that! We have some surprise guests in Future State – Gotham #3 as well. I don’t know about anyone else but I am super psyched to have the here. I can’t wait to see how the change the plotline going forward. 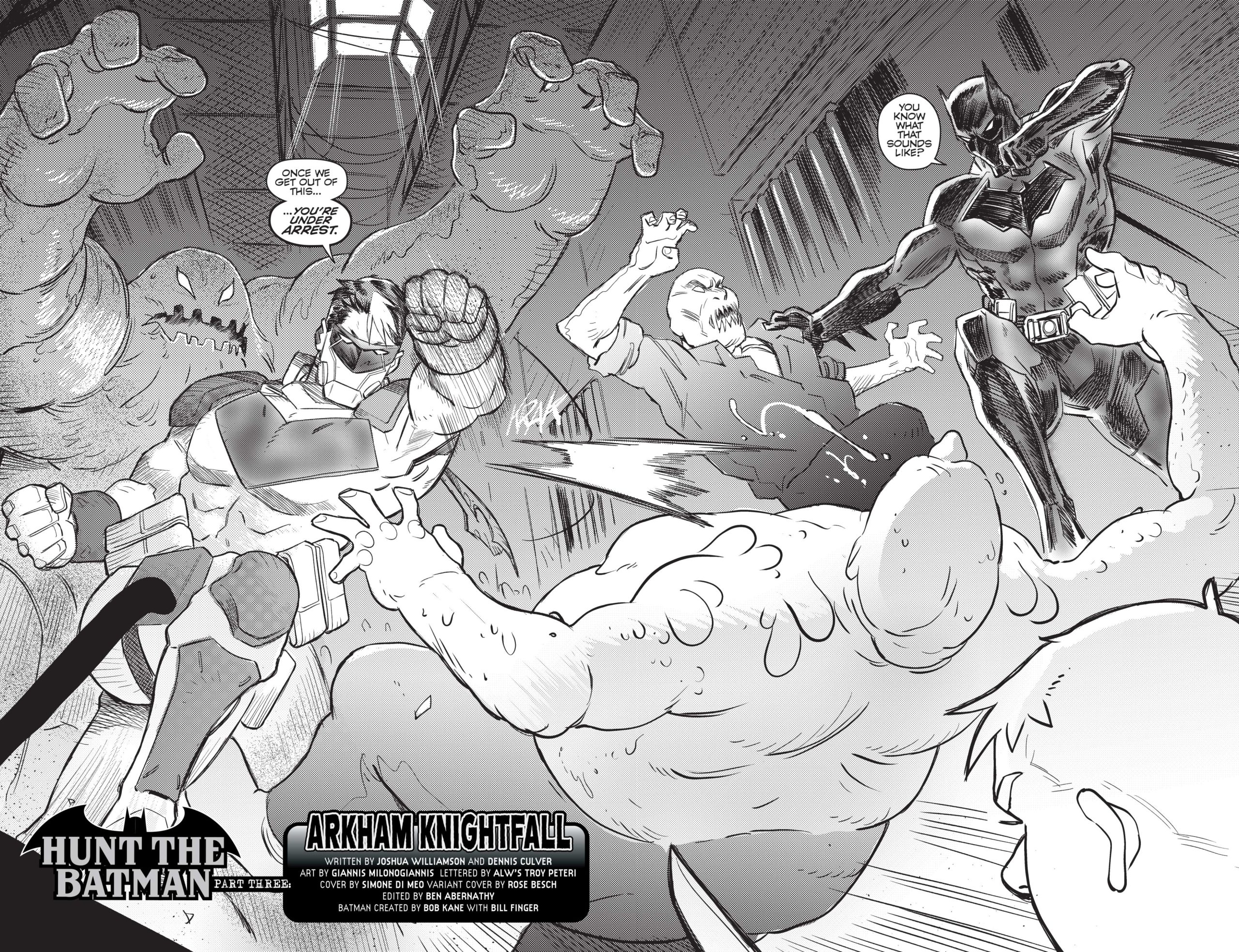 Falling for an artist has never been so easy

Much like Jason Todd, I am falling for this artist. The talent Giannis Milonogiannis has is ridiculous. It might take you a while to get used to the purely monochrome artwork, after seeing so many comics vibrant and colorful. Trust me though, you will start to fall in love with it.

I was very worried at the start of this series that I wasn’t going to get along with the artwork, because I’m so used to color, but I’m very glad to have been proven wrong. There’s something about Milonogiannis’ work that lends itself to the atmosphere, and creates a beautiful, visual story. The line work is amazing, and Giannis really uses shading to emphasize his work.

A Punchline has never been so illuminating

We also get a fantastic short story at the end of Future State – Gotham #3. I adore Rob Haynes block black and white artwork in Punchline. It’s very campy, and visually funny, so we get to see a lighter side, that might be missing a bit from this grim, dark future. I loved this little end strip the most out of the three we’ve had so far. It was very well executed, and not a word needed to be spoken by the characters to get the point or joke across.

This series is intriguing, and it’s slowly drip feeding us information to keep us coming back for more. This is a fantastic way to keep readers interested. I cannot wait to see what Peacekeeper Red, as Jason is now known, does next.

We have, like always, left him in a bit of a precarious position. That ending, though! Just… WOW. Tha’s an immediate “GIMME!” for the next issue, as in gimme it now, please!