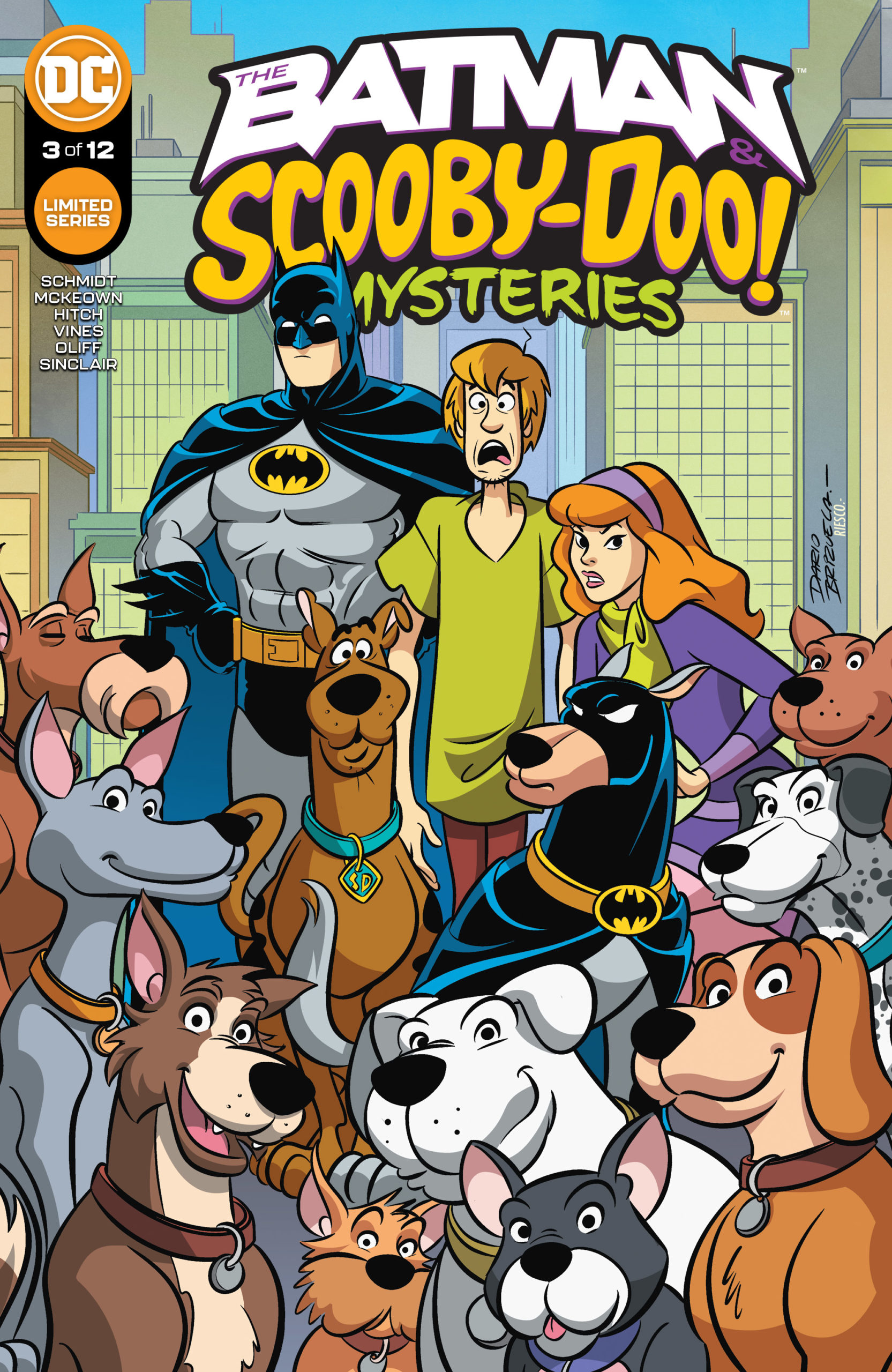 The Batman & Scooby-Doo Mysteries #3 has arrived, and it’s double the dogs for double the fun! In previous chapters, we’ve seen Batman and two of his teammates work together with Mystery Inc. In this issue, Batman’s team consists of himself, Ace the Bat Hound, and Commissioner Jim Gordon! This issue also introduced Harvey Dent to the crossover universe, as well as establishes the time in which the comic series takes place.

This issue has a lot to unpack from the story, so let’s dive right in. Don’t read on if you missed issue #2!

Despite many of the characters retaining some of their original costumes from previous cartoons or comics, the time in which this story takes place is cemented in this issue. Not only are some characters asked to take selfies with civilians, Daphne receives a text message from Batman. Despite the characters’ dated clothing, we’re definitely in the 21st century! While this artistic choice still leaves the characters incredibly recognizable, I wish there’d been more creativity involved in deciding the wardrobes of our favorite vigilante and meddling kids.

This issue was unusual because Mystery Inc. was featured, but half the gang was missing for the majority of the story. Daphne explains to Batman and Ace that Velma and Fred are off in Louisiana of all places, trying to stop a swamp monster (possible Swamp-Thing appearance in later issues?). This personally left me with a lot more questions than answers. While the group’s temporary split made sense for balancing the characters at the beginning of the story, it still felt pretty unusual.

Speaking of split teams, this issue also featured a fair amount of time where Shaggy and Scooby solved crimes separately! What a strange moment that was (and the beloved duo were just as unhappy about this turn of events as I was).

Getting to see more familiar Batman characters, hero and villain alike, was pretty exciting. Ace the Bat Hound is incredibly helpful, and he and Scooby appear to become fast friends, with great influence on each other! We’ll see if any of that carries over into future issues. It was also nice to see Commissioner Gordon in this universe. He played an essential role in saving the day, which was a lot of fun. Plus, seeing him standing beside the Bat Signal in any context always fills my heart with joy!

The main plot does feel very convoluted in places. The story starts with a crime that’s seemingly unrelated to the overall plot. It’s incredibly unclear why this month’s featured villain’s co-conspirators are motivated to help him. Also, even the reason that’s eventually come up with for why the bad guy specifically wants what he does is kind of silly, if not outright ridiculous.

This issue seemed like it was trying to pack a lot into a limited page amount. While I was entertained, some bits of the story were a bit boring.

However, there’s a sequence in which Daphne, Shaggy, and Ace all work together, and the transitions between frames made the scene come alive. It felt like it was straight out of an actual cartoon! Plus, lots of dogs will always make me happy. At the end though, I still felt like there was something missing from this issue.

The Batman & Scooby-Doo Mysteries #3 is a fun read, so I’m still excited to see more. I really hope that we can get something a little different, or at least that we eventually see things we haven’t before, in previous iterations of these crime fighters. A Batgirl and Velma team up? Bruce Wayne and/or Batman takes Daphne out on a date? Fred and Robin talk accessories? I don’t know what we’ll get, but my fingers are crossed for the next issue.

(By the way, did anybody else catch that little Easter egg call-back to the previous issue?)