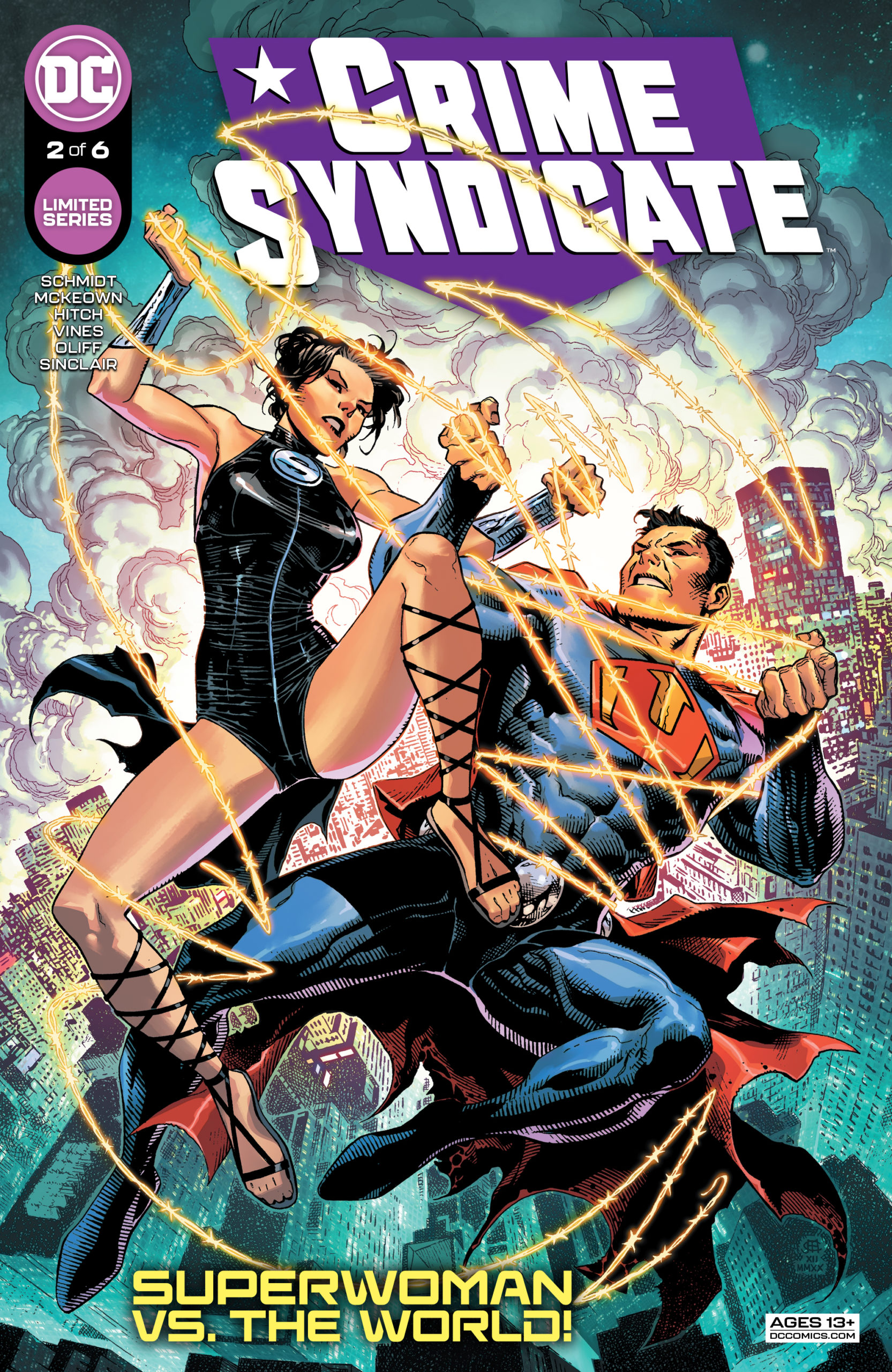 The malevolent makers of mayhem are back to cause more trouble! After last month’s introduction to the team, with a special focus on Ultraman, Crime Syndicate #2 picks up almost immediately where last month’s issue left off. This month highlights Owlman, but that doesn’t take away from the rest of the team. With most of the series setup taken care of last month, there’s nothing in the way of telling a great story with this issue.

I love the opening scene in Crime Syndicate #2. I’m not sure if the creators are paying homage to The Dark Knight Returns, but it’s the vibe I get from it. While this issue does give a glimpse into Owlman’s violent side, it also showcases him as a great detective. Like his Earth-0 counterpart, Thomas Wayne, Jr. uses his brain as much as his brawn. He is, to borrow from the final page, the man with the plan at all times.

We see glimpses of the rest of the team, but when we’re not with Owlman; we’re mostly with Superwoman and a possessed Ultraman. It’s an action-packed B-story the gives us a better glimpse at who Donna Troy is on this Earth, while showing how little regard to human life these characters have. While most readers may know what’s going on with the invasion, Superwoman’s able to drop some exposition that doesn’t feel out of place.

While I loved the art from last month’s issue, Kieran McKeown and Dexter Vines were able to delve even further in Crime Syndicate #2. I didn’t notice last time, but when comparing the two issues there were certain contortions in #1 that felt off. Here, our characters seem more natural, and the story that they’re telling (or enforcing) with the background work? Oh… it’s really good. McKeown and Vines, coupled with Steve Oliff’s colors, are giving me so many reasons to simultaneously hate and love the Crime Syndicate. 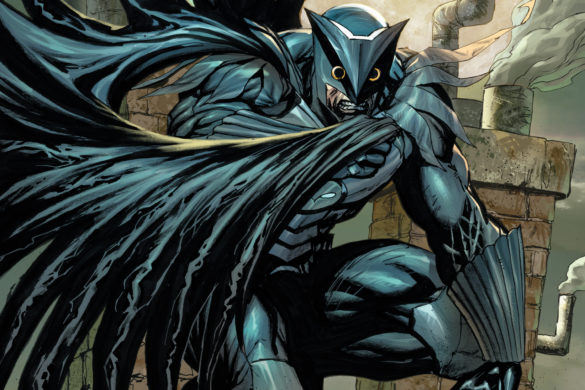 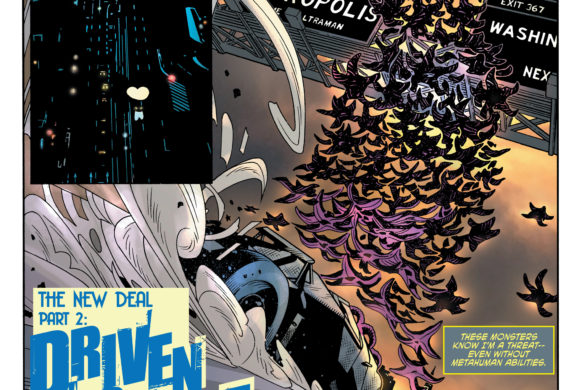 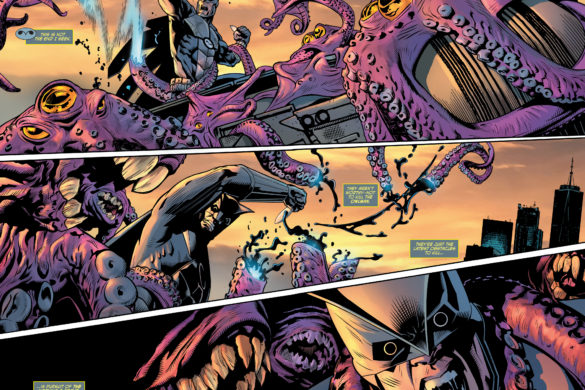 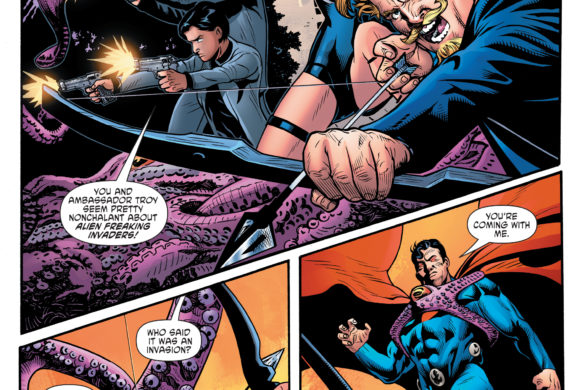 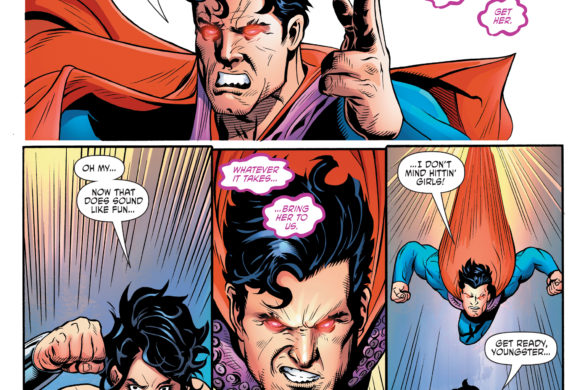 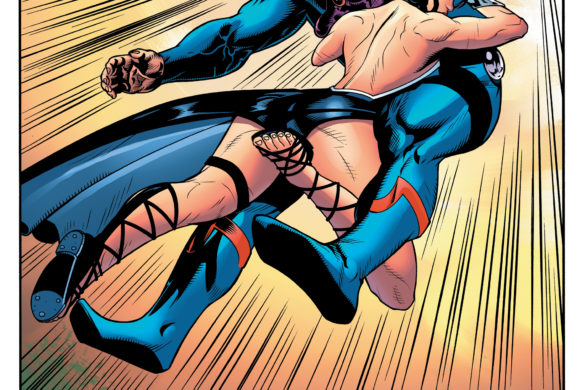 “An Owl in the Light”

Crime Syndicate #2’s backup story brings us to the origin of Owlman. It’s a twist on a familiar tale: the Waynes are murdered in Crime Alley. What’s interesting here is that, for the most part, it seems like Thomas Wayne Jr. was very much on the same path as Bruce Wayne’s path to Batman. Perhaps a little bit more violent, but the end game was justice. Last month’s backup story, “The Paranoid Titan”, improved the main story, but “An Owl in the Light” doesn’t do that, but it doesn’t need to either.

Its success is in showing us how Owlman turned from vigilante seeking justice, to vigilante seeking execution. Last month showed us that Clark likely became the way he is as Ultraman because of how he was raised. For Thomas, we get the same and more. He’s raised as Bruce was on Earth-0, but it’s the truth about the Earth-3 versions of Thomas and Martha Wayne that breaks him.

Bryan Hitch once again crushes these backup tales. He takes everything from the main story, and elevates it. I’m in love with his work here… perhaps it’s because Hitch is more comfortable with darker tones. He knocked the night scene from The Paranoid Titan out of the park, and then got to play in Gotham, where it seems to be forever night. I’d love to see an ongoing series of Owlman with Hitch as the artist, as his work on the costume is far superior to the version we see on the pages of the lead story. In a world where we likely won’t get something like that, send Hitch over to Batman when it’s time for a new creative team; he can work alongside Andy Schmidt.

Schmidt once again helms both stories in Crime Syndicate #2, and as much as I loved his work with Ultraman, it’s even better with Owlman. He delivers a perfect 10 in this issue, even if he ends the main story with a hint of cheese coming from the protagonist. A Schmidt/Hitch ongoing Batman or Owlman series would no doubt be a hit.

Crime Syndicate #2 takes everything the first issue did so well, and improves upon it. While this was an Owlman issue, it never felt like it; unlike last month’s Ultraman-centric issue. This is a fun story with evil takes on our favorite heroes, and its landing. The tease of the importance of John Stewart, the Emerald Knights, and the ring is extremely exciting, and remains what I’m looking forward to the most out of this series.