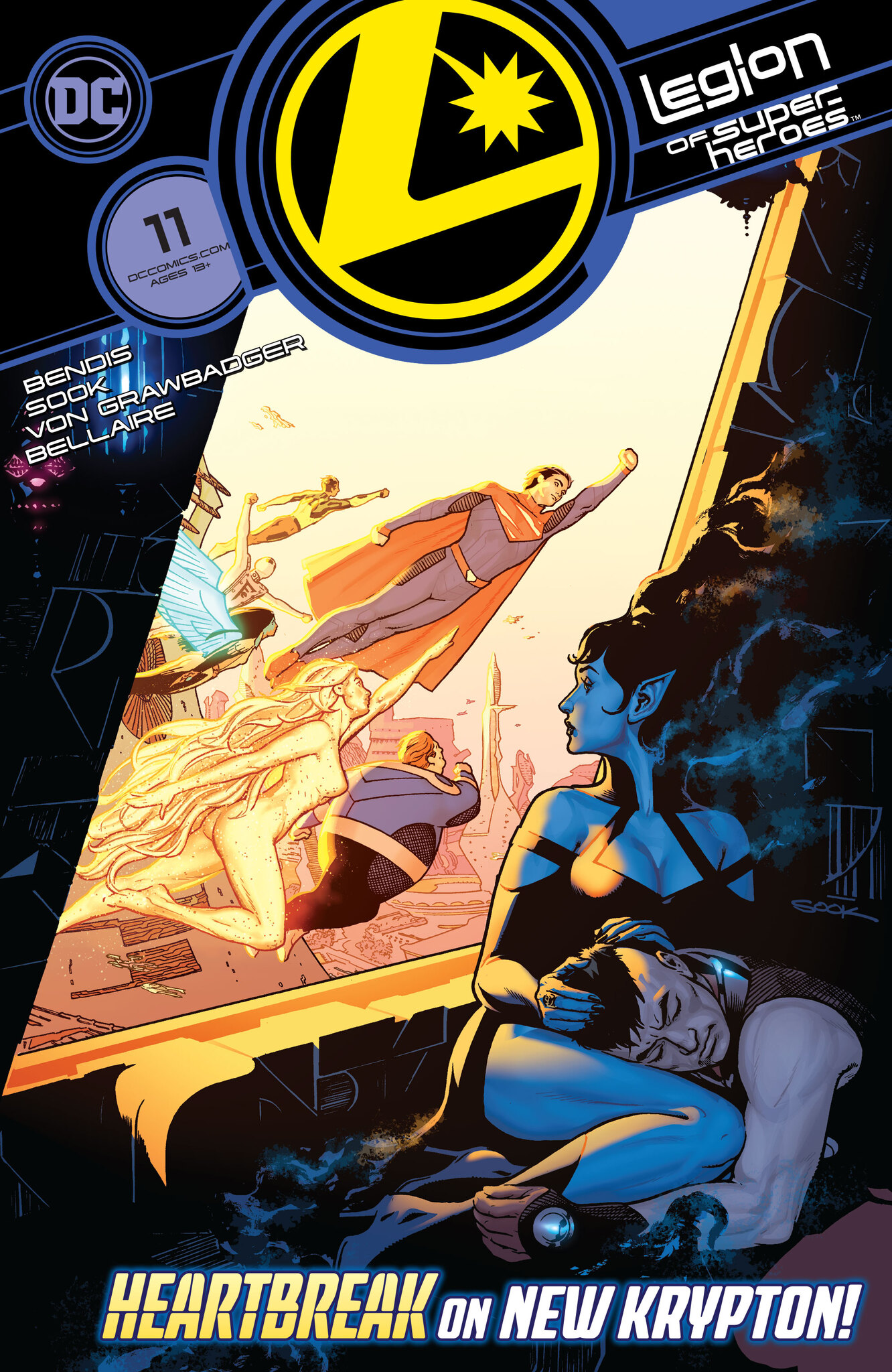 Welcome to the 31st century and Legion of Super-Heroes #11!

For a thousand years, the planet Krypton has been rebuilding itself, and the House of Zod has kept the legacy of Krypton alive throughout the galaxy. For a thousand years, the capital city of Kandor, home of the hero known as Mon-El, has been a beacon of hope across the universe. However, the shocking news that Superboy has come to live in the 31st century with the Legion of Super-Heroes has awoken Krypton’s greatest foe! How can the Legion of Super-Heroes stop the destruction of New Krypton?

Plus, delve into the mystery behind Gold Lantern!

Finally Bendis breaks his formula of presenting the story… well, sort of.

Ryan Sook delivers some of his best art, as the change of scenery reminds one of a Guardians of the Galaxy movie. The scene changes from planet to planet work really well, as you see the legends “New Krypton”, “Rimbor”, “Earth”…. displayed at the top of each page. This a continuation of a precedent set last issue, and it works as a perfect segue, as we follow the Legion from planet to planet. 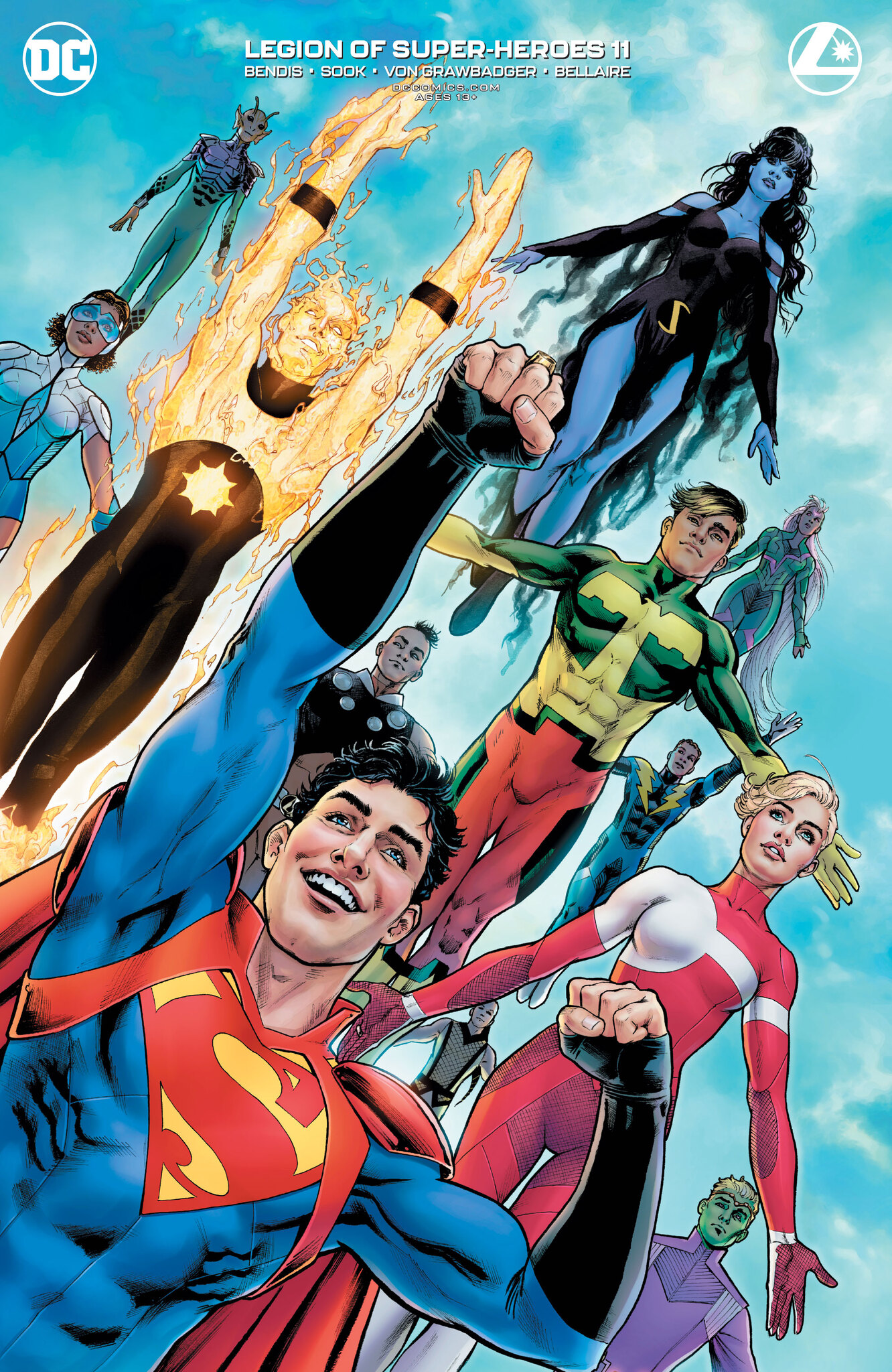 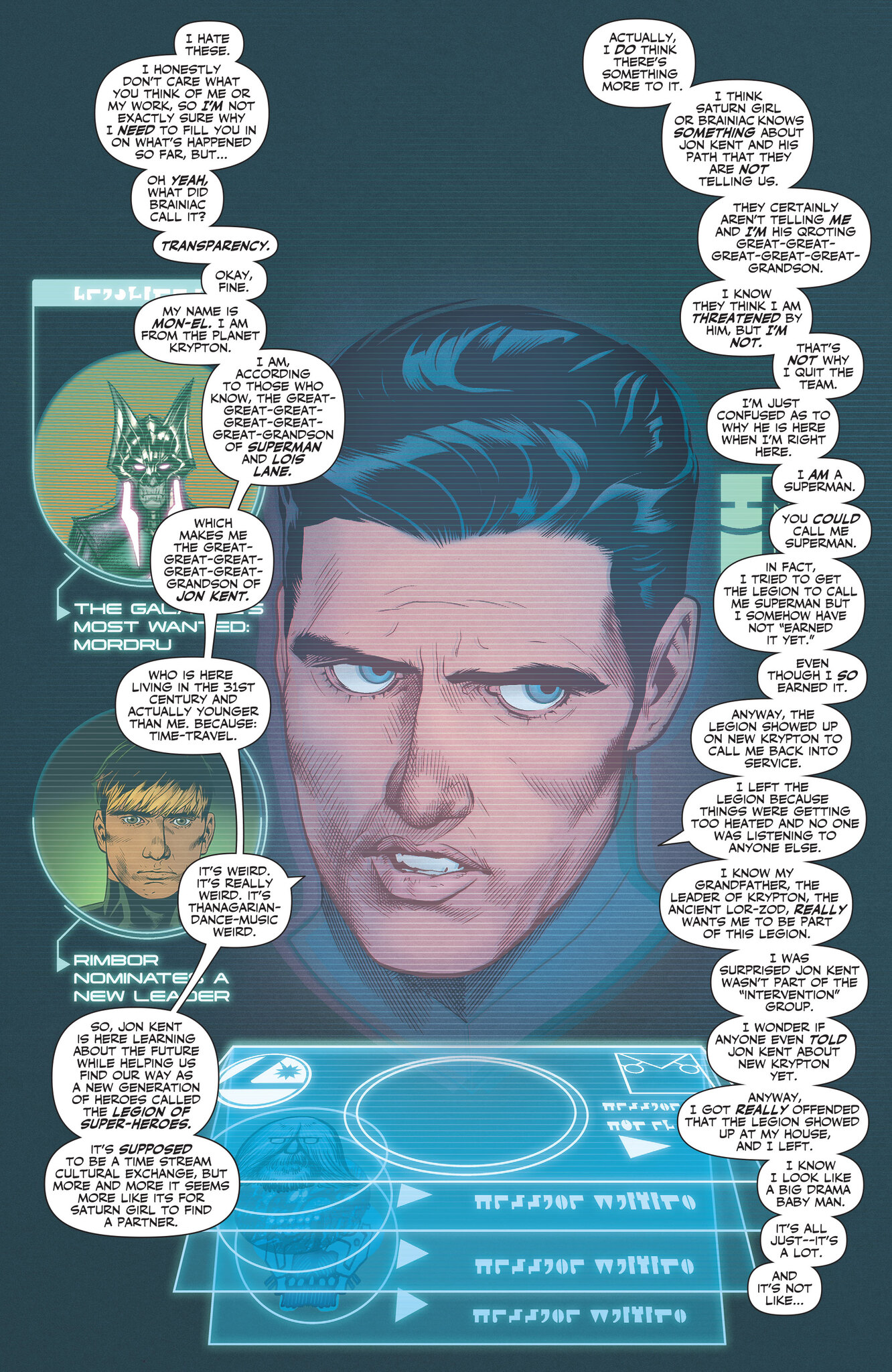 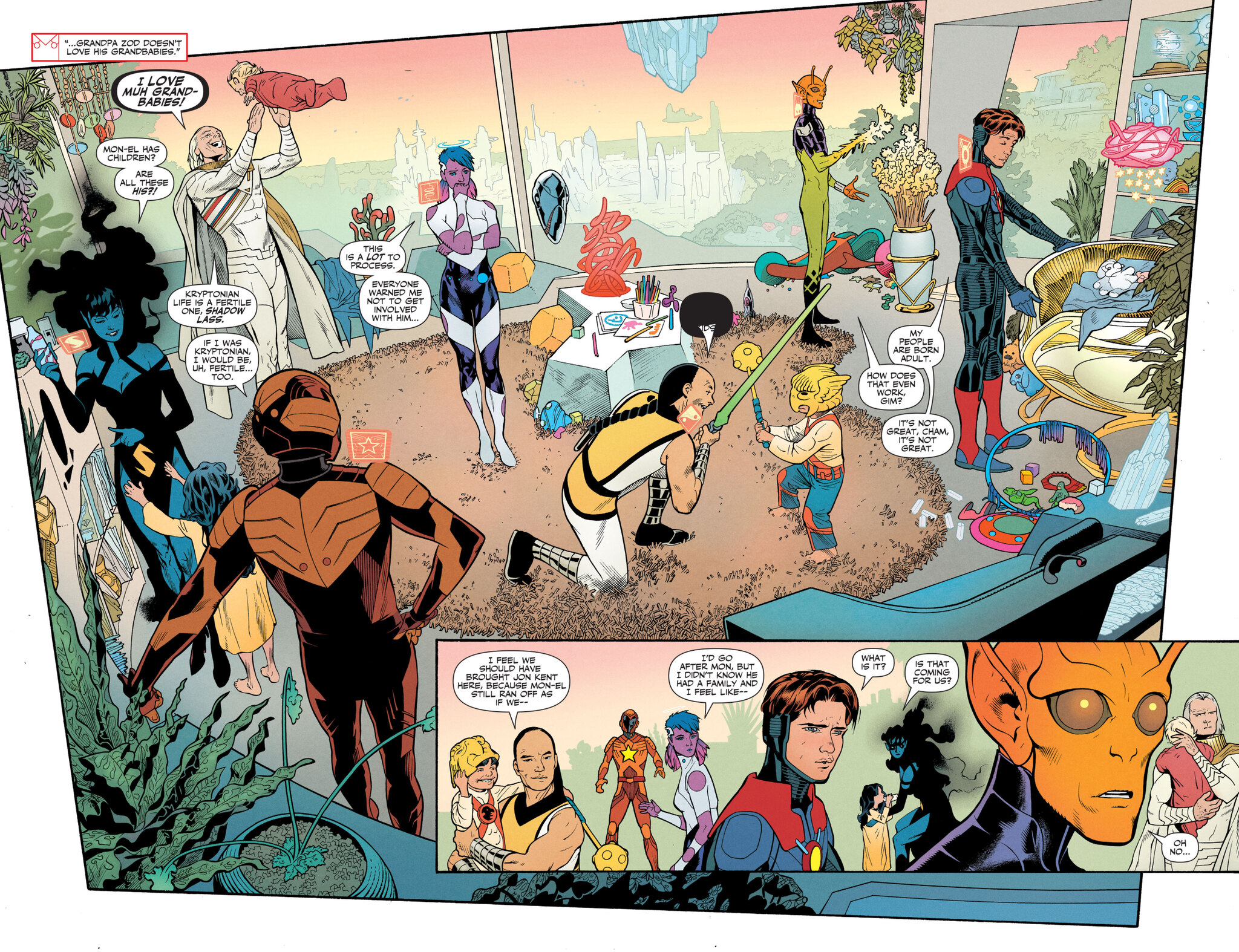 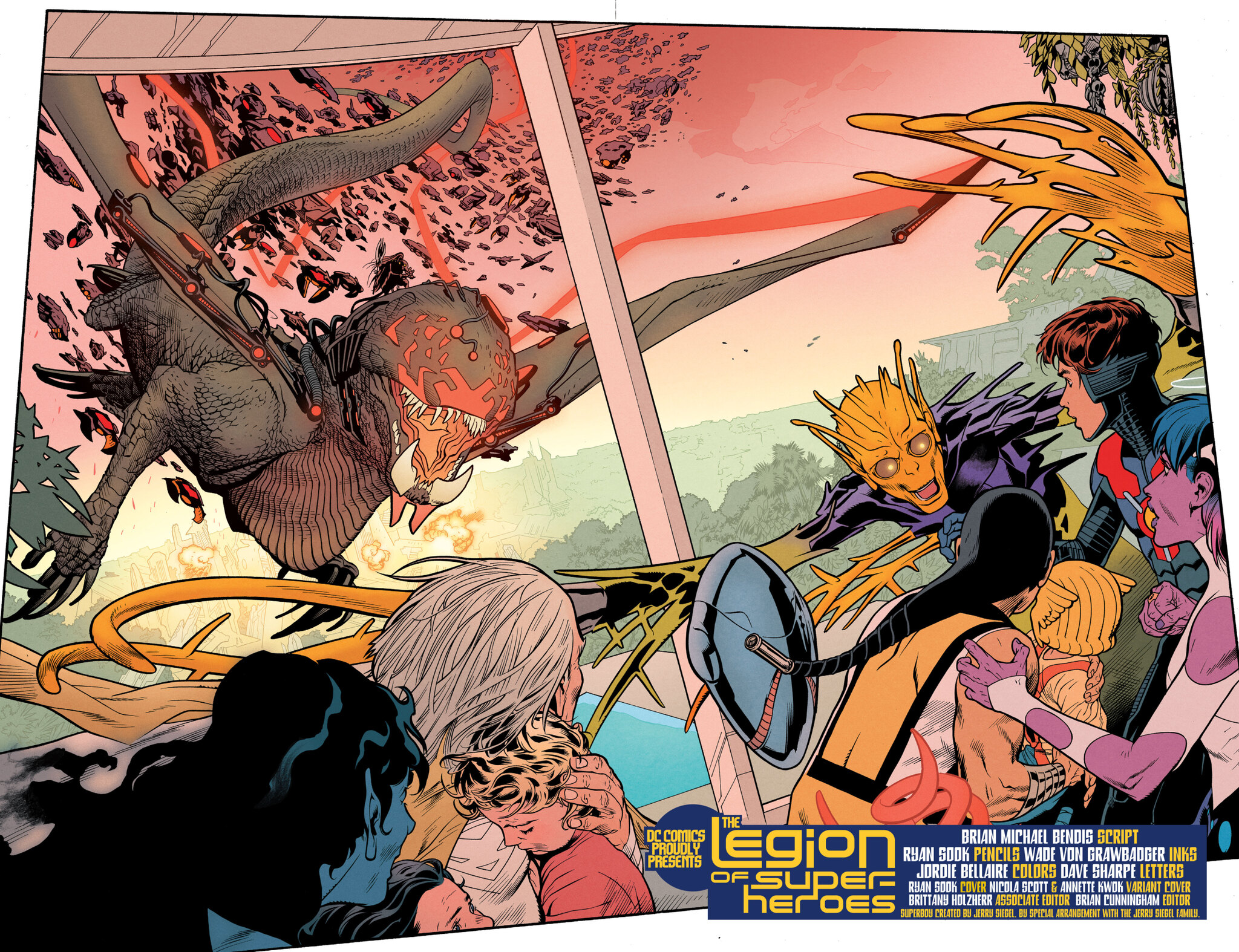 Bless me Grandfather, For I am Not You

Confessional page… that seems to be a staple formula for Bendis and crew, as the story begins with Mon-El reminding each of us that Jon Kent is his great to the sixth power grandfather. Bendis is really drawing out why Mon-El’s so resentful of Jon, and his current title of Superman. I guess the altruism of the blood line ran out.

Speaking of having Bendis on Jon Kent writing duties, check out Action #1027. I’ve never seen such a team up between members of the “House of El”, but I’ve also never seen a Superman daydream destroying a building, nor how brutal he is in delivering an ultimatum to a villain. Bendis may be tainting Clark’s Boy Scout title!

Kala Lour/The Gold Lantern here.. Superboy there… all the Legionnaires are scattered far and wide, to the point where each issue really needs to be double the size it actually is. Right when you get into aspects of the story, you turn the page to another locale and another storyline.  With a cast this huge, it appears to be necessary, but is it?

Bendis is nibbling at the edges of legend and lore with the Legion and the entire Superman family.  Some may enjoy what he’s doing, but it’s all showing Superman, Superboy and the entire House of El in a darker light.

I’m not even a big fan of Jor-El coming back, and how dark he was when he did. Superman isn’t meant to be dark, like Batman. Superboy should be a beacon of light, and – as the character does cast a huge shadow – Mon-El should probably be written with some humility. This isn’t a Star Wars movie, could somebody please tell Bendis!

These issues are starting to wear thin. Change a picture here, load stilted dialogue there. Last issue I had hope, but this issue… not so much!