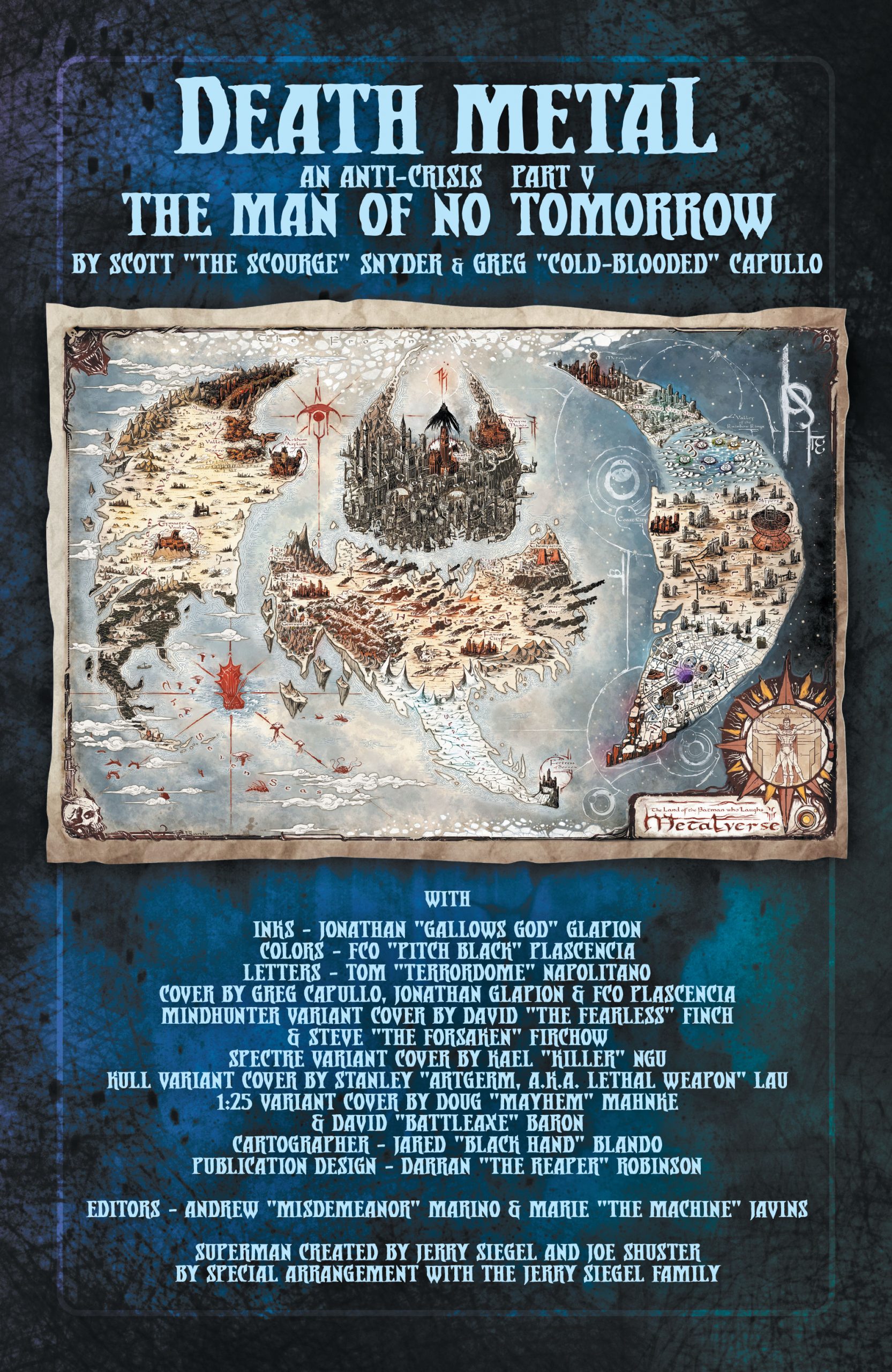 Dark Nights: Death Metal #5 has changed the game. I’ve frequently used phrases like “brilliantly bonkers”, “shenanigans”, and “insanity” to describe this series, but this issue was one of the most thoughtful, and thought provoking, comics I’ve read in a long, long time.

Don’t get me wrong, there’s still a veritable truckload of chaos and carnage to be found in these pages, as the beautiful preview art below clearly demonstrates, but what this issue has at its core – which is something some naysayers have said that this story has been lacking – is heart.

We have cosmic powered villains, universes shattering stakes, and colorful characters aplenty, but Dark Nights: Death Metal #5 looks at the souls of them all, shining a light on what makes them great now, and what always has. I’ve been saying for decades that Scott Snyder clearly loves comics. Never has this been more obvious.

Superman seeks to pull out the best in us. Batman seeks to curb the worst. You… seek the truth. In this final war, the truth is the metal by which we will live or die.

In a few short sentences, Scott Snyder has given us the essence of the three mainstays; the backbone, the originals, the world’s greatest superheroes. DC’s Trinity. The characters from whom everything else flowed, and followed. Thank you, Scott. 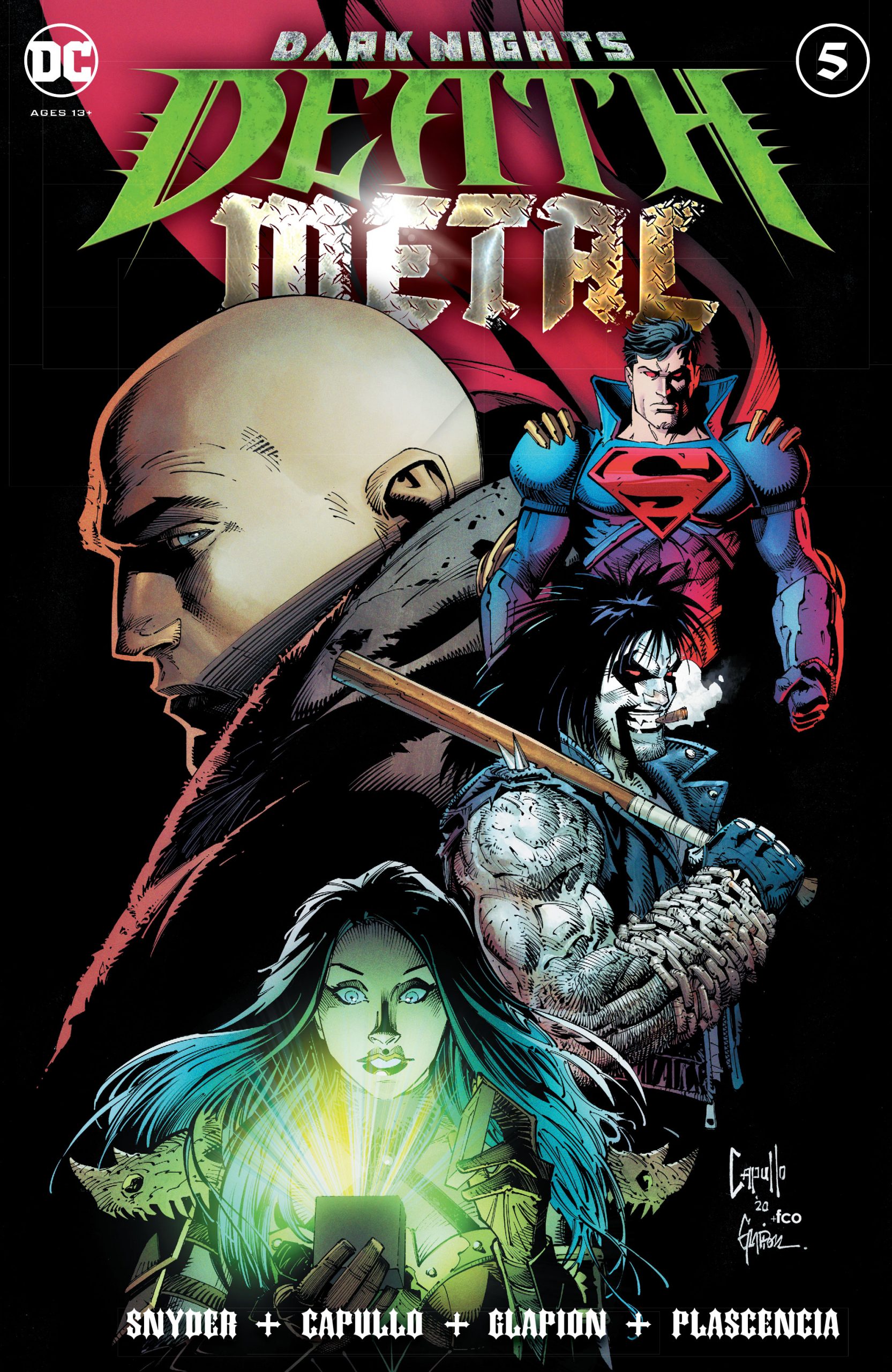 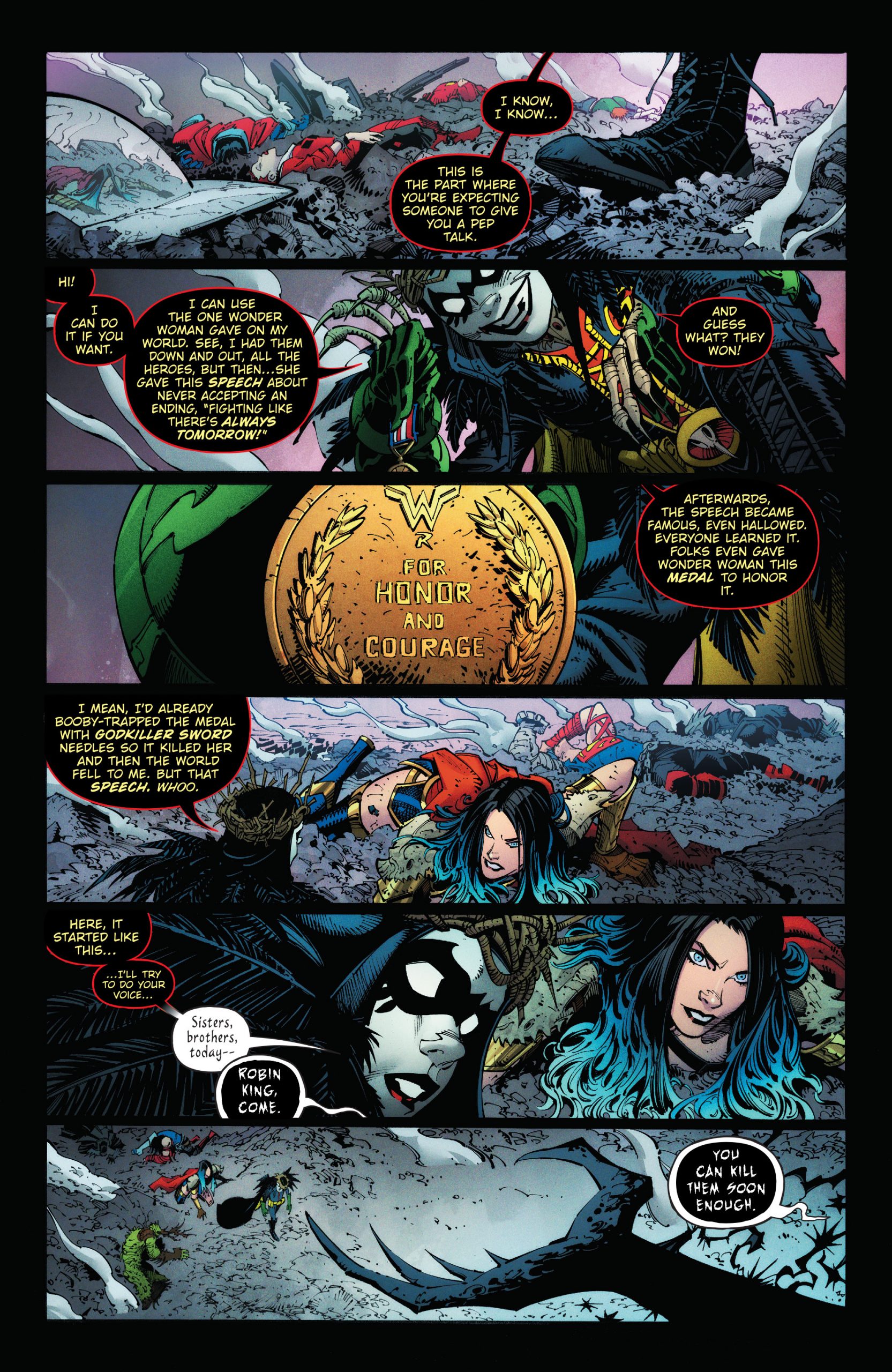 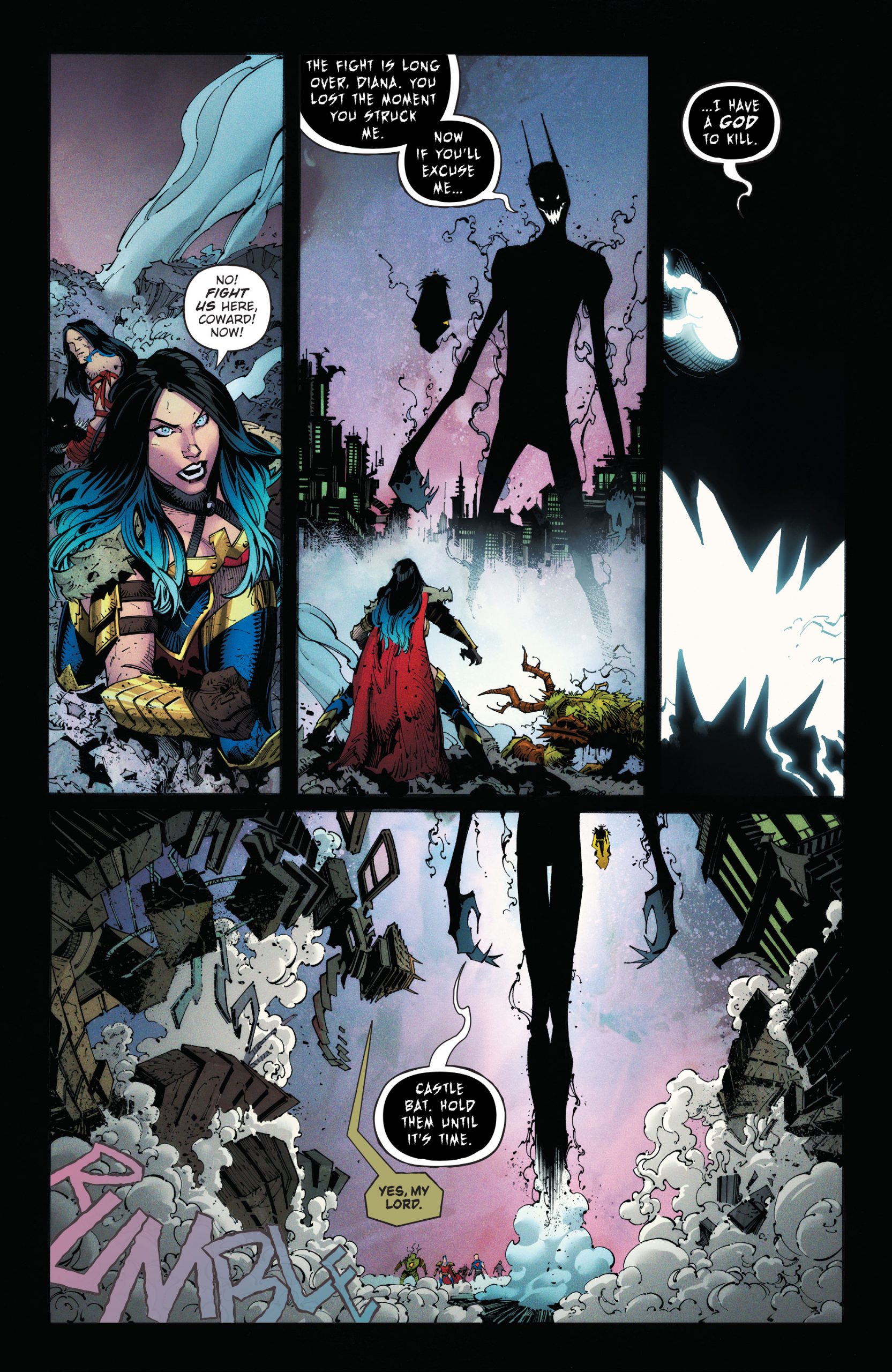 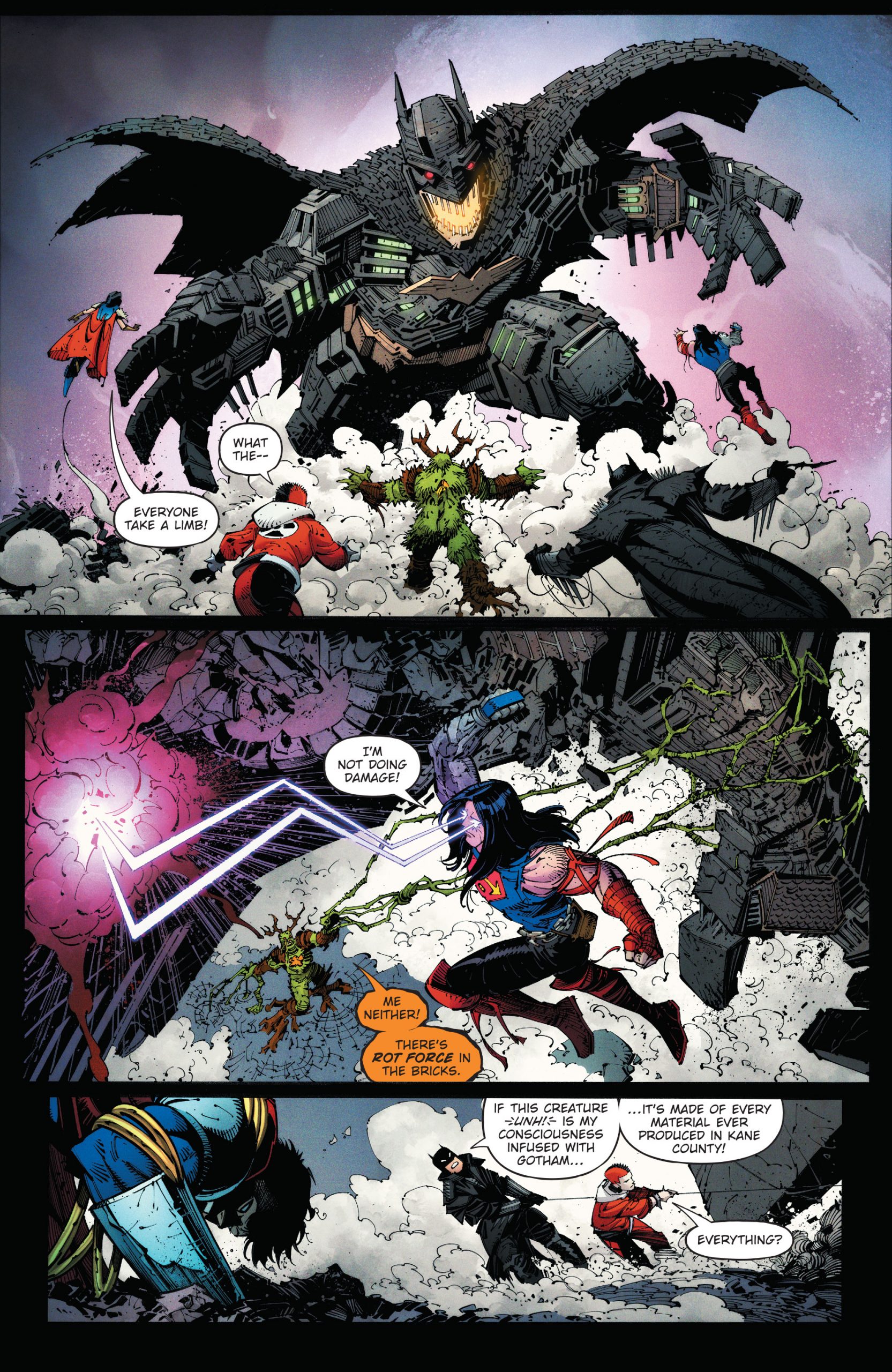 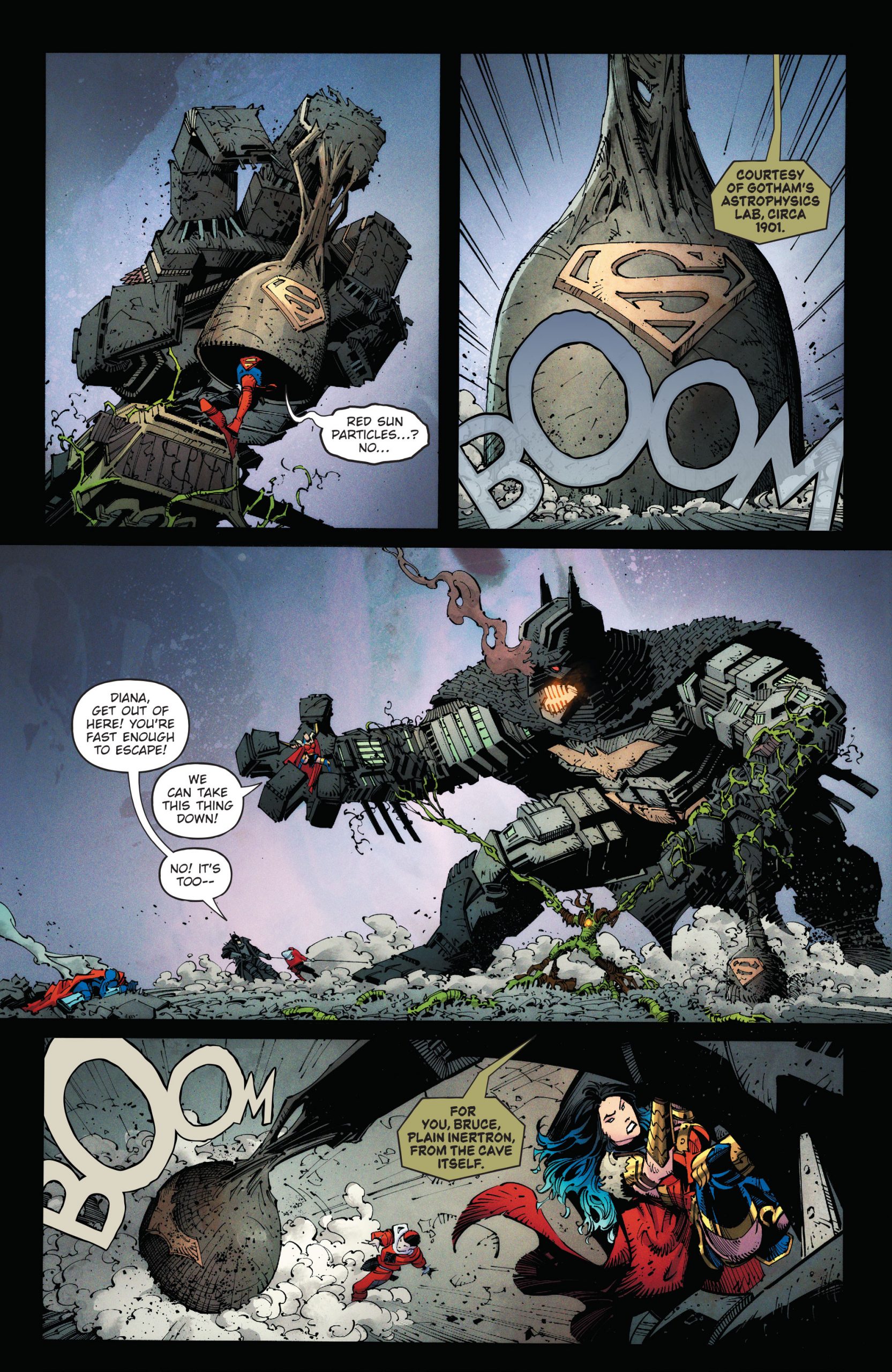 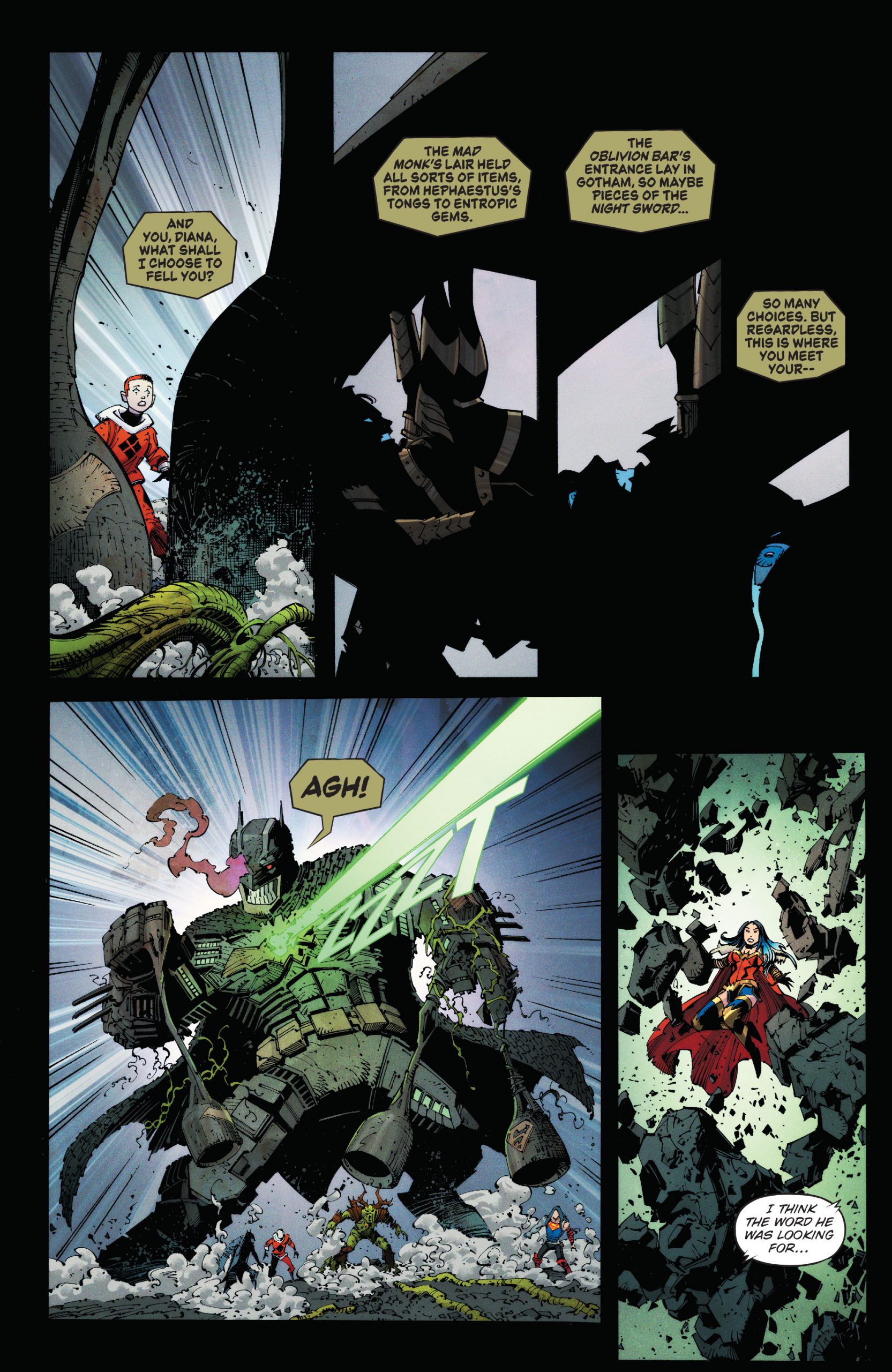 Castles That Walk, Talk… And Fight

Greg Capullo and Jonathan Glapion have always been incredible, but the work they’ve been producing for Death Metal has been simply jaw dropping. We’ve always known that they can deliver action, and huge set-pieces, but sometimes a simple facial expression; a glance straight at us, the audience, or a thoughtful look into the distance, can evoke more of an emotional response than all the cosmic carnage in the world… or multiverse.

Pages 12-15, featuring beautiful, tender moments between the Trinity, Superman rallying the troops, and Wonder Woman leading the charge, are four of the best written, and beautifully rendered pieces of honest to goodness, pure comics art you could ever hope to read.

Everything about this issue is perfect. FCO “Power Pallet” Plascencia’s rich color choices, Tom “No Nonsense” Napolitano’s luscious letters, the script , the dialogue, the visuals… all of it just sings. KRAKAKOOM, indeed.

Lex Luthor has never been written better. Ever. Over the last eight decades I’ve never sympathised with him, or really understood him… until now.

In case you haven’t guessed yet, I absolutely LOVED Dark Nights: Death Metal #5. Secret origins, heartfelt pleas, truth and consequences… this issue has it all. There are only two chapters left of the main series, so we’re marching onwards to the end… or a “Great Beginning.”

Superman: From here on out, we fight together, every living being on this–

Comic book inclusivity and diversity is just as important, and even more complicated than our own. Brilliant.