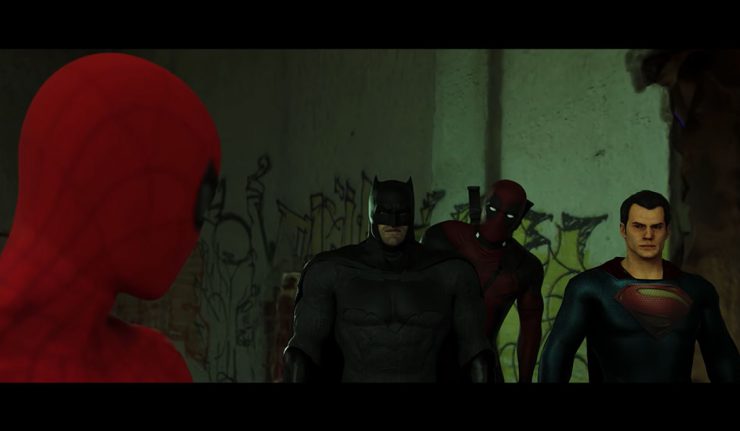 The world is in the midst of a quarantine in the attempt to stop the spread of the coronavirus, one of the most contagious and deadliest sicknesses to have stricken mankind in ages. As a comic book and fantasy fan, it’s fairly easy for me to daydream about how superheroes would save the world. The scenario would involve Batman extracting an enzyme from Swamp Thing or Martian Manhunter. He would then transport it to a lab run by Lex Luthor, Ray Palmer, Mr. Terrific, and any of the other brightest minds in the DC universe. There, they would develop a vaccine that could eradicate this virus once and for all. My daydream is likely too cliche for comic books, but some fans have come up with their own scenario of how superheroes could take on the virus. Cropping up week or so ago, this film features heroes from several different properties and media uniting against coronavirus.

It’s called Heroes United: Coronavirus and it features one of the biggest crossovers I’ve ever seen. Not content with simply DC and Marvel, the creators opted to use characters spanning video games, movies, and anime too. The characters unite against an army of tangible zombie-like manifestations of the coronavirus. This device allows our favorite heroes to physically beat them up in a most satisfying way. Rick and Morty, the titular characters from the Adult Swim series captain the crusade, as Rick has developed a vaccine and a plan to save the world.

Despite clearly being made on a shoestring budget, the action is fairly phenomenal as is the direction and editing. Also, there’re a few pretty funny memes and in-jokes in there to bring it some levity. Given a proper budget, this could easily stand side by side with some Hollywood films. (Rights and legalities to the characters notwithstanding.) To name a few heroes, the flick features Batman, Superman, Captain America, Iron Man, Leonardo of TMNT, Sonic the Hedgehog, CJ from Grand Theft Auto: San Andreas, John Cena, Goku from Dragon Ball, and Saitama from One Punch Man, all uniting against coronavirus. Yeah, it’s fair to say that one of your favorite characters is likely included on the roster.

As I said in a previous article, it’s not much, but what it will likely do for fans like you and me is put a fleeting smile on our faces. During this scary time of uncertainty, any smile that helps us to momentarily forget the predicament we’re all in, really goes a long way right now.