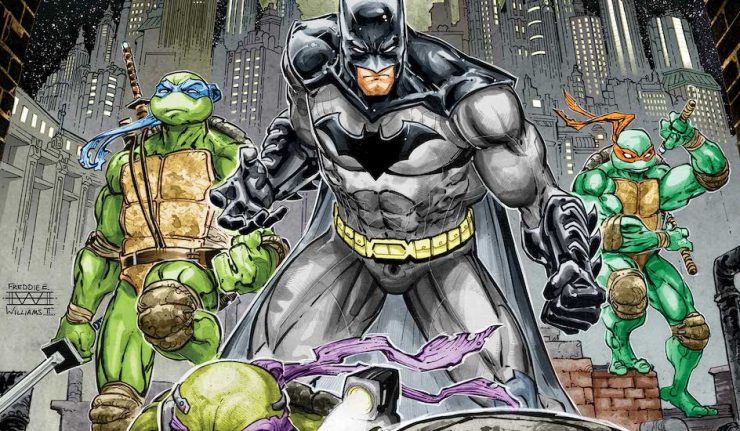 At the end of 2015, IDW Publishing and DC Comics began an epic 6 issue mini-series crossover, Batman/Teenage Mutant Ninja Turtles, featuring the Dark Knight teaming up with the 4 mutated turtle brothers.

Earlier this week, it was announced that the series with be getting an animated film adaptation.

The 80th anniversary of Batman collides with the 35th anniversary of the Teenage Mutant Ninja Turtles this May as DC Publishing and IDW Publishing today announced plans for BATMAN/TEENAGE MUTANT NINJA TURTLES III, a stunning six-issue conclusion to the smash-hit crossover trilogy.

“I still remember the e-mail asking me if I wanted to write the first Batman/Teenage Mutant Ninja Turtles crossover,” said series writer James Tynion IV. “My brain couldn’t even process what I was reading for a few seconds, and I started having a panic attack about fitting it into my work schedule. Then, finally, I pictured Michelangelo’s reaction to seeing the T. Rex in the Batcave for the first time and started laughing out loud.”

“When I got the call asking if I would be interested in doing some covers for a Batman/TMNT crossover,” added Teenage Mutant Ninja Turtles co-creator Kevin Eastman, “the ten-year-old Batman fan got up and ran around the room screaming at the top of his lungs with excitement…then the fifty-year-old life-long Batman fan did the same thing!”

Tynion IV (BATMAN, JUSTICE LEAGUE, JUSTICE LEAGUE DARK) reunites with artist Freddie E. Williams II (INJUSTICE VS. MASTERS OF THE UNIVERSE, HE-MAN/THUNDERCATS) and colorist Jeremy Colwell for this final chapter starring Gotham’s Dark Knight and New York’s Heroes in a Half Shell. Eastman will illustrate variant covers for the series and, as he did in collaboration with Williams II on 2017’s KAMANDI CHALLENGE, contribute interior artwork at a pivotal point in the new run.

“The story for volume three is a blast, and I am having the time of my life illustrating it,” said Williams II. “And lucky for me, I’m not alone in this grand task. I’m having a huge and exciting personal crossover of my own with one of my all-time heroes and favorite artists, Kevin Eastman! Say what? Yup, you heard that right! We’ve got something so fun and exciting planned! I’m geeking out about it every day, and I think all of you will, too!”

“I’m absolutely thrilled to have Kevin Eastman, co-creator of the TMNT, as our creative partner on the series,” continued Tynion IV. “Kevin will be working closely with Freddie, contributing art on part of the run in a really exciting way that I can’t wait for fans to see. We’re going to see Bats and Turtles collide like never before in a story so big, it’s the perfect way to conclude our Batman/TMNT trilogy.”

In the first two blockbuster volumes, our heroes battled the evil of the Foot Clan in Gotham and then went head-to-head with Bane in New York. But now, in the third and biggest chapter, Krang has gotten his hands on the most dangerous technologies in the DC Universe—and no universe is safe from his wrath!

“For the last few years, with the incredible Freddie E. Williams II, I’ve been able to shepherd the meetings of two of pop culture’s biggest, most iconic brands in huge, exciting ways,” said Tynion IV. “We’ve brought Shredder to Gotham leading a riot of mutant Arkham inmates, and we’ve seen Bane bring Venom to the streets of the Turtles’ New York City. But now, on the 80th anniversary of Batman, and the 35th anniversary of the Teenage Mutant Ninja Turtles, we’ve got the biggest, craziest idea ever, one that brings all three volumes full circle to make a real statement about what these characters mean to us.”

“I am so incredibly proud of the series so far,” concluded Eastman. “Batman/Teenage Mutant Ninja Turtles has easily been one of my biggest personal geek-out moments ever, and from what I’ve seen of series III, my advice to fans is to buckle up, things are about to get seriously crazy! Forever grateful that James and Freddie invited me into their backyard to play for a bit.”

Fans of the comic series will see the Dark Knight continue to fight like never before with wall-to-wall ninja action in BATMAN/TEENAGE MUTANT NINJA TURTLES III beginning May 1, 2019. 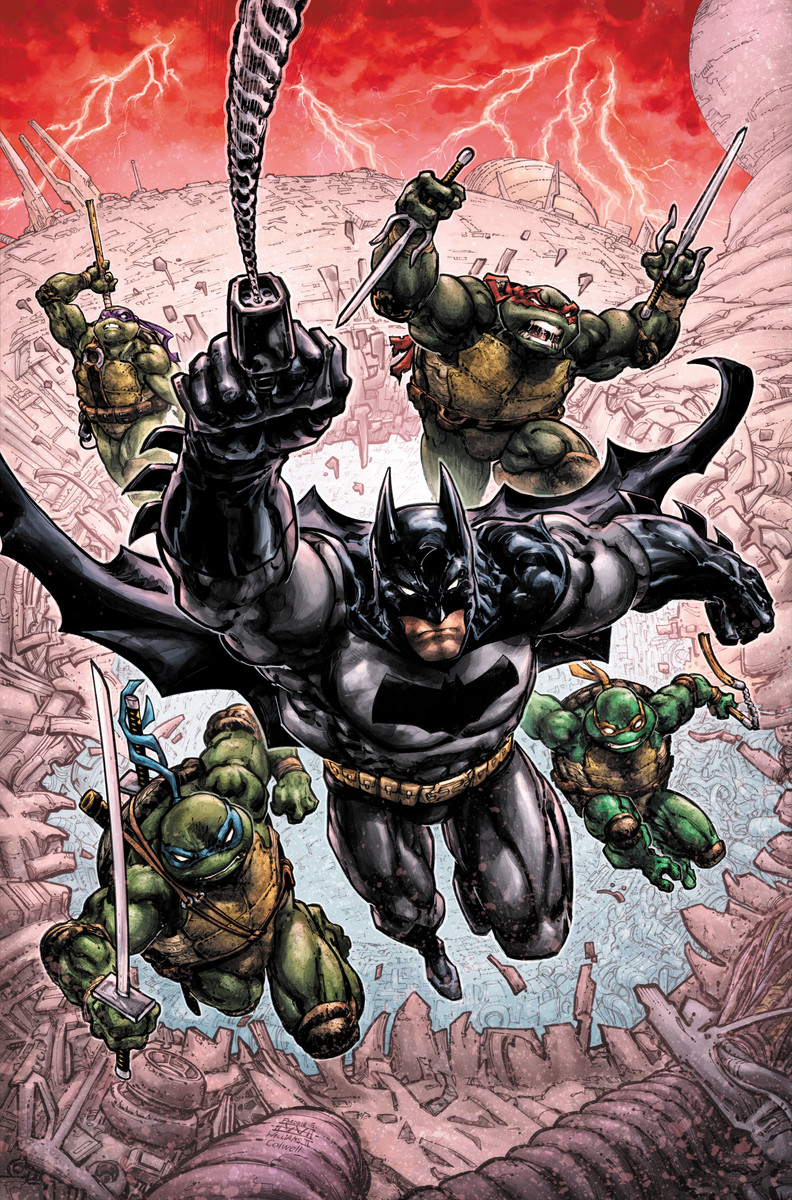 Did you enjoy the first 2 instalments of Batman/Teenage Mutant Ninja Turtles? Are you excited for the conclusion of the trilogy? Personally, this series is in my pile of shame of comics that I haven’t read yet, but I look forward to consuming the trilogy in its entirety!