“Into the Bleed” – Part Two 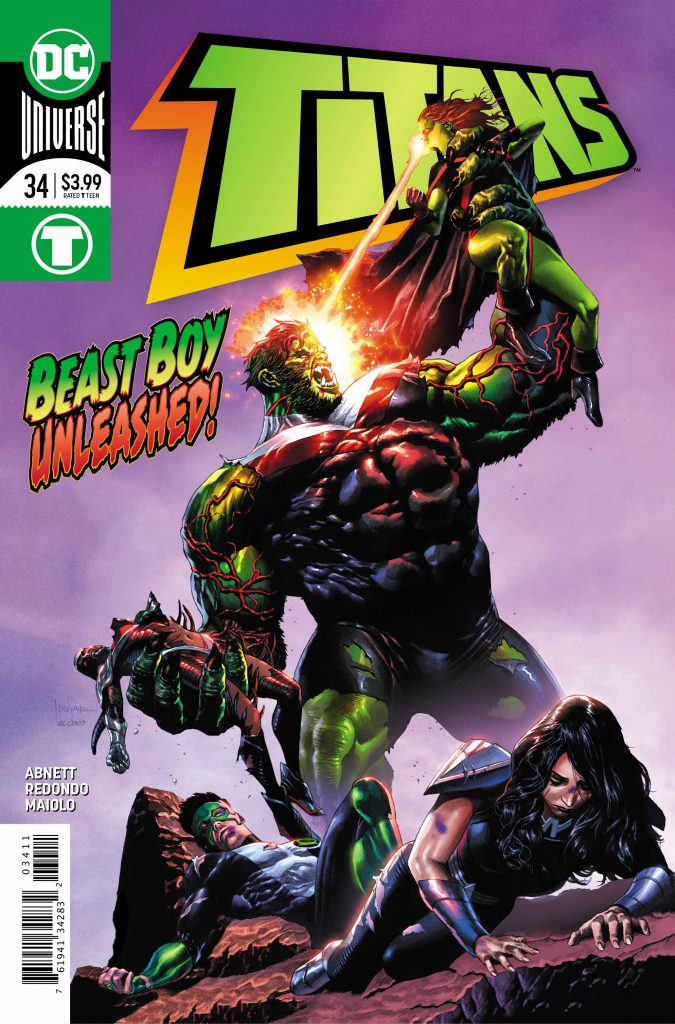 I want to preface this review by stating two things that I dislike in comic books, but I see frequently: misleading covers, and the constant use of text boxes to point readers back to events that happened many issues ago (i.e. “See Titans #24”). This issue does both of those things, however I don’t want you to think that meant I hated it. Yes, the cover is misleading and should have maybe been the cover for the following issue, and yes, there are quite a few small boxes reminding you of previous events in past issues, but despite my dislike of these things, they don’t really take too much away from the issue at hand.

If I could subtitle this issue, it would be “Into the Bleed – Part Two – Villain Monologues.” The writing here is pretty solid, it’s just that it’s all focused on Mother Blood and her plans for the Titans and the Bleed. This series has always been strongest when it focuses on the team dynamic, be that drama or action set pieces, however this issue barely has any of that. Titans is coming to an end with Part Four of this story, and with the first part of it looking so promising, I have to say I was a little disappointed with how this second chapter panned out. 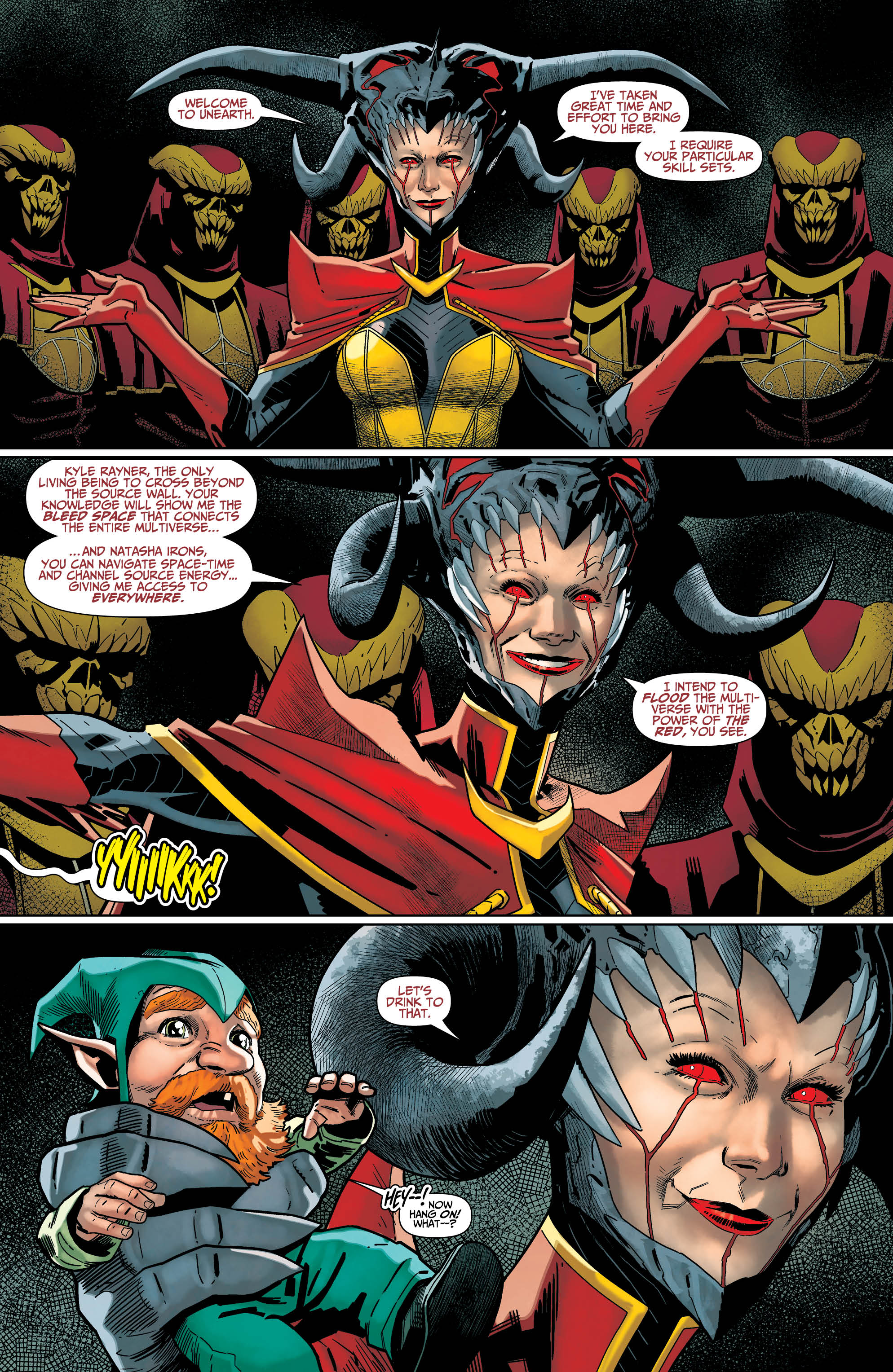 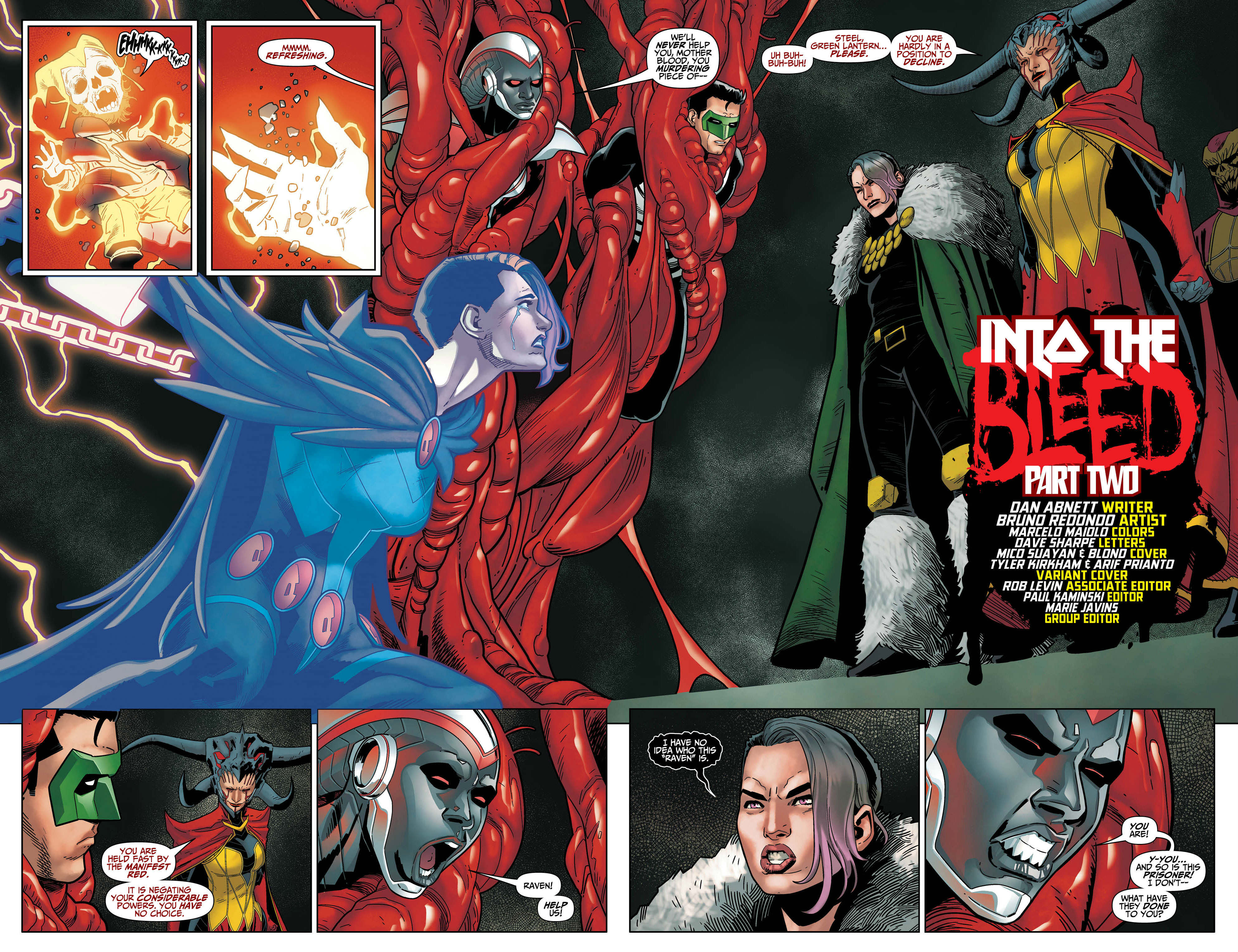 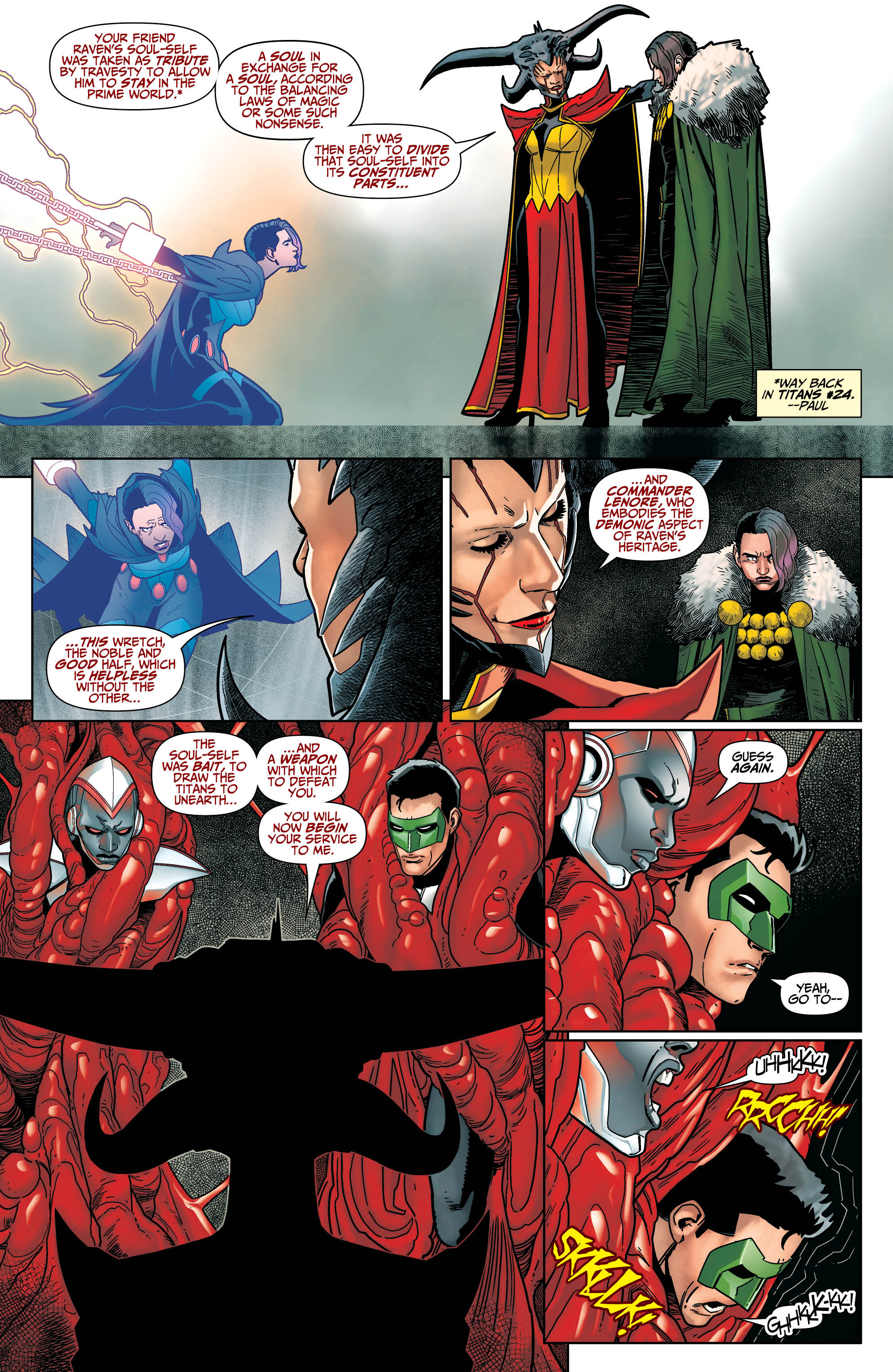 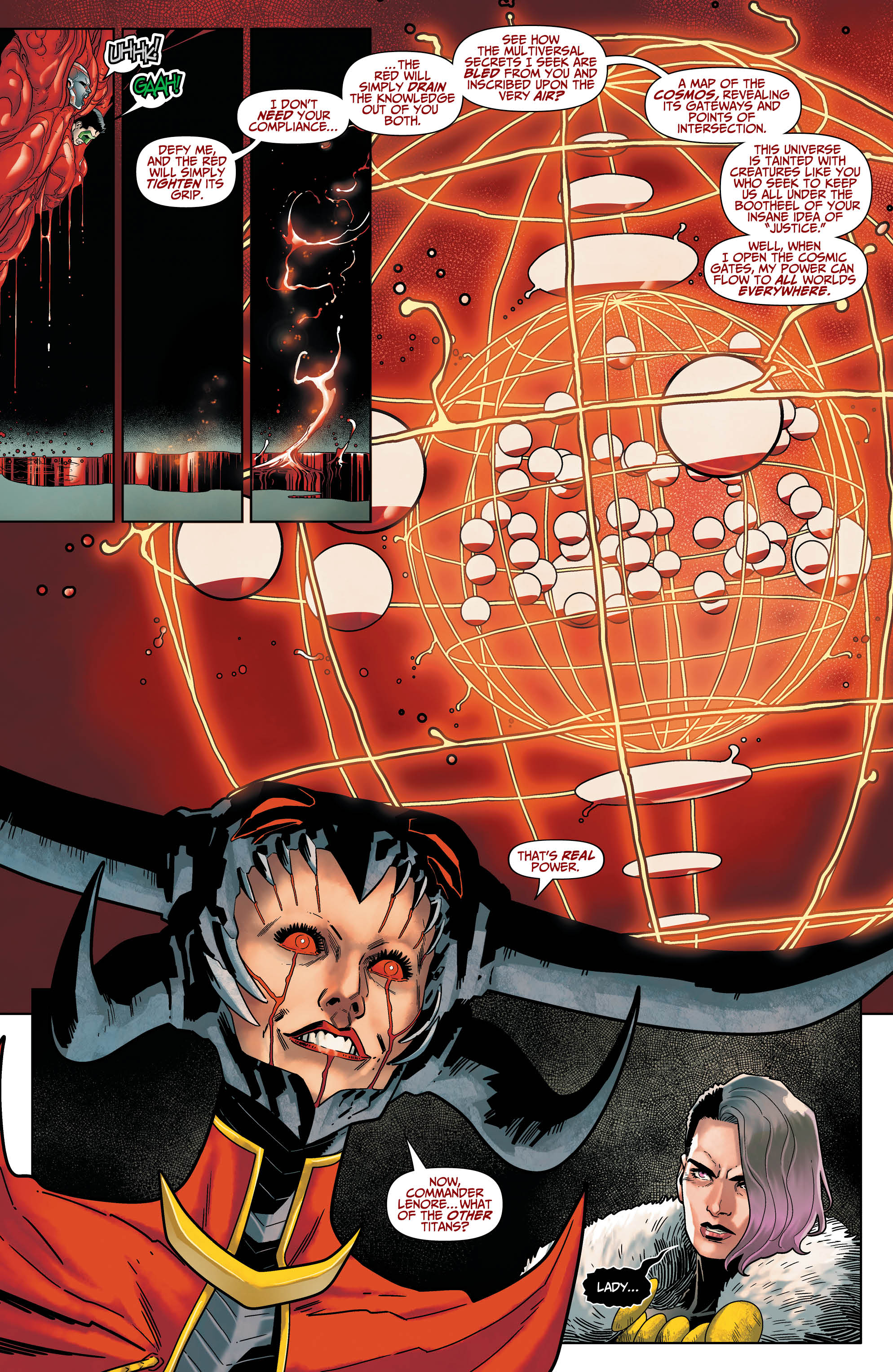 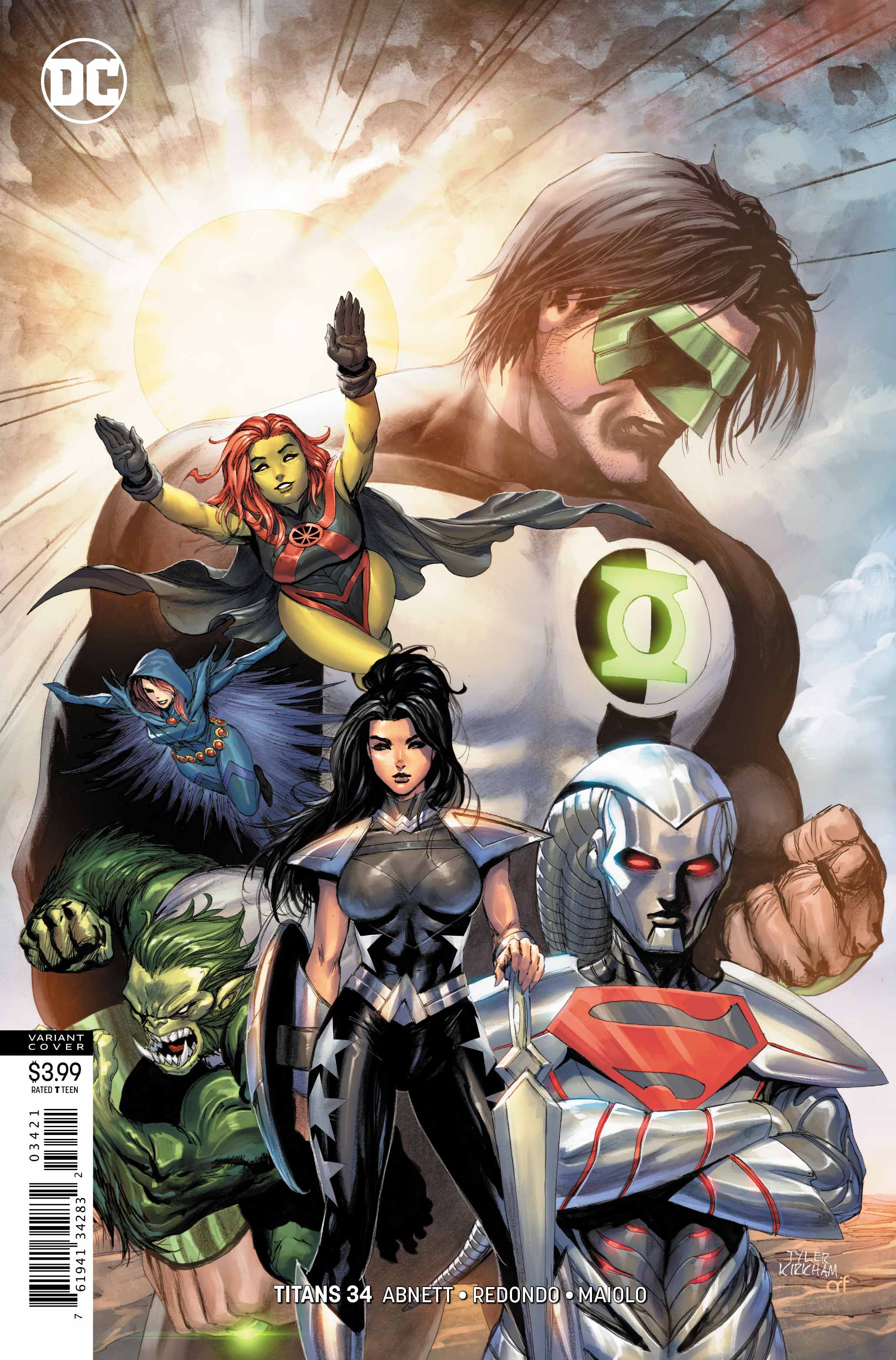 Last issue we got this incredible team dynamic, as they basically became a Dungeons and Dragons party. Here though, we have the team split up, as per how the last issue ended, yet we don’t get to see more than two pages of the remaining members searching for Kyle and Steel. The issue ends on the cliffhanger that was promised on the cover, which slightly annoyed me; you wouldn’t make a poster for Empire Strikes Back that says “Vader is Luke’s Father” on it, so why would Titans, or any comic for that matter, use the final panel reveal as the cover?

As a result of this, I went into this issue expecting an all-out brawl between Beast Boy and the Titans, however what we got was very different. Again, I still enjoyed it, but I feel like I was promised something else. The art is consistently good and keeps the issue moving along really well, and I think there are about three or four different lettering variations in this issue which definitely keeps things fresh. The writing itself is really solid and “Necessary,” however having it all as a monologue when it could have been something much more interesting feels like a missed opportunity.

Despite my criticisms, I still liked this issue a lot and enjoy where the story is going. With only two issues left, I hope that we get to see the team in full action again as they fight their way to Raven, Kyle, and Steel. With a lot of the backstory and villain motivations out of the way in this issue, these final two chapters of Titans could stand up as the best possible ending to this pretty stellar run.