“The Lords Of Order” – Chapter One 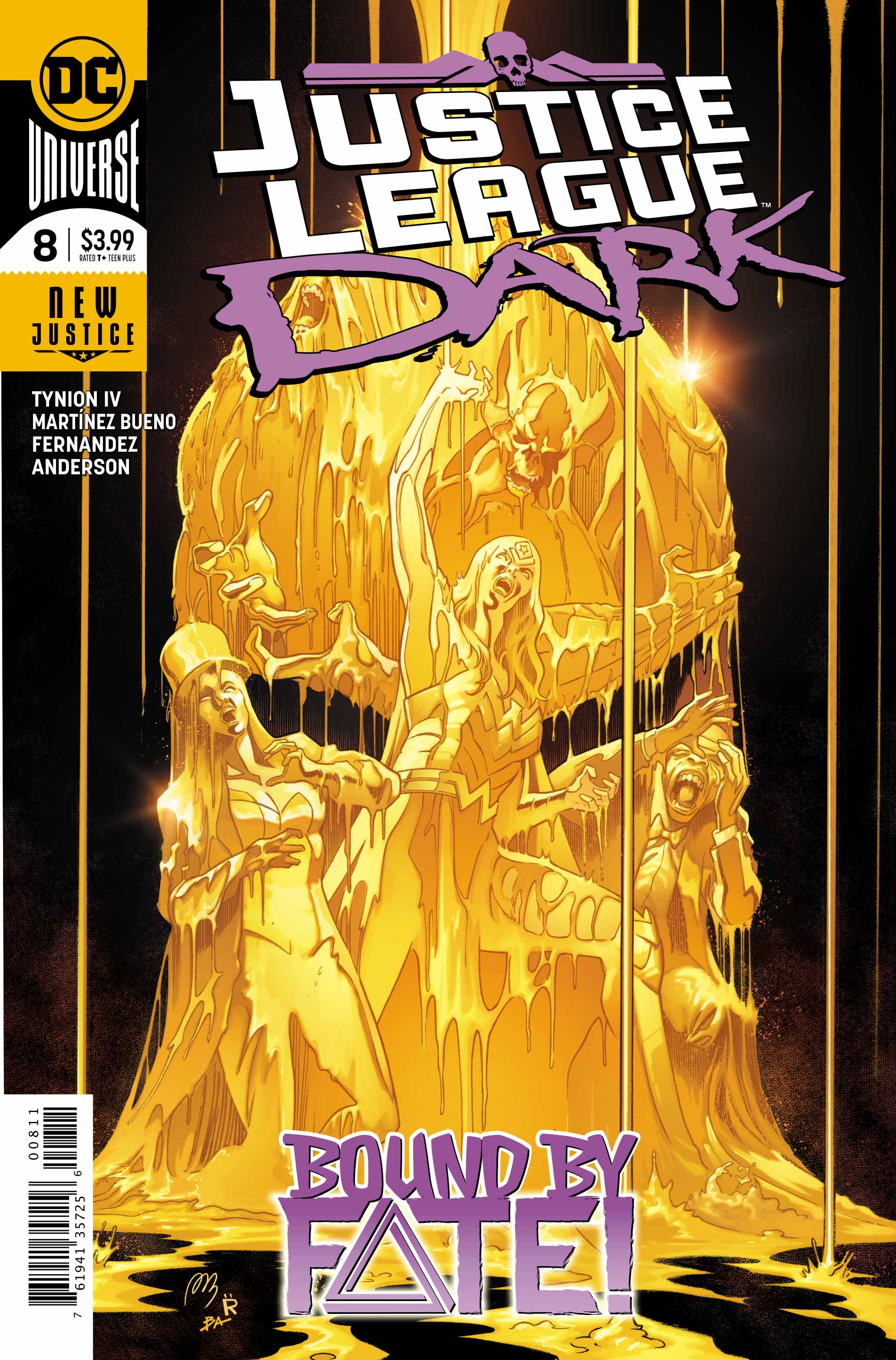 The Upside Down Man was scary enough on his own, but last month we met the rest of the Otherkind, his siblings; The Soup, The Conjoined, The Offspring and The Rip. I don’t know what inspired James Tynion IV to create these nightmare creatures, or what possessed Álvaro Martínez Bueno when he designed them… and I don’t think I want to. In this issue the invaders attack, and I wonder if the League have any chance of defeating them.

I love the way the team splits up, each having their own missions and agendas in this issue. Swamp-Thing and Detective Chimp are helping the survivors of the Otherkind’s attacks, after the apparent deaths of Constantine and Lucifer. Meanwhile, Wonder Woman and Zatanna are on a quest to enlist the aid of one of DC Comics’ most powerful wizards. This leaves Man-Bat alone to try and release Khalid Nassour, a former Doctor Fate.

I’m really digging the way that this series is being broken into mini arcs, but still tell one large, over-reaching story. Right from issue #1 and “The Last Age Of Magic”, through “The Witching Hour” crossover with Wonder Woman, momentum has been building. Then we had “Shadow Pact” which reintroduced the Blue Devil and the realm of Myrra. I don’t believe for one moment that any of these characters or settings are there just for nostalgia’s sake, so cannot wait to see how they’ll affect the series moving forward. I’m really nervous about what Circe has up her sleeve, and don’t even get me started on the new arrivals, from the final page of this issue!

Etrigan fans have really been spoiled in recent months. Not only does Jason Blood’s demonic alter-ego show up in this issue, he’s in Detective Comics too! Add his rap attack from Batman: Damned #2 to the list, and things feel Kirbytastic! 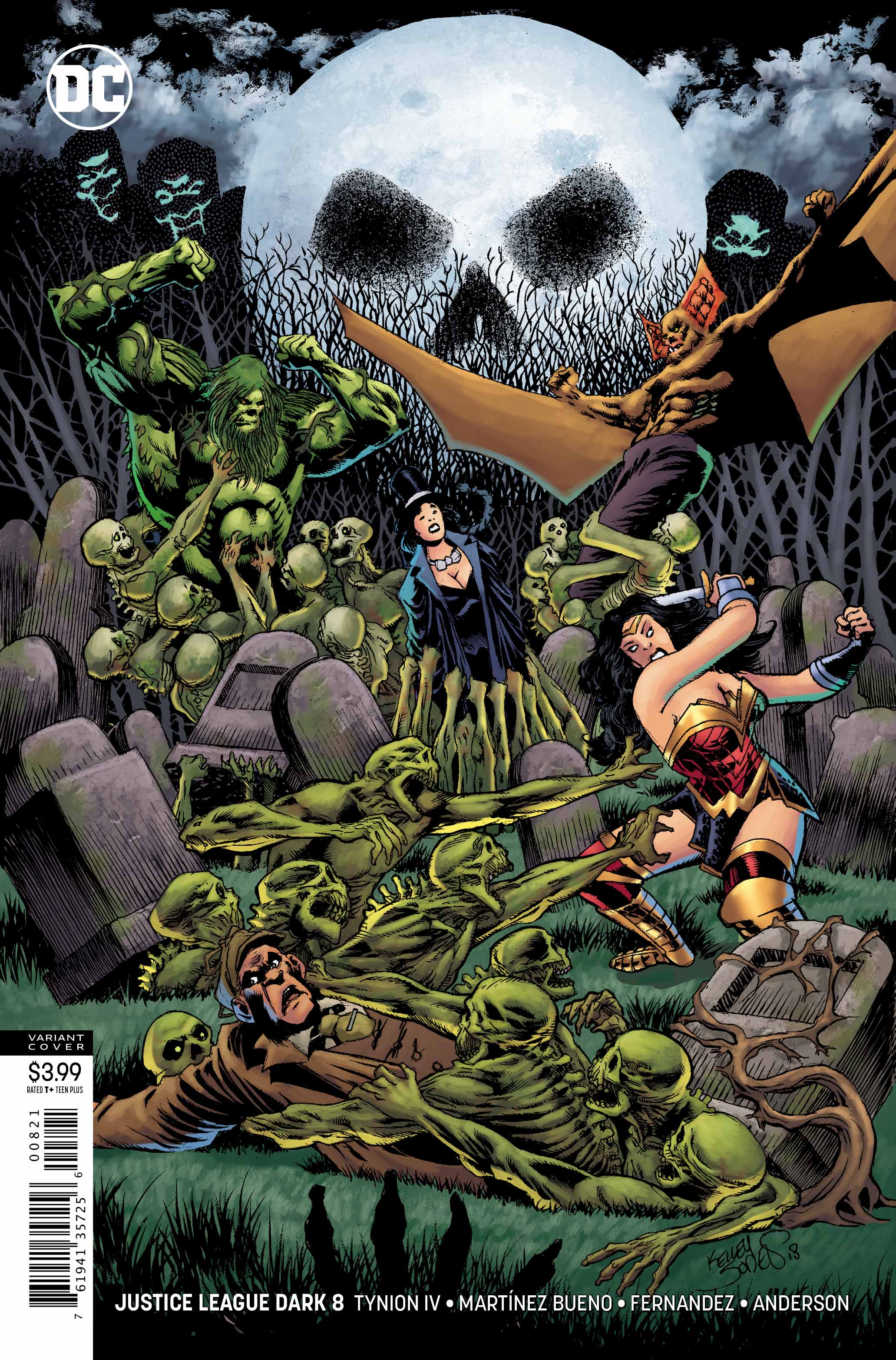 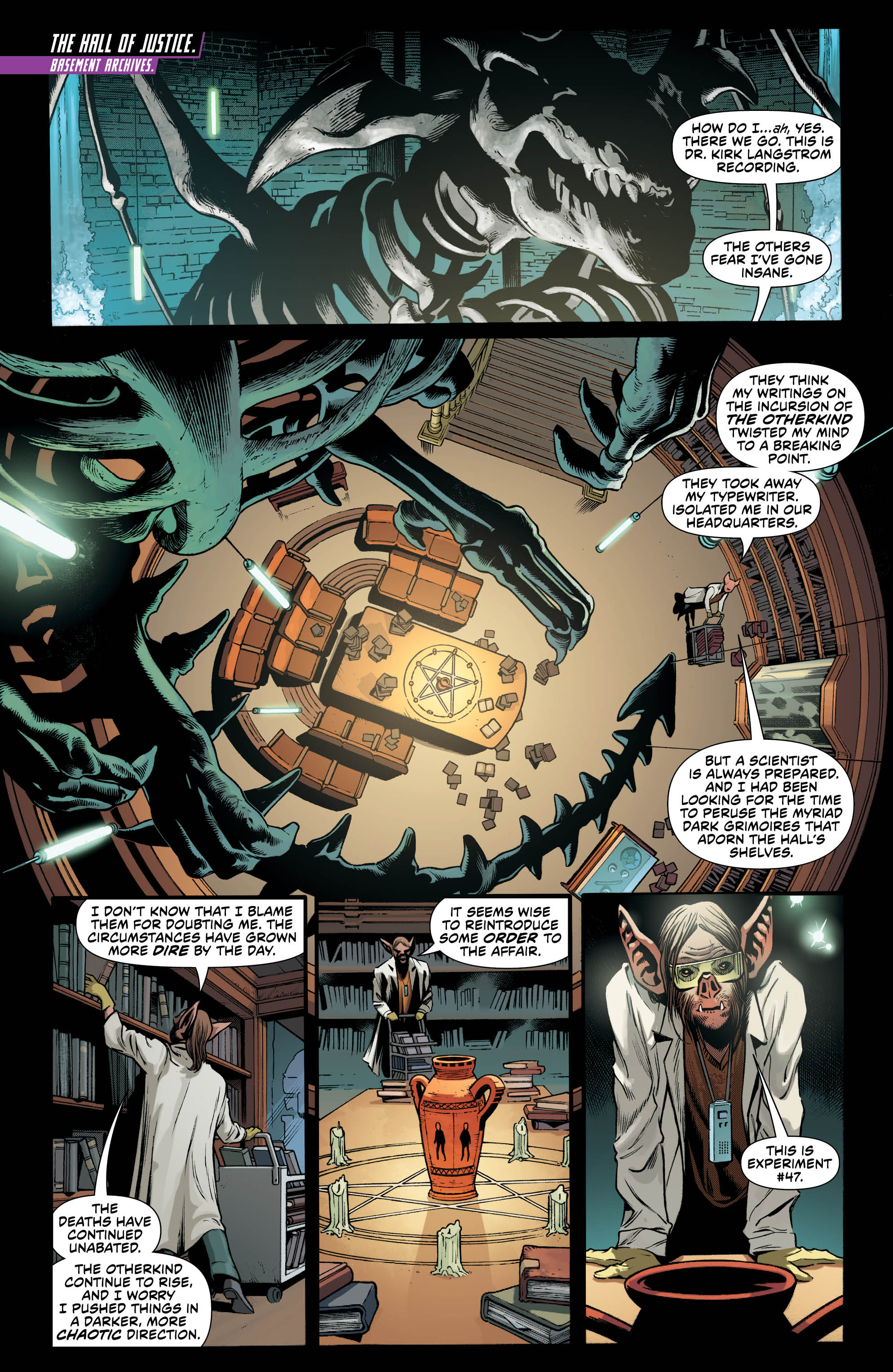 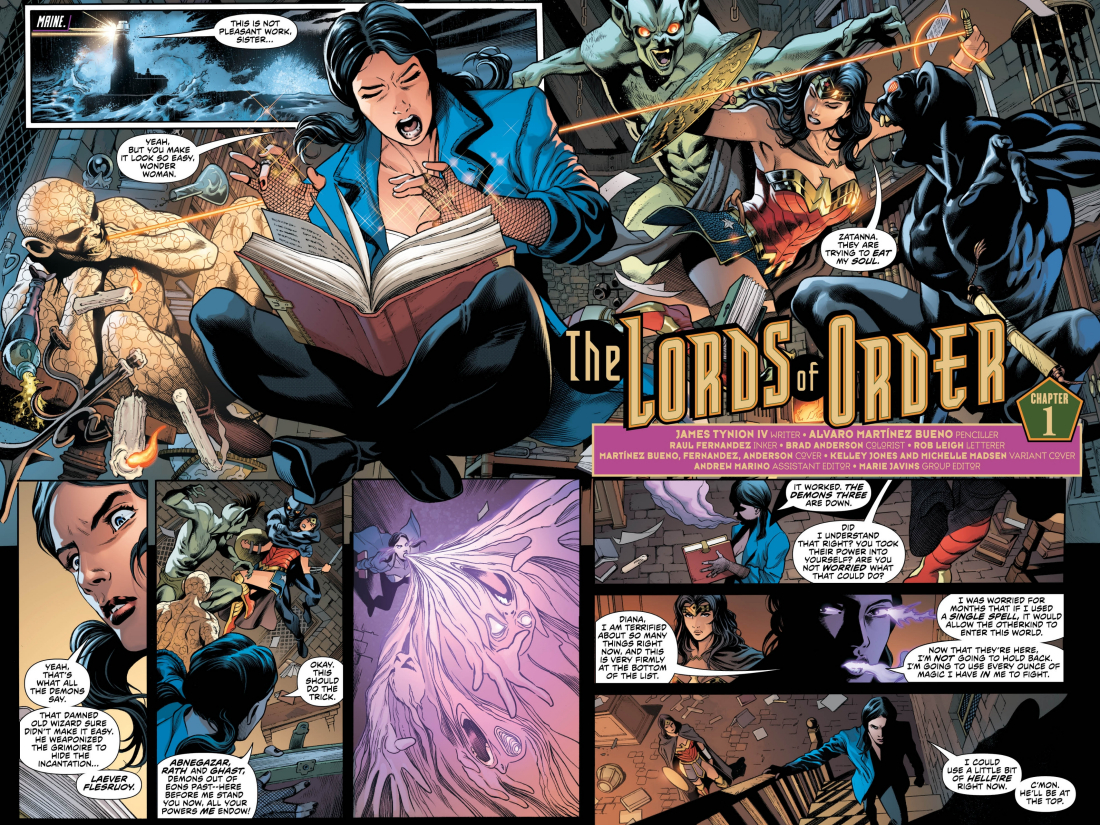 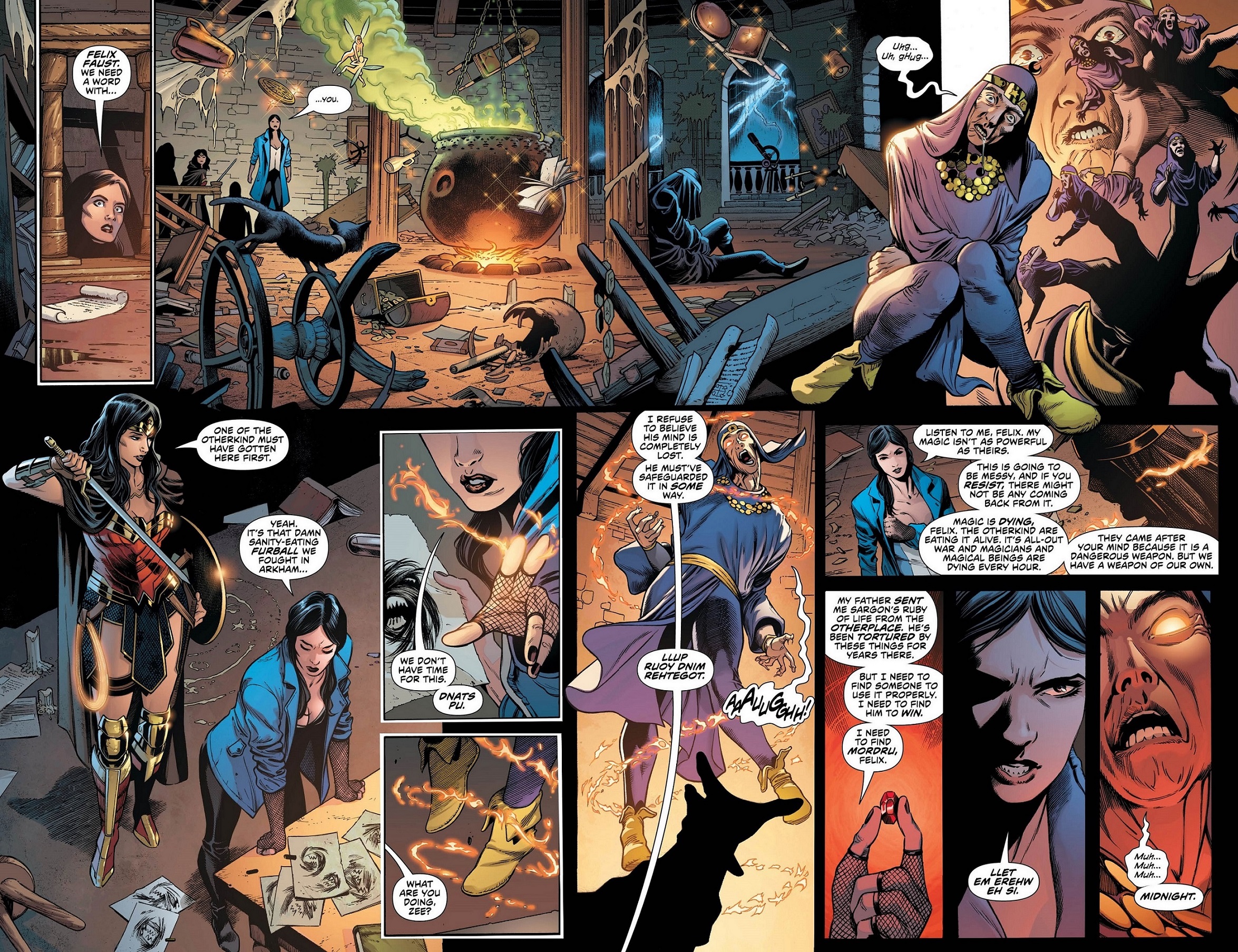 Speaking of legendary artists; Álvaro Martínez, Raül Fernandez and Brad Anderson… damn, these guys are good! Not just the ultra creepy Otherkind, look at their versions of Zatanna, Wonder Woman and Swamp Thing! I absolutely love it when Alec gets thorny, and confronts a certain demon of our acquaintance. This new look comes complete with barbs and glowing red eyes. Wonderful.

Trying to pick a standout page in this issue is like trying to choose which limb you wouldn’t mind losing. It’s impossible! Look at the perspective crane shot looking down on Man-Bat on page one. I can almost feel the camera rotating, as we pan down. The double page spread with a floating Zatanna, and Diana in full on warrior mode. The double page spread after that one… this book is gorgeous! The alternate cover by Kelley Jones doesn’t disappoint either. When I say that this issue is gorgeous from cover to cover, I mean that this issue is gorgeous from cover to cover!

Álvaro, Raül, Brad… could you three do me a favor and tell Rob Leigh that he’s a G? He is, and you can tell him I said so… thanks. It seems like Rob Leigh is lettering the majority of the titles that I review, and his work is top drawer. Every. Single. Time.

I don’t know what actually scares me more; Nabu and his kin, or the Otherkind. Suffice it to say that this series always delivers, in terms of character, dialogue and art. This comic is always one of my first reads and a series that I will treasure for years to come. Anyone who’s after a new comics experience, who wants more than just superheroes; you could do a lot worse than pick up Justice League Dark.

Review: The Batman Who Laughs #3