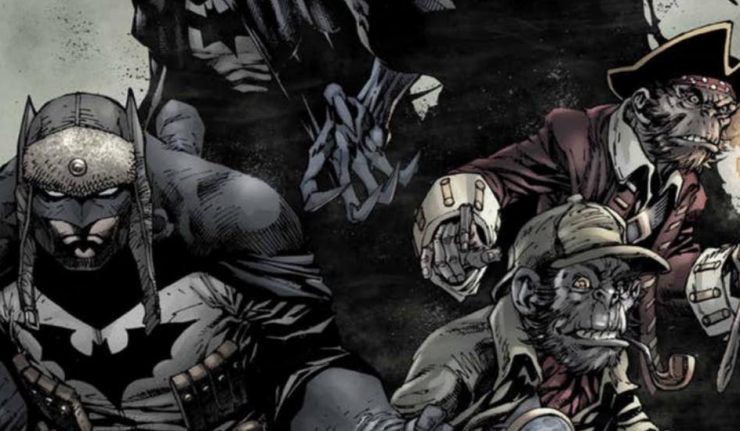 Welcome to DKN Roundtable where the staff gives commentary and opinions about the latest Batman news. Here, we look at the latest issue of the Bat-centric DC Comics event comic Dark Nights: Metal #6. On the panel are DKN writers Eric Lee and Steve J Ray.

How did you feel about the ending to Dark Knights?

Steve: As one of the few who knew most, if not all of the characters, and found the whole story easy to follow – I know I’m in the minority – I thoroughly enjoyed it.

Like I said in my review for the issue, it may not be literature, but it’s great fun.

Eric: I liked the ending for the most part. But, man, there were times when I felt like [writer Scott] Snyder needed more pages to let some scenes breath. That is probably my biggest complaint about issue six.

Steve: Even being double sized, there were some parts that felt a little rushed on first reading. When I went back and just read the two preludes and six issues – as opposed to everything including one shots – it worked really, really well.
Eric: I am going to do you one better and going back to reread all of Snyder’s run and then Metal.
Steve: I’m gonna do that too!

How did you feel about the way the Dark Batmen were taken out? Do we even see many of them taken out?

Eric:  I wasn’t sure if it was not seen on purpose or because of Snyder not having enough time to show it, but I think we don’t see any Dark Batmen actually dying on page… except for the Red Death and maybe the Drowned?

Steve: Hmmm… I didn’t even spot that, I thought that it was shown. I will have to re-read it again now.
Eric: The Drowned was stabbed by Aquaman, though who knows if that was a fatal wound or not.
Steve: I guess we have to take it as read. Perhaps the fall of Barbatos and The Batman Who Laughs brought about the downfall of the others? Maybe that pulled them back into their own doomed and dead dimensions?
Eric: I am still curious what is the ultimate fate of the Batman Who Laughs. Batman just sorta left him and the Joker fighting with each other.
Steve: He’s too good/bad a villain to lose. I really want to see more of him. That’s an ambiguous ending that I can live with.
Eric: Same here. And same goes for all of the evil Batmen. I can totally see them making reappearances in the future.

So…Wonder Woman? Do you like Snyder’s portrayal of this tough, but inspirational figure?

Steve: She kicked ass! Hell, yes. Pure warrior through and through. I think the Trinity were very well-portrayed. The issues where Batman was the hope for a despondent Superman, and then vice-versa were wonderful too.
Eric: I agree, their dynamic was great. I always sorta feel like Wonder Woman gets left out of the Trinity stuff. So this issue was great in showing what she contributes: love and compassion to rally her friends.
Steve: Agreed. Her role in Metal was key. She’s also made a good showing in Tom King’s Batman recently and in the new Brave & Bold mini-series.
Eric: I don’t know if it was due to the Wonder Woman movie, but I’ve been noticing the ‘Loving, but fierce warrior’ characterization more in the comics. And the comics are richer for that.
Steve: That’s been the main focus of her characterization since the 90’s vintage George Perez days, and her original 40’s premise too. For a long time in between though, she was more or less just a female Superman. I’m glad to have the Warrior For Peace back.
Eric: Loved when Wonder Woman did a rallying cry to pump up the other League members.
Steve:  It really was very, very cool.

Any thoughts on the Monitor being the captive of the Batman Who Laughs?

Eric: I loved it and was genuinely surprised that he was the masked hostage.
Steve: It makes so much sense. It also really leads brilliantly into what’s to come.
Eric: It was one of those unexpected, but logical guesses. Though I wonder how did the Monitor get captured in the first place.
Steve: With the fall of every parallel universe comes the fall of it’s Monitor. This would weaken the main man. It was quite cleverly handled.
Eric: Agreed, I only wished that more could’ve been done with him.

So, the Joker Dragon = Nightmare fuel?

Eric: I’m not going to lie, the Joker Dragon really creeped me out when I first saw it on the cover.

Eric: I’d highly recommend NOT giving that toy to any children

Steve: They’re creepy as F!
Eric: However, I’d love to see a child snuggle up with Dex Starr, the Red lantern cat plushie.

Steve: OMG, I laughed out loud at that bit. Every Batman meme ever is now officially DC canon! And Bats TEAMING UP WITH THE JOKER?!?
Eric: Yes!
Steve: The bit where Joker slices off LaughBats fingers… OUCHIE!
Eric: It really felt like a culmination of the Joker/ Batman storyline, especially Snyder’s storylines.
Steve: Absolutely!
Eric: Like “Death of the Family” was Batman “breaking up” with the Joker.
Steve: “Endgame” was the jilted lover’s revenge. Metal was the coming to terms.
Eric: And also how Batman is acknowledging “I need you” to the Joker. Kinda like the ending of The LEGO Batman Movie.
Steve: It’s the ultimate turnaround. I think they could actually both be a lot worse off WITHOUT each other after that.
Eric: Apparently, the Joker also has two bat-shaped switchblade knives which is funny, but weird.
Steve: Hey… he’s nuts. That’s actually disturbingly fitting.
Eric: I don’t even know how that blade is supposed to fold into the handle, but whatever.

So it seems like the Source Wall was destroyed? What do you think will happen next?

Steve: Oh… the cosmic events of No Justice and the new Justice League teams that flow out of it will deal with that. I’m sure.
Eric: There is so much to unpack from that epilogue scene.
Steve: Reading the digital preview copy from DC, where no creative team is credited, getting that huge Janin/Martinez/Fernandez epilogue was a FANTASTIC surprise.

The epilogue scene: What is up with the Swamp Thing’s bow tie? Or Mr. Terrific putting FairPlay on his tuxedo jacket?

Steve: That looked like Bat’s and Cat’s wedding reception to me. It seems that Batman’s never off-duty, even on his wedding day. I think that’s why they got Janin to draw those scenes.
Eric: Oh, that would be interesting.
Steve: That’s also why the new Justice League Dark team drew the Justice League side of the epilogue. That’s my take, anyway.
Eric: There were a lot of Justice League fashion disasters. I just think that Mr. Terrific sewing Fair Play onto a tuxedo (!) is a crime. It’s hideous.
Steve: I think the whole Fair Play thing on a costume is a crime… period! Even on Arrow it’s tacky.
Eric: Yeah, but I guess that’s what happens when you name yourself “Mr. Terrific”.
Steve: I know, right?
Eric: And he is supposed to be one of the smartest men in the DCU.
Steve: In my experience high intelligence can also equal low common sense. “Captain Justice Hero Man.”
Eric: At least Bruce has a cool bat-symbol when he brands things.
Eric: And there is the implication that Hal Jordan received a complete tuxedo from Bruce Wayne, but the tossed the jacket so he could wear his bomber.
Steve: That’s so Hal.
Eric: That really is. And Barry Allen apparently wears sneakers with a suit. I didn’t realize that Barry was so casual in the comics.
Steve: That’s so Barry. It just makes sense as a character beat. Very 10th Doctor. It’s called “Geek chic” apparently.

Highlights or lowlights of the finale?

Steve: Everything involving Batman, Superman and Wonder Woman was great. The Joker/Batman team-up was fantastic. Hawkman ripping through Barbatos was AWESOME! Seeing all the Elseworlds Batmen really made me happy. I LOVED that.
The only lowlight was that I felt maybe a little too much was crammed into one issue. But that got better once I re-read it.
Eric: I think that Snyder would’ve benefitted from one more issue just to let his moments breath more. I don’t know if there are any low lights for me, I just feel that some stuff could’ve been explained better.
Steve: Same.
Eric: Oh, another highlight: Detective Chimp was alive and thriving!!
Steve: That was revealed in “The Wild Hunt”. I never liked the character until Metal. Now I’m a fan.
Eric: I remembered you saying that Chimp was toast in issue number three.
Steve: Wishful thinking back then… glad I was wrong now.

How excited are you for Snyder’s No Justice and Justice League run?

Steve: I can’t wait… but I’m especially excited for Justice League Dark. Awesome group of characters, and my favorite creative team handling it. I’ve already called dibs on reviewing it! Though Justice League Odyssey looks incredible too.
Eric: I am most curious of the inclusion of Darkseid on the team and why is he now wearing a hood.
Steve: Typical of the youth of today… says a man who practically LIVES in a hoodie.
Eric:  I like how Snyder’s Justice League team is more or less the cartoon roster.
Steve: Oh… TOTALLY! Vintage League.
Eric: That is MY Justice League team.
Steve: I think it’s everybody’s.
Eric: It felt wrong not having Martian Manhunter on a Justice League team for a while. I am glad he is back.
Steve: For me he’s essential. Up until the New 52 he was the only League member who’d been a part of EVERY incarnation of the League. I really didn’t like a lot of the New 52. I’m a HUGE Martian Manhunter fan. Rebirth has fixed a lot.
Eric: Definitely a step in the right direction.
Steve: Hear, hear. Oh… Hear, Hear! There’s a point in Metal #6 where Snyder or the letterer F’d up and wrote it as the INCORRECT, BUT OFTEN REPEATED “Here, here.” I HATE THAT!
Eric: Oh yeah! I noticed that too! Sounds like we know your personal pet peeve now.

Steve: One of many. You’re DKN’s fashion police, and I’m definitely the grammar police.

Wrapping up: Final thoughts on the Metal event?

Steve: It was not War And Peace or Watchmen, but it never set out to be. It was a series that set out to be pure, cosmic, gung-ho FUN… and succeeded admirably.
Eric: I like how the event is pure comic book super heroics: Bad vs good. I live for stories where the heroes act heroically and Metal is really about that.
Steve: Spot on. Vintage comics, but with 21st century sensibilities.
Eric: However, it is heady, so I can see where the high concepts lose some people.
Steve: Yeah, that’s my take to.
Steve: *Too
Eric: AH! Grammar police!!!
Steve: You see? I TOLD YA!
The follow up to Dark Nights: Metal, Justice League: No Justice #1 will be released May 9th.
Tags:batmandark nights metalEric LeeGreg Capullojokerjustice leagueScott SnyderSteve J. RaysupermanWonder Woman
share on: FacebookTwitter Tumblr
previous article
Deathstroke Actor, Joe Manganiello, Says Things Are In The Works
next article
Jason Todd Might Not Be Dead Robin In ‘Batman v Superman’