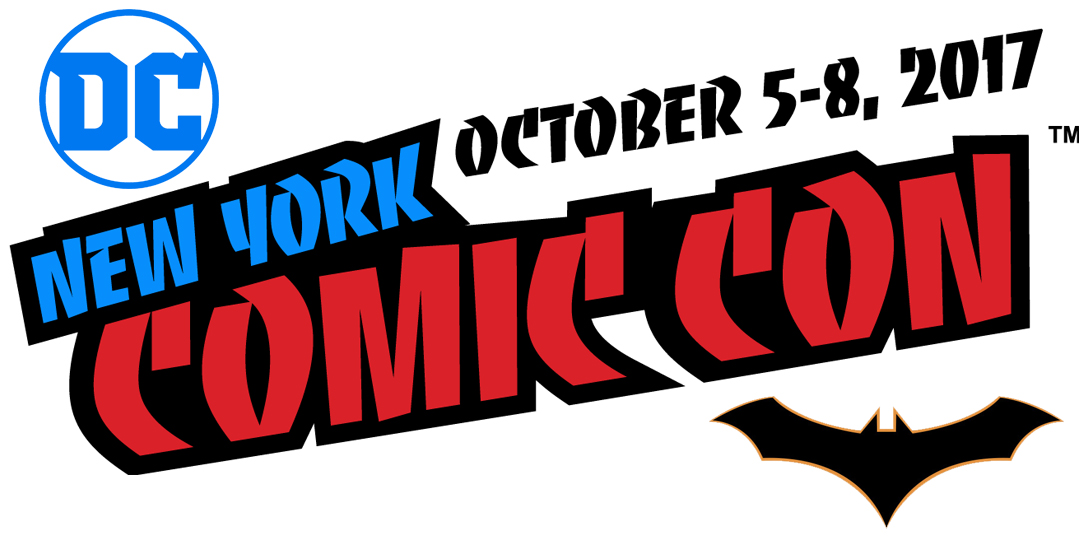 New York Comic Con is just a few weeks away and DC Comics intends to make a big splash. There will be no shortage of DC related panels, signings, and events while NYCC 2017 takes over the Jacob Javits Center October 5th through October 8th. DC will have a massive booth in the South Concourse (#1915) and will be the can’t-miss action for fan activities, along with costumes and props from the upcoming Justice League film.

Batman will see plenty of action at NYCC 2017 with the DC Metal / New Age of DC Heroes panel with Scott Snyder, Greg Capullo, Steve Orlando, Justin Jordan, Frank Tieri, James Tynion IV, Robert Venditti and Joshua Williamson. Secrets from Metal and the Dark Multiverse will sure to be revealed by this all star team of creators. DC Metal / New Age of DC Heroes will be held Friday at 2:45pm in room 1A21.

In addition, there will be a panel dedicated to The Dark Knight with talent including Tom King, Cully Hamner, Sean Gordon Murphy, Tony Patrick, Scott Snyder and James Tynion IV. This panel will be held Saturday at 1:30 pm in room 1A06.

Our very own Kevin Gunn and Sharna Jahangir will be at NYCC 2017 to report for DarkKnightNews.com!

DC All Access to Broadcast Live from New York Comic Con, Bringing Fans All the Action Straight from the DC Booth!

BURBANK, Calif. (September 26, 2017) – DC Entertainment returns to New York Comic Con with an expansive schedule of panels, talent signings and celebrations highlighting DC’s iconic characters, best-selling titles, and the most acclaimed writers and artists in the industry. Taking place Oct. 5-8 at the Jacob Javits Center, DC’s massive booth in the South Concourse (#1915) will be ­­­the epicenter of New York Comic Con for can’t-miss fan activities, along with must-see costumes and props from the highly anticipated Warner Bros. Pictures film Justice League, never-before-seen items from DC Collectibles and more.

New for NYCC 2017, the DC booth will also serve as home base for DC All Access, DC’s original digital series. Friday through Sunday from 3-5 pm ET, DC All Access will bring fans a packed program of live broadcast segments featuring more up-to-the-minute news, exclusives and talent interviews than ever before! Fans can catch all the action live on the DC Entertainment YouTube channel and on the DC Comics Facebook page.

The DC booth will have everything the superhero fan needs to make their convention experience complete; guaranteed to have fans’ cell phone cameras flashing and social media feeds updating all weekend long, the costumes of Wonder Woman, Batman, Flash, Aquaman and Cyborg from the Warner Bros. Pictures film Justice League will be on display.

Nearby in the hall’s Crystal Palace, attendees will find an in-depth sneak peek of the HTC Vive version of the Justice League VR: Join the League – New York Comic Con Edition, a film-themed virtual reality experience.  Users will be able to use the HTC Vive’s controllers for an enhanced version of the Super Hero simulations.

Always a huge hit with fans, DC’s popular interactive green screen experience returns to DC’s NYCC booth. Throughout the weekend, fans can take home their own photo souvenir from the DC universe, whether they “get their cape on” with DC Super Hero Girls, celebrate the 25th anniversaries of HARLEY QUINN or Batman: The Animated Series, unite with the cast of Justice League to save the world or explore the terrors of the Dark Multiverse with the evil Batmen of DARK NIGHTS: METAL.

For fans of the smash-hit video game Injustice 2, Warner Bros. Interactive Entertainment will have demo stations in the booth to test their fighting game prowess. And no convention experience is complete without plenty of giveaway items to fill up that swag bag! DC will provide fans with plenty of free sampler comic books and catalogs, posters, pins, temporary tattoos, masks and more!

New products spotlighting the Justice League film, Batman and DC Super Hero Girls will be seen for the very first time at NYCC, courtesy of Warner Bros. Consumer Products. It’s a sure bet that any fan will want them for their very own, so DC’s giving them a chance to enter a sweepstakes in the booth to win all of the items on display.

DC’s panels will dive into acclaimed new titles, reveal exciting announcements and showcase some of the most celebrated talent in comics:

Graphitti Designs will once again carry highly collectible, exclusive variant comic books available for NYCC attendees only, both in the DC booth and their own booth in the main exhibit hall (Booth #1744).

Check out the DC All Access mobile app for a complete list of panels, a schedule of signings, behind-the-scenes coverage and in-depth interviews directly from DC All Access. The app is available as a free download at the Apple App Store or the Google Play Store.