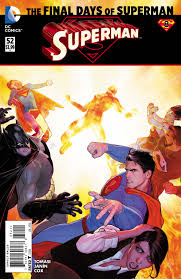 “The Final Days of Superman” crossover comes to a close this week and, much like Justice League #50, is another title that should be read before jumping into DC Universe: Rebirth #1. You have to admit the death of Superman is pretty important event.  And no, that’s not a spoiler because we’ve all known this was coming since the first week of April.

Part of me wonders if this issue should have been allotted a higher page count because the demise of an icon demands more attention and what’s contained within mostly consists of a slugfest between Superman and his impostor. There’s not much in the way of actual storytelling, although Mikel Janin’s top notch artwork provides a bright spot, quite literally – this may be the brightest, most sun-colored comic you will ever see.

A bit of fan service is to be had when the likes of Batman, Supergirl, Wonder Woman, and even Pre-Flashpoint Superman get a piece of the action. Unfortunately, the latter hero says stuff akin to “I’ll answer your questions later.” By that, I think he means Superman: Rebirth #1.

On the positive side, the ultimate sacrifice is made in true Superman fashion and we wouldn’t expect anything less.  While we do see how the world reacts – albeit quite succinctly – they won’t have much time to mourn as Pre-Flashpoint Superman is set to swiftly take his place. I do hope someone takes time to show how those closest to New 52 Superman were affected by his passing without rehashing what happened in the ’90s.

I’m aware that some things I’ve said in this review may come off as contradictory. Why should you read something I’ve deemed less than perfect? Superman dies. It’s that simple.

Let’s just say that I expect many questions to be answered this June within the pages of Superman: Rebirth #1 and Superman #1. I can tell you those are but a few of my must reads for June.