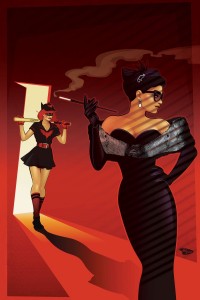 This has to be one of my favorite new titles from DC. I’ve always been a fan of books that can take familiar characters, while still remaining true to who they are at their core, and placing them in drastically different worlds. Marguerite Bennett and her all-star team of artists consistently deliver that in spades.

We open with Aquawoman/Mera who is quite the bad ass. Do you remember how awesome Aquaman was in Justice League: Origin? That’s kind of what we get here, only with a more light-hearted feel. I also enjoyed the scenes that involved her interacting with the servicemen; she almost has a celebrity status with them, yet treats them like family.

We are also treated to another enthralling covert adventure starring Batwoman that not only has an interesting way of introducing Huntress, but also teaches us to never underestimate the power of swing music. Although Batwoman’s use of baseball equipment as weaponry is entertaining, it reminds me of Pro Stars, a cartoon from the early 1990’s that saw Wayne Gretzky, Bo Jackson, and Michael Jordan fight crime using their respective sporting equipment (see the video embedded at the bottom of this review for proof that it actually existed).

Cameos by the likes of Wonder Woman, Harley Quinn, and Poison Ivy can also be found before the book closes with a scene featuring Zatanna and John Constantine, who happens to be a talking bunny. I’m interested to see where those characters end up and can only wonder where the cliffhanger will lead us.

I strongly recommend this to anyone looking for a great alternate universe book that’s more radically different than the stuff you can find even in an Earth 2 comic. It may be just me, but I’m getting the impression that all paths will soon converge in a huge way, so jump aboard the ride and strap yourself in.