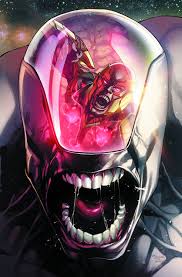 This book really took me by surprise. I have to admit that I thought it was something that I wouldn’t get into, yet found myself enjoying it very much. Let that be a lesson to everybody to never be afraid to try a new book.

Spinning out of Convergence, this issue follows Telos (well, obviously) as he and a band of ragtag heroes go up against Validus, one of the biggest bruisers in the DC Universe. While not familiar to every reader, rest assured that anyone remotely familiar with the exploits of the Legion of Super-Heroes knows of this brute.

Their throwdown is quite spectacular. My mind tried to picture how Telos would put his powers, which happen to be pretty damn cool, to use. I imagine it would somewhat resemble the opening scene of the film X-Men: Days of Future Past.

It’s worth mentioning that the story is set on Colu, which readers should recognize as the home world of Brainiac. It was a treat to get some insight into their history and culture. Brainiac himself actually appears in the book but not too much.

This unexpectedly awesome addition to DC’s fall slate is recommended for those who enjoy Green Lantern comics or ones in which Superman gets into cosmic adventures far from Earth’s orbit. Jeff King and company put forth a solid effort, so I can only hope that enough curious comic book fans take a chance on this title.