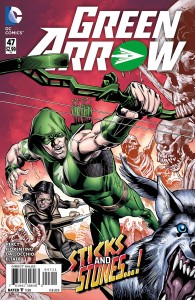 While the Green Arrow of the comic is quite a different beast than that of the one seen on TV, I can’t help but hear Stephen Amell’s voice when reading for the character these days. It certainly helps that DC has somewhat synced up the two versions of Oliver Queen when it comes to costume choices, or at least it appears that way.

We join Oliver after he has been betrayed by Tarantula and thrown into a dungeon. Most unfortunate for him, Jefe plans to sacrifice him to Ah Puch, the Mayan death god.

On that note, we get a bit of backstory regarding Jefe: who he is, how he came to be, and why he commits human sacrifices to save his terminally ill son. It’s not the greatest way to create a grey villain, but it works well enough here.

Things do end up going in our hero’s favor as Tarantula experiences a change of heart and saves him, teaching him what “I’m sorry” tastes like. The resulting conclusion is much like that of a horror movie with a bittersweet ending.

This is a rather straightforward read but still rather enjoyable. The writing and artwork are good enough to get the job done. This issue somewhat hearkens back to the tone of Ann Nocenti’s run, yet is a bit better.