SATIRE: Sascha The Dog Cast As ‘Ace The Bathound’ 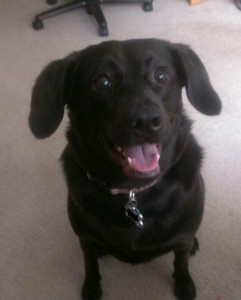 We’ve really sniffed out a big one, DKN readers! Scoops don’t get any bigger than this! I can confirm that my dog, Sascha, has signed a six picture deal to play Ace The Bathound. The feisty canine will first appear in a pivotal role in Batman v Superman: Dawn of Justice before taking a bite out of Justice League. A solo film is more than likely because the character is sure to be a hit with both casual moviegoers and die hard comic book fans.

A casting director saw me walking her one day and thought she had “Hollywood good looks and a sense of tenacity required in cleaning up the streets of Gotham.” I guess living in the area the film is shooting in has its rewards. Had the film shot anywhere else, I’m not sure we would have been so fortunate.

A source close to Warner Bros. said the following:

The reason for pushing Batman v Superman from 2015 to 2016 had everything to do with the inclusion of Bathound. Chris Terrio completely rewrote the script so the pooch would have a huge role; think of how Superman III was written around Richard Pryor. The filmmakers really feel they have captured lightning in a bottle with this casting coup. Ace will be introduced by expressing displeasure in how the world engine destroyed so many buried bones and chew toys in Metropolis in the previous film.

Could Air Bud as Krypto The Superdog be far behind?

In all seriousness folks, I wrote this article in hopes of making people think twice about what they read on the internet these days. Too many bogus “exclusives” and “scoops” are being written with the goal of reaping ad money from all the clicks you give them, nothing more. When certain websites post Photoshopped pictures of magazine covers, tell you Bryan Cranston has been confirmed as playing Lex Luthor for six pictures, or that Josh Holloway will be announced as Aquaman “any day now” (that was five months ago), you should probably catch on to their penchant for lying and stop paying attention to them. It’s also more than likely that Emily Blunt isn’t f’n playing Catwoman. If the majority of credible websites aren’t posting it, or if Warner Bros. or major trades like Variety, The Hollwood Reporter, or Deadline aren’t backing it up, it probably isn’t true. Use your better judgment and enjoy Batman v Superman despite the multitude of characters that WON’T be appearing in it.

What ‘The Flash’ Movie Could Mean for Live...