This is the first Fan Roundtable and it would be great to see different views and opinions on the subject matter of TV Spot #2.  TV Spot #2 showed some interesting new footage of The Dark Knight Rises. I had a conversation with a DKN Fan: Phillip Heath on his thoughts of TV Spot #2:

Dark Knight News (DKN): LOVE IT! I screamed when I saw it on Modern Family. Catwoman on my 22in TV was amazing. She is going to steal the show. I think i have watched this one like 20x on youtube. You, Phillip?

PH: Ummm, the smoke and hidden destruction of the Gotham Skyline said it all at the end of the commercial, Bane looked huge and all these scenes from the trailers and spots, you can just point out all the IMAX scenes.

But I dont get everyone’s confusion of Catwoman, I think she’s somewhat thankful to Bane for breaking her out but then realizes he’s more into the destruction of Gotham, causing mental and physical pain on Batman, maybe she finds out Bruce is Batman and goes on his side.

I think obviously the backbreaking moment happens within the 30-45 min mark of the film, Bane lets Bruce live only for him to maybe witness but for sure that he’s destroying Gotham, everything Batman and Harvey Dent did is destroyed, the dirt poor people who suffered from crime in the city rise to a new leader in Bane, Bane lets Bruce rot in depression but he really wants him to gain his strength and spirit back, climb out of the prison (hole) as a test, then come see what Gotham is now, Bane wants to fight him and destroy him in front of thousands of people instead of doing it again in the Batcave, just a thought, that’s what I get from the whole Bruce in lockdown theme.  In a way Bane is playing Man’s Most Dangerous Game, and he’s been planning it for 8 yrs.

DKN:  Hey Phillip! Do you mean The Most Dangerous Game where man is being hunted?

(PH): Yeah, but that game also means Man is the hardest thing to kill, killing Batman in front of nobody in the Batcave would’ve been “lame” you break his body and spirit, let him come back with him knowing his city is ruined and turned against him, fight Batman in front of all of Gotham, defeat me in front of everybody, thats the game Bane is maybe playing

As for Catwoman, she is someone who will change sides if it benefits her best when it is morally, financially, or beneficial to her. She has her own moral codes and guidelines she follows that is not based upon villainy or heroism. She is at best an anti-hero who is neither hero nor villain. She is the grey between darkness and light. That is why she is so puurfecct!

For some on this site, I have discussed this topic with you on what we thought about how Bane will take over and when will Bane break Batman’s back. We even discussed the use of Gotham citizens in the movie and how they will be used in the movie. I liked the  that Heath referenced to The Most Dangerous Game and expanded more on the subject of what the story was about. The Most Dangerous Game is when man turns from being a hunter to becoming the hunted by his fellow man, in which the hunter becomes the prey and his fellow man has all the advantages. This is similar to Bane who has rallied followers for a guerilla warfare, where there are no limitations to how far they will go to fight. Plus, Bane has the upper hand because he knows the identity of Batman and where the Batcave is. Bane as the hunter has tracked his prey (Batman) to his habitat and ambushed him. For Batman, who has become the prey (the persecuted)  in Gotham City (his own habitat). He will have to push himself to the breaking point of his own limitations and moral codes to defeat Bane. So, when Batman says “Not everything, not yet.” This is his admission to go beyond his limitations. The Most Dangerous Game has some inclination to The Dark Knight Rises. If you have read the story by Richard Connell it is a story that leaves you speechless.

I think that the showdown between Bane and Batman will be secluded because we continuously see from the photo stills that the two are found near a sewage line. I think that they will fight underground where the water is because Bane might be doing something similar to the League of Shadows. Where Bane’s plot might be to drug the water line or it might be where the seismic destruction device “Gotham’s Liberation” will destroy the foundation of buildings.

Comment below or on DKN Facebook  on the Roundtable discussion about Bane as the hunter and Batman as the prey. Do you think Richard Connell’s short story, The Most Dangerous Game, relates to The Dark Knight Rises? What are your views on Catwoman and her switching sides? Do you think the showdown between Bane and Batman will be in front of everyone or somewhere secluded? Will follow in League of Shadows footsteps or go his own “Gotham Liberation?”  Should I continue DKN: Fan Roundtable? Your feedback helps with the up keep and the continuation of the site. Also, we are trying to make the site a little bit more original to our name.  Thanks for being awesome! 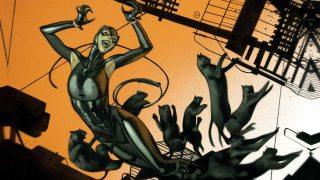