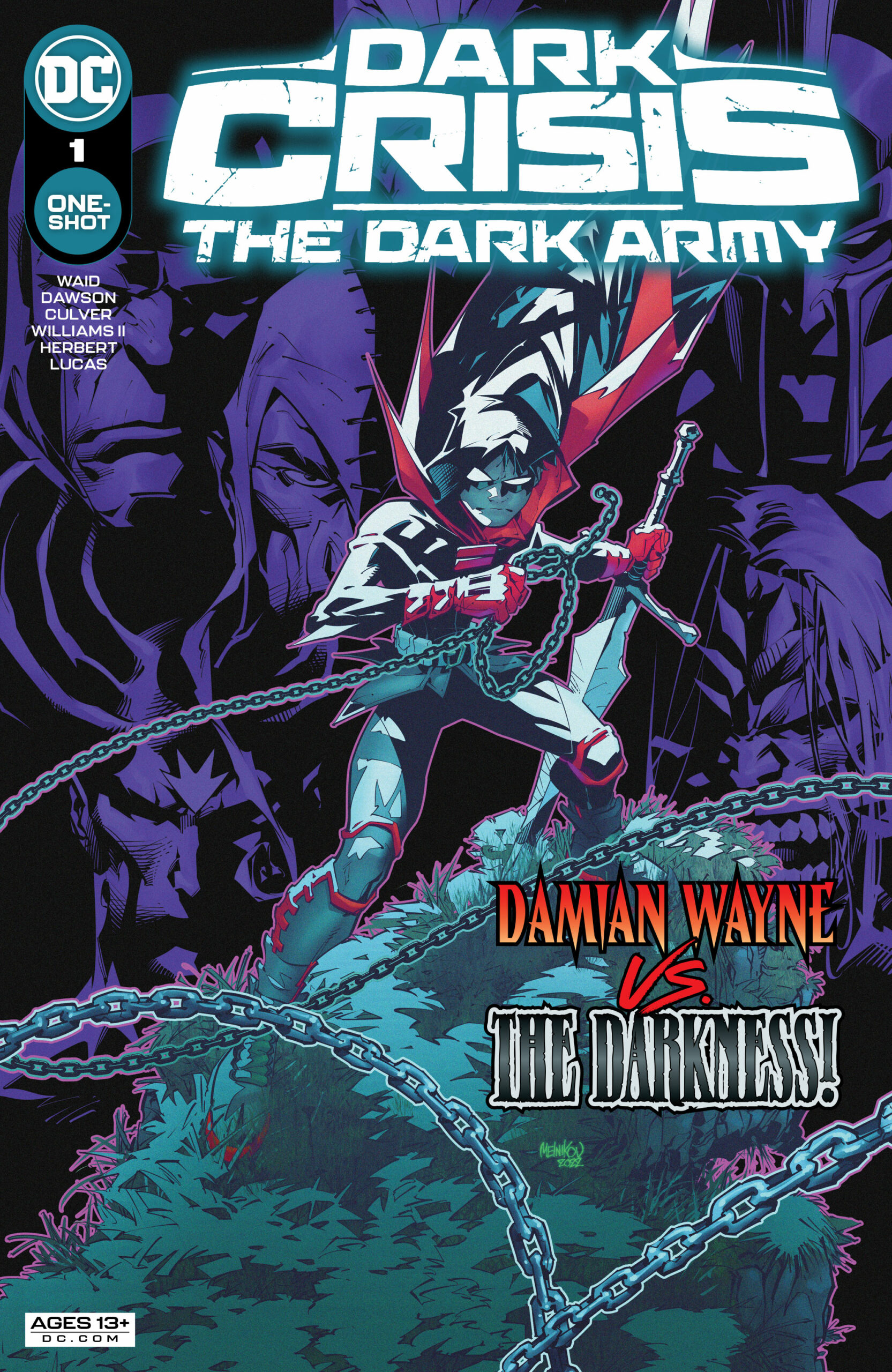 Robin and a rag-tag team of heroes hop dimensions, in a last-ditch effort to save the Multiverse, in Dark Crisis: The Dark Army #1.

Infinite universes are in peril. Pariah and the Great Darkness have succeeded in their plan to reconstruct the original Multiverse; however, Pariah’s newly minted “Franken-verse” (copyright pending) isn’t exactly stable. For Pariah’s creation to flourish, Earth-0 must first be destroyed, which brings us to the issue at hand. 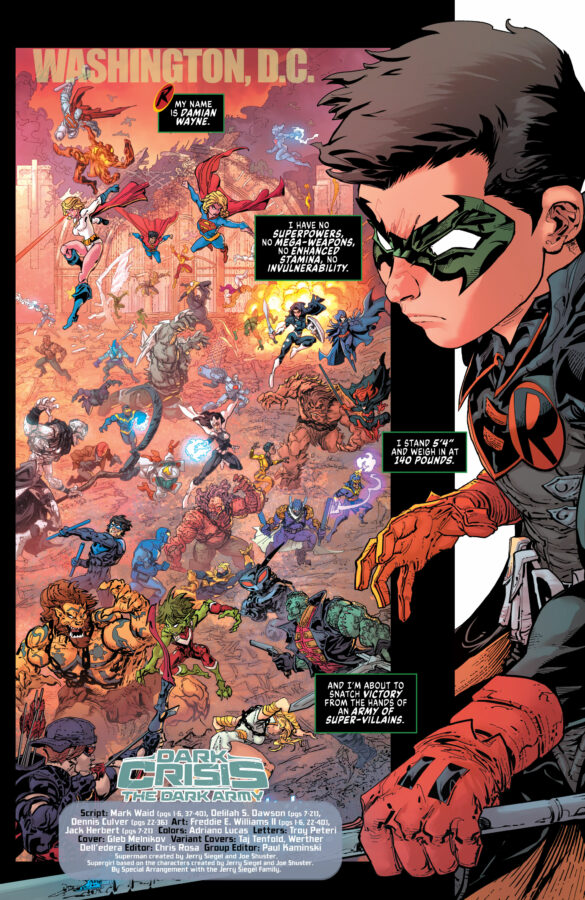 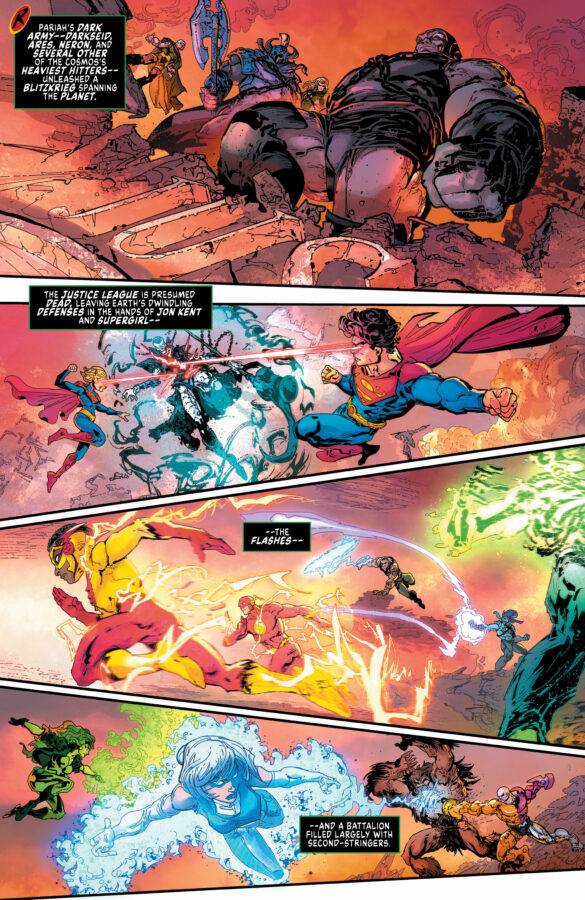 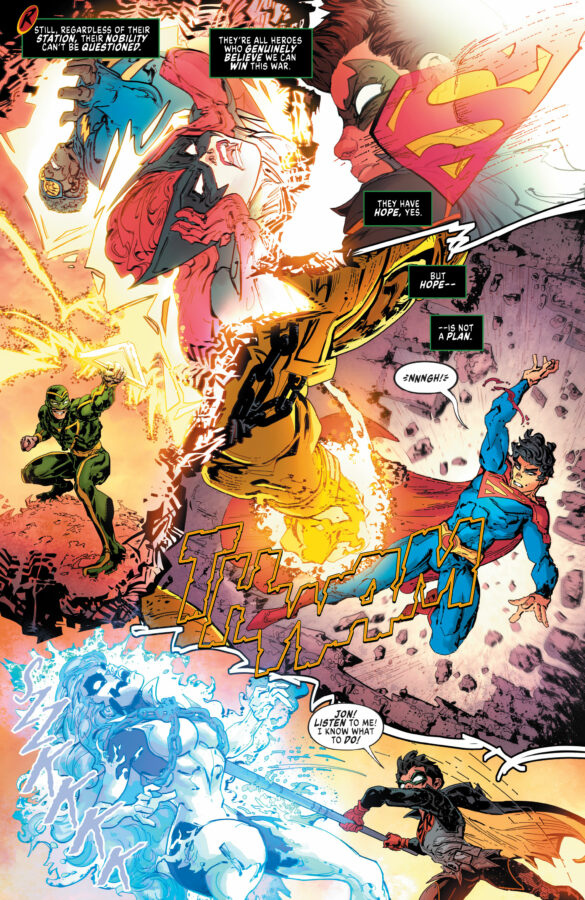 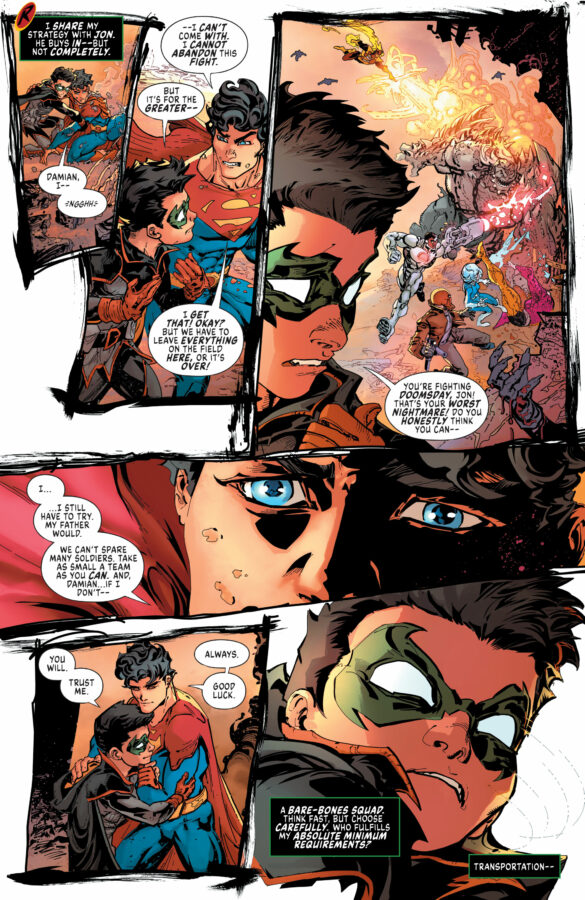 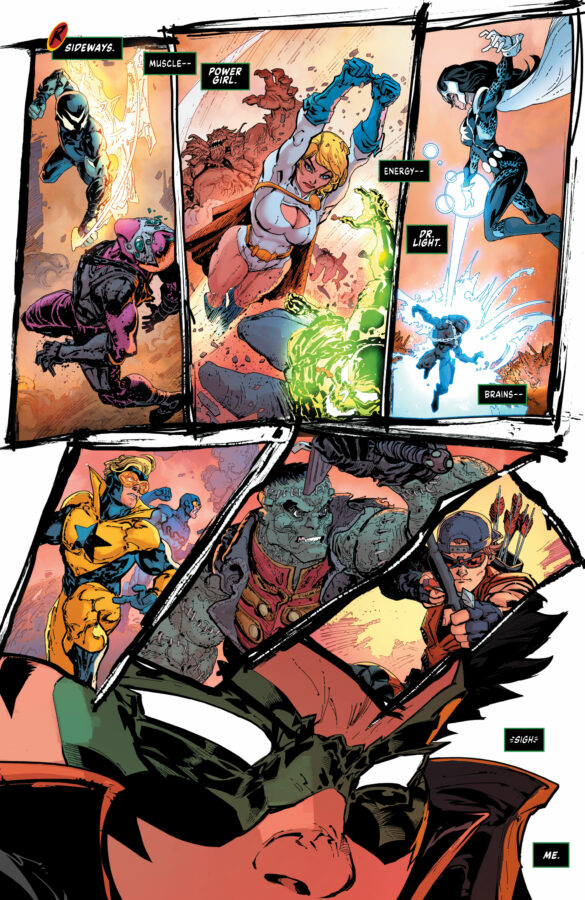 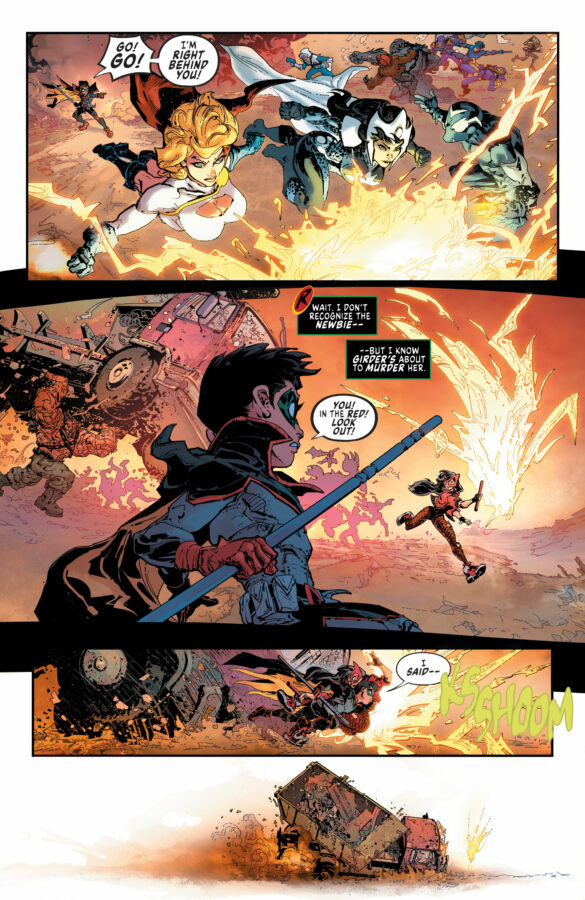 Dark Crisis: The Dark Army #1 opens with the war for Earth-0 in full swing. Pariah’s forces consist of some of DC’s A-tier villains, such as Darkseid and Doomsday. In contrast, Earth-0’s defenders are comprised of the B and C list second-stringers, as the Justice League is still presumed dead (they’re not really, though, see Dark Crisis on Infinite Earths #6).

Fear not citizens! Amid the mayhem and destruction, Damian Wayne has a plan. With the blessing of his long-time friend Jon Kent (Superboy turned Superman), Robin grabs the first four heroes he can find and whisks them off on a Multiverse-spanning side quest.

The Light Shines in the Darkness… and Everyone is Still Confused

Comic book events are weird. They require tons of editorial and logistical planning due to the size and scope of the story. Often there’s the impulse to maximize production and profit, hence the mass production of tie-in issues. Sometimes, like in the case of Death Metal, these tie-in issues can be even better than the main story. Other times, they are a waste of paper and ink. Unfortunately, Dark Crisis: The Dark Army #1 is closer to the latter than the former, in this reviewer’s humble opinion.

While it’s not an utter waste of time, the issue suffers from a clear lack of purpose. The story opens with Damian fighting the Dark Army and then suddenly stating that he has a plan… but he never actually articulates what said plan actually entails. Robin never explains his goal or the impetus for this mission. He just rounds up a pose and rolls out.

Yes – things are accomplished that do somewhat alter the current status of the war against the Great Darkness, but these accomplishments were incidental. It’s clear they were never the intention of the mission. For example, we’re introduced to a new character: Red Canary. Why? I dunno (insert shrug emoji here). Damian randomly saves her, and the next thing we know, she is on a mission with a nameless task.

Granted, some of what’s going on in this issue is pretty cool. There are a ton of throwbacks to the original Crisis on Infinite Earths; Doctor Light and Power Girl both play pivotal roles in this issue, our heroes revisit important locations from the original Crisis, recasting these settings in a new light for the current ongoing Crisis event. All of this is fine and dandy, but by the end of the issue, I was left scratching my head, scrounging reasons to justify the existence of this tie-in.

Aesthetically, Dark Crisis: The Dark Army is all over the place. With three different writers and two different artists, this issue lacks any sense of artistic cohesion. It’s a hodge-podge, mish-mash of aesthetics and voices that lend to a very disjointed reading experience.  For example, Damian Wayne’s voice and appearance shift multiple times throughout the issue.

For starters, Damian’s shtick is that he’s an arrogant 14-year-old brat with a heart of gold. When the issue opens, Mark Waid is scripting, and Damain’s voice is spot-on. However, as the issue cycles through two other writers, Damain’s voice changes, becoming more generic and less distinct. His arrogance is apparent, but he stops sounding like a teenager and starts talking a like your average superhero.

Then there’s Damian’s visual treatment. When Freddie E. Williams II draws Robin, he looks like a 14-year-old boy, but when Frank Herbert takes the wheel, he suddenly grows two feet taller. He’s no longer a scrawny teenager but a [email protected]$$ man… that is, until Williams once again takes over at the end of the issue, and Damian becomes a teenage boy, once again. 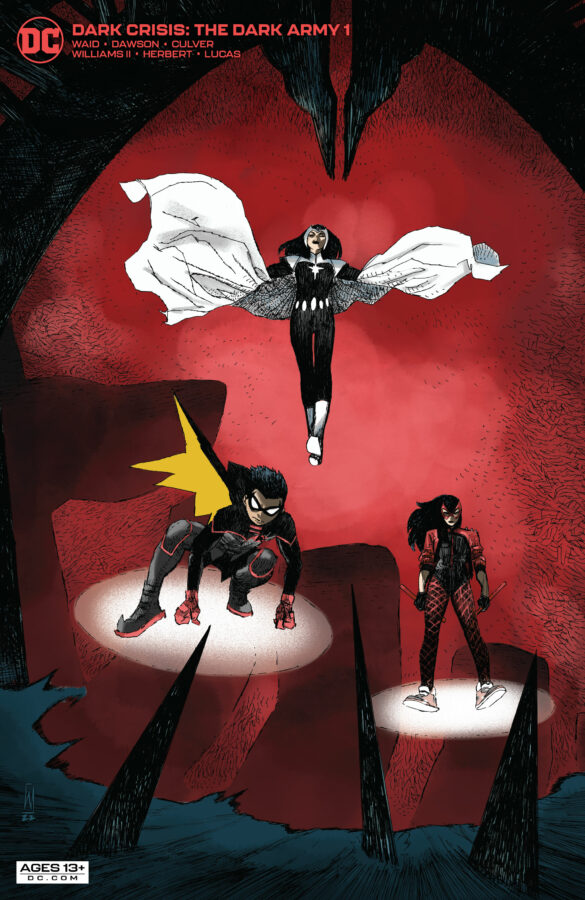 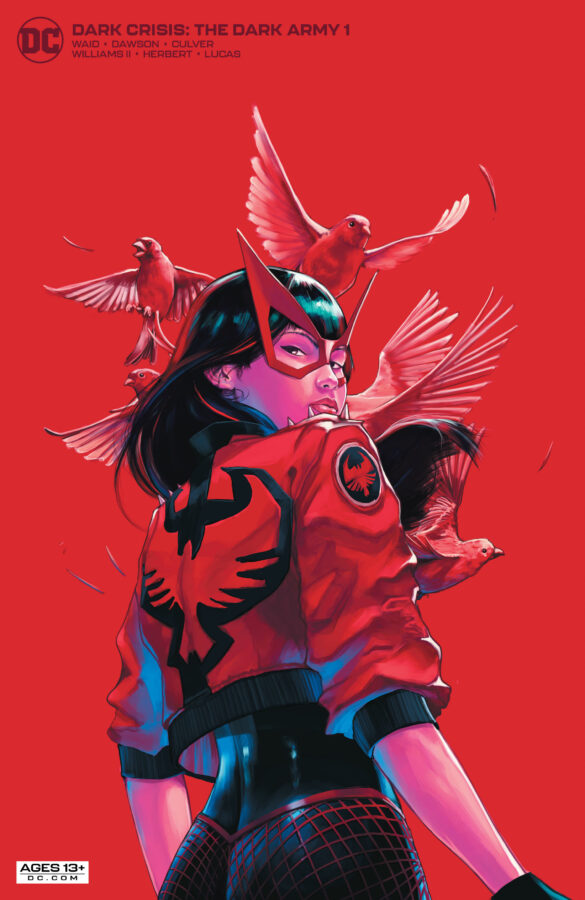 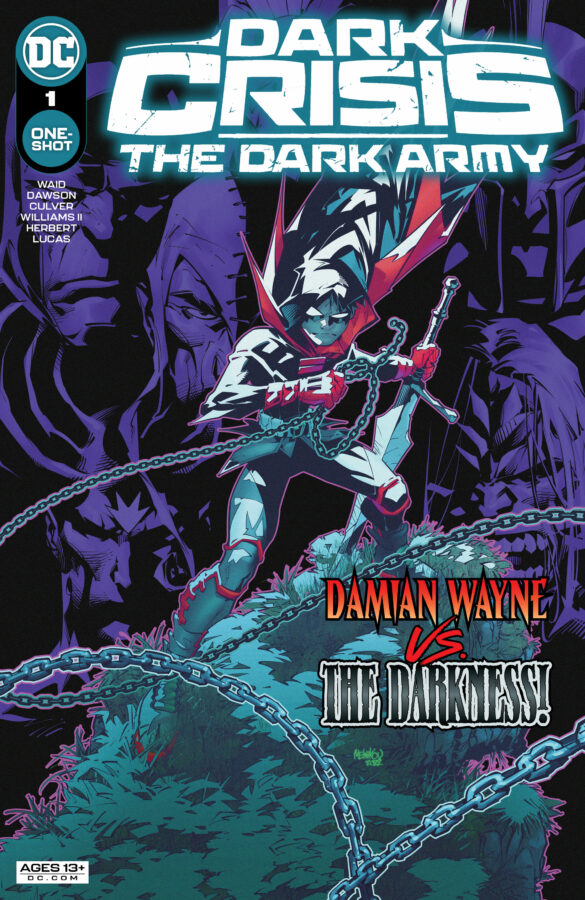 Dark Crisis: The Dark Army #1 is, in my humble opinion, a hot mess of an issue. For some, this will be a nostalgia-laced dance through the Crises of yesteryear, but any attempt at objectivity will expose some real problems with the issue.

Despite having an impressive creative team, this issue suffers from having “too many cooks in the kitchen”. No one seems to be on the same page, and it feels like no one knows why they were commissioned to make this title in the first place.

Final Verdict: I promise if you skip this one, you won’t miss a thing.