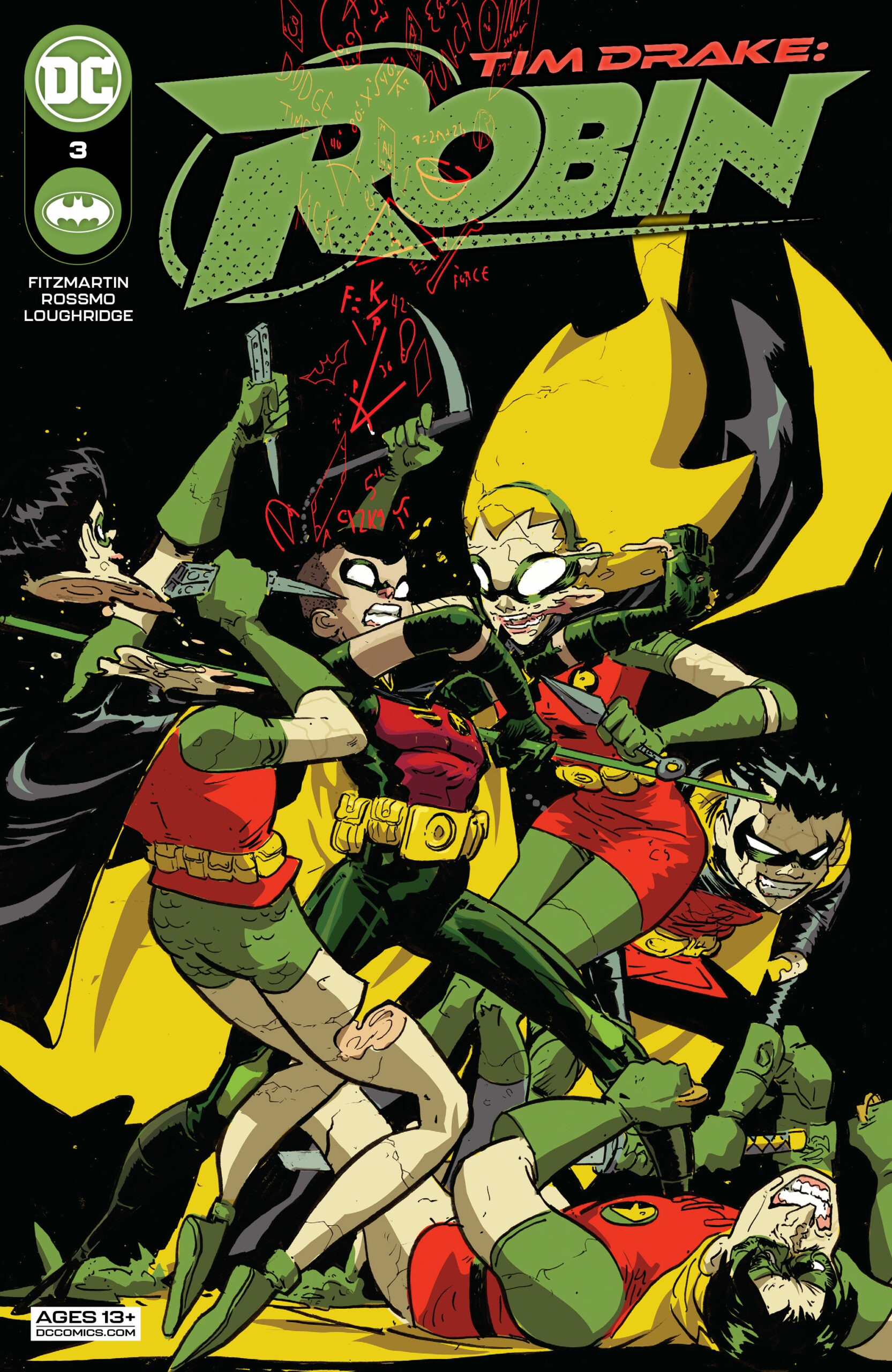 The last issue ended with a tantalizing cliffhanger and Tim Drake: Robin #3 duly delivers on the promise, serving up a full eleven pages of Tim fighting the four previous incarnations of Robin.

It makes perfect sense – if this series features Tim’s journey towards accepting where he finds himself right now in his life, the first step is to remind himself of why he’s different from the other Robins so that he can defeat them. Neat trick, huh? It’s a battle that manages to keep a grip on the characters, builds intrigue (you’re wondering what the hell’s going on), and utilizes Tim’s new home on the marina effectively. It’s a shame then, that he comes away from this encounter disturbed by the way he identified his colleagues’/friends’ weaknesses. The self-doubt that is in the margins of Tim’s personality is always waiting to spoil the party it seems. 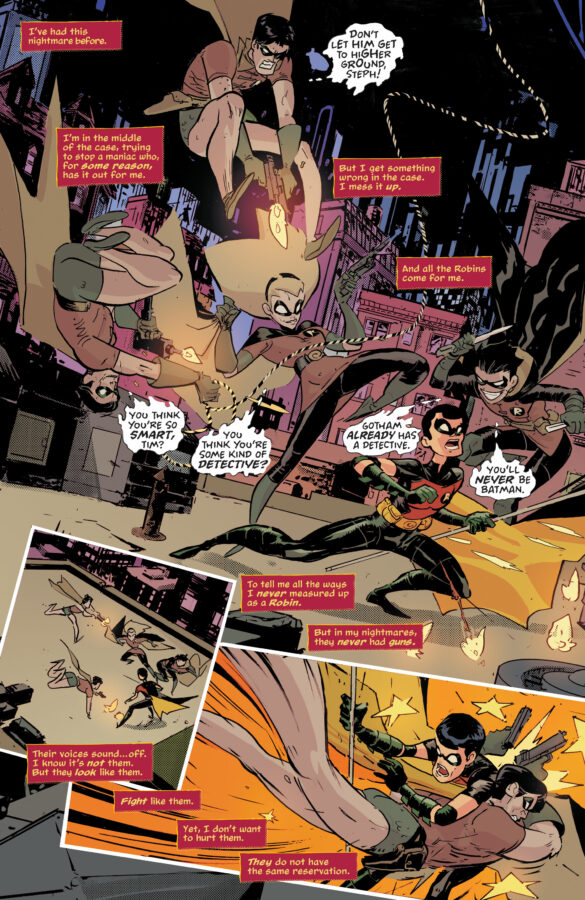 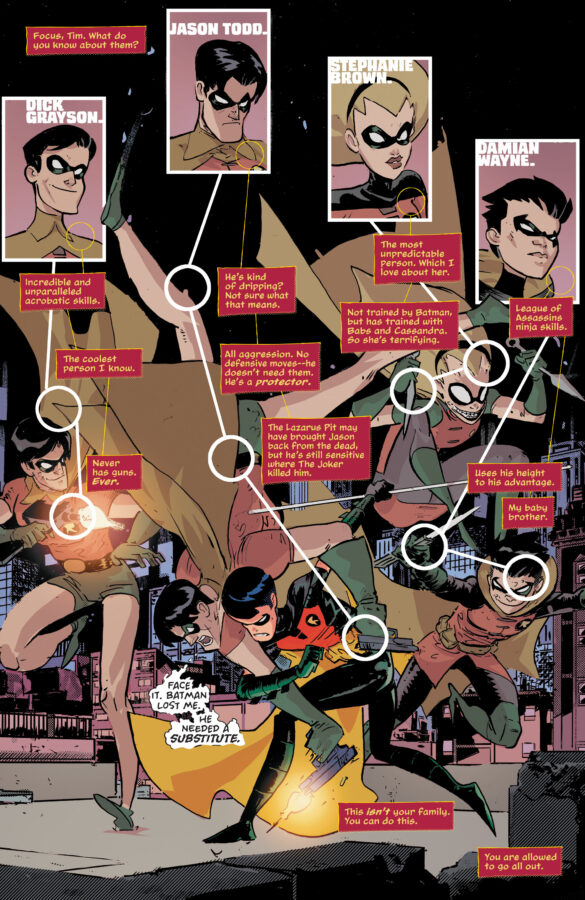 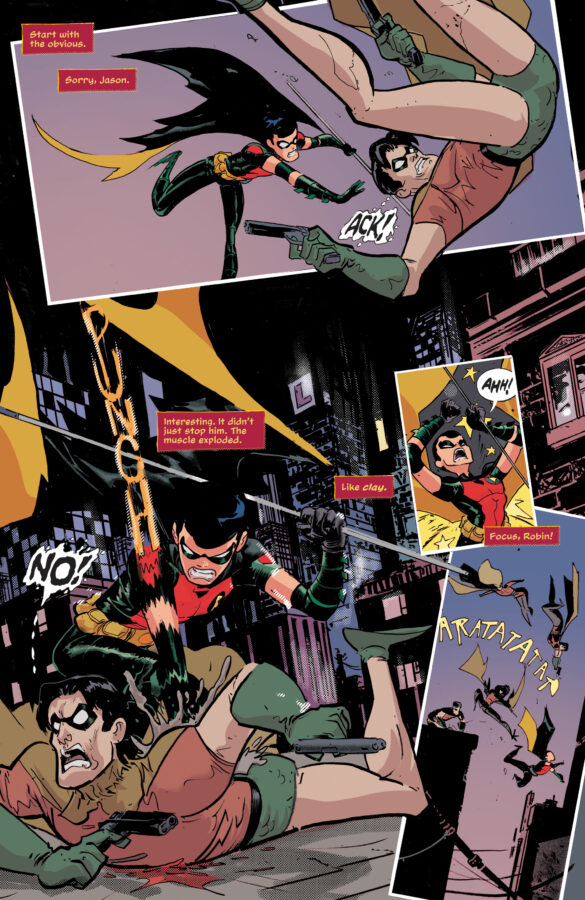 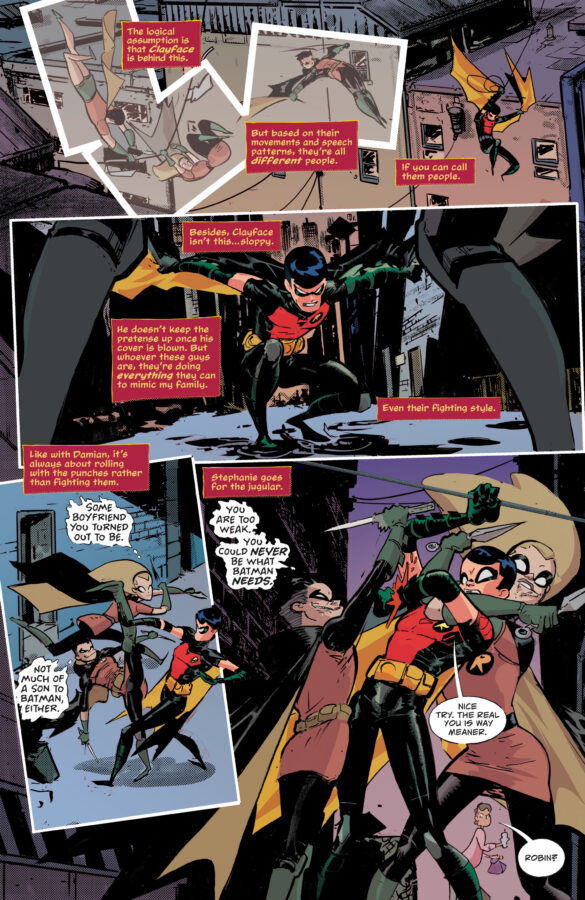 Just as the battle with the Robins gives him perspective on what he contributes to the role, there follows a scene where Tim, still dressed as Robin, meets his boyfriend, Bernard Dowd, who talks candidly about the relationship. Ah, that age-old superhero troupe of someone not recognizing their loved one purely because they’re wearing an eye mask.

Is this still a cute superhero trope that we all have to develop a blind spot for, or is it something we should leave behind? Either way, the meeting serves a purpose for both character and plot as it throws up a tiny nugget of further intrigue which ties into the way they got together during the Children of Dionysus storyline in Batman: Urban Legends. It’s a sign that writer Meghan Fitzmartin is slowly drawing on the past for the current storyline – maybe this fresh, clean-slate start isn’t going to be exactly that for Tim.

The main plot is getting more attention here without the murder-mystery incidents we got in the previous two issues. The identity of the main villain’s the main pull and it’s undeniably intriguing when a character teasingly says to Robin “You have all the clues”.

With just over half the issue taken up with action, Riley Rossmo’s idiosyncratic art is in the spotlight. The jauntily angled panels and curvy flow of the figures keep us turning the pages. Rather than bone-crunching power, Rossmo presents us with a bendy swirl of limbs that befits the nimble-footed acrobatics of the Robins. 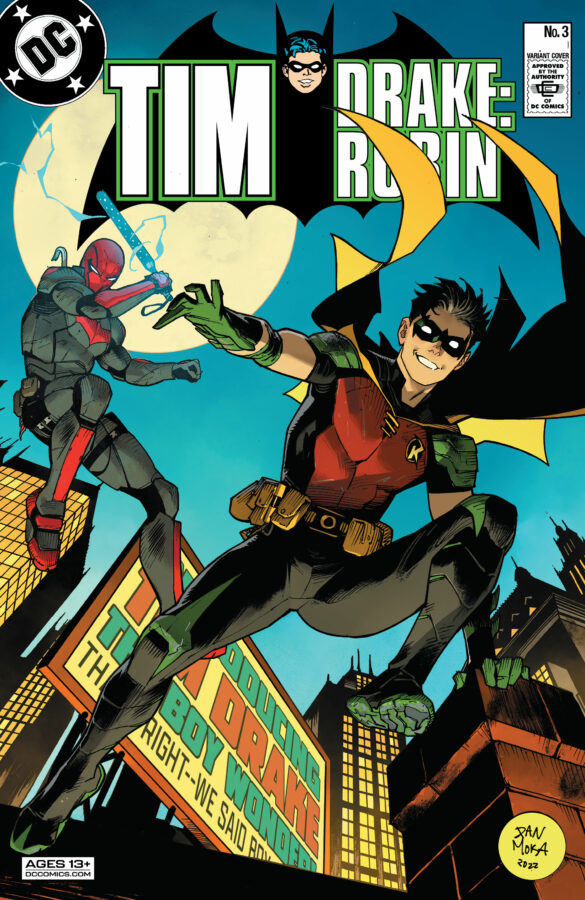 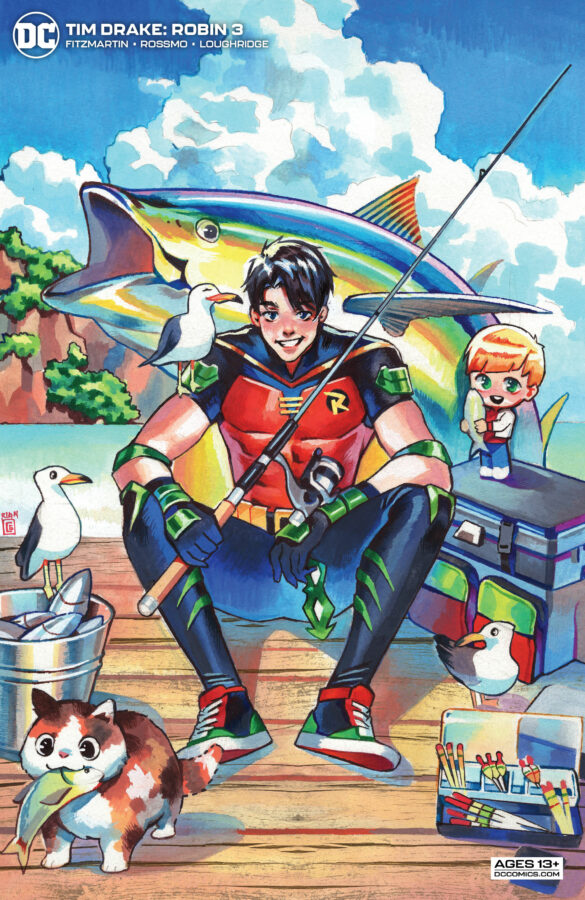 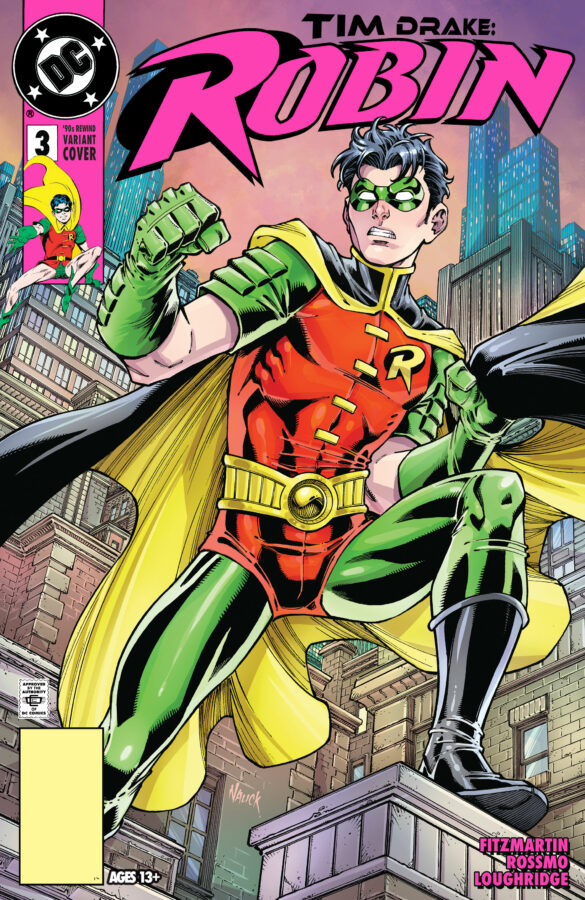 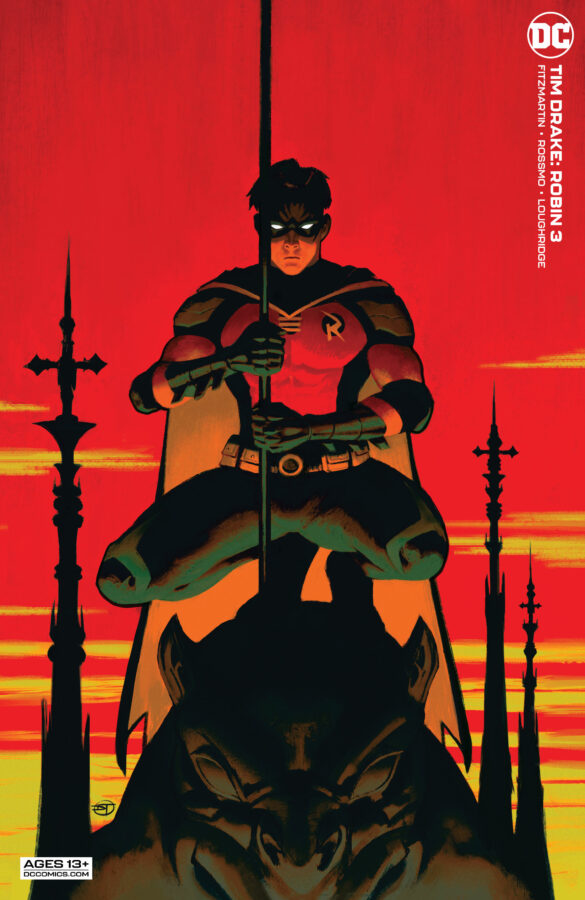 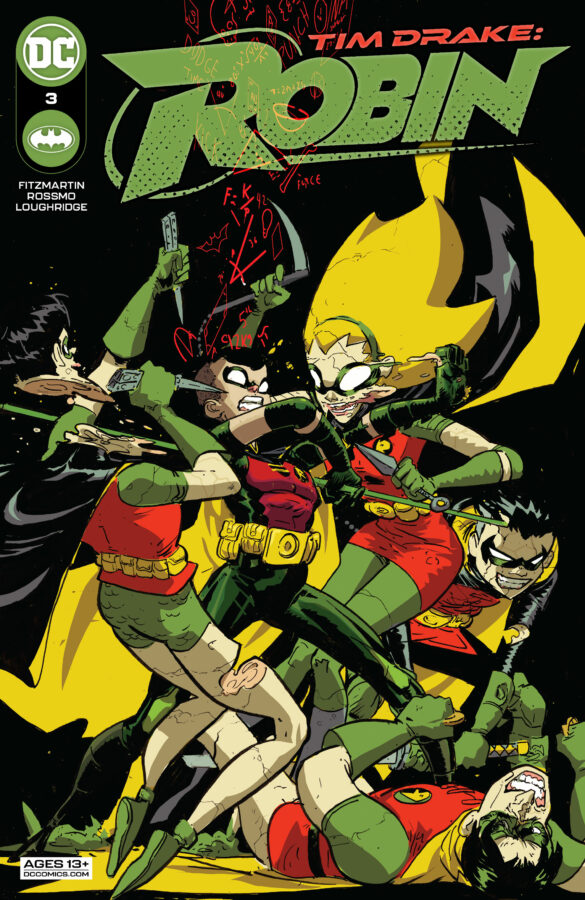 This issue also keeps the violence lighter. The tone of the comic has generally see-sawed, mixing almost slapstick melodrama with violent murder, but in this issue, it feels a little more consistent, leaning more towards the light-hearted. So, while the Robins arrive firing guns and wielding knives, a bystander improbably tries to talk to Tim, whilst in mid-battle providing him with an opportunity to protect her. Another bystander caught up in the action yells “I promise I’ll never pee on the marina again!” Rossmo makes it all work.

Tim Drake: Robin #3 is probably the issue that’s best balanced. We get a nimble, acrobatic-based action sequence, a relationship conversation that also has an added layer of intrigue, and then the raising of the villain plot. In a series that has felt more teen-targeted than young adult, this is an issue that feels more focused, maybe because Drake’s getting more focused himself.